The research division of the Anthology Marketing Group conducted two statewide polls for Hawaii Business Magazine in October and November: The BOSS Survey of 413 local business owners and senior executives, and the 808 Poll of 502 members of the general public. Here’s what we learned.

These surveys also provide a better idea of what the general public, the business community and the tourism industry foresee as the road ahead.

We’ll start with the future and then return to the present.

The BOSS Survey’s Optimism Index is based on questions about what business leaders think about Hawai‘i’s economic near-future: Will the overall local economy get better, worse or stay the same in the coming year?

The BOSS Survey began in 1998 with the index at 100; in 23 years of BOSS Surveys, the April 2020 survey was only the third time the index had fallen below 100. Both previous times were in the depths of the Great Recession. As you can see the index has bounced up in the latest survey but remains well below 100.

The BOSS Survey asked 413 business leaders: Which of these three statements comes closest to your feelings about the economic outlook for Hawai‘i in the next year? Here are the answers for companies in the visitor industry and all other companies.

We also asked a more personal question: How confident are you that your company will survive the next three years?

Of course, if your company is already out of business, you are not available to answer this question about the next three years. The fear of going out of business is clearly higher in the tourism industry than other local industries.

What best describes your company’s spending plans for the next year? 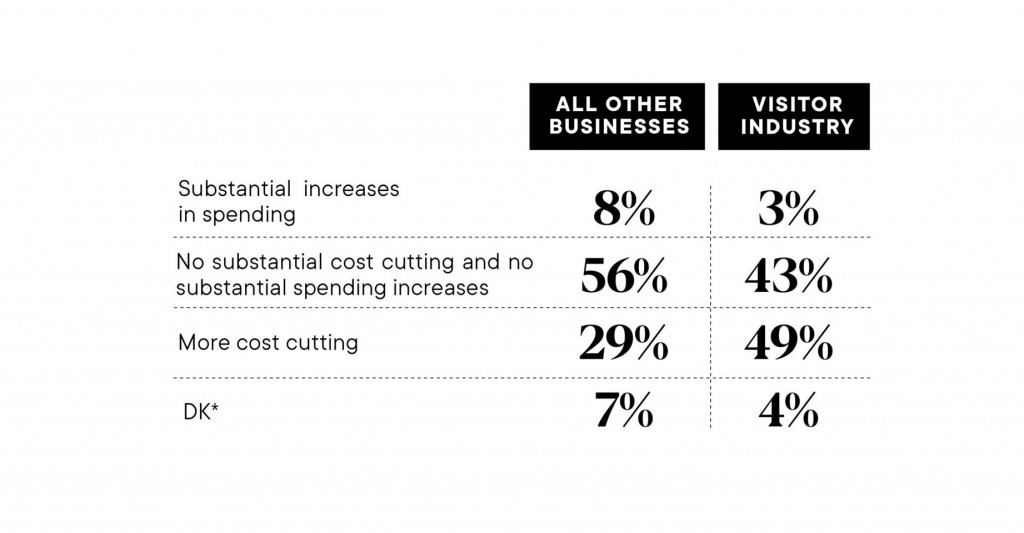 In both surveys, we asked respondents to estimate when they believe the local economy will recover to a level comparable to 2019. 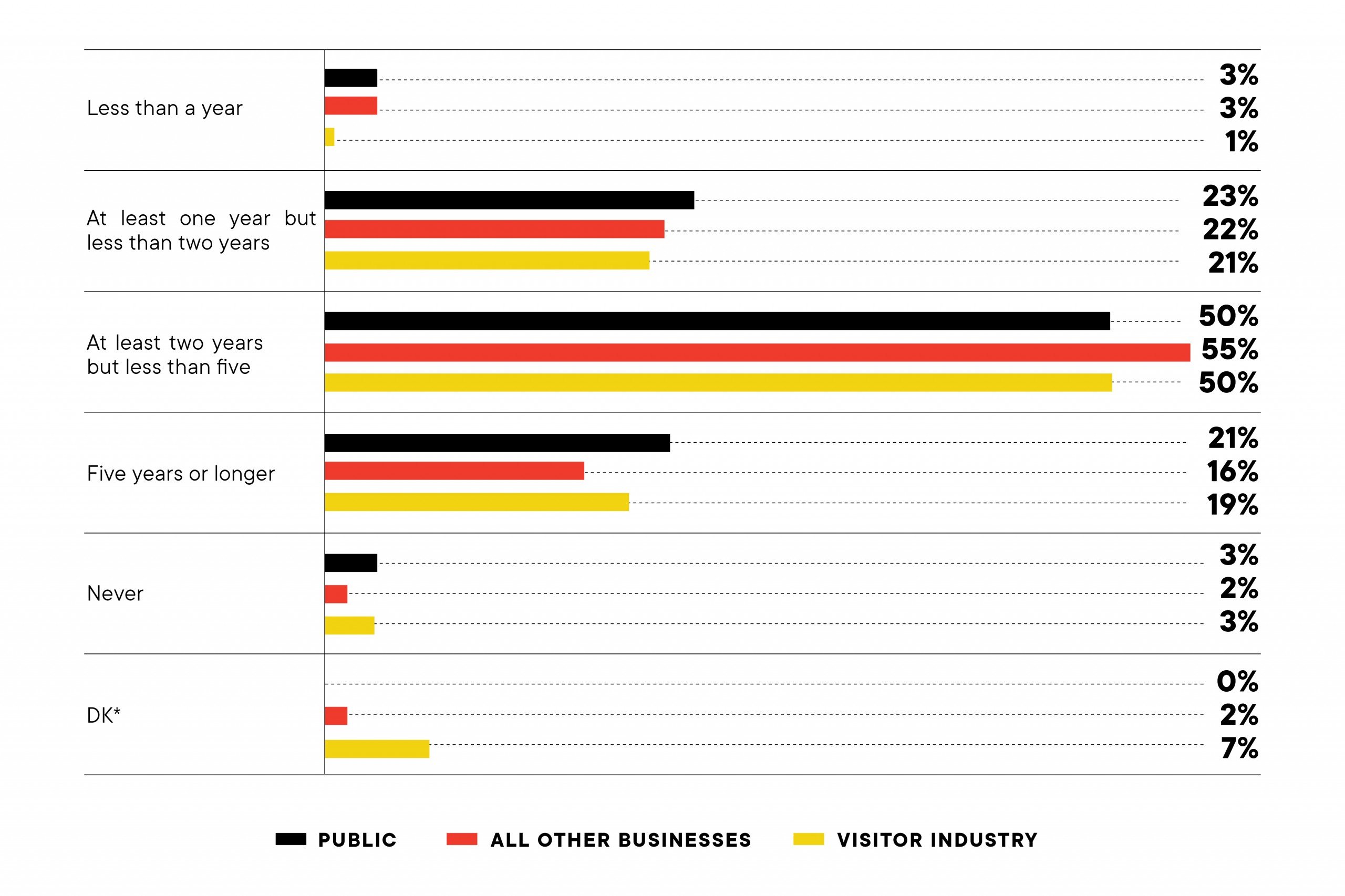 Let’s further compare the responses of businesses leaders to the general public. Respondents in both surveys were told Hawai‘i had about 10.4 million visitors in 2019 and DBEDT, the state Department of Business, Economic Development and Tourism, forecasts that Hawai‘i will have about 2.9 million visitors this year.

Respondents were then given a series of forecasts about the total number of visitors that Hawai‘i will have in 2021 and asked: Which scenario do you think is most likely? The business respondents were divided into those who are in the visitor industry and those who are not. 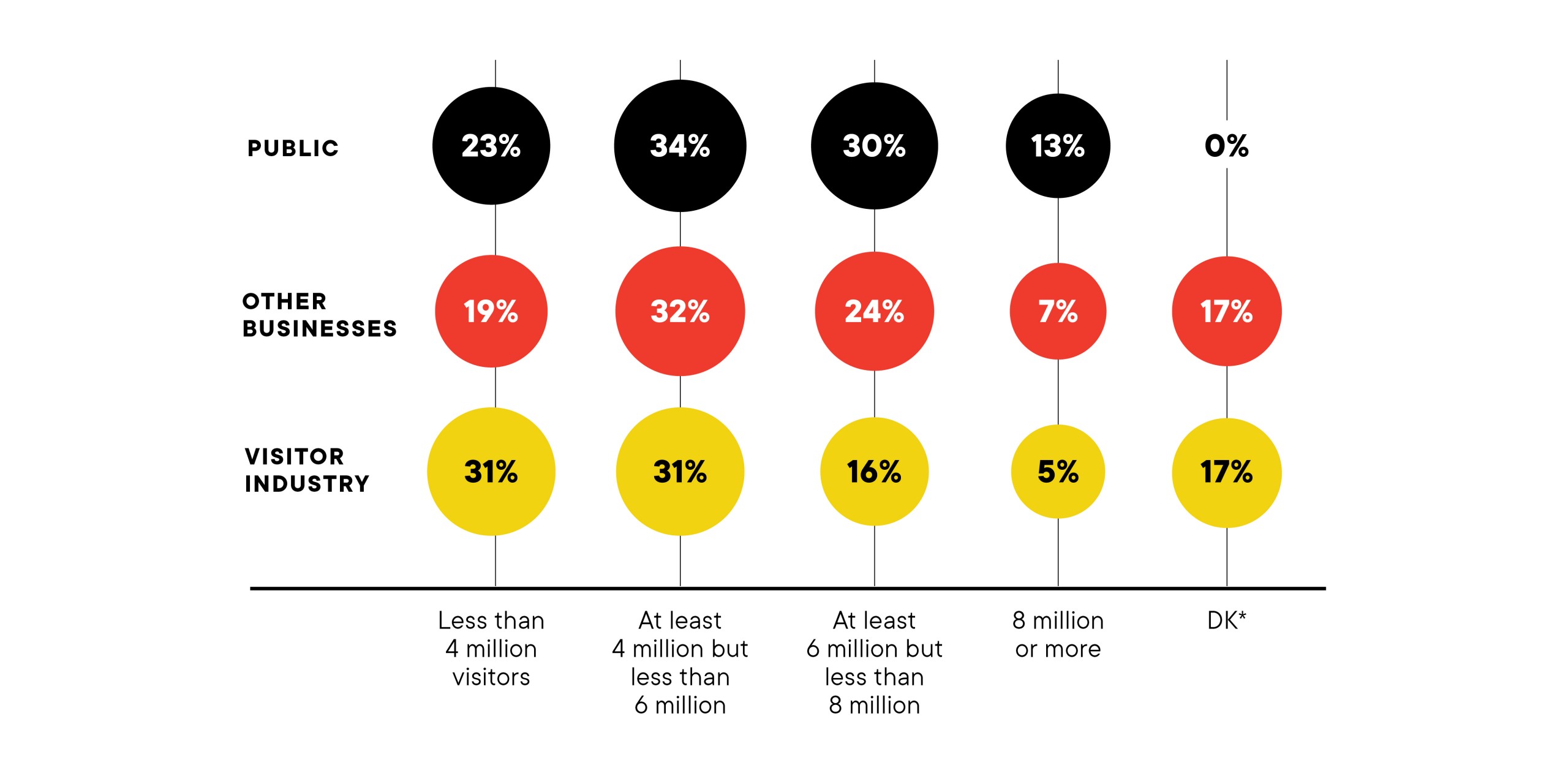 The tourism business leaders on average estimated a lower visitor count than the other two groups. Note: Percentages don’t always add to 100 due to rounding

Respondents were asked in what year Hawai‘i will again see about 10 million visitors.

*Dont know or refused to answer

Again, it was business leaders in the tourism industry who were less likely to foresee a fast rebound to 2019’s numbers – or more likely to predict they will never return. 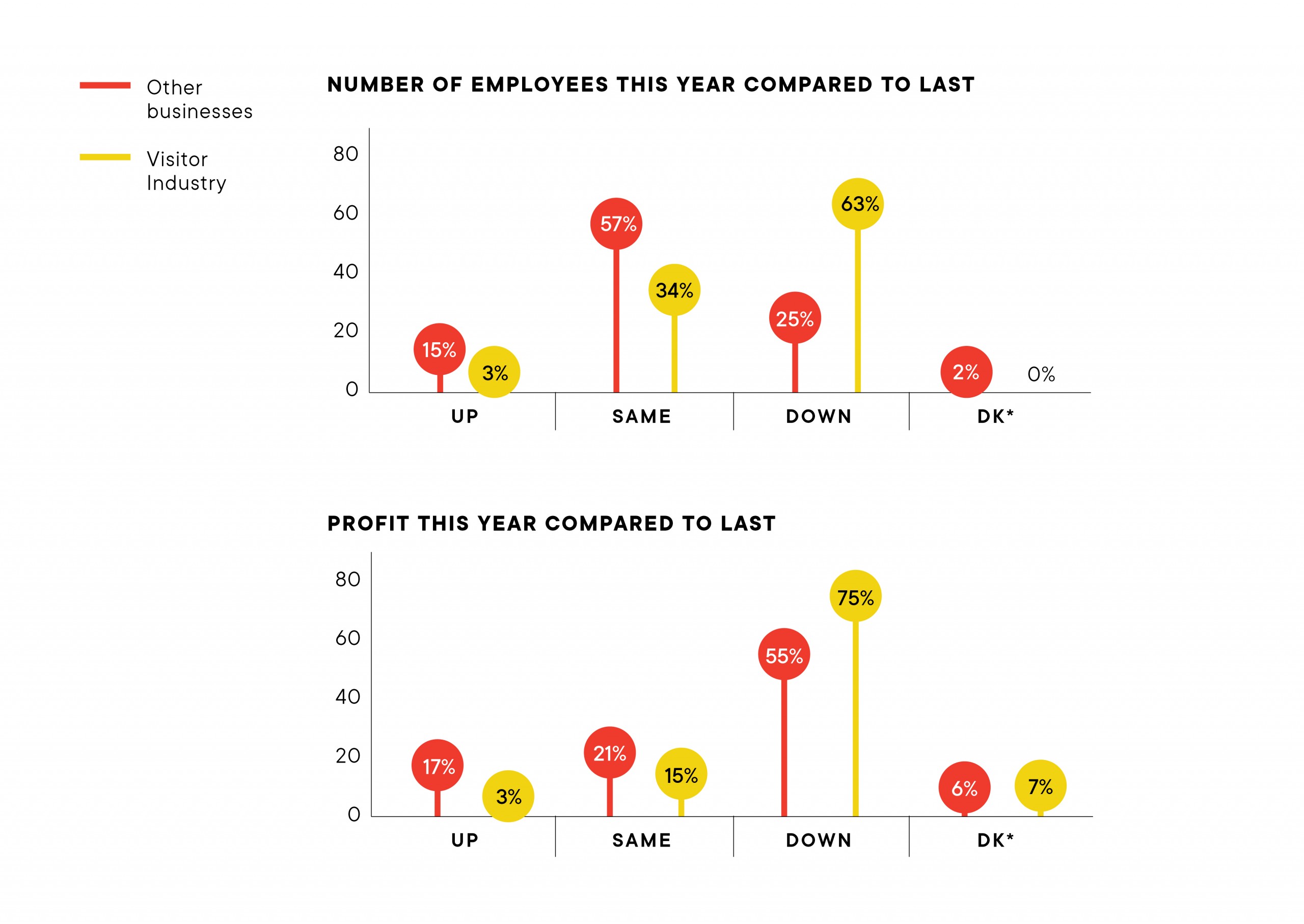 No surprises here, except maybe that 3% of the visitor industry companies said they enjoyed greater profit this year.

The answer may seem obvious, but what’s interesting is the percentage of companies that said no: Has your business been affected by COVID-19?

Respondents were asked if they were worried about themselves or someone in their household contracting the COVID-19 virus. For many of the following questions, the answers between visitor industry leaders and other business leaders did not vary much, so we combined their answers. 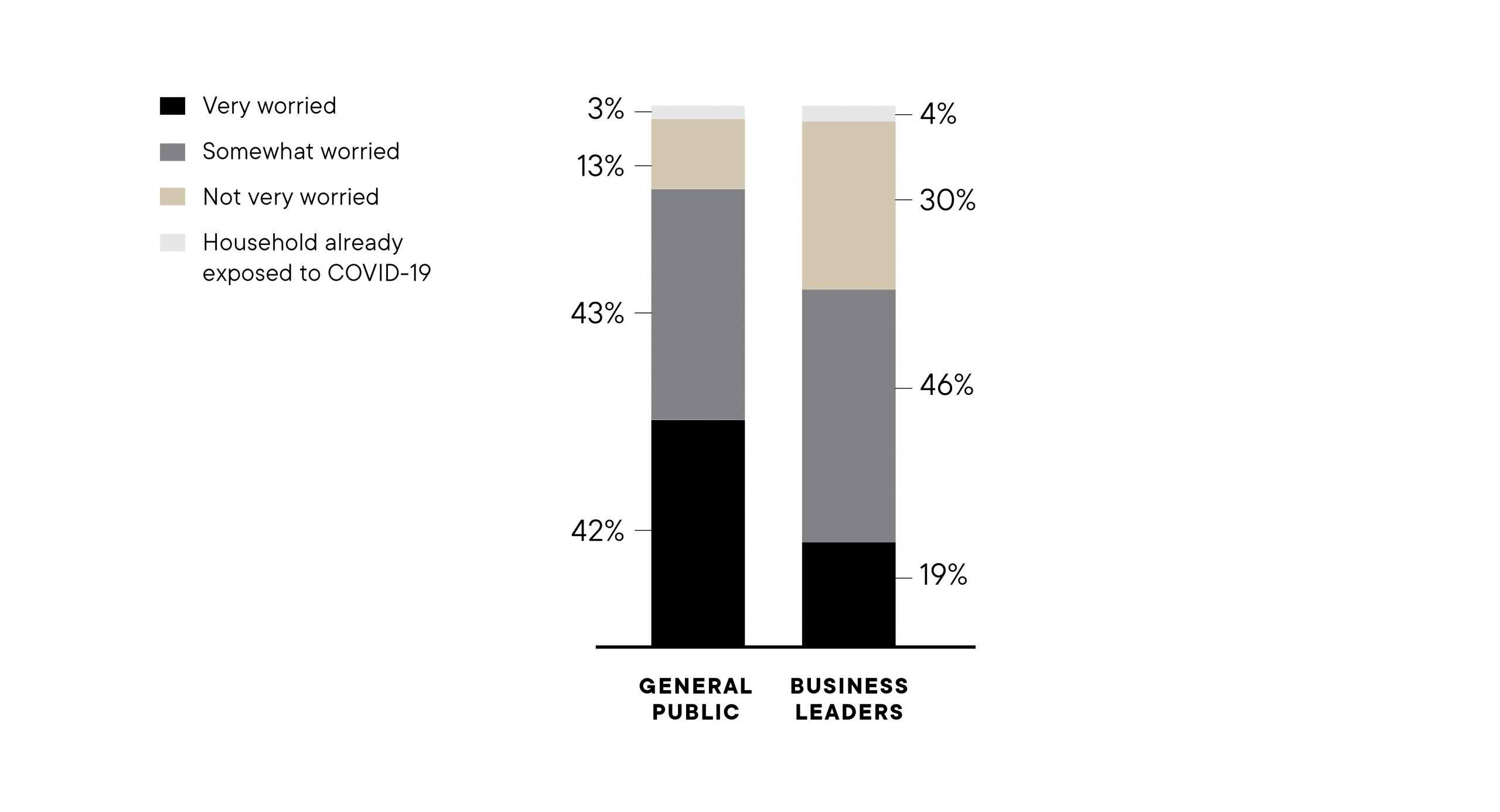 Note: 49% of public respondents who were born and raised in Hawai‘i were very worried; only 31%

of transplants to the state were very worried.

Those respondents with a child or children in their household were asked to select the response that best described their personal situation on childcare and schooling during the pandemic. 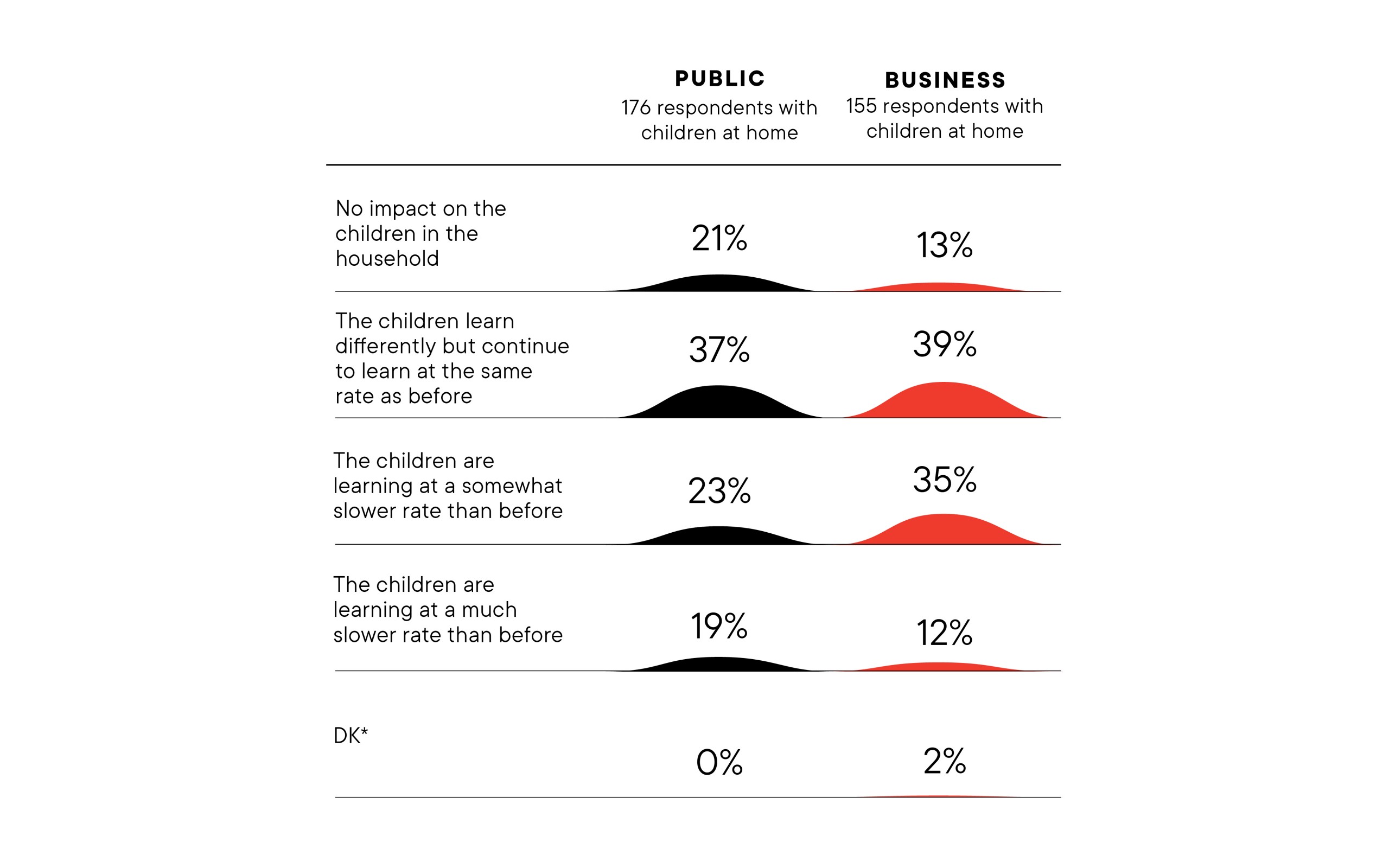 Those who are employed with a child in their homes were asked how their child’s schooling and/or childcare has impacted their work.

Next, those respondents were asked which of the following three statements best described their work routine as it relates specifically to work from home status.

Those who are working from home more during the pandemic than they did before were asked to rate their overall experience as it relates to efficiency and effectiveness. 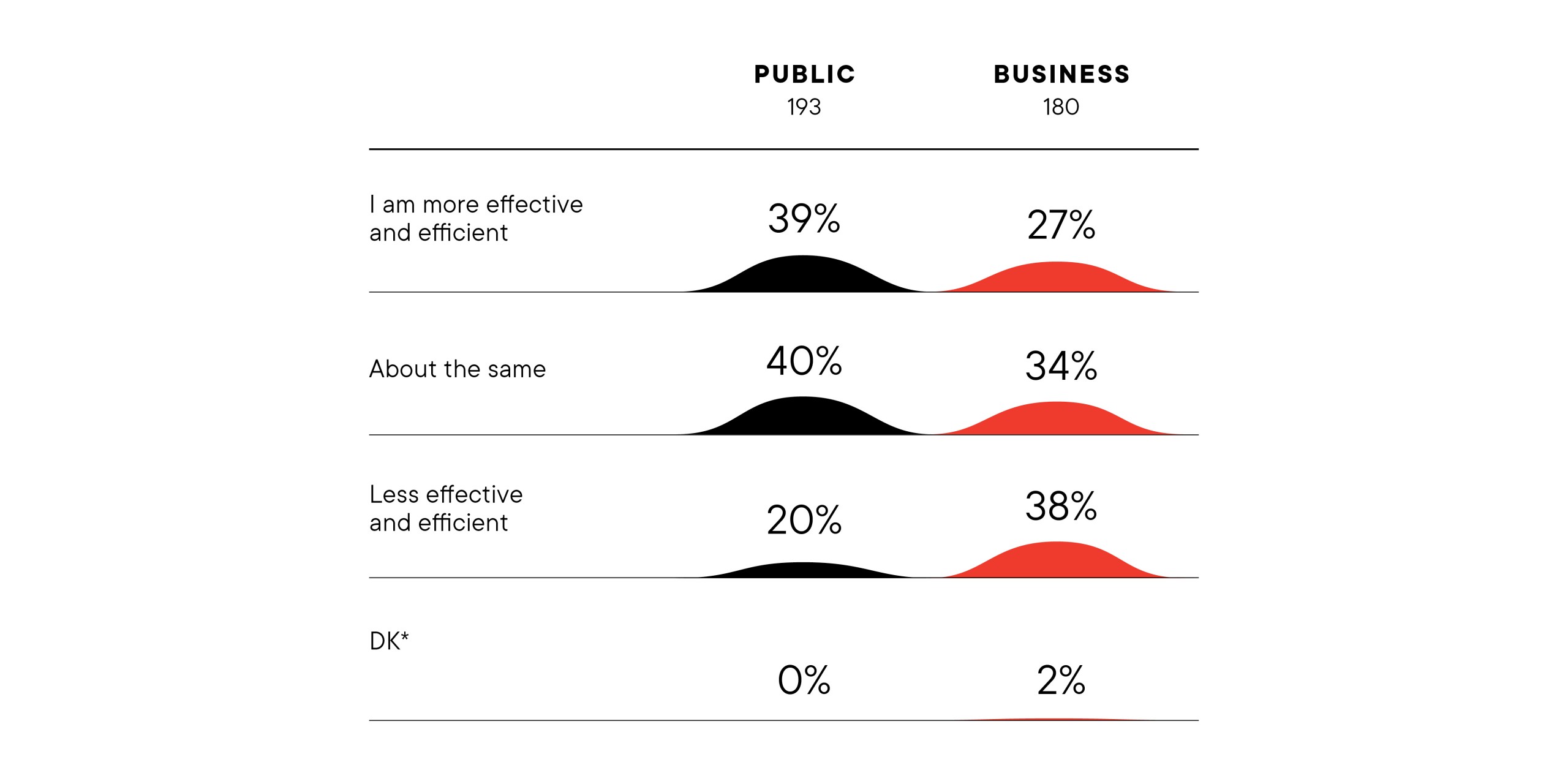 Methodology for the BOSS Survey

The sample of companies was stratified based on number of employees. Small businesses were divided into two subgroups. Businesses with two to nine employees were designated as “very small” and those with 10 to 49 employees were designated as “small.” Medium-size companies were those with 50 to 99 employees while companies with 100 or more employees were classified as “large.” The goal was to complete interviews with executives heading 50 businesses in each of the large and medium sectors, with 300 interviews falling into the two small business categories. The data was weighted to reflect the proper proportions of each company segment based on number of employees as reported by the Hawai‘i Department of Labor.

A total of 413 random interviews on all the major islands were conducted from Oct. 21 to Nov. 4, 2020. The data was weighted to reflect the proper proportions of each company segment based on number of employees as reported by the Hawai‘i Department of Labor. A sample of this size has a margin of error of plus or minus 5.0 percentage points with a 95% level of confidence.

A secondary goal was to complete interviews with people at 100 businesses who describe their companies as deriving a significant proportion of their revenues from tourism. A total of 119 tourism industry companies were surveyed.

Methodology of the 808 Poll

The research team at Anthology Marketing Group conducted an online survey of the general public in Hawai‘i based on a sample of email addresses purchased from a third-party supplier that specializes in such samples for online surveys. This sample was augmented by Anthology Research’s proprietary panel of respondents who have agreed to take part in surveys.

The survey was conducted Oct. 21 to Oct. 27, 2020. A total of 502 completed surveys were collected statewide. The resulting data was weighted to reflect population estimates of adults 18 and older on each Hawaiian island.