As we step up our efforts to reduce homelessness, we need to work harder to prevent it. One way is to increase the number of people who have enough savings to weather a short-term financial crisis – a lost job, a broken car or a big bill – so they can still pay their rent and don’t end up on the street.

Another measure is the asset poverty rate: the percentage of households with enough net worth to live at a poverty level for three months without income. By this measure, a family of four with liquid assets of less than $5,963 is liquid asset poor. Hawaii has the lowest rate in the nation: Only 16.5 percent of Hawaii households fall into that group, compared to the national average of 25.4 percent, according to U.S. Census data. 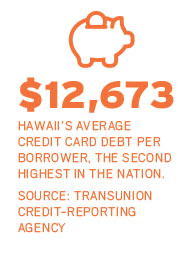 The problem is that $5,963 goes a lot further in Nevada, the state with the worst rate, than in Hawaii, so adjust your thinking accordingly.

A darker picture is shown by the extreme asset poverty rate, which measures households that have no net worth; in other words, their debts exceed their assets. This time Hawaii ranks 13th “best” in the nation, with 13.7 percent of local households falling into this category, according to Census statistics. These are the people most likely to end up homeless.

Increased savings by working class and poor people makes sense for all of us. After all, the price the community pays to get homeless people off the street and back into housing is many times what it would cost to keep them in their homes in the first place.

How to increase savings? We will explore some ideas in the next few months in a new column called “Worth Considering.” The overall theme of the column is innovative programs on the mainland and around the world that try to tackle problems also plaguing Hawaii. The first column, on page 22, examines a city of San Francisco program that jump-starts college savings accounts for public school students. Anything that gets more local children to graduate from college – with less debt – is definitely worth considering.

This article appears in the December 2015 issue of Hawaii Business Magazine.
Categories: Opinion

Our Publisher Says Aloha After 45 Years in Local Media