Factory-Built Housing Made in Hawai‘i

As the fifth-generation leader of a local company, Jason Fujimoto has seen the lack of affordable housing impact his own Hawai‘i Island community, including people he knows and works with.

“We’re now in the second year of population decline in our state because our locals just can’t afford to live here,” says the president and CEO of HPM Building Supply. “Among those that stay, there’s a lot of multigenerational living going on. And if they’re not doing that, then they’re living in illegal, unpermitted structures, which are just not safe. But what alternatives do they have?”

Fujimoto hopes HalePlus, HPM’s new line of factory-built homes, will create such an alternative. Available initially on Hawai‘i Island beginning the second half of 2020, these modular units will be made entirely at HPM’s facilities in Kea‘au. They will then be transported on trailers, fully built and inclusive of all turnkey ready fixtures and appliances, to their final destinations.

This process results in less environmental waste and less time, says Fujimoto. From the time construction starts to the time owners can move in will be under three months, he says, compared to the year or more it takes to build an on-site house. 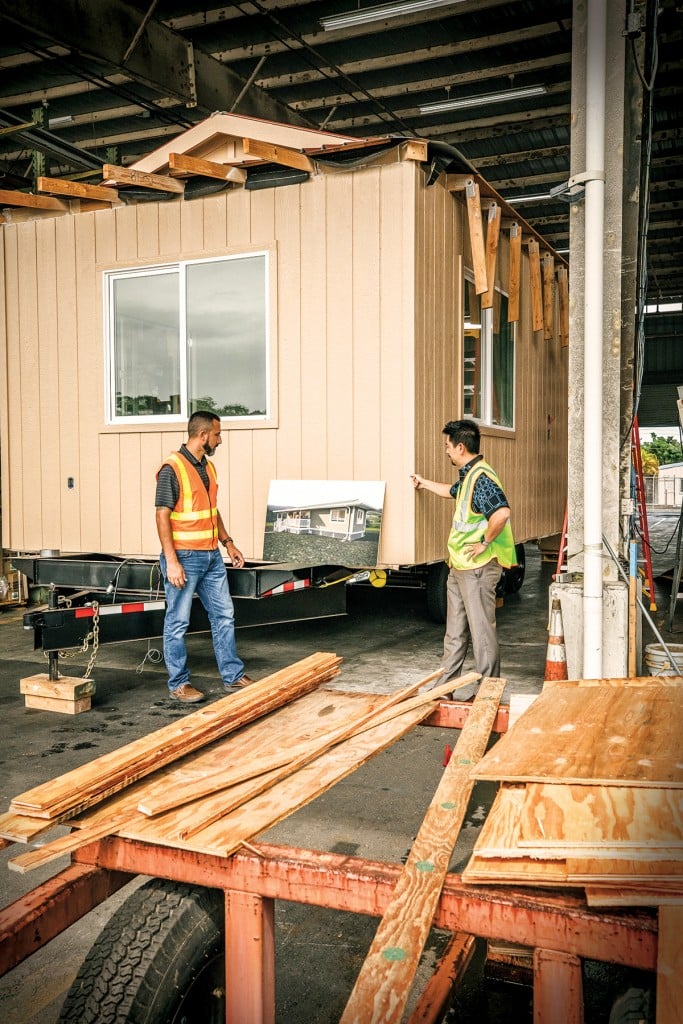 Most important, the homes will be more affordable than anything comparable on the market today, Fujimoto adds. At under $100,000 for the base model, you get a 636-square-foot home with one bedroom, one bathroom, an open living and dining area, a full kitchen and a covered patio. Add as little as $30,000 for a plot of land on some parts of Hawai‘i Island and homeownership will be achievable for just a fraction of the statewide median home price, which Zillow says is $616,600.

Once its new manufacturing facility is complete, HPM says, it could produce up to 500 HalePlus homes a year. Twelve have already been ordered at a discount for Hope Services Hawaii as low-income senior housing. There are also plans to provide units configured for workforce housing in Waikoloa and on Lāna‘i.

“We’re all saddled with the enormous cost of living in paradise. We’ve all talked about it, but no one has been able to produce truly affordable housing until now,” says HPM’s executive director of strategic business development, Lee Wilson.

“HalePlus is not just another product. It’s something we think will be a game changer.”

HPM risk management director Darryl Oliveira acknowledges the idea of manufactured homes can turn people off, conjuring up images of shoddily built prefab structures from who knows where. Once people see HalePlus and understand it’s 100% locally built, plus how it’s built and who it’s built for, those concerns will dissipate, Oliveira says.

“Our design team worked hard to create that feel and appearance of a traditional home in Hawai‘i,” he says. “The quality materials, the way it’s laid out, the paint colors and trim. It looks and feels like any other home in any other subdivision.

“In fact, I would challenge anyone to be able to tell the difference.”

For Fujimoto, HalePlus is more than just another factory-built structure. It is, as he calls it, a dynamic home system. Engineered to be modular, people will be able to choose different sizes and configurations, with the flexibility of adding more whenever they need to. For instance, during a tour, Fujimoto shows how a sunroom module as well as various bump-outs for nooks and crannies can transform the 636-square-foot base model into an 800-plus-square-foot home.

“One key tenet that guided us is the idea of expandability, to meet the needs of families at every stage of their lives and finances. They can start small and then grow their home over time,” he says.

Another facet of HalePlus’ dynamic nature is its transportability. Although it is not meant to be a mobile home, it can be moved if necessary, making it a practical solution for people who live in risk prone areas.

“This island is exposed to all sorts of hazards like lava, earthquakes, tsunamis and hurricanes,” says Roy Takemoto, executive assistant to the office of the mayor of Hawai‘i County. “What HPM has done is something very unique: creating an affordable way to relocate your whole home if you have enough warning time.”

ALICE households – those that are asset limited, income constrained and employed – make up 37% of the state’s population, says Janice Ikeda, citing a report from the Aloha United Way. Ikeda leads Vibrant Hawai‘i Island, a collective movement to help lift ALICE families there into a more stable life. She says those statewide numbers are even higher on Hawai‘i Island, where 44% of families with children younger than 18 and 45% of people older than 65 qualify as ALICE. While technically still above the federal poverty level, these households are often just a paycheck or two away from not being able to make ends meet.

“These are the people who can easily fall through the cracks. They make too much to qualify for anything (welfare benefits) but not enough to get by,” says Ikeda. 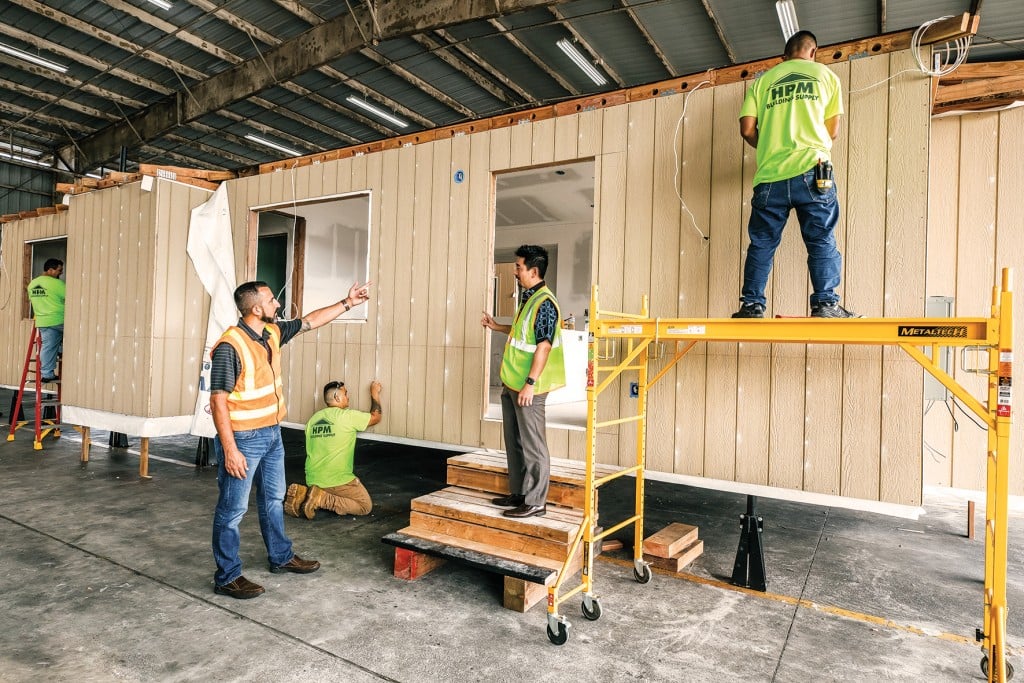 Hope Services Hawaii CEO Brandee Menino sees HalePlus filling a gap. “ALICE households need such affordable options for becoming homeowners. Instead of falling behind on rent they can start to build equity, breaking the cycle of poverty for future generations. And in turn, they free up space in the low-income rental market and homeless shelters for others who have no possibility of homeownership.”

HPM senior homes consultant Brigitte Spry envisions HalePlus appealing to a wide range of aspiring homeowners. “This could be for young families just starting out, who can get a one-bedroom and then expand as their families grow. This could be for seniors who want to downsize to a smaller home. This could be for someone from the Mainland who comes with their life savings of $200K and wants to buy something and not have a mortgage. There is such a need for this. I don’t think we even know yet what all the uses will be.”

Giving Back to the Community

HPM isn’t the first company to offer factory-built housing in the state. But it is the first to be deeply rooted in the community as a 99-year-old company that is now 100% employee owned, says Fujimoto. It brings its manufacturing and supply chain expertise, trusted vendor relationships, and deep understanding of the intricate and varied building codes that typically delay other construction efforts, he says.

“Factory-built housing has been in the continental U.S. for over 50 years. We’re not pioneering this, but in a sense we’re pioneering the success of this in Hawai‘i,” he says.

For Menino, HalePlus represents not just a singular solution, but a model for the role businesses can play in solving the housing crisis. “We can’t just rely on the government to address this issue. It’s important to have partners who are willing to think outside of the box and to harness our collective sense of urgency.”

“We’re not pioneering this, but in a sense we’re pioneering the success of this in Hawai‘i,”
-Jason Fujimoto, President and CEO, HPM Building Supply

Likewise, Takemoto of the Hawai‘i County mayor’s office hopes other businesses will follow suit. “We encourage any other ideas that the private sector may want to explore, ideas that are new to Hawai‘i but are being done around the world,” he says. As an example, he cites pocket neighborhoods – clusters of smaller, affordable homes facing a shared, common space. “Together we can figure out how those ideas apply to us, our local conditions and our culture.”

Given all of the upfront investment and the commitment to selling HalePlus at an affordable price, Fujimoto acknowledges that actually making a profit will take time. Nonetheless, he says his team is strongly committed to giving back to the community. In 2018, HPM partnered with other local leaders to convert 20 of its outdoor sheds into temporary microshelters for those who had lost homes to the Kīlauea lava flow.

“All of us saw firsthand back then how we could make a difference, and how that aligned with our vision to enhance homes and transform communities. We all agree that everything we do should help our community build better and live better,” says Fujimoto.

“All of our team members embody this mission. And now, HalePlus embodies this too.”

This article appears in the February 2020 issue of Hawaii Business Magazine.
Categories: Construction