Hawaii is the World’s Shrimp-Breeding Capital

Shrimp is the most popular seafood in the U.S. – the average American eats more than four pounds a year. But nearly all of it is imported and most of that farm-raised in Asia and South America. Those are well-known facts. What’s less well-known is that most of the world’s farmed shrimp can trace their genes back to Hawaii. Here’s the story about how that came about.

“Hawaii has a long history in shrimp farming. Precontact, Hawaiians harvested local shrimp from coastal fishponds for hundreds of years,” says Carol Wyban in her book “Tide and Current: Fishponds of Hawaii” (yes, that’s my wife). Shrimp farmers had also operated in Asia for centuries, but everywhere the farmers were always limited by the supply of ocean-caught baby shrimp, called post larvae, or PL, in the industry. No one was able to breed shrimp, so farmers had to use young shrimp caught in the ocean and then stocked in large ponds, where they matured and were harvested.

A breakthrough began in 1934, when a Japanese scientist named Motosaku Fujinaga closed the life cycle of penaeid shrimp. It took further decades of work by Fujinaga and his colleagues – interrupted by World War II – before they were able to fully refine their techniques. 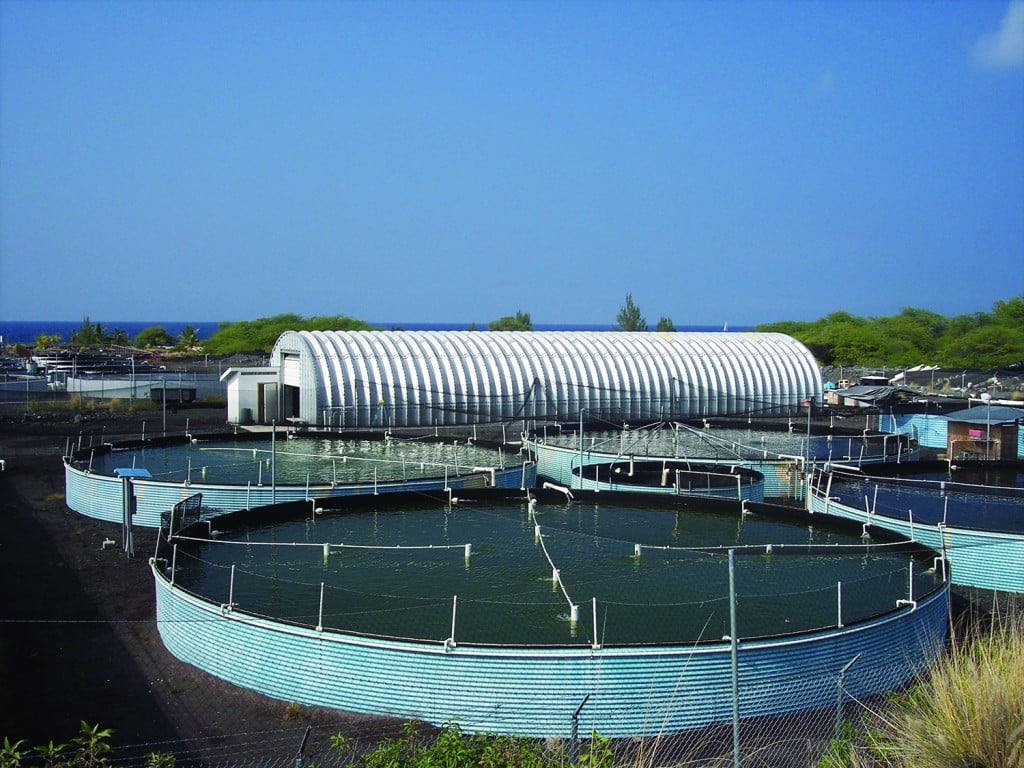 Wild-caught parent shrimp were placed under ideal conditions of diet, temperature and recurring light-and-dark cycles, and they spawned fertilized eggs. After hatching, the larval shrimp could be reared in large tanks where they were fed cultured marine microalgae and live artemia (also called brine shrimp). After three weeks of physical transformations, PL were harvested and could be stocked into ponds. Removing the PL-supply bottleneck created the conditions for a worldwide expansion of shrimp farming.

In the early 1980s, I was hired by Oceanic Institute to manage a large research project to help develop shrimp farming in the U.S. Even then, shrimp was America’s No. 1 seafood, but shrimp imports cost more than $2 billion a year. It was reasoned that an American shrimp-farming industry could replace those imports, create rural jobs and keep a lot of dollars from going overseas.

At OI, my colleagues and I were tasked with identifying obstacles to a U.S. shrimp-farming industry. When we met with shrimp farmers in Hawaii, Texas and South Carolina, consistent problems emerged. Serious disease problems prevented reliable production – problems that usually started at the hatchery stage, because wild broodstock often carried disease. Similar problems had been solved in other animal production systems, with pigs, chickens and cattle, so we set out to develop disease-free shrimp. In collaboration with the Hawaii Department of Agriculture and the University of Arizona, we developed a shrimp that we called SPF (specific pathogen free) to reflect the quarantine and certification process through which they passed. Our first SPF shrimp were born in Kona in 1990. 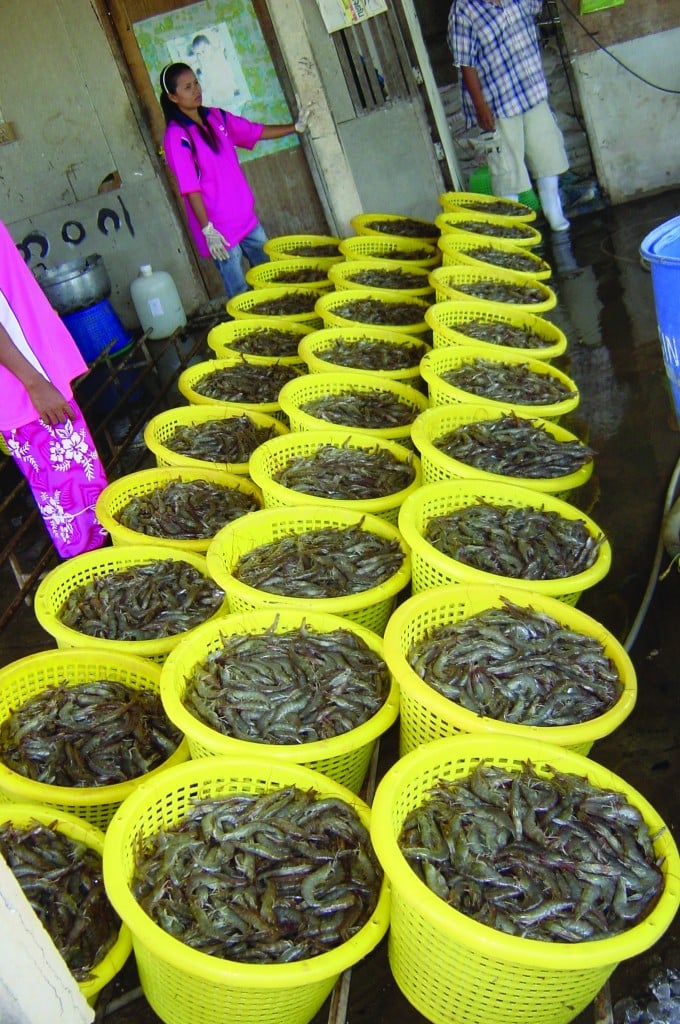 Shrimp harvested in Thailand from broodstock raised in Hawaii

To test if these SPF shrimp could help solve the disease problems, we supplied commercial farms in Hawaii, Texas and South Carolina with a large batch of SPF broodstock in time for the 1991 growing season. The PL were produced from broodstock under biosecure conditions so they were disease free. The SPF PL were grown side by side with standard PL, yet, in all cases, the SPF PL far outperformed the standard PL – faster growth, more uniform sizes and higher survival rates in all cases. Because of these encouraging results, we produced more SPF broodstock in Kona and, in 1992, stocked all shrimp ponds in the U.S. The 1992 shrimp crop exceeded all expectations. Production increased at every farm and the overall U.S. harvest doubled over previous years.

I went to my boss at the Oceanic Institute and told him there was a huge opportunity in this technology and that we should commercialize it. He told me that OI was a research institute and not interested in commercial activities. So I quit my job and, with my wife, Carol, we started our own company, High Health Aquaculture, the world’s first SPF shrimp-breeding company. We moved our family to Kona, where we secured a lease at the Natural Energy Laboratory of Hawaii and began supplying SPF broodstock in 1993.

Our first commercial effort was a massive failure. A major shrimp-farming company from Ecuador, El Rosario, wanted to introduce SPF technology to its farms. It invested in our company and we worked closely with its staff to do a major production trial in El Rosario farms. We shipped SPF broodstock from Kona to Ecuador. More than 500 million SPF PL were produced in Ecuador and stocked into five separate El Rosario farms. During the hatchery phase and the first few weeks after stocking, everything went smoothly.

I was attending a conference in Europe when I got a late-night call from Ecuador. I was told I should fly there immediately because many shrimp were dying. By the time I arrived, massive die-offs were happening in all of the SPF ponds. This killed our partner’s interest in SPF technology and deflated our enthusiasm. We eventually learned that our SPF shrimp had been killed by a new virus called Taura Syndrome Virus. Despite the problems in Ecuador, we continued to supply the U.S. industry, where results remained great.

In 1997, a group from Taiwan imported the first batch of SPF broodstock to Asia. Based on excellent early results, the Taiwan industry rapidly adopted SPF PL and the demand for Hawaii SPF broodstock boomed. Our fax machine was inundated with requests to buy broodstock and groups of Taiwanese entrepreneurs came to Hawaii to secure their supplies. By 1999, the success story of using Hawaii’s SPF broodstock reached the front page of Taiwan’s national newspaper. Soon, the use of SPF broodstock spread to China, and then to Thailand and Indonesia.

Our SPF shrimp were Pacific white shrimp, a species native to the Americas. In just a few years, these shrimp had displaced the black tiger shrimp, a species native to Asia, as the mainstay of Asia’s shrimp farms. The economic impact of this change in broodstock was huge. In 1998, when Hawaii SPF began shipping to Asia, annual farmed-shrimp production worldwide was 700,000 metric tons. By 2010, after most of Asia had switched to farming SPF shrimp, worldwide production had grown to 3.5 million metric tons – a five-fold increase in 12 years.

In Hawaii, several companies were formed to supply broodstock to meet Asia’s growing demand. Several groups worked on breeding their shrimp for improved performance, but, at High Health Aquaculture, we focused on breeding shrimp for resistance to Taura virus – though many experts told us it was an impossible goal. Several years after Taura had devastated our commercial trial in Ecuador, it reached the U.S. and devastated domestic shrimp farms.

We worked hard at our Kona farm to find a solution. Our method was to create a batch of different families, all of the same age. The families were grown in separate tanks until they grew to one gram in weight. Samples of each family were then given a distinct color or combination of colors with injections of a liquid plastic material. The tagged families were shipped to professor Don Lightner’s pathology laboratory at the University of Arizona’s Department of Veterinary Science and Microbiology.

Over about eight generations, the average survival rate of our shrimp increased like stair steps – from about 20 percent to over 95 percent. We had defied the genetics and disease experts who said it couldn’t be done.

During that process, we had to develop biosecurity measures to prevent the introduction of shrimp diseases to our facility. One important rule was no outside visitors. I remember one day when Sen. Daniel Akaka visited the Natural Energy Lab and was brought to my facility. I met him outside our gate but didn’t let him inside; after I explained our facility’s strict quarantine, he was very gracious and understanding.

In addition to breeding for virus resistance, we also selected our shrimp for fast growth. Within the select families that passed our virus challenge, we selected the fastest growing individuals to parent the next generation. This combined selection program was very effective. We started supplying our Taura-resistant broodstock to the U.S. industry in 1997 and, over the next four years, shrimp production tripled from 2,000 metric tons to 6,000 metric tons using our broodstock.

Hawaii’s SPF shrimp broodstock are analogous to the prize bulls used in cattle breeding – they are the gold standard. None of the breeding activities in Hawaii’s shrimp-broodstock industry use any genetic modification. Breeding techniques are all traditional selective breeding and there are no Hawaii GMO shrimp.

In 2012, we sold our company, HHA, to an Asian multinational, Shrimp Improvement Systems (SIS). That company now makes Kona its world production headquarters and hugely expanded on our business with a $10 million investment. 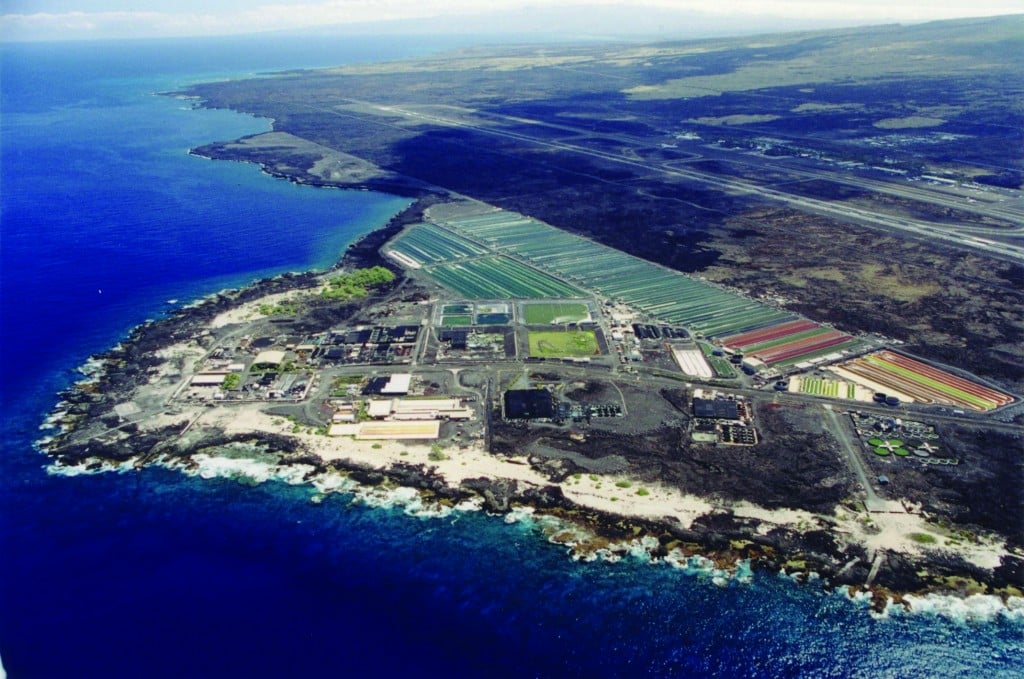 Shrimp Improvement Systems Group, the world’s largest supplier of SPF shrimp broodstock, says it plans to consolidate all of its breeding activity at the Natural Energy Lab of Hawaii in Kona, pictured here.

SPF shrimp are the foundation of the global shrimp industry and Hawaii is both the home of SPF breeding technology and its world supply leader. The many benefits to the industry of using SPF shrimp include greatly reduced disease, less use of antibiotics and ending the practice of capturing wild animals for seedstock.