Hawaiʻi's Most Charitable Companies is the most comprehensive listing of corporate philanthropy in the Islands. Since its debut in 2012, the list has grown from 53 organizations to 113 this year.

Total donations on the current list: about $91.4 million of cash and in-kind gifts made during 2013.

Lori Suan, executive director at the American Heart Association, Hawaii, says fundraising has made significant advances since hitting a low point in 2008, when donations dried up quickly in the recession. While donations are back up, challenges remain. “Yes, there is more money out there today, but donors have become more savvy and discerning in how they want to spend their dollars,” Suan says.

The vast majority of donations listed on the Most Charitable Companies list were in cash: $81.6 million, compared to $9.8 million of in-kind gifts. Cory Kubot, principal at the accounting firm Accuity, which advises Hawaii Business on the Most Charitable Companies and the Top 250, says he’s not surprised by the ratio of cash to in-kind donations. “In-kind donations are great, but they won’t pay the electricity bills,” he says.

During rough economic patches, companies steer toward in-kind gifts, like goods or volunteer hours, because cash is scarce. The pendulum swings back during times of prosperity. “The economy is going strong right now,” Kubot says. “Time is money, so cash is easier to give.”

The uptick in cash donations is palpable. This year, nine organizations reported donating at least $1 million in cash, a jump from six on last year’s list. The volume of organizations that donate $100,000 or more in cash is also up, to 35 from 29.
Enterprise Holdings increased its donations by $110,000, to $255,000.

“As we have expanded our footprint in the state, we have also increased our commitment in the new areas that we are establishing a presence in,” says Chris Sbarbaro, VP for Hawaii, sales and marketing, at Enterprise Holdings, which owns Enterprise Rent-A-Car, Alamo Rent A Car and National Car Rental Hawaii. The company now has 60 locations in Hawaii, an increase of about 20 in the last four years. Enterprise’s parent company encourages employee community participation by matching 50 cents on each dollar that employees raise.

We considered creating two lists: one ranking for-profit companies and one list ranking charities and nonprofits. Accuity advised us against that, saying that such distinctions are not always black and white. Several of the big companies on the list make most of their donations through their own nonprofit foundations. One reason they do this is to keep donations stable from year to year, and not subject to the ups and downs of business-cycle profits. If we had separate lists for nonprofit and for-profit companies, it is not clear in which list we should place the companies’ foundations. Instead, we chose to run a single list, while acknowledging that some charities have an unfair advantage on it.

One of the most important metrics on the list of Hawaii’s Most Charitable Companies is the ratio of how much organizations donate relative to their revenues. On average this year, the cash and in-kind donations that were reported represent 0.56 percent of a company’s revenue. To calculate that average, we excluded the three nonprofits that were among the biggest outliers from that calculation:

• Hawaii Community Foundation, a charity that gave $43 million in cash last year – 120 percent of its income – to diverse causes such as education and housing for homeless families.

• Parker Ranch, a nonprofit that runs like a business, donated $20 million, or 13 percent, of its earnings to its beneficiaries: North Hawaii Community Hospital, Parker School, Hawaii Preparatory Academy and Hawaii Community Foundation.

• Kamehameha Schools donated $20.6 million – 6.1 percent of its earnings – to charities outside its primary mission to educate Hawaiian children.

For the local companies that operate their own foundations, the donations made by the foundations were divided by the companies’ revenues to calculate the giving percentage of giving.

Among for-profit companies, two caught our eye. Stars Above Hawaii, which does star shows at Ko Olina resort, donated an astounding 16.69 percent of revenue to charity last year. In 2012, its giving ratio was 6.3 percent.

The other company is CDF Engineering, a consultancy based on Maui. The 11-employee company donated 7.41 percent of its income, primarily to The Nature Conservancy’s Palmyra Atoll research project. In all, the firm gave $5,956 in cash and $169,239 worth of in-kind donations.

Prior to CDF’s volunteer work, modern jets could not land on Palmyra Atoll, which meant many scientists and researchers had to take a five-day boat trip from Honolulu before reaching their destination. For more than a year, CDF says, it donated engineering services to redesign and rehabilitate Palmyra’s runway, which dated back to World War II and had been badly battered by time and weather. Nearly everyone in the company, including founder Jacob Freeman, participated in the project, including providing on-site labor.

“I have a passion for the environment,” Freeman says. “Helping The Nature Conservancy has been a tremendous opportunity for me professionally and personally.”

Not all organizations can donate cash, yet still have a big impact. The Most Charitable Companies ranking includes categories for volunteer hours by companies’ employees, both on the job and off the job, though few companies track that data. One organization that does is Hawaii Families as Allies. The nonprofit, which supports children’s mental health, allows staff to volunteer during business hours. Its 15 employees donated an average of 90 hours of work time last year, for a combined total of 1,348 hours.

“Having our workers ingrained in the community allows us to make connections that will eventually help us serve our members better,” says Shanelle Lum, public-policy specialist at Hawaii Families as Allies. “The good we give eventually comes back to us.”

Other small companies that enthusiastically encouraged employees to volunteer during business hours include Ashford and Wriston LLP, whose 58 employees collectively gave 1,500 hours, and Kalaeloa Partners, whose 32 workers volunteered 1,000 hours combined.

The list is not perfect. We rely on self-reported data, which means a lack of uniformity in calculation methodologies from one company to the next. Also, there are hundreds of companies in Hawaii that do not submit their information to us for the list, so the picture is incomplete. Even with those limitations, there is no better guide to corporate giving than our list of Hawaii’s Most Charitable Companies. 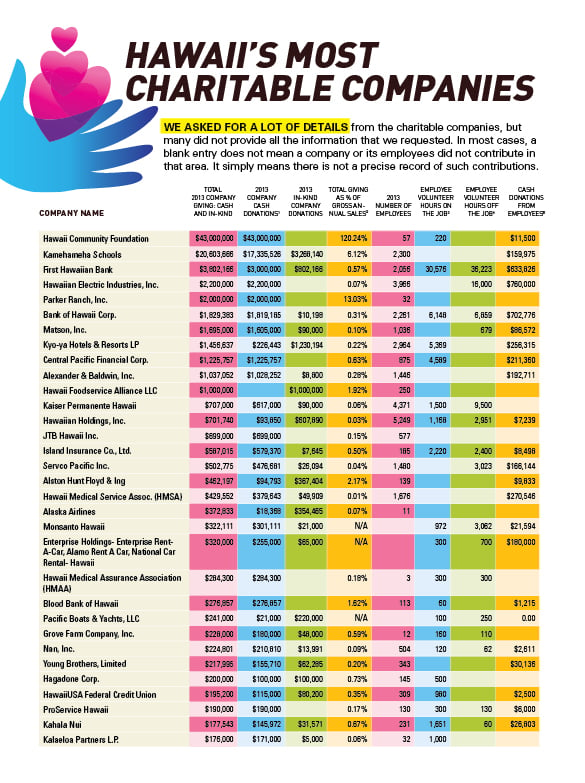