The technical term is “vertical integration,” and what it simply means is that you create your own raw materials, process them in-house and sell the finished products directly to the public. It’s a huge challenge to do it all yourself, but here are three local small businesses that make it work.

There are many things to appreciate about wine. The taste, of course, plus the color and bouquet, but it is also rewarding to appreciate the process, patience and hard work that goes into each bottle.

Although it has been in business 37 years, Tedeschi Vineyards is still young and innovating, says president Paula Hegele. “We are constantly experimenting and trying new things,” she says.

The company has 18 acres in production at Ulupalakua Ranch on the leeward slope of Haleakala, but intends to plant more vines in 2012. From the lowest section, the farm climbs 1,800 feet, creating varied conditions for its different grapes: Syrah, the company’s main variety, along with Chenin Blanc, Viognier and Malbec.

“The crops take in the soil, they take in the conditions and become unique to your area,” she says.

The main thing that contributes to that uniqueness is Hawaii’s mild climate; in most winemaking areas, the vines go dormant naturally in winter, but in Hawaii, the vines have to be forced into dormancy.

“Although we harvest once a year, it takes year-round commitment to grow good grapes in Maui,” says Tedeschi’s winemaker, Mauricio Soler-Cruz. “There are multiple challenges, but I would say that forcing dormancy and keeping off molds and bugs are the most difficult in the vineyard. Dormancy is particularly difficult because the climate and humidity make the vines grow excess vegetation that can lead to pushing fruit more than once per year. We want to concentrate on having just one good harvest rather than two that are not of high quality.” All that work keeps the Tedeschi crew busy during those four winter months and throughout the year.

Harvest time in late August can never be precisely scheduled, so the crew might have only two days’ warning before they must begin handpicking the grapes.

“It’s really being patient at the end,” Hegele says. “Farming, birds, humidity … things like that all take away from the fruit. We’re really trying to make them taste like Hawaii.”

The harvest is only a start. Next come the other stages in winemaking: crushing, de-stemming, cold soaking, malolactic fermentation and aging.

“It is interesting to note that we ferment our wine in small batches according to the location they came in from the vineyard,” Soler-Cruz says. “During the process of fermentation we get to know the personality of each individually fermented block before we decide what part it will play in the final product.”

Patience is required throughout the process. Tedeschi’s 2010 Plantation Red wine, which is 100 percent Maui-grown Syrah, was harvested in August 2010, bottled in August 2011, and won’t be sold until early 2012.

Being involved in all parts of the winemaking process has paid off for Tedeschi. It gets about 180,000 visitors a year to its Maui winery and regularly wholesales to more than 12 other states and four countries.

“I believe that to make good wine you have to listen to what little nuances the vineyard and wines are telling you, since every wine is different, rather than forcing a process. You have to integrate different tools to the necessities of each individual lot,” Soler-Cruz says.

“I consider myself a very lucky guy. I get to do what I love in the most beautiful land, and while there are many challenges, I see them as opportunities to learn and get better.” 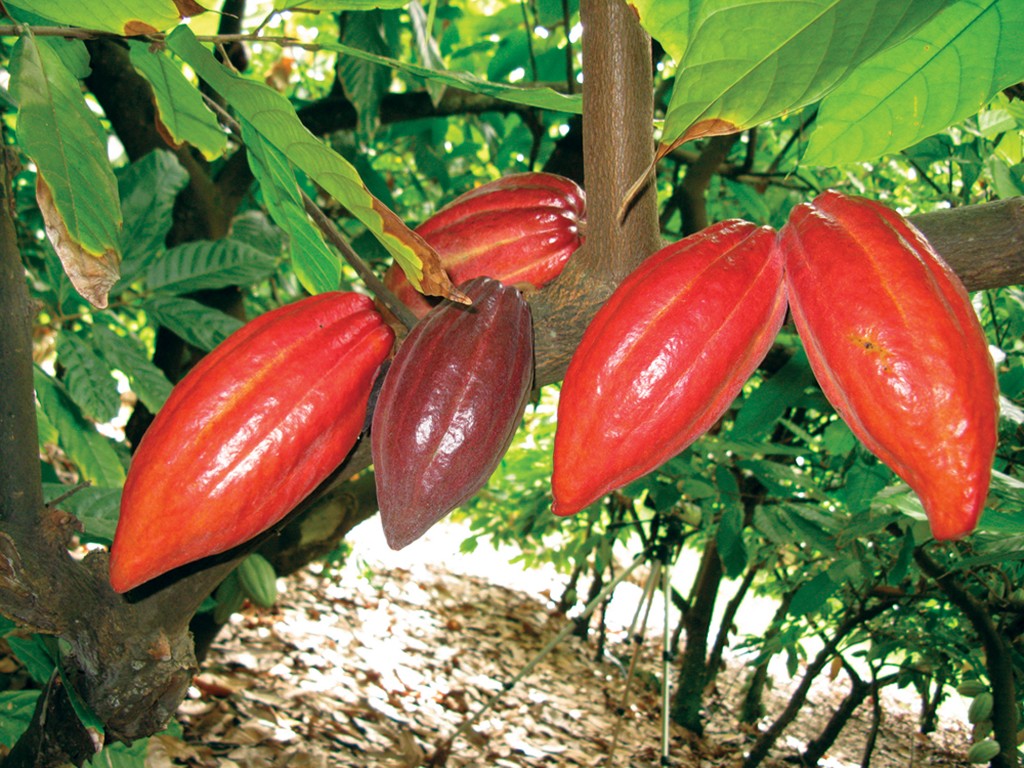 “Passion for what we do”

Bob and Pam Cooper, owners of Original Hawaiian Chocolate, grow their own cacao trees in Kona on the slope of Hualalai. They add in cacao beans from other local farmers, then process it to make truly local chocolate.

They bought the land in 1997 and made their first chocolate bar in 2000. Since then, they have been gradually increasing production and sales.

“There were cacao trees everywhere in Kona in the early 1900s, but no one before us ever decided to take the bean to the finished product,” says Bob Cooper.

Cacao pods grow on the branches and trunks of the trees and ripen after five months. The pods turn from green to yellow to maroon and red, signifying that they are ready to be cut.

The Coopers say they grow only forastero trees, which produce 80 to 85 percent of the world’s chocolate. Less hardy and therefore more rare are criollo trees, and the Coopers buy raw criollo beans from other local farmers. They are also collecting beans from the third tree in the cacao family, trinitario, a cross-pollination of forastero and criollo trees, but they don’t yet have enough of those beans for production.

Every two weeks, Cooper and an employee cut pods from the trees and pull out by hand the 30 to 40 cocoa beans in each pod. At this stage, the beans are still covered in white mucilage, so that is sweated off the beans, which takes six to eight days for forastero beans, and four days for criollo.

The beans are then placed in slatted boxes of untreated wood to ferment and dry in the Hawaiian sun for 22 to 28 days. Using a moisture analyzer, they ensure they get the beans’ 50-percent moisture down to 7 percent. Once dried, the beans can be stored for years, but most are immediately cleaned, roasted, winnowed, conched and transformed into chocolate.

For roasting, some big operations use a $3 million roaster, but the humble Coopers use a coffee roaster that they say works just as well. To turn the cleaned and roasted beans into smooth chocolate, the Coopers use a conching and refining machine equipped with 36 carbon steel blades. That process takes 18 hours to turn the chocolate into a liquid, and another 16 hours to mix in other ingredients. Then the bars are cooled and hardened for two-and-a-half hours. All in all, from the ground to the bar, it takes six months to make chocolate.

Pam Cooper does the bookkeeping and a couple of employees help package and sell the chocolate in their store and on the web. “We multitask here all the time,” Bob Cooper says. “It’s kind of a hectic thing to have to do, but that’s what makes us very different. We have a passion for what we do and we believe in what we do.”

The Coopers have been patient farmers and entrepreneurs. They made their first chocolate bar in 2000, but didn’t turn a dime in profit until seven years later. Last year, they made 10,000 pounds of chocolate and $250,000 in profit.

Eventually, as the company continues to grow, the Coopers plan to give 10 percent of their net income to Hawaii cacao farmers. “We haven’t reached that point yet but we hope sometime in the future to do that,” Bob Cooper says.

The Coopers are committed to their philosophy of buying beans only grown in Hawaiian soil. “If there are no Hawaiian beans to make chocolate, we don’t make chocolate. And it may be self-restraining, but it’s our choice to do that,” Cooper says.

“Our mission in life is to keep it Hawaiian.” 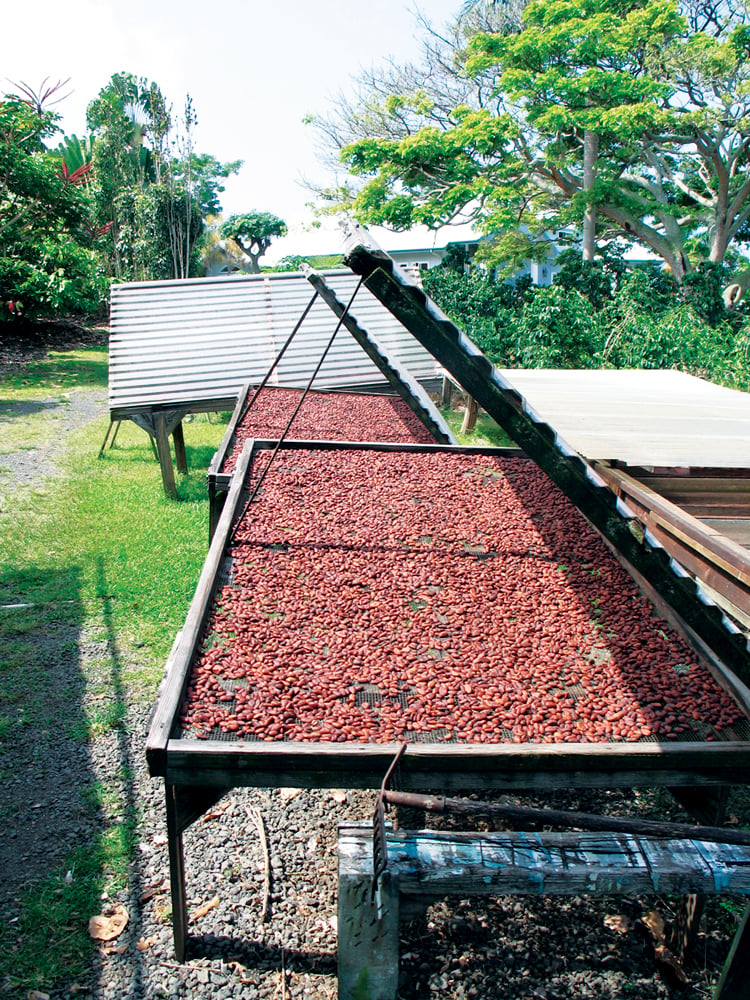 “Fish you can’t get anywhere else”

The fish at Hilo’s Seaside Restaurant travel only a few feet from the main fishpond to the kitchen to the patrons’ tables. Controlling all steps in the process to guarantee fresh taste has been the family business’s signature since Seiichi and Matsuno Nakagawa opened the Seaside Club in 1921.

Colin Nakagawa, grandson of the founders, is currently the chief chef and fish gatherer, working alongside his parents, Susumu and Ellen Nakagawa. Colin feeds the fish in the family’s fishpond two or three times a day, catches them for dinner and cleans them.

“You don’t need to do too much” to raise the fish, he says. “The fish practically take care of themselves.”

Colin gets the fingerlings, the baby fish, from his 30 acres of natural fishponds, where the fish feed off the ponds’ natural elements. Using a net, Colin guides more mature fish through gates into separate holding pens.

The different species of fish can take anywhere from four to six years to grow into market size and the restaurant goes through about 200 fish a week. Colin says it’s difficult to meet customer preferences, especially the high demand for mullet, also known locally as ama ama.

“The pond has a lot of predators for the fingerlings,” he says. “Ulua eat fingerlings and they can do a lot of damage to the pond. The heron likes to eat fish and it can eat a lot of small baby fish.”

At dinnertime, Colin catches the fish and puts them on ice with water and rock salt to kill them. Then, he takes them to the fryer and grill for a tasty finish. Ninety years ago, Colin’s grandparents only had mullet and chicken on the menu of the original Seaside Club, but the menu has grown over the years and today it includes aholehole, golden tilapia, rainbow trout and more.

“We have a strong local following,” Colin said. “We have fish you can’t get anywhere else and even if you did, it wouldn’t taste the same because of our water, which is always changing and never stagnant.” 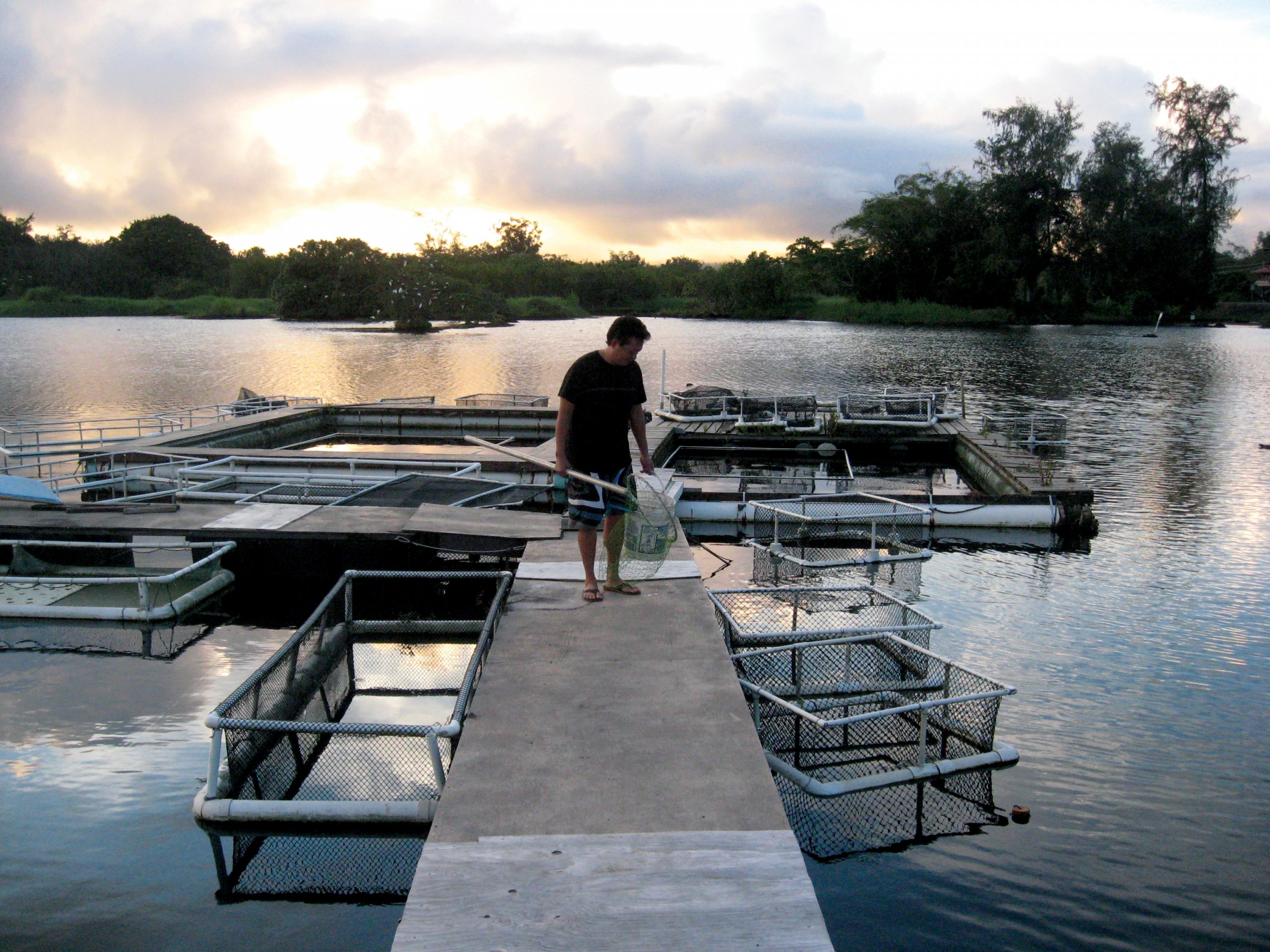 Pros and Cons of Vertical Integration

In agriculture, to be vertically integrated means to grow, harvest, process and sell your product to the public all within the same company. If done well, it can be a successful business model.

“The logic is that if you can vertically integrate positively, you’ll get the profit from each step of the way,” says John Butler, associate dean at Shidler College of Business at the University of Hawaii at Manoa.

But, Butler says, there are sometimes disadvantages to being vertically integrated. “People bite off more than they can chew,” he says. “Quite often, when people think they can make the profit, they underestimate the skill to make it successfully. Most companies don’t internalize because they can’t do it as well or cheaply as someone else could.”

Honolulu sommelier John Fujimoto understands the pros and cons of vertical integration in the winemaking business.

“Being able to grow your own grapes is, I think, very important in quality,” Fujimoto says. “When you buy grapes you don’t get that opportunity to say the grapes are worthwhile or not. You don’t know what’s been done to them.”

“It’s good to see [Tedeschi] doing their own growing and doing everything themselves, and that it’s 100 percent made in Hawaii.”

He estimates that only 25 to 40 percent of American vineyards are vertically integrated. On the other hand, Fujimoto says, “You do spread yourself thin. You’re not an expert in everything,” he says.

The costs of vertical integration in the wine industry are huge. “The machinery used for the wine making, the cheapest is in the range of $25,000 to $50,000. And it’s about $100,000 for really good bottling machines,” Fujimoto says.