Honolulu Seawater Air Conditioning is scheduled to break ground this year on its cooling system for buildings in downtown Honolulu, says the vice chairman of HSWAC’s board, Bill Mahlum. Here’s a look at the system:

$145 million in tax-exempt revenue bonds, authorized by the state Legislature

At full capacity, the system will offset the burning of 178,000 barrels of oil a year by reducing electricity consumption by 77 million kilowatt hours.

2004: Plans first announced, with an initial target date for completion of 2009.

Second half of 2012: New scheduled start after construction delayed by permitting issues and the recession.

Negotiations with government and private landowners and leaseholders are proceeding and more than 70 percent of capacity has been reserved, HSWAC says.

Where the Pipes Will Be Laid 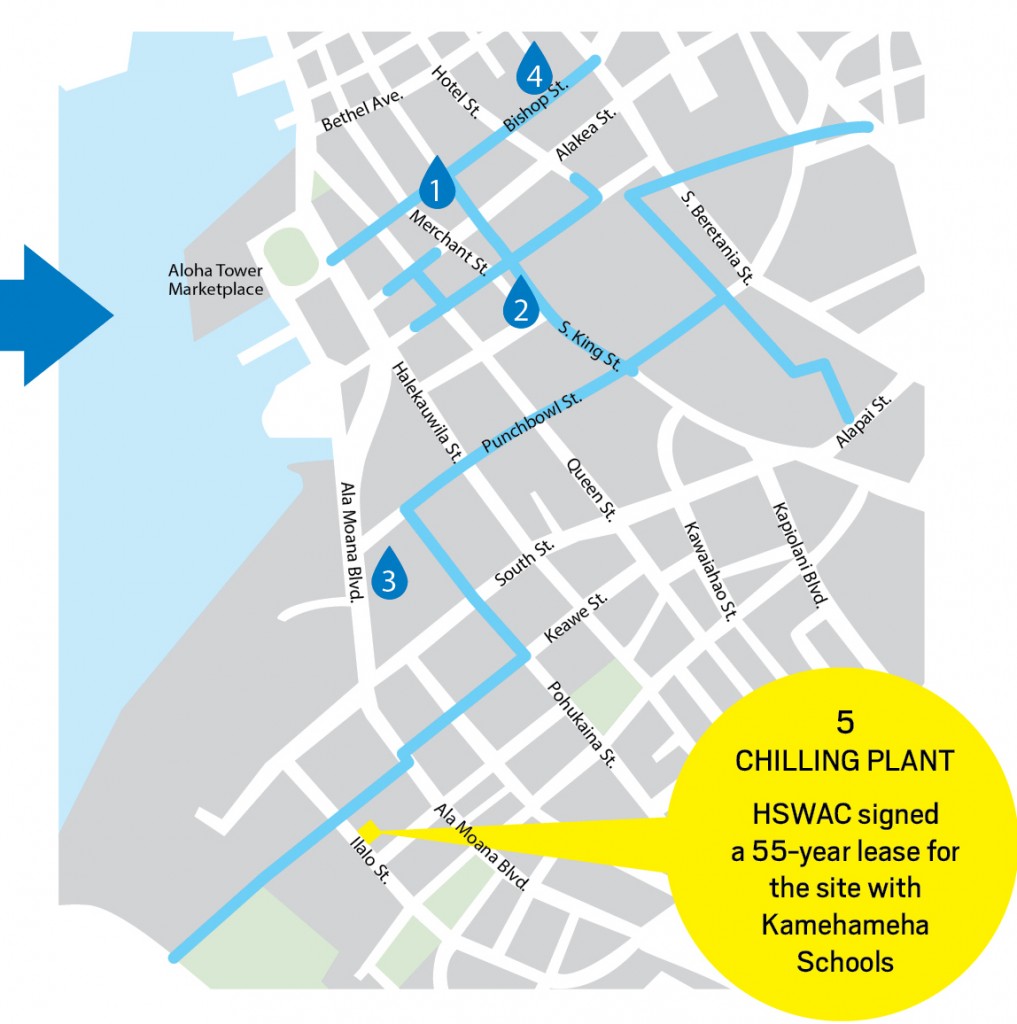 Seawater AC is also used at the Natural Energy Laboratory of Hawaii Authority in Kona. The system was installed in 1987 and continues to be expanded. It now supplies three buildings totaling 67,200 cubic feet.

Seawater air conditioning will save 260 million gallons of potable water that is used in conventional AC every year. Traditional AC systems also create more sewage discharge and greenhouse gases, and use more chemicals to treat their water than seawater AC, HSWAC says.

HSWAC says the project will generate more than $200 million in construction spending. Here are the main contractors and engineers:

Micro-tunneling: To be determined (Yogi Kwan Engineering as the engineer)

Distribution: To be determined (R.M. Towill as the engineer)

Plus many other contractors

HSWAC will save its customers money on their air conditioning, Mahlum says. “All customers as a group save money. Some save a lot of money, some save less, some won’t see benefits until the second year, but they all save money.” Contracts last 25 years with long-term, stable rates designed to grow at less than the rate of inflation.

Hawaiian Electric Co. was one of HSWAC’s first clients.

“We committed when it first came down and also urged other downtown buildings to consider signing up as well,”

says Peter Rosegg, HECO’s senior spokesman. “We’re committed to reducing our use of electricity in the Islands and, by doing that, also reducing the use of imported oil.”

Blue Planet Foundation, an environmental nonprofit, says it is excited to see the project move forward.

“It’s a great demonstration for Hawaii and we hope to see the technology used elsewhere in the Islands as well,”

HSWAC says it is planning a second seawater cooling system in Waikiki. The company is currently in talks with potential Waikiki customers, and says there is a high level of interest.