Maybe being a tree farmer means having the ability to look into the future: When Jonathan Keyser and Ethan Romanchak hold a seed, they can already see the tall, strong koa it will one day become.

So although there was almost no market for native Hawaiian plants when they founded Native Nursery on Maui 11 years ago, the partners aren’t surprised today to see their business thriving.
“We’ve just stuck with it until now, it’s as simple as that,” Keyser says.

The pair have found a unique market for specialized, high-end Hawaiian plants and trees, cultivated at their four-acre Kula site, largely from seeds and cuttings collected in the wild. While private landscapers make up about a third of their business, their biggest market is reforestation. They delivered about 150,000 plants to state reforestation projects in 2014, and they anticipate sales will keep growing through 2015 and 2016. 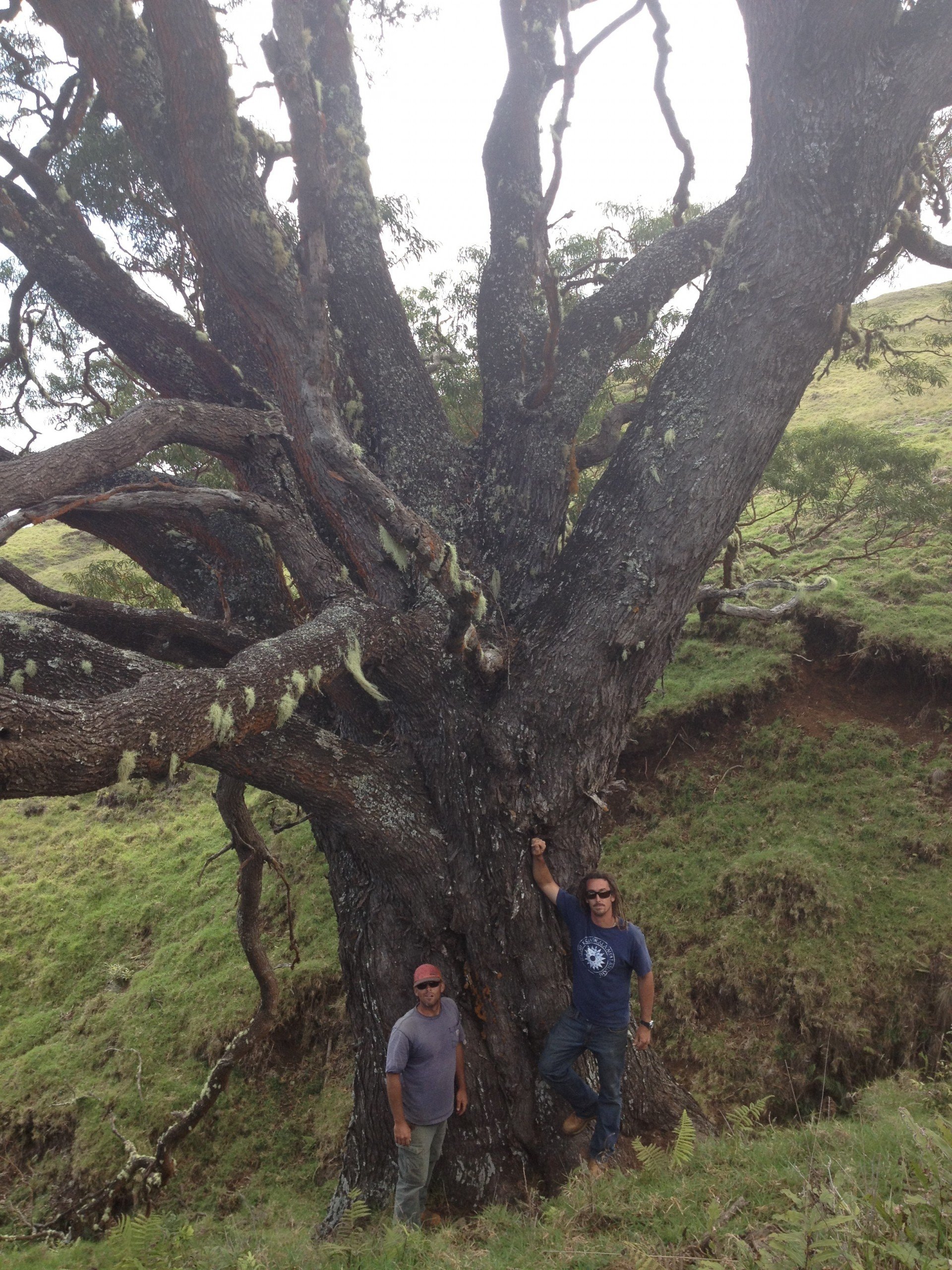 The partners at a koa tree in the Kahikinui Forest Reserve, which is on the south slope of Haleakala.
Photo: Courtesy Christine Waara

Factors driving demand include an infusion of cash into the state Department of Land and Natural Resources environmental programs, from private landowners paying environmental mitigation fees for wind farms and other major projects. It also follows the natural progression of decades-long conservation projects: Lands were set aside for protection through programs such as the Natural Area Reserve System in the 1980s, state agencies and conservation groups spent the 1990s and early 2000s on preservation measures, such as fencing and pest removal, and now those programs have moved into reforestation.

Romanchak and Keyser, who have backgrounds in horticulture and landscaping, respectively, say that, from the beginning, they avoided dime-a-dozen commodity landscaping plants like areca palms and monkeypod trees, choosing to compete on quality and specialization, not price. “We’d rather try something different, that’s difficult and complex,” Keyser says.

Romanchak says they found an unmet need by thinking about what people would be planting in 10 years.

“If I walk into Home Depot and think, ‘Why are there no native trees in my local nursery?’ you gotta figure there are other people thinking that, too,” he says.

They focused on learning to grow native plants that weren’t readily available commercially, starting with seeds or cuttings brought to them by state and nonprofit conservation workers, and sometimes trekking into private forests with permission to collect what they needed.

They learned through trial and error how to propagate many wild species, and improved their stock by selecting for hardier specimens over the years.

That specialization makes their product unsuitable for many landscapers, which is one reason the partners don’t actively market to that industry, Romanchak notes. Many of their plants are unusual, come from wild genetic material and are unproven in landscaped environments. Workers may need specialized training just to know how to care for them.

“We’re working in the upper echelon of horticulture,” Romanchak says.

What’s next? While contributing to the restoration of native forests has been financially and spiritually rewarding, Keyser and Romanchak long to see the development of a commercial forestry industry for Hawaiian trees like koa.

While Romanchak acknowledges that forestry – with a big up-front investment, significant risk and a 30-year payout – “makes no sense as a business model,” he sees it as an ideal enterprise to make productive use of unused pastures, abandoned plantation fields and other passive open space.

The partners are working on a contract with the Hawaii Agricultural Research Center to manage a koa-seed orchard being tested on Haleakala Ranch land. The project aims to cultivate seeds for hardier and more disease-resistant koa trees that could be planted for lumber.

With proper care and cultivation, Romanchak says, he feels Hawaii could cash in on global demand for its most famous wood.

“The ace in the hole is the value of koa. That will never go away,” he says. “I just know it could work, and I think it should be an industry.”

This article appears in the January 2015 issue of Hawaii Business Magazine.
Categories: Leadership