Not Made in Hawaii

When was the last time you went to a luau and enjoyed deep-fried onion ring chips with your squid luau and lomi salmon?

But Tim’s Cascade Snacks doesn’t care. The Washington-based manufacturer makes a lot of money selling its Hawaiian Luau Barbeque Rings even though there’s nothing Hawaiian about deep-fried onion rings and they’ve probably never been served at a real luau.

Tim’s isn’t alone. Hundreds of other companies worldwide steal the Hawaii brand to leverage their products and some local companies suspect the number of impostors is rising.

The state Department of Agriculture says it investigates complaints of products that are falsely labeled “Made in Hawaii,” but it does nothing against the much greater number of products that simply mislead customers with a Hawaiian brand name. There is no official measure of these phonies’ impact on truly local companies and the overall state economy.

“It’s sad, because a lot of these outside companies compete directly with local businesses that are actually manufacturing goods in Hawaii, employing local people and paying taxes here,” says Gary Hanagami, executive director of the Hawaii Food Industry Association. “That’s millions of dollars that could’ve been paid to local companies but aren’t. Big mainland companies can charge a cheaper price because their products cost less to make and are mass distributed all over the world.”

It is illegal to call something “Made in Hawaii” if it is not, but there is nothing illegal about labeling a product “Hawaiian” or “Hawaiian style.” It may be irresponsible and misleading, but it is not illegal. 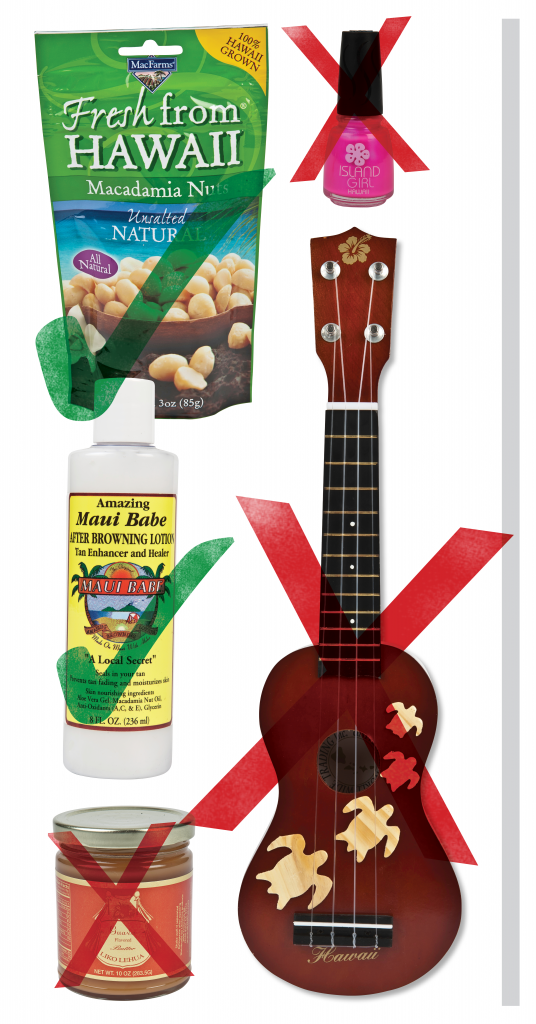 “Everybody wishes they were in Hawaii enjoying the surf, sunny weather and cool tropical breezes and the Hawaii name evokes all those things,” Leichleiter says. “That’s one of the reasons our chips have been so successful.”

Steve Connella, owner of Island Soap and Candle Works on Kauai, says the number of companies borrowing the Hawaii brand has increased over the years.

“Hawaiian anything, especially in the surf market, has the potential to be really popular. Especially in these times when sales might be kind of sluggish, people will do anything to make the sale.”

In 1996, Tim’s purchased the Hawaiian brand from the Granny Goose chip company, which operated a plant on Maui. Today, the company is based in Algona, Wash., and does not use any ingredients from Hawaii – not even in it’s Hawaiian Sweet Maui Onion Potato Chips.

Under current state law, a product that has at least 51 percent wholesale value added by manufacture, assembly, fabrication or production in the state can be considered made in Hawaii. The formula is simple, Hanagami says: You take the total of your local costs and divide it by your overall costs – imported and local. If your local costs are more than half, then you can claim your product is made in Hawaii.

A shortage of investigators isn’t the only thing hurting true Hawaii manufacturers. “If a company really wants to be deceptive and mislead consumers, it’s not hard,” Hanagami says. “There is room for a lot of gray area in the way people interpret their costs.”

For instance, a candy company could buy its chocolate and packaging from China or the Philippines but assemble and finish its products here and still call it made in Hawaii if the local expenses are more than half of the total expenses. While that rubs some local manufacturers the wrong way, the reality is, for most Hawaii businesses, it’s impossible to source 100 percent of their raw materials locally. Even if they could, many consumers wouldn’t pay the higher price.

“Depending on what business you’re in, you might not have any other choice but to purchase your goods and materials overseas, even if you have the right intentions and want to buy local,” Connella says.

His company produces all of its soaps and candles on Kauai but orders its lotion from California because there are no lotion formulators in the state.

For years, mainland companies such as Hawaiian Tropics and Hawaiian Punch have made a killing selling Hawaii-pegged products. A bottle of Hawaiian Tropics’ Dark Tanning Oil reveals it is distributed by Energizer Personal Care in Shelton, Conn., and made by a Florida-based company called Tanning Research Laboratories.

Similarly, Hawaiian Punch has been riding the Hawaii wave for more than 60 years. The brand is owned by Plano, Texas-based Dr. Pepper Snapple Group Inc., which markets more than 50 beverage brands throughout the U.S. The company’s website says, “The main ingredients of the first Hawaiian Punch recipe were shipped from the Hawaiian Islands, thus the origin of the name.” It’s unlikely that any of the ingredients in today’s version are from Hawaii.

A trip to any ABC store or Walmart reveals hundreds of knockoff “Hawaiian” products manufactured outside Hawaii – everything from Hawaiian-style condoms to toy ukulele and bogus kukui nut lei. But mainland companies aren’t the only ones using the Hawaii brand to attract customers. For example, the popular Liko Lehua line of rich, flavored butters originally started on the Big Island in 1995, but now is manufactured in San Diego. Nohea Kyle Yee from Liko Lehua says the company still is run and owned by kamaaina. (UPDATE: Dawn Kanealii purchased the company in September 2011. All ingredients are sourced in Hawaii and all products are manufactured on the Big Island, Kanealii says.) Similarly, those super-crunchy Maui-Style Chips that have become a staple at any backyard paina aren’t actually from Maui, or the state, for that matter. They’re made by Frito-Lay, with headquarters in Plano, Texas, and plants across the United States, but none in Hawaii. What about Primo Beer, the brew locals loved and drank back in the day at family parties? It’s now made in Irwindale, Calif.

Connella isn’t surprised. “The labor market on the mainland is much more affordable,” he says. When he purchased Island Soap and Candle Works in 1991, there was one other company selling Island soaps, “and their product was clearly from China,” he says. Today, the local market is saturated with similar misleading products.

Many local manufacturers, such as James “Jimmy” Chan, the owner of Hawaiian Chip Co., are committed to buying local materials whenever possible. Chan says more than 70 percent of the combined ingredients for his popular taro and sweet potato chips are purchased from local suppliers.

“If your product is made in Hawaii, I think that’s instantly added value to the product,” Chan says. “People tend to understand that, if it’s made here, it will cost more because of our isolation. But that also means we’re not for everybody.”

Chan says tourists who purchase his chips are specifically looking for quality, made-in-Hawaii products. “They care that it’s made here, whereas consumers who are value-driven and are only looking at getting the cheapest price probably won’t care where a product is made.”

The word “Hawaiian” in his company name is a big selling point. “After all, ‘Jimmy’s Chips’ could be from anywhere,” he says, laughing.

Hanagami of the Hawaii Food Industry Association would like to see more local retailers and manufacturers work together to push the sale of local products.

“We have a real opportunity to carve out a niche for ourselves and sell quality and authenticity,” he says. 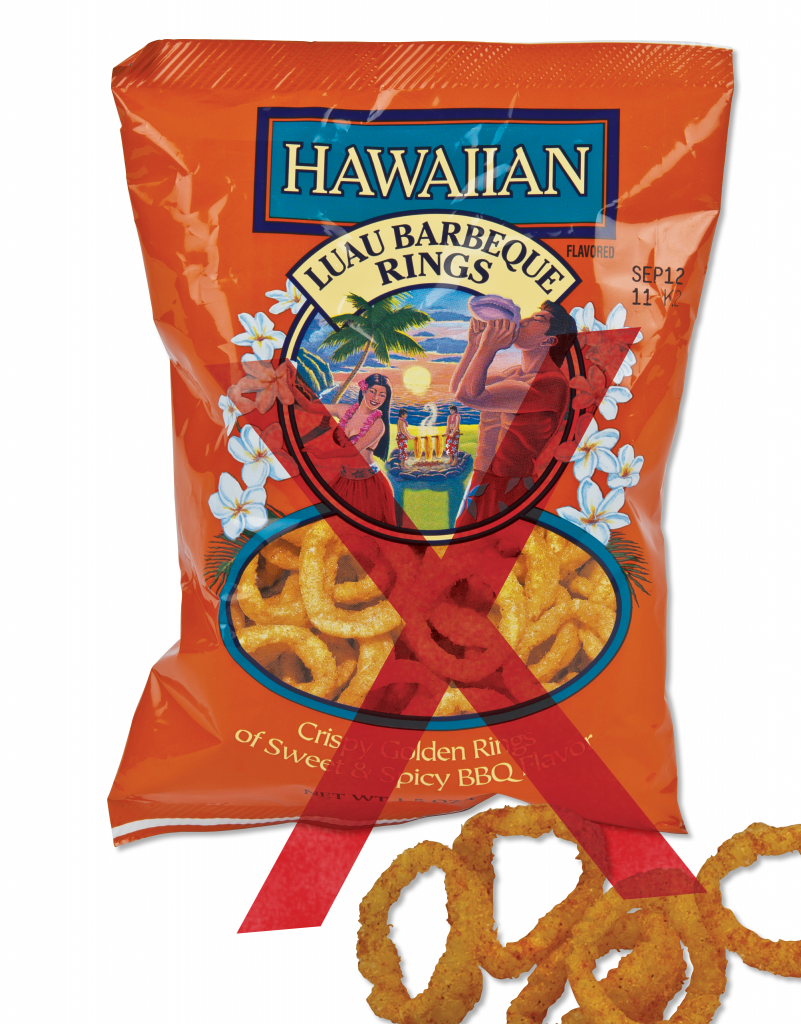 For true local manufacturers, the competition from fake Hawaii products is a challenge, “but there is a silver lining,” Chan says.

“The way I see it, if these products are promoting Hawaii and have a big reach on the mainland and internationally, that could be good for us small guys because it’s helping our state and the brand get more exposure,” he says.

Hawaii’s robust tourism industry means there is a built-in market for local manufacturers. In July, the average visitor spent $177 per day while in Hawaii.

“Our average annual visitor market is more than seven times our population,” Hanagami says. “People pay thousands of dollars to come here and Hawaii continues to be one of the top repeat-tourist destinations in the world. When it comes to providing the highest quality, freshest products, our local manufacturers can’t be beat. I don’t care who’s on the other side.”

Since 2009, the number of Agriculture Department inspectors responsible for enforcing state labeling laws on products sold in Hawaii has been slashed from six to three. “And six was already a reduction from previous years,” says Jeri Kahana, manager for the department’s Quality Assurance Division Commodities Branch. “People were laid off and those positions were never restored, so we’re pretty crippled right now.”

These same inspectors also monitor all commercial devices in the state involving a measuring apparatus, she says, such as gas pumps, scales and taxi meters.

“When you have to prioritize responsibilities, which is more important: making sure those devices across the state are accurate or looking at labeling on a bag of chips?” Kahana says. “Ideally, the state should be able to identify all of the unscrupulous companies that like to exploit Hawaii with their coconut-tree packaging and terminology on their labeling that make it seem like their product is Hawaiian, when it’s really not, but that has been a challenge due to lack of resources.”

The federal Fair Packaging and Labeling Act requires a label to include the identity of the product, the name and place of business of the manufacturer, packer or distributor, and the net quantity and contents. If the state discovers a product is improperly labeled, the Department of Agriculture can fine the company up to $2,000 per day for violating state laws and has the authority to temporarily halt sales until it’s proven that the label is accurate. However, the state does not have jurisdiction over products sold outside of Hawaii.

“If a company was mislabeling a product in another state, it would be up to that state, or it could even become a federal issue, to investigate and take action,” Kahana says. In Hawaii, she adds, “We give (companies) the opportunity to fix it and if they don’t, we have the ability to pull the product off the shelf for good and issue them a fine that’s pursuant to the violation.”

With so many products on the market claiming to be “Made in Hawaii” or “Hawaiian-style,” how can you spot the phonies? “It’s simple – check the label,” says Kahana. “Most companies that are legitimately manufacturing goods in Hawaii are proud of that fact and will mention it on the front of their packaging.”

The state Agriculture Department launched the Seals of Quality program in 2006 to protect the integrity and value of products manufactured in Hawaii. Items that use the seal have been reviewed by the state and are genuine Hawaii-grown or Hawaii-made products.  The department says only the best agricultural products in the state can bear the seal after meeting specific quality standards. “This is one way to give local manufacturers a competitive edge,” Kahana says.

Kauai and Hawaii Island also have their own marketing programs to promote products made on their respective islands. The goal of the Kauai Made program and the Big Island’s Mountain Apple Brand is to stimulate local industry and ensure the money spent stays on-island.

In August, more than 400 of the state’s local vendors participated in the annual Made in Hawaii Festival in Honolulu, which drew more than 35,000 attendees.

Disasters Can Shut Down a Business for Months. How Would You Pay for it?