“West Oahu has been a great community for us,” says Jason Higa, CEO of FCH Enterprises, the company that owns Zippy’s Restaurants and several other local companies. “We were fortunate to come in early and the first location has grown as the community around it has grown.”

Higa was part of a panel along with president and CEO of Highway Inn Monica Toguchi Ryan, president and co-owner of Gyotaku Restaurants Tom Jones and Janina Abiles, manager of client HR trainings & products at ProService Hawaii. Hawaii Business editor Steve Petranik moderated. They spoke about the business of restaurants during Hawaii Business Magazine’s SmallBiz Academy at UH West Oahu on Nov. 9.

The atmosphere during the pre-breakfast networking was lively and friendly. Representatives from sponsors HMSA, ProService Hawaii and Furniture Plus Design answered questions and got to know the attendees.

Jones said location has always been critical to the success of a restaurant, but the reason for its importance has changed for his restaurants. It used to be about being close to customers, he said. “Now it’s really more about location for employees: Where are we going to find employees to work in our restaurants?”

Abiles said that many people have moved to West Oahu and would rather work locally than make the daily drive into town. “There is an opportunity for employees who are looking to improve their work life balance and look for a great opportunity with a great company,” she said. 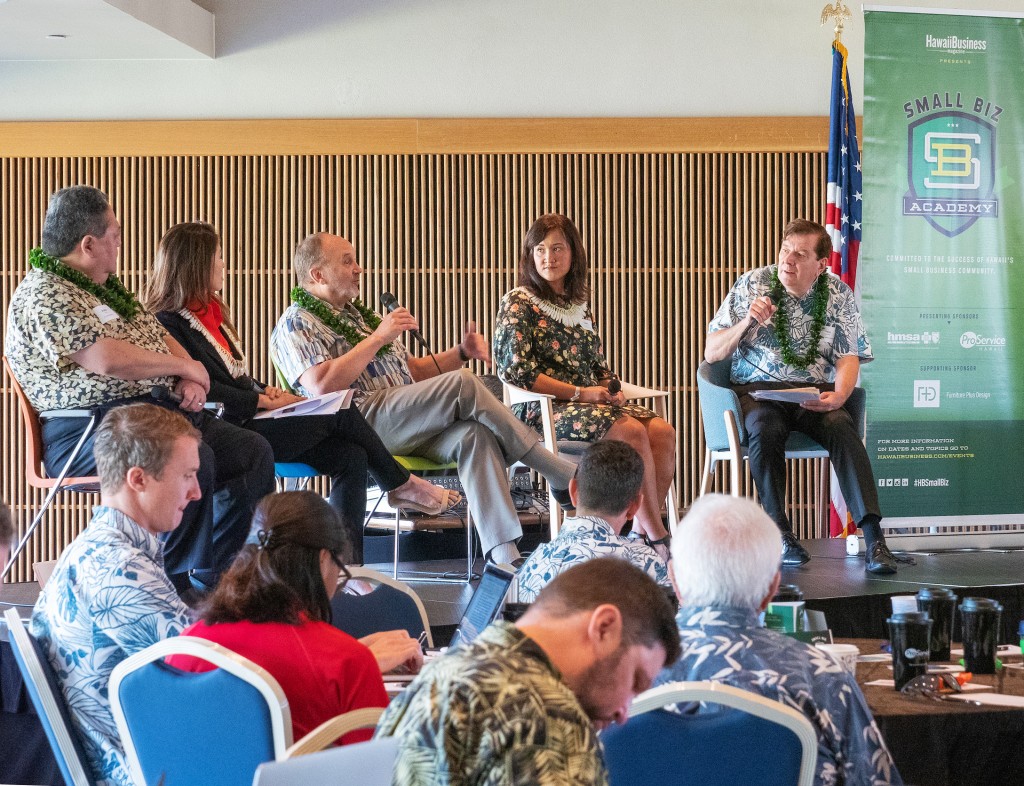 Hiring and retaining employees in the restaurant industry is a challenge in itself, according to the panel. Building a healthy and enjoyable workplace environment is key. To retain employees, Abiles said, companies should offer competitive pay, healthcare benefits, and growth and learning opportunities, and help employees save money.

The right workplace culture is important for creating an enjoyable environment for employees, but that culture can differ from one location to the next within the same restaurant chain. Toguchi Ryan compared the Highway Inn’s two locations: “I have (long-term) employees in Waipahu – one just retired after 50 years. I have back of house employees who have been there for 18 years. I would be lucky if I have staff in Kakaako that last one or two years,” she said.

That contrast is because of the different demographic of the workers available in the two areas. Kakaako’s workers are younger, often students, with different agendas.

That brought up another challenge that restaurants face: compensation and how to scale that with the minimum wage. A large challenge restaurants face is wage disparity between front of house employees (servers receiving tips) and the back of house (cooks and dishwashers). All restaurant owners grapple with that and each had enacted different policies to various degrees of success to narrow the wage inequality among their employees. They agreed that one way to narrow that gap would be for government regulators to increase the tip credit for employees who get tips in addition to their hourly wages. Currently, they said, employers in Hawaii are only allowed to pay 75 cents an hour less than minimum wage of $10.10 to tipped employees, even though their servers often make $20 or more an hour in tips. Meanwhile, their line cooks, food preparers and dishwashers might only make $15 an hour and no tips.

“We do all of our work and our community service locally … support the local community, that’s our strategy.”
–Tom Jones, president and co-owner of Gyotaku Restaurants

They said increasing the wages of back of the house workers means costs will go up, so menu prices must go up. As those prices go up, bigger tips will likely occur and increase what servers make over the back of house staff even more, Jones said. He said a higher tip credit – $5 an hour was mentioned – will help the back of house staff and reduce the wage disparity.

Retaining and growing a customer base can be a complex challenge for restaurants, especially when trying to tap into younger generations. Zippy’s has a customer base that has aged over the years, Higa said. “One of the challenges we face today is having brand relevance with younger generations.” Zippy’s has launched campaigns that partner with brands like PowWow and In4mation and that has helped build that relevancy, he said.

Toguchi Ryan faces a challenge marketing local food to a Kakaako customer base, especially tourists who often are not familiar with the menu. She and her company tell stories of the culture surrounding Hawaiian food, where it came from and why some of it is sacred. The stories build greater appreciation for the food, she said.