In 1999, Bob Hurley launched Hurley International, leveraging a successful and lucrative 15-year career as president of Billabong USA and forever changing the landscape of action sports. Three years later, Hurley sold his namesake company to Nike, and in 2002 the whole surf industry was in an uproar. It was a savvy business move that only a handful of surfers could understand the brilliance of Bob Hurley. While there was always the chance that a giant like Nike could potentially suck the soul of out Hurley, Bob’s leadership as CEO and president allowed the company and its culture to thrive in the last 15 years. With Nike’s backing, Hurley increased the performance of surf apparel, everything from board shorts to wetsuits, dry-fit t-shirts to compression tights.

Today, Hurley is arguably the coolest and biggest lifestyle brand in the international action sports market, and Bob is loving life as the brand’s founder, instilling passion in his people and looking at his role as a “servant” rather than a “boss.” Before he speaks at the keynote talk story of our Leadership Conference on Thursday, July 27, we wanted to ask Bob about his style of leadership, surfing and magic.

Q: Who was the first business person that you looked up to, and what did you most appreciate about their style of leadership?

A: You know, I’ve never really thought about this, but I’m gonna go ahead and say my dad. I used to work with my dad when I was younger, and although I didn’t particularly enjoy it, I really looked up to the way he got his job done, he ran his company and got his people motivated. I don’t replicate everything he did, for sure, because of the different time and different people. I was kinda blown away at 16 years old going, “wow, how do you get grown-ups to not only obey, but to be excited about the mission you’re on, and how do you get them excited and invested, and feeling like it’s theirs to do, not yours?” So I used to watch that with my dad, you know, not that he was the management genius or anything, but it made a giant impression on me as a 16 year old.

Q: What is a signature of your leadership style?

A: My goal is that I would want people to think of me as a person that helps them achieve their vision. And so whatever their vision or their role is with the company, I wanna help them be as good as they can be at it. I don’t wanna be their teacher, their leader, their instructor, I wanna be their servant.

Q: Why is surf culture an important component of your business?

A: Well we are based on surfing. We were born in the water as a brand, and I personally and my whole family live and revolve around the ocean, and we draw a lot of energy and life from it and sustenance. But really why the culture of surfing – and kind of why we like working with Sig Zane is – the culture of surfing is so much more rich than just the act of surfing, and there’s so much to it, and it all ties in together. Pretty much everything I’ve learned from life, I’ve learned from the ocean, and certainly there are good examples along the way, like my mom and my dad, and like other people you meet, but real lessons about life and living and why you’re here and what it takes to survive, you can really learn from the ocean.

Q: Where do you find are the most productive places to cultivate culture in Hurley?

A: You know everyone has different leadership styles. People that are smarter than me lead a different way than I do, which is fine. So I only know intimately how I want our company to be, and where the inspiration comes from, and inspiration or cultivation of cultures can come from anywhere. They can come from standing in line at the grocery store. It can come from conversations on an airplane. It can come from long lulls in the lineup when you were just wishing there was another wave.

And so it can come in so many places, I think the real key to cultivating culture is to pay attention to it, because culture is really just a bunch of interpersonal relationships that people have, and they strive towards a common goal of what the culture is trying to achieve. And I’ve found the least productive, the very, very least productive, although sometimes, the only way to get it done, was to have formalized structure. You know if you have a large group of people, you gotta formalize leadership summits and some different things you need to do at work to form a company culture. But if you have a small enough company, like we are still under 300 people globally, so we can still walk around from office to office. We can still take someone to lunch. We can still have coffee. Informal stuff while you’re at the water cooler, you know, a lot of stuff happens like that I think even more than the formalized. 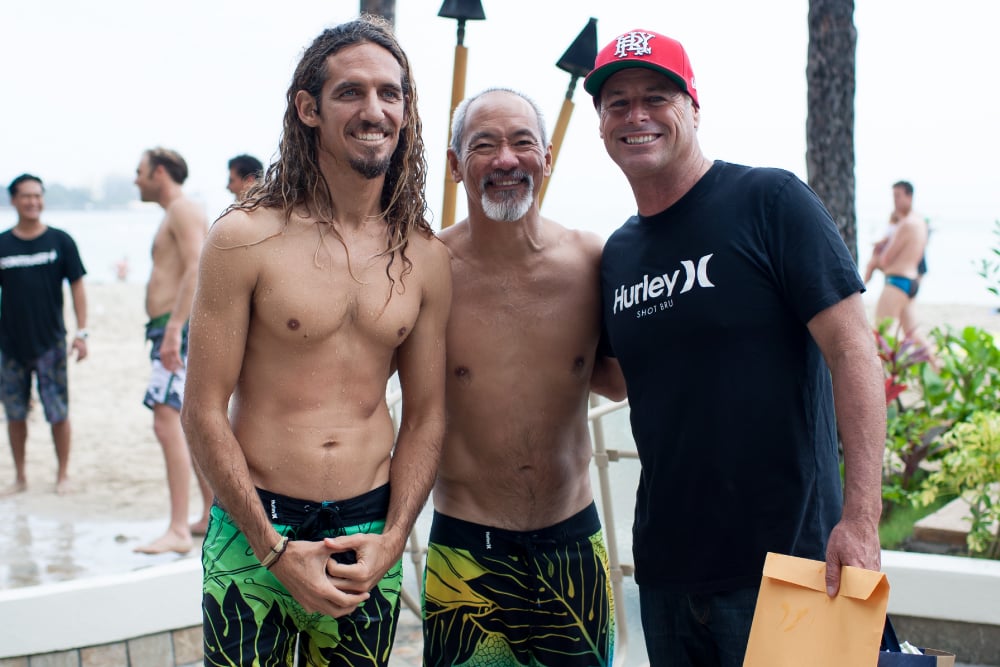 Sig and Bob with pro surfer Rob Machado at Duke’s.

Q: When was the first time you felt like Hurley was successful and the future of the company was bright?

A: Well, I’m an eternal optimist so I always, 100 percent, since day one thought that the future of Hurley was bright because I feel like we want do the right things for the right reasons with the right people. I feel we have a reason to exist, and it’s our destiny, which is a whole other long story. Everybody doesn’t believe in destiny, but we do.

For Hurley, being successful, it comes whenever we feel like that, it comes on a daily basis: an interaction over a product or something like that. Or, I could be walking down an alley in my neighborhood and a young kind gives me a high-five because they like our new t-shirt, new clothes, new ad campaign, John John (Florence) just won the world title or Carissa Moore is having a parade. Those all feel like successful moments.

But in the end, we are driven so hard and so passionate, and hard on ourselves, that it really never feels like job done: job complete. There’s always so much more to do. Regarding success, we think of more in terms of full potential than just absolute success. So there’s always so much more potential we have, and so it keeps us striving, working hard and we like that.

Q: What is your day to day like when you’re in the Hurley office?

A: My day to day life is really, really good right now. I’m doing exactly what I love to do. My whole career, I wanted to work with top athletes, to collaborate with top artists and really try to create magic. When I say that, I’m not the person with the magic. Like a chef can assemble the right ingredients, I’m pretty good at finding people who have magic, and assembling them together for the greater good of a product or experience for a consumer, or helping the planet in general.

Q: So what is your current role/title at Hurley?

A: I’ve had so many roles with the company, actually all of them, but my latest manifestations have been CEO, interim CEO, President, but you know that’s all over the last 10 years, but right now, I guess you would just call me, “Founder.” I have a CEO, I have a really good team there including many of my family that are in upper management there so actually I act everyday as the Founder.

When I’m in town I’ll go into the office, like one or two hours a day, I went this morning. But I travel a lot and I really prefer being in the field with the athletes, or actually I prefer being in the office too when it’s brainstorming. Wherever I can be where there’s energy, there’s magic and I can learn from people that’s where I like to be.

Q: After being a successful entrepreneur for so many years, what is one thing you learned about running a business?

A: I’m pretty old now, and what you find out the older you get, is that the old cliché about being in kindergarten: you just want people to like you and want to be on a good team. Business is not complicated, we make it complicated. The most successful business are very pure, very authentic, including giant ones like Apple. That business is giant because Steve Jobs had a passion, and he had a desire and he made it purely authentic. It was strictly to please him. That green, yellow, red button on your phone, that wasn’t a focus group, that was for him, he did all that stuff himself.

I think any of these young business people that are passionate, that can really trust their instincts, and really are seeking a truth are going to do fantastic. I think when businesses fail it’s when they’re not authentic and they’re trying to pull off some kind of scheme, which sometimes the schemes work and sometimes they don’t. But the truly major successes – Nike, Apple, Microsoft, Facebook – their passionate endeavors that weren’t invented for money really.

Want to hear more from Bob Hurley? Register to attend the Hawaii Business Leadership Conference on Thursday, July 27 to hear Bob and Sig Zane in the morning general session, “Cultivating Culture In Your Company.”