Tattoos in the Workplace Are an Evolving Issue in Hawai‘i

We talked with lawyers, companies, a tattoo artist and other people about what can be prohibited and what should be allowed.

Visible tattoos, once a no-no in many local workplaces, are now more often a yes, a maybe or “it depends.” But beware: In some cases, companies need to act carefully because a hiring or firing decision based on a visible tattoo could have legal consequences.

Even Disney, which has a 20-page book-let called the “Disney Look” that governs the appearance of costumed and non-costumed “cast members,” has opened up to tattoos.

The latest edition of the booklet says: “Visible tattoos are permitted, with the exception of placement on the face, head or neck. Tattoos must be no larger than the cast member’s hand when fully extended with the fingers held together.”

Similar rules now govern visible tattoos in many American workplaces, which have responded to the growing popularity of tattoos, especially among young adults. A 2019 poll by Ipsos, a major national polling firm, reported that 30% of Americans have at least one tattoo. That’s up from 21% in 2012.

Kalani Morse, an attorney and partner with Durrett Lang Morse, a law firm based in Honolulu, says that when making a hiring or employment decision, employers should be mindful of state and federal laws prohibiting discrimination based on someone’s race, religion, national origin or other protected categories. That means it might be illegal to fire someone (or not to hire a person) based on a visible tattoo that is tied to one or more of these protected categories.

Just as workplace dress codes should be gender neutral, it doesn’t make sense to have different rules on visible tattoos for men and women, Morse says.

“Obscene depictions, offensive hate speech and related slurs that are visible to customers and co-workers would likely meet the standard of prohibited tattoos for many employers. The larger and more visible the tattoo, the more likely it would be found offensive or inappropriate,” he says.

On the subject of religious tattoos, an analysis or investigation would be required to determine if any particular tattoo is an expression of a valid religious belief and practice, Morse says.

Rod Bridgers, an attorney and owner of the Law Office of Rod Bridgers LLLC, agrees that federal and state anti-discrimination laws should be followed when creating a policy on visible tattoos in the workplace. The cultural and ethnic significance of tattoos should also be considered, he says.

Not hiring someone because they have a visible Native Hawaiian tattoo might be considered discrimination because it would prevent that person from expressing their religious or cultural beliefs, according to Bridgers. He says that Native Hawaiian tattoos, called kakau, might be equated with a Christian wearing a cross tattoo or a Jew with a menorah tattoo.

“I think that as tattoos become more and more acceptable in society, as they have become over the last 20 years, I think we’re going to continue to evolve in our beliefs and someday there may be a case that says what’s an appropriate tattoo and what’s not an appropriate tattoo. But right now, I don’t know of any such cases,” Bridgers says.

He doesn’t think the size of the tattoo matters, but he believes the content and location does. Someone with a swear word tattooed on their forearm may be asked to cover it up at work, but if that person has tattoos all over their face, those would be hard to cover – and that’s something that should be considered when deciding to hire someone to work in a public place, he says.

Tattoos Based on Ancestry

He says that people who are critical of those with visible tattoos in general either don’t understand the significance of the tattoo or they assume that all people with tattoos are rebellious.

Makua says there has long been even greater stigma against women with visible tattoos than men.

However, he believes the world is slowly catching on to the tattoo culture – as well as the piercing culture – and that eventually, visible tattoos will be more often viewed in a positive light and will be more accepted in the workplace.

Hawaiian Airlines allows employees who are not in guest-facing positions (like baggage handlers, cargo agents and employees at corporate headquarters) to have visible tattoos that are not offensive. Employees who interact with customers (like flight attendants, guest service agents and pilots) cannot have visible tattoos. Marissa Villegas, a senior specialist of external communications at the airline, says the policy takes into consideration people who are sensitive about tattoos.

However, the airline is willing to make exceptions for those employees with visible tattoos that are culturally Hawaiian, Villegas says. All in all, she says, Hawaiian Airlines encourages their workers to maintain a professional appearance at work. 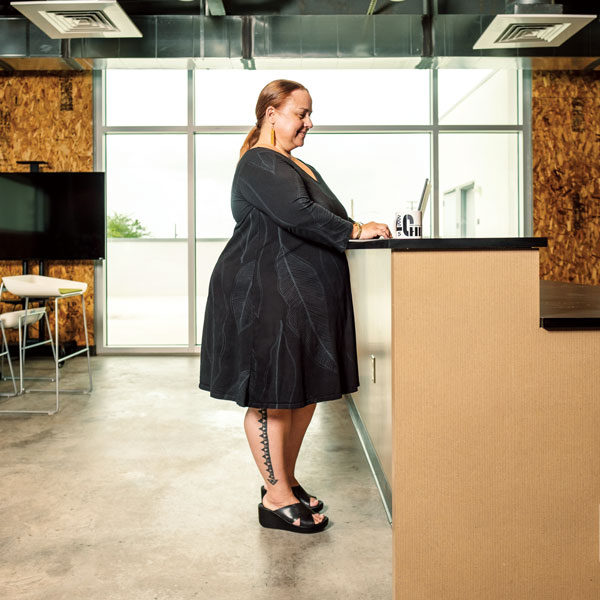 Servco Pacific employees are encouraged to be their “authentic selves,” while upholding the company’s core value of being respectful to their customers, co-workers, business partners and community, says Jondi Anderson, director of human resources and labor relations.

She personally believes tattoos are part of one’s identity and can tell a story. One of her four tattoos is a kakau that connects her to her Native Hawaiian ancestors and genealogy.

“My son has been begging for his kakau for many years,” she says. “Having turned 18 last year, he became more adamant about getting it – spending countless hours researching his genealogy. I caught myself telling him, ‘No, you can’t get it until you decide what career you want to have. You don’t want it to jeopardize your ability to get a job.’

“His response was, ‘This tattoo will mean more to me than any job – if I will not be accepted by a company because of my tattoo, I do not want to be there.’”

Does It Affect Performance

When creating a policy on tattoos in the workplace, Anderson thinks that employers should consider many things, including the connection between one’s appearance and their ability to do their job. They should also consider the consequences of excluding someone because they don’t fit a certain look and the message the company would send their employees by doing that, Anderson says.

City Mill created a policy in mid-2019 that allows team members to have visible tattoos, says Shannan Okinishi, marketing manager for the hardware store chain. She says the change reflected society’s changing attitudes, including toward tattoos and body piercings.

Okinishi says the company allows for “reasonable self-expression” and an HR manager would determine on a case-by-case basis if a visible tattoo is offensive.

“So, our actual policy says that if management determines an employee’s tattoos are offensive to co-workers, customers, vendors or others in the workplace, based on racial, sexual, religious, ethnic or any other characteristics or attributes of the sensitive or legally protective nature, the employee will be required to cover the tattoo. So that’s the wording on our policy [that] each team member agrees to in order to be employed here.”

Okinishi advises other companies to base their tattoo policy on the company’s core values and the employees’ values, as every company is different.

Dr. Shim Ching, board-certifed plastic surgeon and founder of Asia Pacific Plastic Surgery Inc., says people in the hospitality industry often want their tattoos removed. Ching notes that some cultures, such as Japanese and Korean, generally look down on someone with a visible tattoo working in a hotel or restaurant.

“I’ve had patients who’ve had tattoos on their hands or their wrists, and they’ve had to get those removed so that they could get the job they want,” he says.

“Even the military, where there’s a long-standing tradition of people having tattoos, I’ve had patients who have told me that things change. At some points, visible tattoos are just fine, it’s not an issue. At other points, it depends on the commanding officer or the branch of military and so on; they’re not supposed to have any tattoos that would be visible when they’re wearing their uniform.”

Ching says it’s harder to get a tattoo removed than to get one in the first place. The factors to consider are the cost, time and discomfort. His practice uses PicoSure lasers and the pulse of the laser feels like a rubber band snap; the discomfort ranges from mild to intense and depends on the tattoo’s location and the individual’s pain tolerance, according to Ching’s website.

Aaron Yoshino, staff photographer for Hawaii Business Magazine and its sister publications, is a big advocate of tattoos. He says it’s not right for companies to make a policy to dismiss an employee if their appearance or their skin color makes someone else uncomfortable. The same consideration should apply to tattoos.

Yoshino knows people who, when they get tattoos, purposely put them where they can be covered at work in case a future employer might reject them.

“I chose to get three-quarter sleeves on my arms because they are completely hidden by a long-sleeve button-up shirt and blazer. Many tattooed people choose to get tattoos in areas that are concealable in the most ‘professional’ of settings, mostly because we don’t want to deal with employers who will question our choices, not because we see our choices as ‘wrong,’ ” he says.

He believes kakau worn by Native Hawaiian people should be exempt from workplace restrictions, much like religious pieces of clothing such as the Jewish yarmulke.

This article appears in the October 2021 issue of Hawaii Business Magazine.
Categories: Lifestyle