Hawai‘i’s average annual wages, adjusted for inflation, have only increased 16% since 1969.

Wages have increased more than eightfold since then, but the prices for goods and services in Honolulu have increased a lot too. In 1969, the Consumer Price Index was 39.4; in 2020, it was 286.008 – an increase of more than seven-fold.

The wage data comes from a survey of employers who provided the total number of full- and part-time jobs they have and the total amount of their payroll, says Eugene Tian, chief state economist with the Hawai‘i Department of Business, Economic Development and Tourism. The numbers do not include self-employed jobs.

Tian says the wage increase after accounting for inflation wasn’t bigger due to tourism’s dominant role in the local economy. Tourism jobs often pay low wages and have a higher proportion of female and young workers, who tend to be paid less than their counterparts in other industries, he says.

One factor that drives wage growth is increases in productivity. After accounting for inflation, productivity in Hawai‘i grew an average 0.76% each year from 1969 to 2020 while wages grew by an average 0.29%

Tian says productivity in Hawai‘i is measured by dividing the real gross domestic product by the total number of jobs. However, this productivity measure only tells part of the story. Increases in investment and technology can also yield increases in productivity, but an econometric analysis and additional data are needed to calculate that impact.

The state’s minimum wage increased to $12 an hour in October. Under Act 114, passed this year by the state Legislature, the minimum wage will increase $2 every two years until reaching $18 in 2028, making Hawai‘i the first state to enact such a high minimum wage.

Over 192,000 local workers are expected to benefit from this policy, according to the National Employment Law Project, which advocates for workers’ rights. That includes more than 110,000 women and 168,000 workers of color.

Gavin Thornton, executive director of the Hawai‘i Appleseed Center for Law and Economic Justice, says this increase is long overdue. The center has pushed for an increase for years, and Thornton says he thinks this year’s efforts were finally successful because of a broader awareness that Hawai‘i’s economy is no longer working for ordinary people.

An estimated 59% of local households experienced financial hardship because of the pandemic – that’s about 78,000 more households than pre-Covid, according to the Hawaii Data Collaborative. Those households include working families that can barely afford housing, transportation, child care, health care and other necessities, plus families living below the poverty level.

Thornton says the minimum wage should be a living wage: “As a society, we should have a principle of anyone that’s working 40 hours a week should be able to put a roof over their head and food on the table,” he says. “My hope is that is gaining broader acceptance.”

He adds $18 an hour is not enough for a minimum wage worker to get by today – and it likely won’t be enough in 2028 because of increases in inflation. Hawai‘i, he says, will need to keep that in mind when 2028 rolls around. “But it’s going to be a dramatic improvement and one we’re very excited about.” 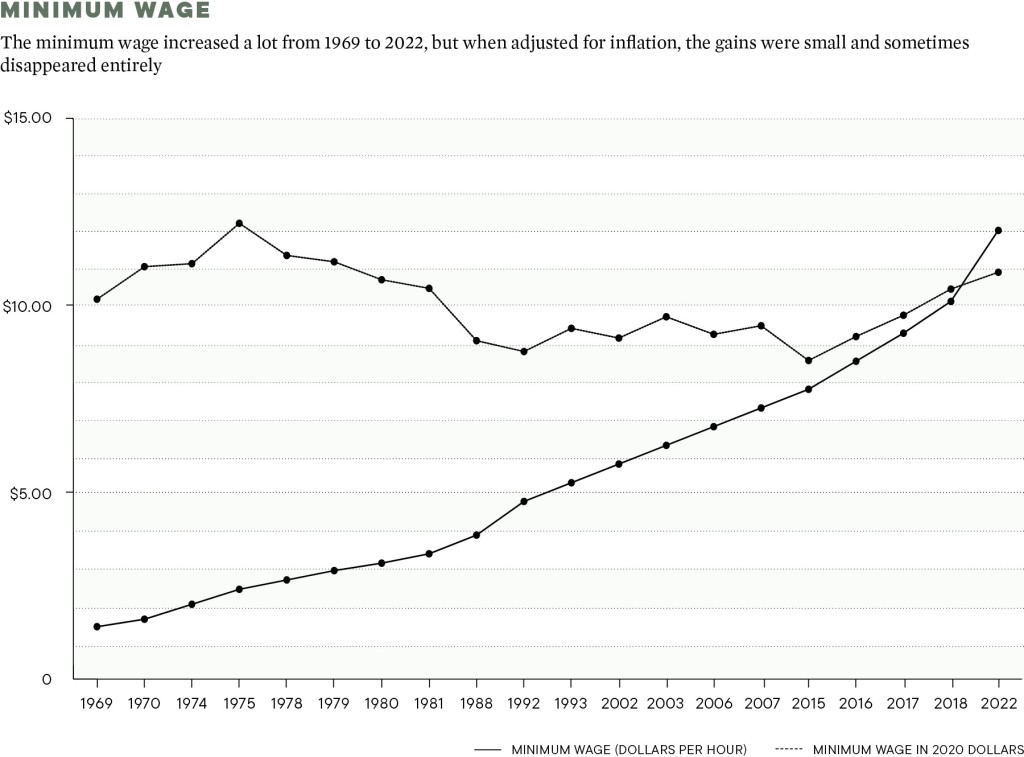 How Much Money Local Families Need to Afford Necessities Today

These numbers come from DBEDT’s self-sufficiency family budgets. The department established these budgets in 2008 at the request of the Legislature and updates them every other year.

It’s More Common for People to Hold Multiple Jobs in Hawai‘I Than Elsewhere in the U.S. 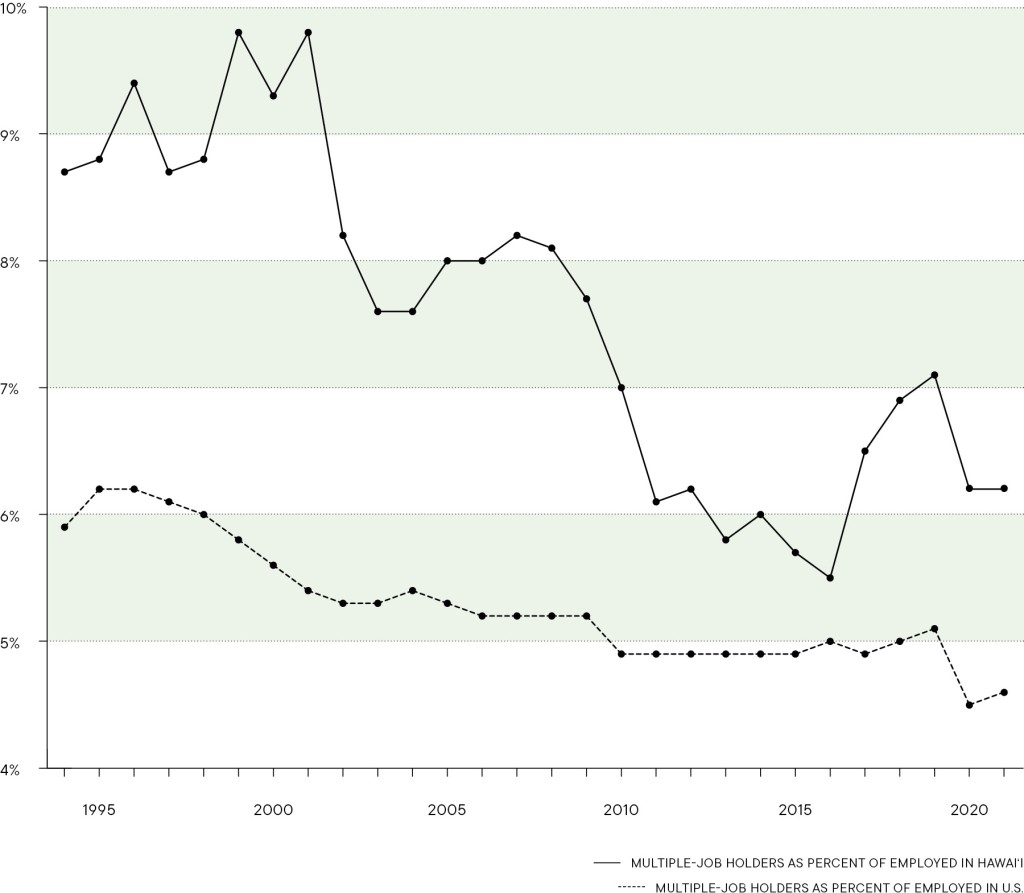 The percentage of local workers with more than one job has been declining over the last 27 years. The number of people holding multiple jobs typically decreases during recessions because workers may lose their second or third gigs, Tian says. It typically takes about seven years for the job market to recover after a recession.

Tian adds that it’s hard to say exactly why the percentage of people with multiple jobs is shrinking, but one possible reason is that workers have other ways to make money, such as off-the-books jobs.

“It is possible that people get paid by cash and do not need to report as multi-job holders,” he says. “This means the underground economy may be increasing. We don’t have data to do estimates.”

Wages generally only make up 53% of total income, and many higher-income families, for example, supplement those wages with income from investments. Low-income workers mostly get their earnings from wages and government assistance. 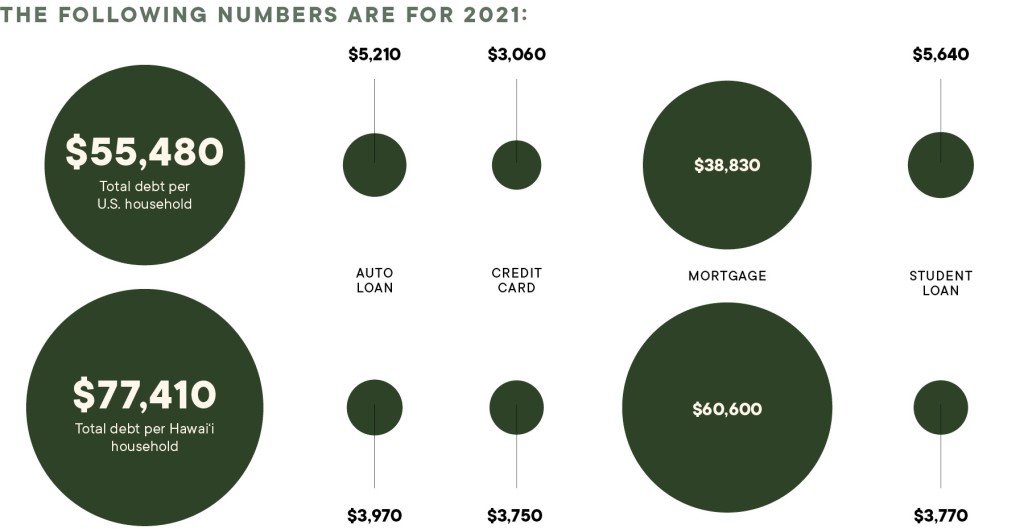 Mortgages made up 70% of household debt for the U.S. in 2021, according to the Federal Reserve Bank of New York.

But locals have one of the lowest shares of student loan debt in the nation, Tian says. In 1999, student loans made up 1% of total debt in Hawai‘i. That share gradually increased to 5%, where it’s been since 2013. Tian says this is partially attributed to the rising cost of higher education, but the low percentage compared with the rest of the United States also points to the fact that many local students are supported by their families. The national rate was 10% in 2021.

Plus, resident tuition at the University of Hawai‘i is often lower than tuition at mainland schools. Tian says: “The student loans include Hawai‘i residents who went to schools on the mainland as well. Culture and lower tuition at UH system are the main reasons” for the relatively low student debt load in the Islands.

Housing Prices Outpace Wages for Both Buyers and Renters

Over the last 11 years, the median sales price of a single-family home in Hawai‘i increased 81% and condo prices 65% – far more than average wages increased.

But the largest year-over-year increases were seen during the pandemic. Statewide, the median price of a single-family home jumped 18% from 2020 to 2021; condo prices increased 13% (single-family homes: $880,000; condos: $510,000). Kelly Liberatore, president of the statewide Hawai‘i Realtors association, says the housing market was inundated with multiple offers brought on by high demand, record low mort-gage rates and limited supply. The market hadn’t seen anything like that in the past.

Gross median rents statewide increased by 31% between 2010 and 2020. O‘ahu gross median rents increased the most at 36%, followed by Hawai‘i and Kaua‘i counties, which both had 20% increases. These percentages are based on five-year estimates from the U.S. Census Bureau’s American Community Survey. Such estimates were not yet available for 2021. According to the Hawaii Data Collaborative, these numbers offer little insight into the pandemic’s impacts on rents as Covid hindered the Census Bureau’s data collection in 2020.

Justin Tyndall, an assistant professor of economics at UH’s Economic Research Organization, says asking rents – based on Craigslist data – have steadily increased during the pandemic. Median asking rents in the first eight months of this year were up 10.9% statewide, 11.1% on O‘ahu, 36.6% on Maui and 9.4% on Hawai‘i Island compared with the same period in 2021. The sample size on Kaua‘i is too small to accurately report.

Tyndall says Maui asking rents have increased so dramatically because its supply has not kept up with demand. While there are some new affordable rental housing projects in the works, such as the 120-unit Kaiāulu O Halele‘a in Kīhei, the 200-unit Kaiāulu o Kūku‘ia in Lahaina, the 324-unit Kaulana Mahina in Wailuku and others, Tyndall says it’s not enough. According to the 2019 Hawai‘i Housing Planning Study, Maui needs 5,799 new rental units between 2020 and 2025 and 4,605 more ownership units.

“In the scheme of the whole market, it’s a pretty small amount, and the amount that has actually come online is even much smaller,” he says. “So I think ultimately it’s a story about a lack of housing options for people. It’s going to, over the long run, drive up rents.”

• In 2020, median-income families were earning 96.5% of the qualifying income needed for a mortgage on a median-priced single-family home, according to UH’s Economic Research Organization. This assumes that 30% of after-tax income is used for mortgage payments.

• In 2020, median-income families were earning 158.6% of the qualifying income needed for a mortgage on a median-priced condo.

• The number of cost-burdened renters has remained relatively consistent, hovering between 55% and 57% over the last 10 years, according to the U.S. Census Bureau. Cost-burdened means renters paid at least 30% of their household incomes on housing. 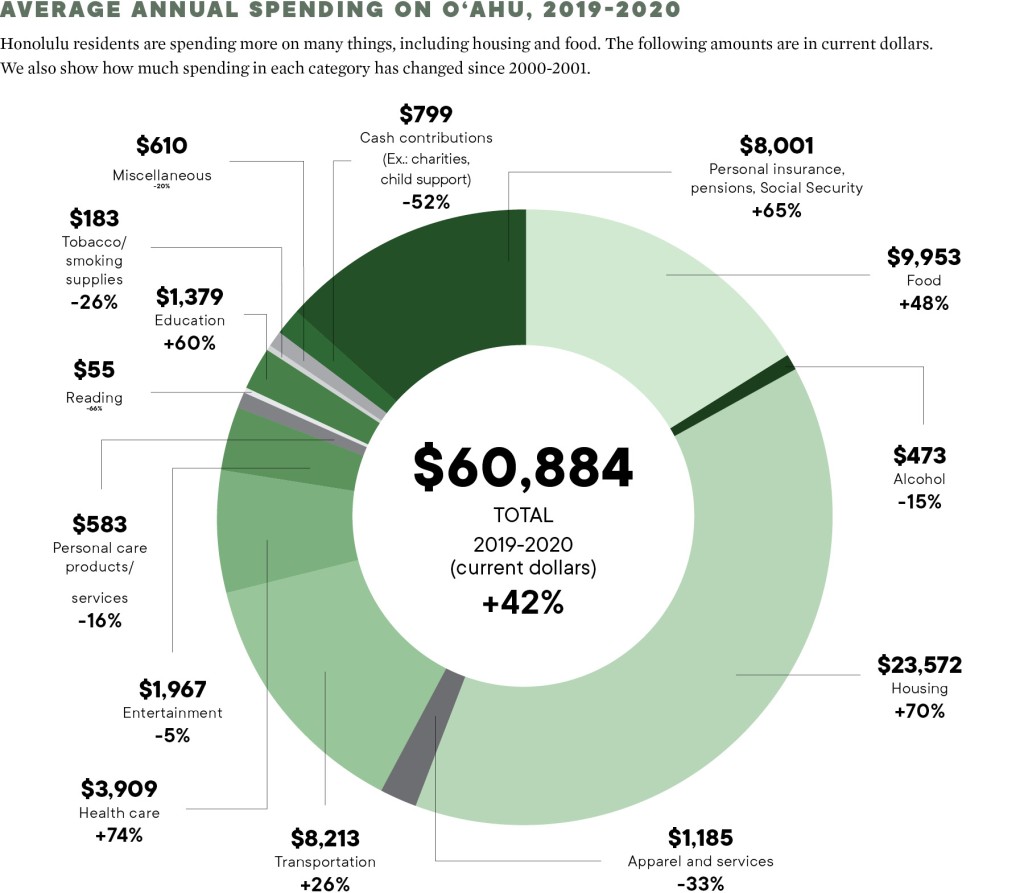 Locals spent 104% more on utilities, fuel and public services in 2019-2020 compared with 20 years ago. Tian says this increase is mainly due to the higher cost of electricity, water and cell-phone and internet service.

Each Part of O‘ahu Has a Unique Real Estate Market