Caitlyn Laborte is a sophomore at Pearl City High School, but she’s already been to Wall Street and had a glimpse of a possible future for herself in finance.

Laborte and 50 other students from Hawaii talked finance with the managing director of Morgan Stanley, George Van Amson, and with Michael Maii, an Iolani graduate and executive director at Morgan Stanley. They also visited the New York Stock Exchange, the trading floor of JP Morgan and the American Museum of Finance, with all expenses paid under a program organized by the Akamai Finance Academy.

“We met people from Hawaii who were working on Wall Street,” Laborte says. “By going to New York, we could see what we could be doing.”

The academy is run by the Akamai Foundation, a nonprofit that educates individuals about investment banking, private equity and asset management, and about leveraging Hawaii’s advantages to succeed in those fields and others.

The foundation began with a handful of MBA students at the University of Hawaii’s Shilder College of Business who were thinking about how to prepare themselves and others to succeed in the finance industry. Using grants to finance their work, they built a curriculum for undergrads at UH and at Leeward Community College, and opened the program to high school students in 2009.

The Akamai Finance Academy’s 23 Hawaii high school chapters are after-school clubs that require a commitment of at least one hour a week. One key tool that the clubs use to learn about finance isBloomberg Pro, an online service that provides real-time financial information from around the world.

“We’re preparing the students to give them the skills to apply for an entry-level position but also have the skills of an industry veteran,” says Johnny Chankhamany, president of the Akamai Foundation. 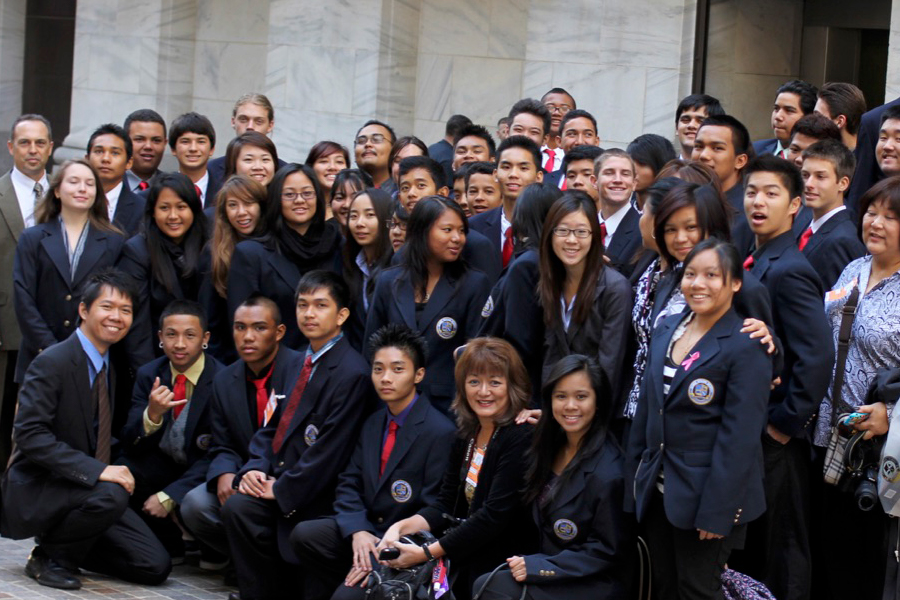 Each Bloomberg system has six monitors and costs $7,500 a year, money which the students are required to raise. Students compete in stock-market simulations, perform research, submit trade recommendations and compete against other high-school chapters as if they were individual investment firms. Each school chapter starts the year with $1 million in fictional money to invest and, when this article was written, Radford High was in the lead with a profit of $220,000.

Chankhamany says the academy’s first field test was at Nanakuli High School, where the foundation’s CEO, Louis Perez, taught corporate finance to seniors. “People from socioeconomically depressed areas are the people we want to help most,” says Chankhamany.

Perez himself is a graduate of Waianae High School and received a BBA in finance and an executive MBA with a focus on mergers and acquisitions, both from the Shidler College.

Laborte, the Pearl City High sophomore, says the academy helped shift her career goal from the health field to finance. She adds that the Wall Street trip helped her understand what finance jobs require and how to prepare. All expenses for the students’ trip were paid by the Native Hawaiian Legal Defense and Education Fund.

The three-day trip was the academy’s first to New York, but Chankhamany says the nonprofit hopes to organize similar trips to Asian finance capitals such as Hong Kong. Many of the academy’s students have family roots that might help them in Asia, says Chankhamany, adding, “It’s actually easier to get into Asia (finance) than New York, because there you’re competing with the top guys.”

The academy seeks out successful people in finance from Hawaii to talk on their weekly web casts for the students.

The college chapter is for individuals interested in a finance career. Chankhamany says students must sign up by their senior year of high school and continue the program through college, for a total of five years, while committing 20 hours a week to the academy.

“We’re not looking to replicate what you experience in college. We strive for the real-life experience,” he says.

To find out about how high school chapters operate, visit the McKinley website: www.afamckinley.com.