Going, Going, But Not Yet Gone: Gender Bias in Family Businesses

Gender bias still exists within the leadership of many local family businesses, but its hold slips as new generations take over.

And the role models for younger family members are often mothers, grandmothers and sisters.

The latest annual survey of family businesses by Honolulu-based Business Consulting Resources shows the tilt toward men over women in leadership is slipping away – but it will be at least another generation before it’s gone entirely.

Both women and men in the family businesses see the bias – especially among their parents and grandparents – but the women are more aware of it, according to the in-depth survey of 16 women and 10 men.

“They noted that leadership effectiveness was not a result of gender, but was specific to the individual,” says the study’s summary. “Most had worked with strong female leaders from previous generations.” Their female role models were most frequently mothers, grandmothers, sisters and other family members.

A good example is the Coon family that runs Trilogy Excursions on Maui with half a dozen high-end tour boats. Though brothers Jim and Randy Coon launched the company with their father in 1973, it was Randy’s wife, Pamela, who provided much of the glue that held operations together. Denver Coon, now general counsel for the company and one of five family members leading it, has strong memories of his mother handling many tasks.

“She was one of the hardest working people who ever lived, from waking up at 3:30 every morning to make 500 cinnamon rolls for the boat six days a week, to answering reservations lines in the office and at home,” says Coon. “What I learned from her was that work ethic – doing whatever was needed to make the business succeed. She was a teacher but took it upon herself to make the baking work. Wherever there was a need she was happy to fill it.”

This survey, called “Women Leaders on Family Enterprises – Shaping the future by shaping the next generation,” is the fourth annual study by BCR into leadership transitions and the roles and attitudes of the first, second and later generations of local family business owners and leaders. The latest survey focuses on Millennials and Gen Z, says Jean A. Santos, a founder and VP of BCR. 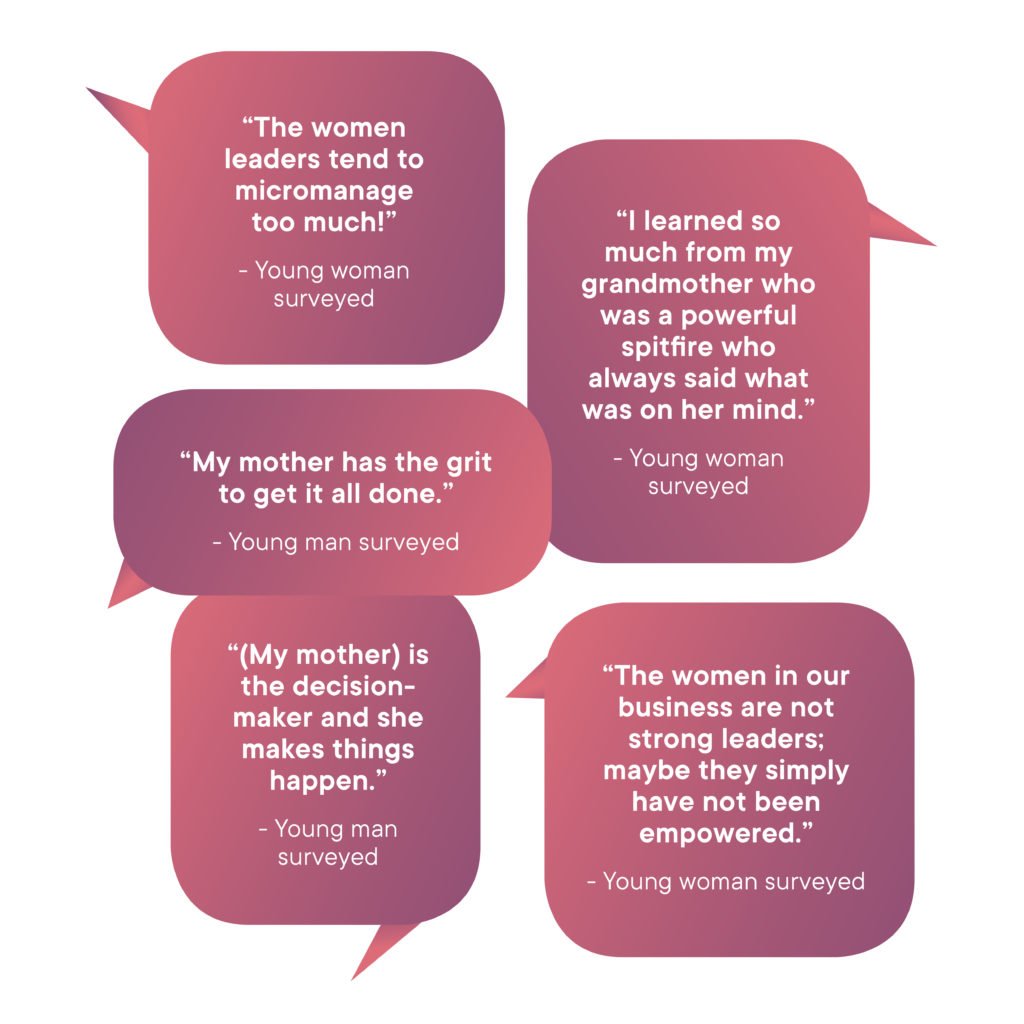 “In these two generations, probably in their early 20s and into their mid-40s, what I noticed was their amazing sense of confidence and their willingness to do things differently and take risks and embrace change. And I found that increasing with the youngest people we spoke with,” says Santos.

The survey also revealed the tremendous impact of the COVID-19 pandemic. “A lot of their opinions and values were already there, but what COVID did was shock the heck out of all of us, and made us realize the fragility of the ecosystems we work in on a daily basis,” Santos says.

“For them it made them say, ‘I’m ready. This is a wacky world.’ And there were many moms and dads who said, ‘You go ahead and take (over). I wouldn’t even know how to begin to deal with this.’ COVID pushed the accelerator on succession.”

Clarice Casamina agrees. She is the VP of sales and marketing and senior loan officer at House of Finance, a company launched 25 years ago by her parents. “COVID really sped up the succession in terms of what changes are we going to make in the next six months that are fundamental to doing business going forward. We wouldn’t have had this opportunity if we didn’t have a gun (COVID) to our head forcing all of us to come up with new innovations,” says Casamina.

Clarice Casamina says her father, Roland Casamina, remains very active in the company. She and her brother, who is COO, look to him for financial strategy rather than the nitty-gritty of daily issues. But, she says, they see their mother, Evelyn Casamina, as the ultimate word on decision-making. 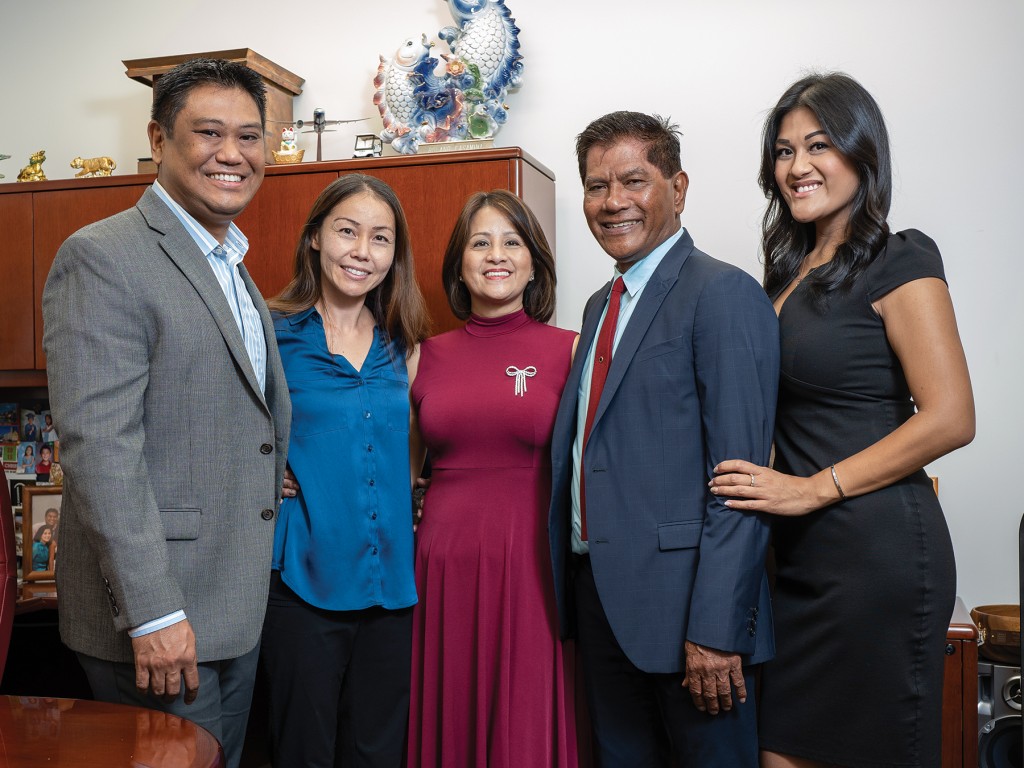 House of Finance was founded by Roland and Evelyn Casamina (center) in 1995. Matt Casamina and his wife, Yuka (both on the left), and Clarice Casamina (right) are the company’s second generation of leaders. | Photo: David Croxford

“She’s the one you have to get the real approval from,” says Clarice Casamina. “She is definitely the brains as far as business and strategic planning but prefers to be behind the scenes.”

Evelyn Casamina’s powerful work ethic, and her strength and determination, were passed on to her children.

“She is the voice in my head,” says Clarice Casamina. “So my dad is the questions – he’s always the guy who asks me the questions. He’s the voice I bounce the idea off of, and she’s the one who drives the thought: how to look at a good deal, how to make good decisions.”

Clarice Casamina says she is in awe of her mother’s accomplishments and how well she managed everything – home, family, business – while Clarice and her siblings grew up.

“Sometimes I have to hunker down and find the Evelyn in me,” she says.

“Some research suggests that women leaders are perceived as being more transformational than men leaders,” Browne writes in an email.

“For example, women leaders seem to emphasize teamwork and authentic communication as a key to success more so than men. What is ultimately positive about this is that, when women lead, they change the perceived conception about who can lead and what qualities are necessary to have in a leadership position. Women in these types of roles break down barriers and show everyone what women can – and should – achieve,” Browne writes.

In an ideal world, she says, “any business looks to competence so that their business is successful – however defined by the owner or owners. Logically, then, you look to a leader who can achieve that success. That is a reliance on logic. But, if we know anything about social and behavioral sciences, we know that not every decision – be it business or personal – is decided by reason and logic. We all have bias.” 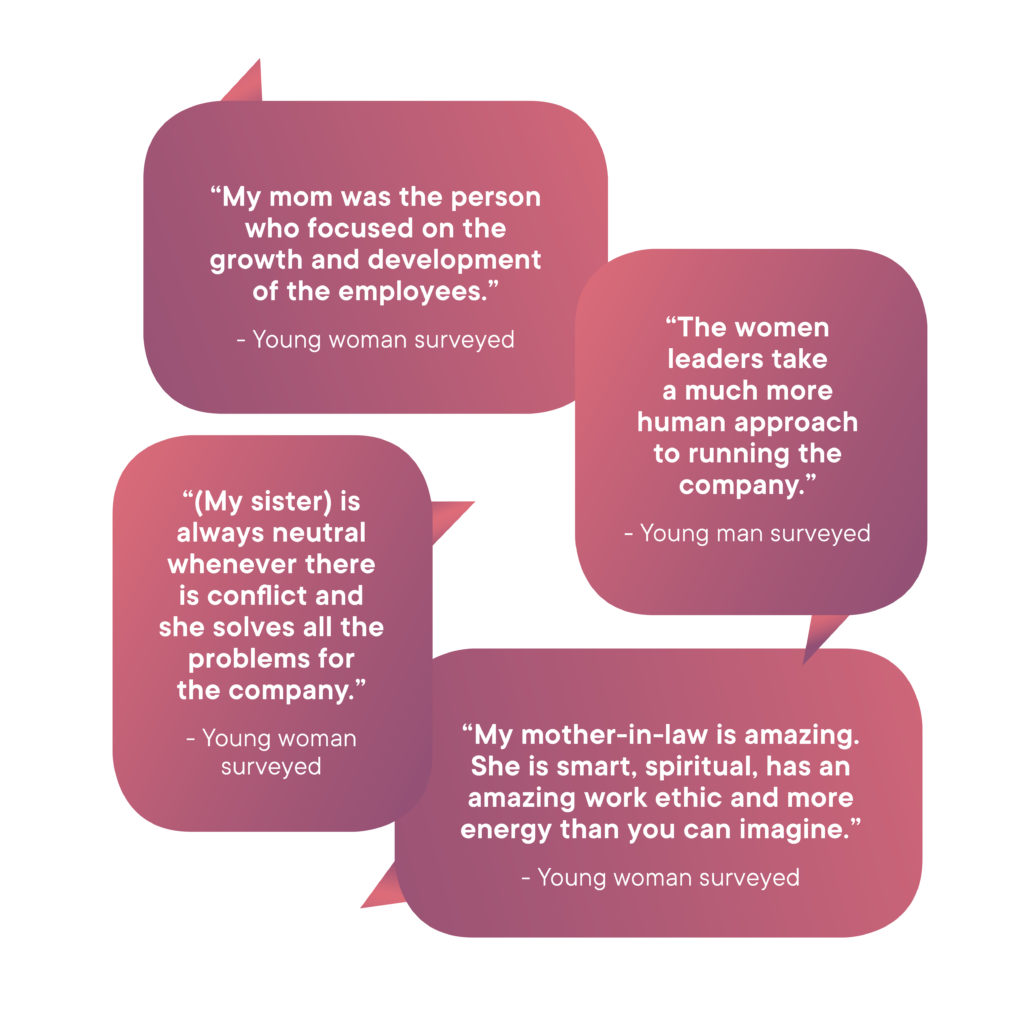 Browne says data she has reviewed shows the persistence of that bias. One consequence is a devaluation of work done by women, particularly if the work is often done by women, such as teaching, bookkeeping or sales.

“There is no question that women have made gains across the board – in economics and education, although less so in the political spheres. But the facts remain that the highest positions in the nation’s business community are still held by men, particularly by white men.”

She says that in the 1990s and early 2000s, the shrinking of the gender wage gap slowed down. And for years, the percentage of women in top management positions and on corporate boards slowly increased, but then stagnated over the past decade.

The Center for American Progress, a nonpartisan policy institute, reports that:

Those surveyed by BCR said they did not generalize about women leaders but evaluated each woman’s effectiveness in her role.

While the survey respondents indicated that gender bias was declining in their family businesses, two male and five female participants said it still impacted some decisions – especially in companies traditionally led by strong men, and especially if those men were still in control. The respondents from those companies said it would take several more generations to change that mindset.

Santos remembers one participant describing the family patriarch. “He’ll say something every so often and I’ll cringe and later I will pull him aside and say, ‘We can’t say this.’ ”

But Santos added that the same young leader indicated she wasn’t worried and knew what to do when she was running things, and that the company would be OK. Santos was impressed.

“Talk about self-control and self-awareness and a real willingness to balance the family and keep the family unit sane and not disrupt family relationships, and yet know my time is going to come and I know how to do this.” 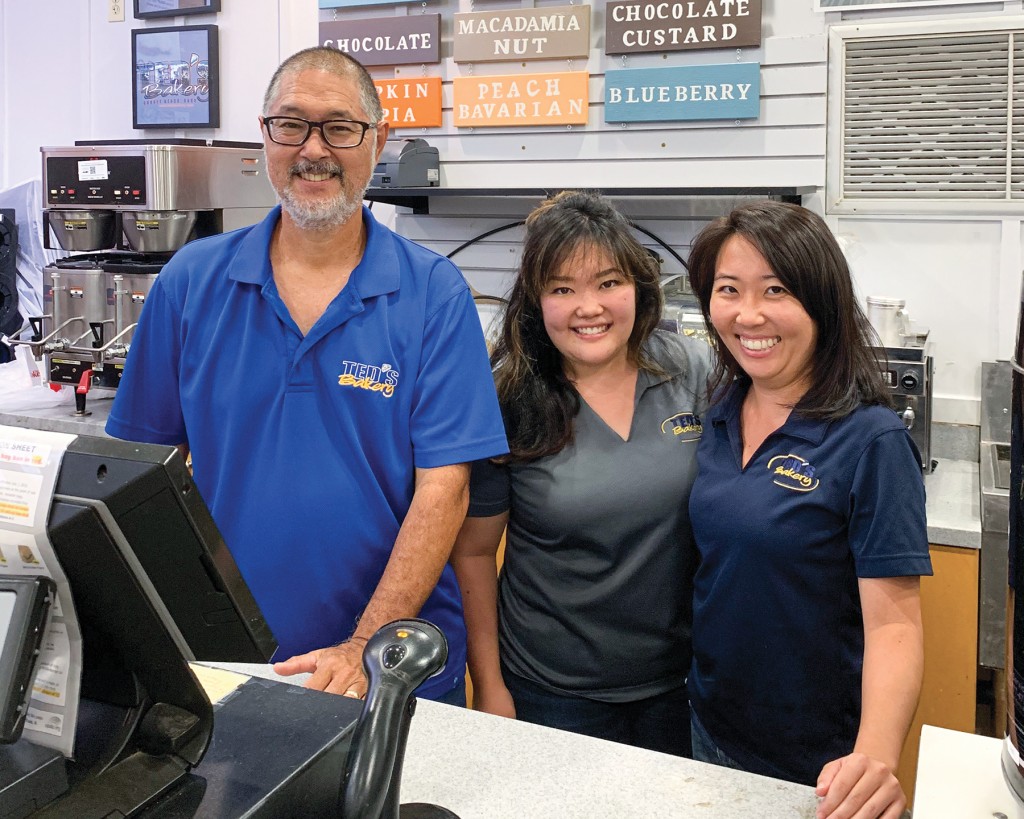 Ted’s Bakery on O‘ahu’s North Shore is now run by second and third generation family members. The bakery was founded by Ted Nakamura, pictured here in his parent’s Sunset Beach Store. Now Ted’s daughters Caylen (middle) and Torey Nakamura help operate the business. The daughters say gender is not an issue in the business. | Photo: Courtesy of Torey Nakamura

Ted’s Bakery on the North Shore began as a mom and pop store founded by Torey Nakamura’s grandparents in the 1950s. Gender bias has never been part of the company’s culture, but the importance of family has been. Maybe that’s because Ted Nakamura invited his two daughters into the business, and was happy that they wanted to be part of it.

“Gender doesn’t occur to us,” says Torey Nakamura, who handles the accounting. “As long as you’re willing, and you have the passion, and you work hard and have a good work ethic, then that’s the main thing.

“My sister and I make more decisions, but we do ask my dad for advice before we make decisions, or ask, ‘How do you feel about this?’ ”

BCR associate consultant Celine Casamina says that in the survey, it’s the young women in family businesses – not the young men – who most recognize that equality in the workplace is still a work in progress.

“It wasn’t as obvious to the men how gender bias expresses itself,” says Celine Casamina. “It can be so subtle and nuanced and so generationally ingrained. Women see it every day, but they overcome these obstacles. But it’s not as obvious to men what gender bias looks like.”

Santos agrees. “Women are very aware of the biases because we are on the receiving end of them. We don’t have the voice yet to point them out all the time. Women are still suppressing that voice, even in a family business setting. That’s part of the struggle here. Men are quicker to fall on, ‘It’s just that way,’ ‘The family is that way,’ ‘The industry is that way,’ whereas women don’t want to accept that. And yet we don’t have the voice to call it out.”

5 Steps to a Successful Job Interview