The 2023 Guide to Hawai’i’s Shipping, Air, and Transportation

Hawai‘i saw a drop in the overall importation of goods in 2022. The numbers typically fluctuate month by month over the year, and last year the state saw a substantial decrease from August 2021 to August 2022, from $184 million to $172.6 million, according to The Observatory of Economic Complexity (OEC), and Knoema’s World Atlas data. The drop was notably seen from June 2021 to September 2022.

However, “The overall domestic market volume remains relatively stable, as compared to the volatility we’ve seen in the international markets,” says George Pasha, IV, President and CEO of Pasha Hawaii. “The Hawai‘i market traditionally has some seasonality in the import volumes from the mainland, and these seasonal trends have held up year over year.”

The biggest news in Hawai‘i shipping continues to be investment in new equipment and eco-friendly technology, including progress on the Kapalama Container Terminal project. When completed, it will serve as the future home for Hawaii Stevedores, Inc. (HIS) and its parent company, Pasha.

In November, the Hawai‘i Department of Transportation was awarded $47.3 million that will go towards renewable energies for the terminal, in an effort to reduce the emissions and environmental impacts of port cargo handling operations by outfitting the terminal with resilient zero-emission and electric technology.

The funds will be matched by $92 million in private funds from HIS and The Pasha Group. The investment includes electrified ship-to-shore cranes, regenerative energy storage, microgrid battery storage systems, a solar power system for the terminal building, a micro wind turbine, and other state-of-the-art sustainable systems.

Pasha also recently launched the MV George III, Hawai‘i’s first containership to operate on natural gas. The company is also expecting delivery on the second of their two new LNG-powered containerships shortly. “The M/V Janet Marie will join the M/V George III in our weekly California-Hawai‘i Express service which will provide paired tonnage to strengthen our service profile with additional capacity for weekly volumes in the high-demand dry and refrigerated markets, and further support our environmental stewardship to the communities we serve,” says Pasha.

Pasha Hawaii is a third-generation family-owned company, dedicated to serving the 1.4 million people of Hawai‘i. The company’s strong sense of ‘ohana and personal pride from its 450-plus Hawaii team members serves as the foundation for Pasha Hawaii’s commitment to best-in-class service, on-time delivery, and environmental sustainability. For the Pasha family, investing in its employees and its Hawai‘i trade lane infrastructure remains a top priority. 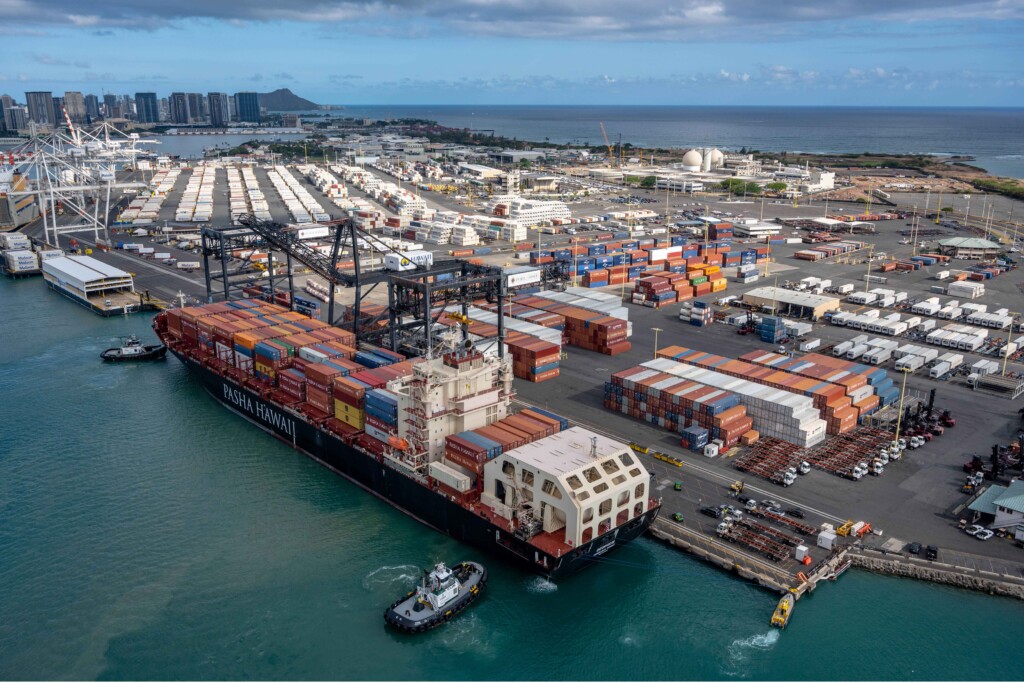 The new terminal will also help Young Brothers to optimize their operations by addressing their current space constraints at the Port of Honolulu. “The Kapalama Container Terminal project will open up additional terminal space at Pier 41, allowing us to partner with the State Department of Transportation Harbors Division to advance critical repairs at Piers 39 and 40 and enable Young Brothers to invest in a redesign of our terminal,” says Chris Martin, Director of Terminal Operations, Young Brothers, LLC.

Young Brothers has been shipping goods for more than 120 years, and maintains 12 weekly sailings to the ports of Nāwiliwili, Honolulu, Kaumalapau, Kaunakakai, Kahului, Kawaihae, and Hilo. “Young Brothers transports 100% of all ocean cargo originating and ending in Hawai‘i. This past year, we moved an average of 45,690 containers each month,” Martin says.

Although about 85 to 90% of the state’s food is imported, YB supports more than 85 Hawai‘i farmers and food producers, and the local agriculture supply chain, helping Hawai‘i become more resilient and self-sufficient.

“In 2022, we moved 90,701 tons in agricultural shipments. Also, our island agricultural product discount program helps Hawai‘i food producers connect their products with consumers in markets across Hawai‘i at a reduced cost, resulting in $2.2 million in savings for local farmers in 2021,” Martin says.

In 2022, YB also invested $9 million to add nearly 400 pieces of new equipment —including new containers, reefers and chassis — to its shoreside fleet, increasing access and availability to tools when and where they’re needed. “Looking forward, we will continue growing our fleet and plan to add a new larger flat deck barge that will enhance our ability and capacity to serve our neighbor island communities,” Martin says.

YB also has a new customer portal, that allows customers to manage their interisland shipping needs online by making reservations, getting tracking information for frequently-booked cargo, and by getting rate quotes.

With more than a century of service, Young Brothers has witnessed the extraordinary evolution of the state’s shipping and transportation industry.

“More than a responsibility, it’s been a privilege for us to evolve with the needs of the community,” says Jay Ana, president. “What we do impacts nearly every business, every person, every day—which is why we take our commitment to quality seriously.”

At every level of their more than 380-person organization, their ‘ohana shares a vision to bring island communities closer through reliable ocean-bound transportation. Part of how they’re continuously improving customer service as well as inter-island freight handling is through a significant investment—$100 million over five years—in equipment, facilities and technology. 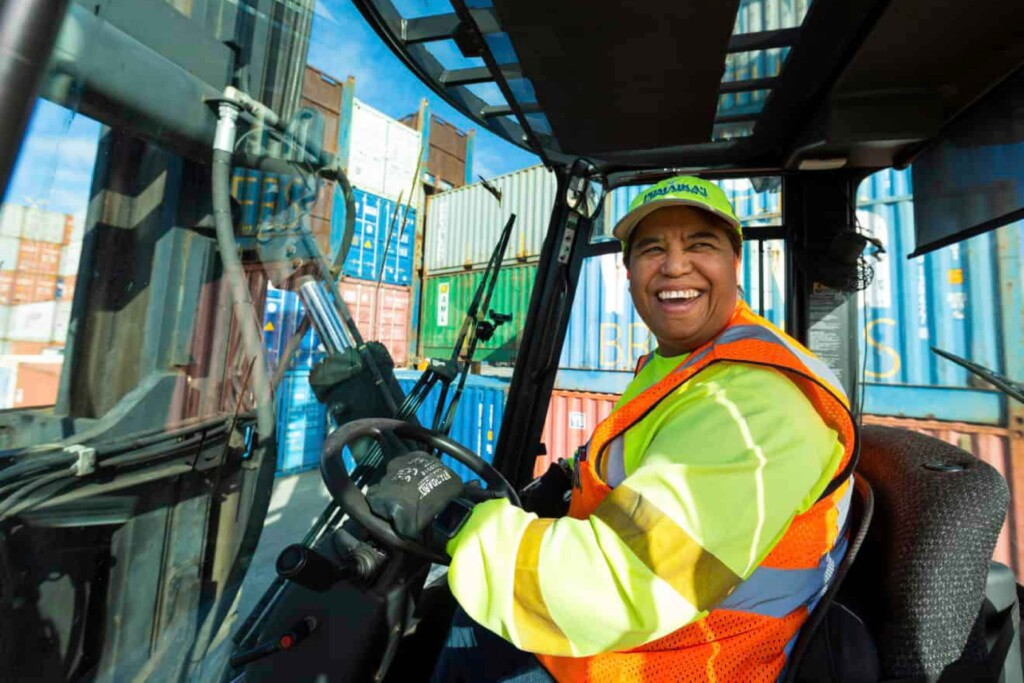 Most recently, they’ve concentrated their efforts on improving booking, gate experience, equipment availability and cargo tracking through the introduction of their online customer portal. With this tool, customers can now easily make reservations and track status for frequently booked cargo, and obtain rate quotes for shipments. Providing customers with greater convenience and better time management is just one of the ways Young Brothers is ensuring efficiency and resiliency.

As an essential member of the state’s transportation community, Young Brothers never loses sight of their kuleana to support Hawai‘i’s residents, farmers, small businesses and every industry making life in these islands possible. With more planned ahead, they’re eager to show the community what they’re doing to create a brighter, more sustainable future for all of Hawai‘i.

Matson reports that in the near term, the company expects to see continued economic growth in Hawai‘i, supported by a relatively tight labor market and increasing tourism traffic.

However, a combination of negative trends are creating uncertainty in future economic growth. Those factors include weakening U.S. and global economies, lower household discretionary income as a result of higher inflation, higher interest rates, and the end of the pandemic-era stimulus helping personal income, says Matt Cox, Matson’s Chairman and Chief Executive Officer.

Although Matson saw higher volume in shipping in Alaska, it saw lower volumes in Hawai‘i and Guam over the year. The company’s container volume in Hawai‘i in the third quarter of 2022 was 7.1% lower, primarily due to lower retail-related demand as compared to the pandemic spike in demand experienced during the same period a year ago, Cox says.

Matson also closed its seasonal China-California Express in September, about six weeks earlier than expected, after spot rates on the trade lane collapsed, Cox says. He also expects to see even more capacity reductions and schedule changes in the next two quarters to meet lower consumer demand. 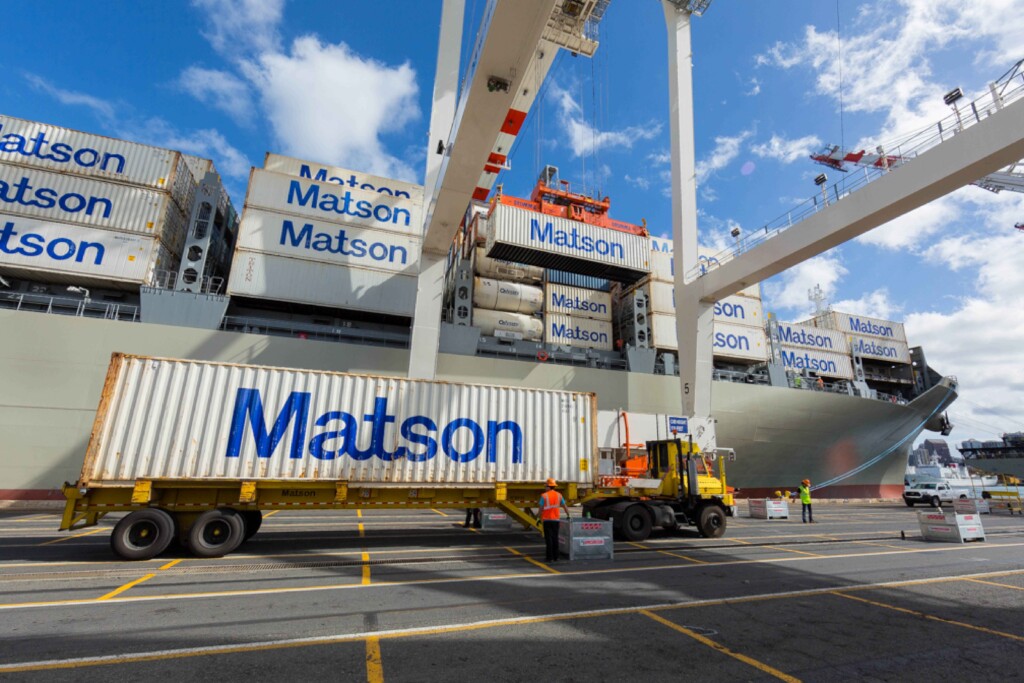 “Currently, we expect the next two quarters to be challenging in the Transpacific trade lane as retailers’ inventories adjust to current consumer demand levels and as ocean liners reduce vessel capacity to meet lower demand levels.”

Despite the outlook, Matson has signed $1 billion in vessel construction contracts for three new LNG-ready Aloha Class container ships. The company anticipates delivery of the first vessel to be in the fourth quarter of 2026 with subsequent deliveries in 2027. The 854-foot Aloha Class vessels are the largest containerships ever built in the U.S. and are designed to operate at speeds in excess of 23 knots, the company reports.

The new vessels will be built specifically for the China-Long Beach Express service, with state-of-the-art green technology features and a fuel-efficient hull design, and are expected to help Matson achieve its 2030 reduced greenhouse gas emissions goal.

A proud American shipping company with Hawaii roots dating back 140 years, Matson introduced containerization in the Pacific – an innovation that revolutionized the industry and became the worldwide standard – as well as the first automobile-carrying ship in the Pacific.

Matson was also among the first containership operators to recognize an obligation to protect the environment and set another industry standard decades ago with its Zero Solid Waste Discharge policy. The company has set goals of reducing fleet greenhouse gas emissions by 40% by 2030 and achieving net-zero total Scope 1 GHG emissions by 2050.

Matson provides industry-leading on-time delivery of essential goods to the economies of Hawaii, Alaska, Guam, Micronesia, and South Pacific islands and premium, expedited service from China to the U.S. West Coast. A key supply chain partner, its dependable U.S.-built, -owned and -operated ships and assets can be relied upon to continually replenish customer inventories.

In recent years, Matson invested approximately $1 billion in new ships and terminal improvements to support its Hawaii service. In November, it committed an additional $1 billion to building three more new ships that will serve Hawaii starting in 2026.

Matson contributes volunteer support and more than $3 million in cash and in-kind services to hundreds of non-profits annually. As part of its pandemic response in 2020, the company committed to providing $5 million in shipping services to support Hawaii’s foodbank networks through 2023.