HI529, Hawaii’s College Savings Program, now boasts assets of $67 million and some 4,260 participants – an average of about $16,000 per investor set aside for a keiki’s education. National analysts give Hawaii’s program good marks on the investment returns and the management team, and only ding the program on its fees, which are higher than many other state programs due in part to the smaller size of HI529.

Why, then, aren’t we hearing more about it? And why, when you ask your friends where they put their college savings funds, do they shake their heads and say no way to HI529?

Maybe it’s because there’s no incentive to keep those hard-earned dollars at home.

When section 529 of the IRS code first hit the streets almost 20 years ago, investors immediately saw its beauty. Unlike pre-paid tuition programs at state schools, the 529 programs allow savings to be used at any university around the country and offer a smart way to make sure Junior (and his parents) can afford college when the time comes. Best of all, investors aren’t tied to their home state’s program, or to a program where they think Junior might one day attend school. Today’s 529 investors do their homework and put their money where they think they’ll get the best bang for their dollar. For Hawaii investors, that often means sending those dollars to programs sponsored by other states.

Sandra Billington, a real estate manager with Alexander & Baldwin, was born and raised in Hawaii, but, when it came time to open a 529 program for her 4-year-old son, she and her husband sent their dollars to Virginia.

“I love the flexibility of the program,” she says. “It lets us put aside money for books, tuition, other costs.”

The Billingtons aren’t alone in choosing Virginia’s College America Fund, the largest 529 program in the nation, with almost $47 billion in investments.  The Virginia plan, along with plans in Nevada, Utah, Maryland and Michigan, routinely earn gold or silver ratings from the prestigious Morningstar investment rating service.

Deposits into 529 plans use after-income-tax dollars, but earnings and withdrawals are tax free, as long as they are used for higher-education costs. Other benefits of 529 programs include flexibility on how and when the funds can be used, and the ability to shift the beneficiary designation from one child to another, including grandchildren. However, there is a penalty if the money is withdrawn for reasons other than college education.

“How many more gifts does Junior need at birthdays and Christmas?” asks Derek DeLorenzo, senior VP for Ascensus, the Massachusetts-based asset management firm handling the HI529 program. “When grandparents, aunts and uncles put the money toward the kid’s 529, it’s the best gift they can give.”

Today, over $200 billion dollars are invested nationwide in almost 100 529 programs around the country, with numerous states offering multiple programs.

For Hawaii residents, here’s the kicker. The vast majority of state 529 programs offer one sweet benefit to local investors that Hawaii’s program doesn’t: state tax deductions. Scott Kami, administrator of the Hawaii Financial Administration Division, says that while tax incentives have been considered from time to time, the idea has never gotten traction in the state Legislature. “Our program stacks up well,” Kami said, “and tax incentives from other states offer no value to Hawaii investors.”  He also points out that the Hawaii program offers an affordable point of entry – a HI529 program can be opened with a mere $15 initial investment, much lower than many other programs. The state government collects no fees, commissions or anything else from the program.

Morningstar’s annual report on the nation’s 529 programs remains the industry gold standard, analyzing 85 plans and rating 64 of the largest ones. According to Morningstar senior analyst Kathryn Spica, “The investment options in the (HI529) plan have delivered risk-adjusted results that are near the middle of the pack.” While the HI529 plan isn’t included in the 64 ranked plans because of it’s small size, Spica says, the plan uses Ascensus as its program manager and Vanguard as its investment manager – much like other programs around the country – and Morningstar generally likes the “straightforward, broad investment lineup used by the Ascensus/Vanguard plans.”

Spica is less generous in her praise of the plan’s fees, however. “The Hawaii plan charges 0.75 percent for its investment options, which is on the high side compared to most direct-sold, index-based peers. The plan’s performance will always face a headwind from that higher fee,” she said. 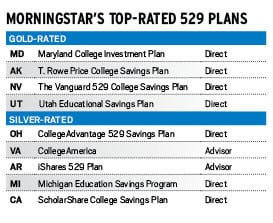 Like almost all investment programs, fees are part of the package.  On the low end of the spectrum, plans like those in Alaska and Arizona offer fees as low as 0.09 percent of assets each year. Hawaii comes in on the high side, at 0.75 percent, though other states are even higher.
Most of the plans are direct investment plans, meaning that you deposit the money directly rather than working with an investment advisor. Others, including Virginia’s very popular and successful CollegeAmerica plan, are advisor driven. Understand the difference and choose the one that works best for you.