Business leaders were given a list of four potential obstacles and asked: Which affected you the most?

FINE PRINT: Hiring concerns were cited more o en by leaders on Oahu (33 percent) than on the Neighbor Islands (23 percent)..

We repeated the question later in the survey with different obstacles.

Clearly, costs were the No. 1 obstacles. So each business leader was given five possible factors driving up their cost of doing business and asked to select up to two that are most responsible.

FINE PRINT: Rising payroll was more likely to be mentioned by leaders on Oahu (58 percent) than on the Neighbor Islands (38 percent).

The leaders were given a list of six potential areas of growth for their companies and asked to select the one or two best options.

FINE PRINT: Growth to the Mainland and the Asia/Pacific region was more popular among Oahu businesses.

Business leaders were asked a hypothetical question: If you were about to start a new business, would you based it in Hawaii or on the Mainland? Then they were asked to choose from three options as to why they picked Hawaii or the Mainland. 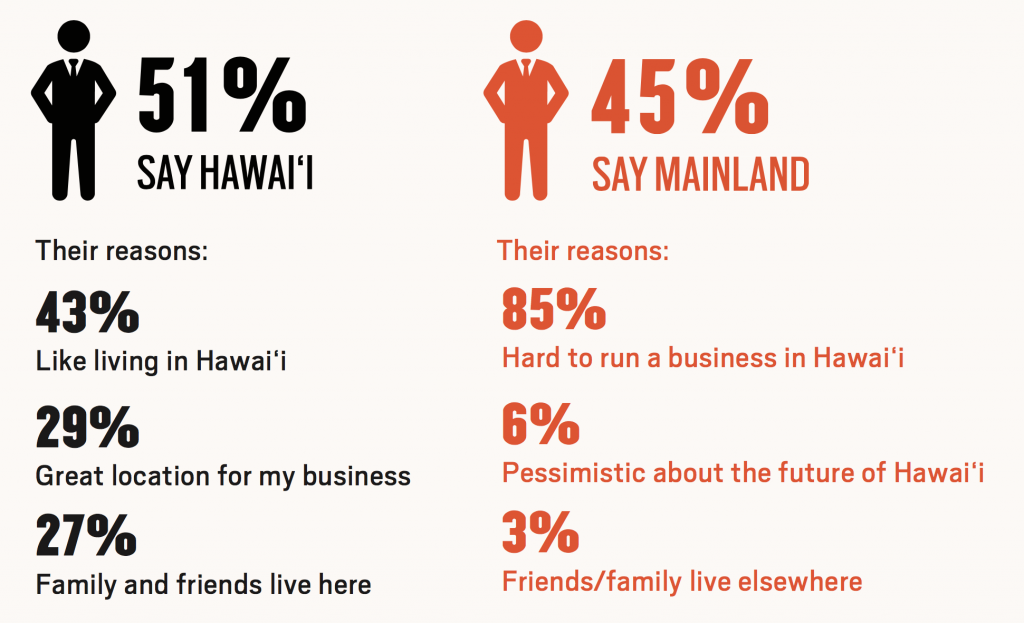 BOSS stands for the Business Outlook and Sentiment Survey and it’s conducted twice a year for Hawaii Business by QMark Research, a division of the Anthology Marketing Group. We ask about 400 business leaders, mostly company CEOs, more than two dozen questions. Taken together, their answers are a useful guide to Hawaii’s economy and business community now and in the near future.

WHAT’S NEW WITH THE BOSS?

In the past, Hawaii Business has published the results of each BOSS survey in a single issue. We will now publish parts of the BOSS in each issue of the magazine, beginning with results that are most time sensitive. Look for one or two pages of BOSS insights in every issue of Hawaii Business and regularly at hawaiibusiness.com.

Percentages don’t always add up to 100 because of rounding.