The Rise of Indigenous Theater in Hawai‘i

The Hawaiian theater program is revitalizing the Indigenous culture on stage and garnering national recognition for its performances.

Thanks to the growing number of Hawaiian speakers and those interested in learning the language, the Theatre Department at UH Mānoa has been putting on hana keaka (plays) completely in Hawaiian for sold-out audiences.

The department established its Hawaiian theater program in 2014 under the direction of Tammy Haili‘ōpua Baker.

“When I was a student at UH Mānoa, Kanaka Maoli artistic expression was not being represented in the Theatre Department,” Baker says. “That was one of the primary motivators to create work that would speak to our community, our history and also utilize our language and our culture as a foundation for communicating the experiences of the Indigenous people of this land.”

Across the globe, Indigenous languages are becoming extinct at an alarming rate. UNESCO, the United Nations Educational, Scientific and Cultural Organization, lists ‘Ōlelo Hawai‘i as among those critically endangered, though the language and the number of fluent Hawaiian speakers have enjoyed a resurgence in the past few decades.

“These speakers are making a concerted effort to create pathways for more Hawaiian language to propagate across the community,” says Baker.

Most of the hana keaka the Theatre Department stages are completely in ‘Ōlelo Hawai‘i, but some also incorporate Pidgin, though they make a point to not use English subtitles.

“For me, having it translated into English kind of defeats the purpose. If you make it easy for people to not have to do the work to understand it, people won’t want to learn the language,” says Ākea Kahikina, a graduate student who just earned his master’s degree in the program.

That said, he believes those in the audience who don’t speak Hawaiian can still appreciate the performances.

“You don’t need to necessarily know the language to get it, which is something kind of magical. Think about opera, right? A lot of people who go to the opera won’t understand the language being spoken, but they usually still get the gist of the story. It’s a success when your actors and staging can tell the story without having to translate it,” says Kahikina.

In addition to the language, many other key elements of Hawaiian culture are incorporated into hana keaka, such as mele (songs), oli (prayers) and hula.

“All the traditional performance methods are integrated into hana keaka, which propels and enhances the story,” says Kahikina. “It’s also our way of trying to decolonize the theater space.”

Ancient Hawaiians never relied on written records. Instead they used oral and visual storytelling, which is in part why rejuvenating hana keaka honors Hawaiian tradition and history.

“Mele, oli and even hula: All of those are history books … that have been passed on down the line, and a platform like hana keaka is our history books being brought to life,” says Keola Simpson, who earned his master in fine arts degree at UH Mānoa.

The main difference between traditional and contemporary Hawaiian theater is technology, Baker says.

“Moving into contemporary times, we have the opportunity to stage things with costumes and lights and all of the magic of modern theater. So that’s what really makes contemporary hana keaka an evolved version of traditional Hawaiian theater,” she says. 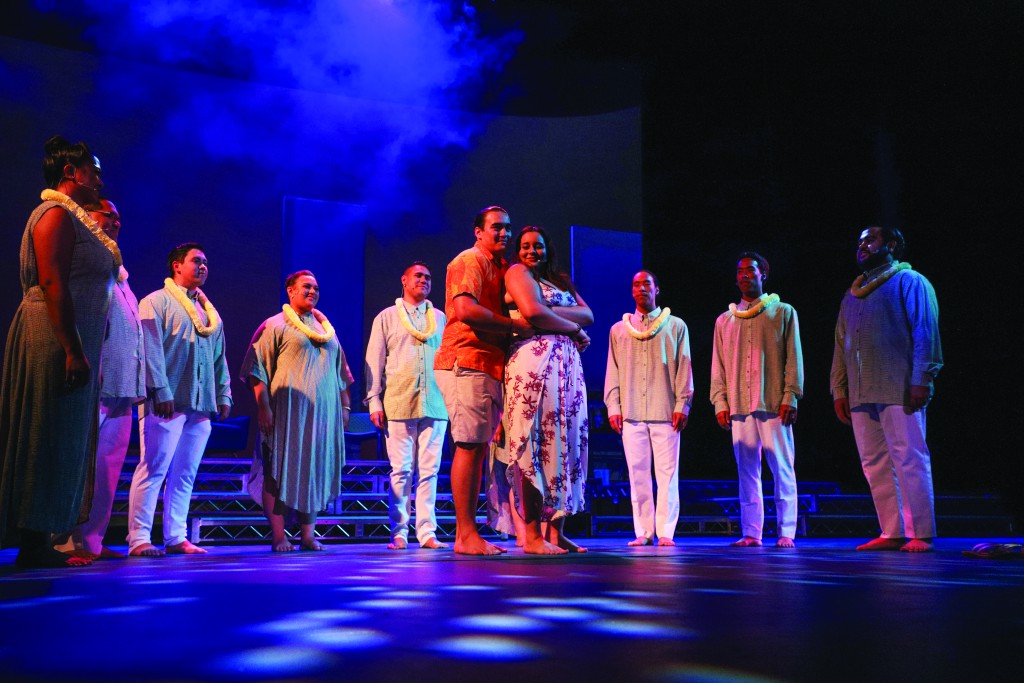 Despite only being in existence for eight years, the Hawaiian theater program has won numerous regional and national awards. Baker received the Medallion of Excellence from the Kennedy Center in Washington, D.C., and the play “He Leo Aloha,” written by master’s of fine arts student Kaipulaumakaniolono Baker, received eight national and regional awards for the 2021-22 season.

The program’s latest production, “Hoʻoilina,” which means legacy and inheritance, is a comedy written and directed by Kahikina. The dialogue is a mixture of Hawaiian, Pidgin and English.

“It’s about a Hawaiian family. They are ready to read the will of their late matriarch who lived in Kāhala and had a lot of money. And right before they read her will, in comes this quirky Texas girl. She tells them, ‘I’m here to see the late matriarch, I got invited’ and then all these family secrets come out as they try to figure out who this outsider is. It’s just a wacky, wacky story,” says Kahikina.

“I think it’s the best production so far, which means we’re evolving and continuing to get better. The talent level of the performers in that group is so impressive. We’ve gotten really lucky with some actors who have chosen to come home to pursue their master’s degrees,” says Simpson.