The Present and Future of Coworking

Local coworking spaces enjoy increased demand from digital nomads who drop in for a day or longer, from local companies giving up their own offices and from at-home workers who occasionally need more space.

“Before the pandemic, people weren’t able to work from home because their leadership thought it was impossible or insufficient, but those reasons have been proven wrong,” says Rechung Fujihira, co-founder and CEO of coworking space BoxJelly. “The game has shifted. … Remote work has decoupled office space from the business itself.”

This shift in work patterns has long-term implications for residential and commercial real estate and has impacted a niche industry: coworking.

Hub Coworking Hawaiʻi is the state’s largest coworking facility, a 17,770-square-foot space at 1050 Queen St. Co-founders George Yarbrough and Nam Vu planned to open satellite locations on Hawai‘i Island and Maui, but those plans were interrupted by the pandemic, and the team has been flexible ever since.

In March 2020, Yarbrough says, his team anticipated drastic drops in event revenue and memberships, so the Hub offered a 15% discount for six months for its 220 members (representing 110 companies). “We were very hopeful that by September the pandemic would be done,” he says. “Obviously, that wasn’t the case.”

The Hub benefitted from the Paycheck Protection Program, receiving a low-interest loan from the U.S. Small Business Administration. Toward the end of 2020, Hub membership rebounded with “an uptick in people leaving the continental U.S. and coming to Hawai‘i as remote workers and digital nomads,” Yarbrough says. “People wanted to get out of high-density urban centers such as New York, Seattle, Austin, Miami.” 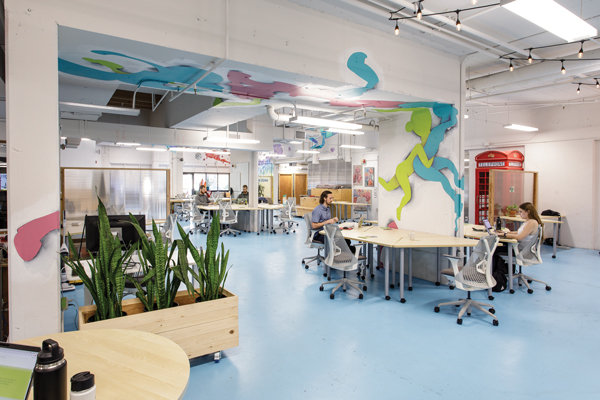 Yarbrough also noticed some local businesses reconsidering their downtown leases and seeking flexible work arrangements for their teams. “We changed our model a bit to provide on-demand office spaces,” he says. “You can rent an office for the day if you want.”

That’s how the Hub weathered the worst of the pandemic while adapting to increased demand from:

To adjust to these and other trends, managers of coworking spaces are changing their physical designs to cater to clients while maintaining social distancing and sanitation requirements.

“People want a hybrid of personal niches and public space,” says Sandi Kanemori, program manager for the Entrepreneurs Sandbox in Kaka‘ako. “It’s been a challenge to figure out a design layout to meet that desire.”

The Sandbox is a project of the Hawaii Technology Development Corp. The 13,500-square-foot facility includes spaces for events, coworking, meetings and small offices. Its coworking space is managed by BoxJelly, which opened Hawai‘i’s first coworking location in 2011 and now operates a second site in Ward Village.

Kanemori says that before COVID-19, the trend toward open floor plans in residences and office spaces was slowing. The pandemic reversed that trend entirely, she says. “COVID made people hesitant about large open spaces,” she says. In response, the Sandbox spaced out the tables in its cavernous main room.

“Community” tables are gone, and Kanemori says users seem to prefer the new individual seating because it helps them to balance independence with a feeling of community.

There are no walls within the main workspace, but moveable plants serve as separators while preserving the openness. “It’s a work in progress,” Kanemori says. 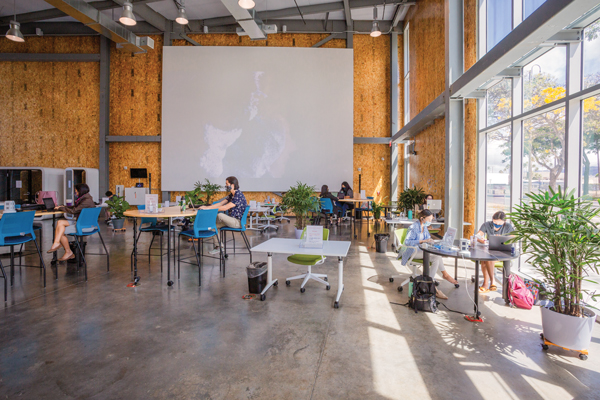 The Sandbox’s long-term tenants include teams from such local companies as Central Pacific Bank, Pacxa and Servco Labs and from startups like Shifted Energy, which develops grid-connected control units for electric water heaters. MajiConnection, another office tenant, helps local startups enter the Japanese market and Japanese startups enter the U.S., via Hawai‘i.

Kanemori says office tenants have come in less often during the pandemic, which threatens a Sandbox selling point: that startups can rub shoulders with established companies.

The physical design of the Sandbox is intended to foster collaboration: large open spaces, floor-to-ceiling glass windows, rearrangeable furniture and repurposable rooms. This last feature was on display when the Sandbox celebrated the May 2021 opening of Id8 Studios, a soundstage with full lighting rig and green screen.

The Architecture of Relationships

Architecture helps foster collaboration, and the pandemic caused a reconsideration of workspace design, at the office and at home.

Some new housing developments feature home offices and on-site coworking spaces. In Ward Village, an entire community is being built that caters to remote-working professionals.

“Architecture really sets up the possibility for relationships. You can either make buildings be isolated and separating, or you can make it so that people can actually come into contact and make that contact in a comfortable way,” says Jeanne Gang, the architect of Kō‘ula, a tower in Ward Village scheduled for completion in fall of 2022.

Gang sought to design Kō‘ula as a “gradient of social spaces, from public spaces outside (a public park), to semi-public spaces like the lobby and terraces, to amenity spaces where people can mix and socialize.” This mix of spaces is common in Ward Village, which bills itself as a place “to live, work and play.”

“It’s an interesting inflection point for us,” says Doug Johnstone, Hawai‘i region president for developer The Howard Hughes Corp. As Honolulu emerges from pandemic restrictions, he says, construction is finishing on two buildings, ‘A‘ali‘i and Kōula, which will nearly double the population of Kaka‘ako’s Ward Village.

Residences in Ward Village are built with multifunctional shared spaces, which can be purposed for work, he says. For example, Ae‘o Tower above Whole Foods, has a media room on its terrace level. The small theater can be reserved for everything from a business presentation to a children’s movie night.

Ke Kilohana, a mixed-use condominium on Ward Avenue, has a coworking space on its eighth floor that includes multiple tables and a whiteboard. When Hawaii Business Magazine visited at lunchtime, a resident was tapping away at her laptop. With her earphones in, she barely noticed the interruption.

Future developments will feature in-unit spaces designed for remote work, says Bonnie Wedemeyer, executive VP of sales and strategy. She says that in around 75% of the units at Park Ward Village, a storage room can be converted into a dedicated work-from-home space with a built-in desk. The space is often next to the kitchen, she says, and when the workday is done, it can be closed like a closet.

Johnstone says remote work presents an opportunity for people who grew up in Hawai‘i but have careers elsewhere. They can return home and be closer to family while working remotely. Dedicated in-home workspaces are especially convenient for professionals who take late night or early morning virtual meetings with people on the U.S. East Coast or in Asia, says Johnstone.

Not all entrepreneurs, small businesses and nonprofits can afford a home office, and some meetings must be taken in person, so coworking spaces are catering to those needs. 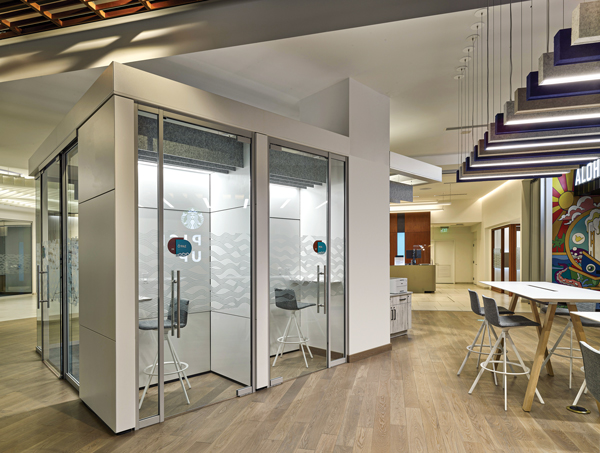 Tidepools is aimed at business and nonprofit professionals who can’t host meetings at their homes or offices, says Susan Utsugi, senior VP of business banking at CPB. CPB clients get priority, but the space is open to the public.

“Some people have vacated their office because they’re working at home,” says Utsugi, “yet you still need a space where you want to work with clients and have meetings.”

Tidepools was planned before the pandemic, but CPB says it pivoted to incorporate social distancing and sanitation best practices into its design. That includes a nano-antimicrobial coating to all high-touch surfaces, sanitation systems and no-touch fever screening, similar to the infrared cameras at Daniel K. Inouye International Airport that screen people as they enter the terminals.

Kawamura says Tidepools bookings have steadily increased since its opening in January 2021. Some are repeat clients, while others have used the space only once. The downtown location and free validated parking are selling points, he says. Tidepools is unique among the coworking spaces profiled in this article: It does not o€ er space for long-term lease.

Some coworking spaces differentiate themselves in other ways: For instance, one says it seeks to cultivate aloha.

“Aloha is not just produced out of thin air. It has to be nurtured. It has to be cultivated,” says Mahina Paishon-Duarte, co-founder of Waiwai Collective.

Waiwai Collective has two coworking locations. Its newest site is on Nu‘uanu Avenue in Chinatown and its original is a 5,000-square-foot space on the ground floor of the old Varsity Building in Mo‘ili‘ili. Paishon-Duarte says she and her co-founders, Keoni Lee and Jamie Makasobe, designed the original as a gathering space centered on strengthening relationships, what she terms “urban ‘aina.”

Waiwai hosted around 300 events a year before the pandemic. But it’s lost 80% of its revenue since April 2020 and had to lay off nearly two-thirds of its staff , she says.

However, Waiwai learned how to produce virtual and hybrid events, and to facilitate virtual coworking spaces, where people can interact as they would in person but from the safety and convenience of their homes, Paishon-Duarte says.

“The pivot was really healthy for us because it’s helped us to see that we can do so much more, even though we are a brick-and-mortar, physical space. Now I can connect to someone in Japan or in Europe or somewhere on the continent, and so it really opens up opportunity.” 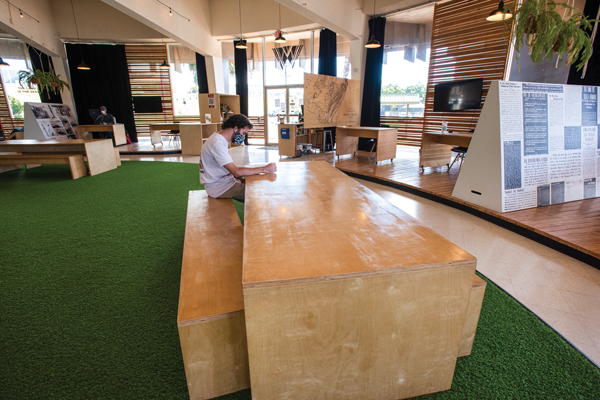 Paishon-Duarte says part of Waiwai’s mission is to address the socioeconomic dysfunction that drives residents to leave Hawai‘i.

Before the pandemic, she says, “We as local residents, as part of the hardworking working class, were being out-priced from the quality of life that we all desire and deserve. COVID-19 has put a spotlight on all of these social, infrastructural pain points that we were seeing. … We finally have this common enemy.”

Paishon-Duarte says that “as we reopen our doors to tourism again … we need to think about how we treat all our spaces.”

“We have to think critically as local residents. How do we treat and cherish the spaces that we have – both in our built environments and in our natural environments?” she asks. “We have to care for them. If not, they will be degraded. They will be trampled over.”