The smiling folks who work the counter at Don Dymond’s stores in Kailua tend to stay around a while. Dymond, who runs Kalapawai Market, Kalapawai Café and several other small businesses, rarely lays people off and thus has little concern about racking up big unemployment claims.

That is about to change for Dymond and countless other businesses across the state. They are about to see an unprecedented jump in their unemployment insurance charges – five times what they now pay or more – no matter what the size of their business or their experience in keeping people on the job.

“Oh, my gosh, that’s not what I had budgeted,” says Dymond.

The coming surge in unemployment insurance premiums is the result of a perfect storm of conditions, some created by the Legislature and others the inevitable result of rising unemployment in Hawaii. From historic lows of under 3 percent a few years ago, rates are projected to hit as high as 9 percent by the end of this year.

“It will be a real bitter pill to swallow. You’ll be paying five times or six times more – that’s a massive tax increase.”

“For a lot of employers, it’s going to be a sucker punch,” says Ben Godsey, president of finance and operations at the employee services firm ProService Hawaii. Godsey has been following the unemployment insurance fund carefully. His firm handles more than 9,000 employees and he knows the companies he services will be upset to hear that their unemployment insurance costs are about to soar.

Godsey foresees a “massive spike” in unemployment premiums when the next bills (or rate notification letters) are sent in March. The state, clearly, would like to avoid that scenario. “We hope we won’t have to do that (raise insurance taxes),” says Ryan Markham, of the state Labor Department.

But the choice may be out of anyone’s hands, not just because overall unemployment is up, draining the trust fund, but also because the state will end a tax holiday imposed by the Legislature in 2008 when the trust fund was fat. That tax holiday, known as Act 110, dramatically lowered unemployment insurance charges by reducing the maximum wage base that is taxed from $35,000 to $13,000 and by cutting the average rate against that base from around 3 percent to around 1.5 percent.

Act 110 also extended the length of time an unemployed person could claim benefits.

All this made sense at the time. The unemployment insurance trust fund had about a half-billion dollars and the economy was humming. It made economic and political sense to give employers a break.

But the law sensibly included a “sunset” provision, which would drop the advantages of Act 110 and return to previous rates or even higher rates if the trust fund dropped below what are called “adequate minimum reserves.” That moment, by all accounts, is due by the end of this calendar year. 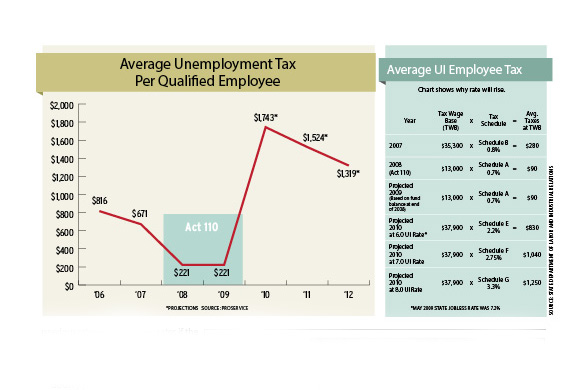 Godsey projects a reserve of $50 million to $70 million or less by the end of the year. The state is more optimistic, but, in either case, the reserve almost certainly will have drained enough to trigger the end of the tax holiday.

“Coming off the artificially low charges of Act 110, the whiplash is going to be more powerful,” Godsey says.

Jonathan Hall, pricing manager with ProService, says employers will basically face a triple whammy: The taxable wage base will increase substantially; the percentage basis on which taxes are figured could easily double; and the overall schedule of taxes will jump in proportion to the shrinking size of the trust fund.

“It will be a real bitter pill to swallow,” Hall said.  “You’ll be paying five times or six times more – that’s a massive tax increase.”

The precise rates paid by a company will depend on its salary base, the size of its operation and its “experience,” or how many of its former employees have filed for unemployment benefits.

Markham of the state Labor Department makes two points: First, and most important, is that the decline in the unemployment fund should not threaten benefits for folks out of work. The federal government has insurance plans to guarantee that benefits will continue to flow.

Second, while it is true that the tax schedule might shift, he says the state will do what it can to ease the burden for employers. Markham notes the irony that rising unemployment insurance rates could cause some employers to lay off more workers, contributing to a vicious circle.

“We’re walking on the edge of a cliff on unsteady ground.”

But hope is a thin thread. Godsey is convinced a massive increase in insurance charges is on the horizon. “We’re walking on the edge of a cliff on unsteady ground,” he says.

Despite his concerns, Dymond is relatively optimistic. His experience (he currently has just one former employee on unemployment benefits) is low and his cadre of part-time and seasonal workers means few hit the maximum taxable salary limit.

Nonetheless, his bill of many thousands a year for unemployment insurance  (for all his businesses) is likely to go up by four to five times.

What to do? For Dymond, and business owners in his position, the best course is to plan now for much higher costs. The days of exceptionally low unemployment insurance rates are over.