Hawai‘i’s restaurant industry enjoyed a robust 21% overall increase in daily customers during the first quarter of 2022 compared with the same period last year. However, that was followed by a second quarter in which the increase was a modest 3%.

The growth in customers so far this year combined with higher costs for restaurants and higher prices for customers made for a turbulent six months, according to the Food Gurus Hawaii Restaurant Index.

The index tracks over 4 million transactions monthly at more than a hundred restaurant locations statewide.

To meet increasing costs, restaurants tracked by the index raised menu prices as much as 24% during this year’s first quarter. However, menu prices were essentially flat in the second quarter, with an average 1% increase on top of the first-quarter increases.

One consequence was that more customers than before chose fast-food restaurants. “This category took away from higher-priced restaurants,” says Doug Harris, founder of Food Gurus Hawaii. “As discretionary money became tighter, customers ‘traded down’ to fast food.” 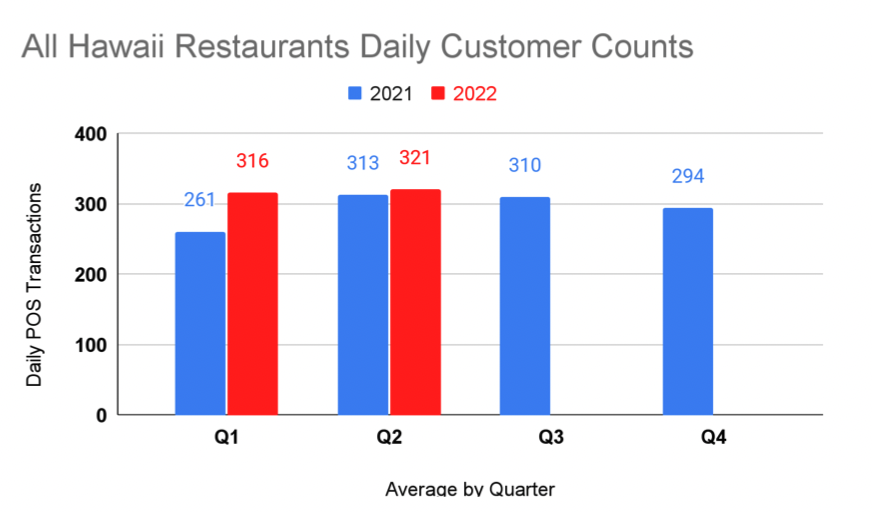 The changes in customer counts and menu prices varied by location and type of restaurant tracked by the index.

Harris says the quick service restaurants, or QSRs, have wrestled with their customers’ concerns about inflation. “In the last six months of 2021, QSR operators did their best to hold down prices and add value by discounting to attract customers,” he says.

“Those efforts kept transactions steady in the third and fourth quarters of 2021, but most QSR operators were forced into double-digit menu price increases in the first quarter – up to 24% – to make up for escalating food and labor costs.”

Restaurants are faced with no easy answers to difficult challenges, Harris says.

“With food and labor shortages, restaurants may need to focus on signature dishes and enhanced customer service because today’s consumer is OK to pay more for what they want, but have higher expectations.”