Over 2,500 limbs are lost every day in the U.S., more than 60% of them by diabetes patients. In fact, one-fourth of all people diagnosed with diabetes will eventually lose part of their lower extremities, says Dr. Nazila Azordegan, clinical pathologist at Henry Ford Health in Michigan.

People of all ages are affected, but the elderly suffer the most. “One in four people over the age of 65 will develop type 2 diabetes over their life-time,” says Azordegan.

In Hawai‘i, Native Hawaiians and Pacific Islanders are particularly hard hit. Research from UH’s John A. Burns School of Medicine (tinyurl.com/DiabetesHI) shows that 22.4% of Native Hawaiians in Hawai‘i are diagnosed with diabetes mellitus and an additional 15% have been diagnosed as prediabetic.

Diabetes is a dangerous disease that affects the vascular system and leads to high risks for developing cardiovascular disease, diseases of the retina and kidney, neuropathy, and lower limb amputation.

A common outcome is diabetic foot syndrome, which often leads to amputation. Most cases result from simple abrasions of the foot that are left untreated, due to neuropathy and vascular disease.

When preventive measures fail and the disease progresses, patients and their doctors must often resort to a full foot amputation, and half of amputation patients die within five years. Dr. David Lee, a podiatrist based in Lahaina, says, “84% of lower extremity amputations are preceded by ulcerations.”

But there is hope. “Annual diabetic foot exams can prevent 50% of amputations,” he says, adding, “With appropriate education, treatment and follow-up observations, most patients would be healed before their foot ulcers become high-risk for amputation.”

According to the American Diabetes Association, diabetes costs the U.S. health care system $327 billion a year. 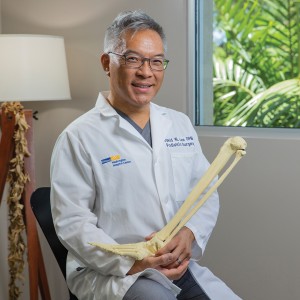 “The cost of diabetes treatment and its comorbidities exceeds that of cancer,” Lee says. Plus, the chance of dying within five years after the first amputation is 50%. An above-knee amputation brings the same mortality rate within three years.

“Once a patient undergoes a standard below-knee amputation, the metabolic stress on the patient’s body permanently increases by 28%,” says Dr. Christian Kikuchi, an orthopedic surgeon based in Honolulu.

“As sophisticated as prosthetic technology has come, there is a psychological impact of amputation. Apart from the psychological problem, going straight to amputation is not an ideal medical treatment option,” explains Dr. Kikuchi.

Amputation results in permanent physical changes in terms of metabolic and physical demands for the patient. “It’s very well known within orthopedics that with amputations the patient’s metabolic demand increases in direct relation to the level of amputation per-formed,” Kikuchi says.

An alternative to amputation is limb salvage: a surgical technique that results in an overall reduction of major limb amputation. Limb salvage is described as an aggressive limb preservation management for patients with diabetic foot ulcers. “The goal of limb salvage is to restore enough foot to allow the patient to ambulate safely,” Lee says.

Lee describes the criteria for a diabetic foot syndrome patient to be a surgical candidate for limb salvage: “A foot can be saved if there is proper circulation to support healing, adequate remaining tissue to cover the bone, and enough bone to walk on after the surgery.” If these criteria are not met, a full below-knee amputation would be required.

Limb salvage is not widely practiced or accepted due to the cost in time and money, the procedure’s complexity and the lengthy recovery time.

“The procedures themselves are technically complex to execute, so you need a surgeon who has a high level of surgical expertise and training to be able to execute these procedures safely,” Kikuchi says. “On the socioeconomic side, these surgeries are quite involved in terms of both financial and time cost.”

Moreover, many patients die, and successful preservation of the foot is difficult. Typical short-term complications of limb salvage include infections and fractures which may lead to a higher-level amputation on the foot or leg.

“There is a 25-55% morbidity in this patient population. They have multiple medical problems, which creates a very harsh environment for the leg and the body’s ability to heal. This is directly linked to the patient’s ability to heal from these surgeries,” Kikuchi explains.

“The goal of limb salvage is to restore enough foot to allow the patient to ambulate safely.”

Diabetic foot ulcers are typically hidden beneath calluses which are often surrounded by dead tissue. Debridements are performed to remove this dead skin to promote proper healing, causing a “bloody mess in the clinical exam room” says Dr. Lee.

“It becomes very difficult to get them to trust me and the process,” says Lee, who performs limb salvage procedures. Obtaining trust in the patient-provider relationship is the most challenging obstacle to overcome, he says, and this drawback discourages many surgeons from performing limb salvage.

“Food Can Hurt You”

After diabetic limb salvage, the healing process can take a few months to years and is largely dependent on patients and their habits. Interestingly, patients who undergo diabetic limb salvage do not experience phantom-limb syndrome. This is because they already lost sensation in the foot prior to the procedure due to their diabetes.

“My patients who occasionally feel a phantom limb describe it more as a novelty rather than a pain,” says Lee.

Azordegan, Kikuchi and Lee all emphasize patient education and preventive actions like a healthy diet to prevent the onset and progression of severe diabetes.

“It is hard to grasp the concept that food can hurt you,” Lee says. In his 10 years of practice in Hawai‘i, he has noticed that patients who are well educated on diabetes are more likely to be diligent in keeping healthy habits and diets. That is the most successful way to prevent diabetes, amputation and limb salvage.