The fifth annual East Meets West event, organized by Blue Startups, is a two-day conference where entrepreneurs and investors convene – indoors and outdoors

Chenoa Farnsworth attends 10 to 15 business and tech conferences across the U.S. and Asia each year. She knows the good from the bad. That’s why in 2014, when the managing partner of Blue Startups joined with co-founders Maya Rogers and Henk Rogers to launch their own event, she had a few ideas on how things should go: Attendees should be able to interact with speakers, sessions should be short but impactful and you shouldn’t spend the entire conference in a ballroom.

Fast-forward five years, and East Meets West is Hawaii’s premier startup event. (Disclosure: Hawaii Business magazine is the media sponsor.) “Even though it’s a Blue Startups event, it’s kind of taken on a life of its own,” says Farnsworth. “I just came back from Asia and everyone I talked to has heard of East Meets West, even if they haven’t heard of Blue Startups … which is great for Hawaii. It’s putting us on the map in a way that we haven’t been before.”

The annual event is geared toward entrepreneurs and investors who do business in the U.S. and Asia. The Blue Startups team brainstorms themes based on cross-market trends and this year’s topics are:

“The agenda captivates a lot of people from a variety of industries and positions,” says Justen Burdette, the CEO of Mobi. Burdette, who is based in San Francisco but travels to Hawaii one or two times a month, attended East Meets West for the first time last year.

Burdette says the event is relevant whether your business is new or established. “Mobi launched in 2005, so we’re by no means a startup, but in the last year we’re trying to reinvent the company,” he says, adding that he’s trying to infuse the startup innovation mentality within Mobi’s company culture. The local wireless provider is such a strong supporter of Hawaii’s startup community, says Burdette, that Mobi is a platinum sponsor for the 2019 conference.

About half of the audience flies in for East Meets West, says Farnsworth. Last year, 400 people attended and this year, she expects 500. “It’s a great place to meet new partners,” says Farnsworth. “I think of it this way: We bring the world to you, instead of you going out there.” 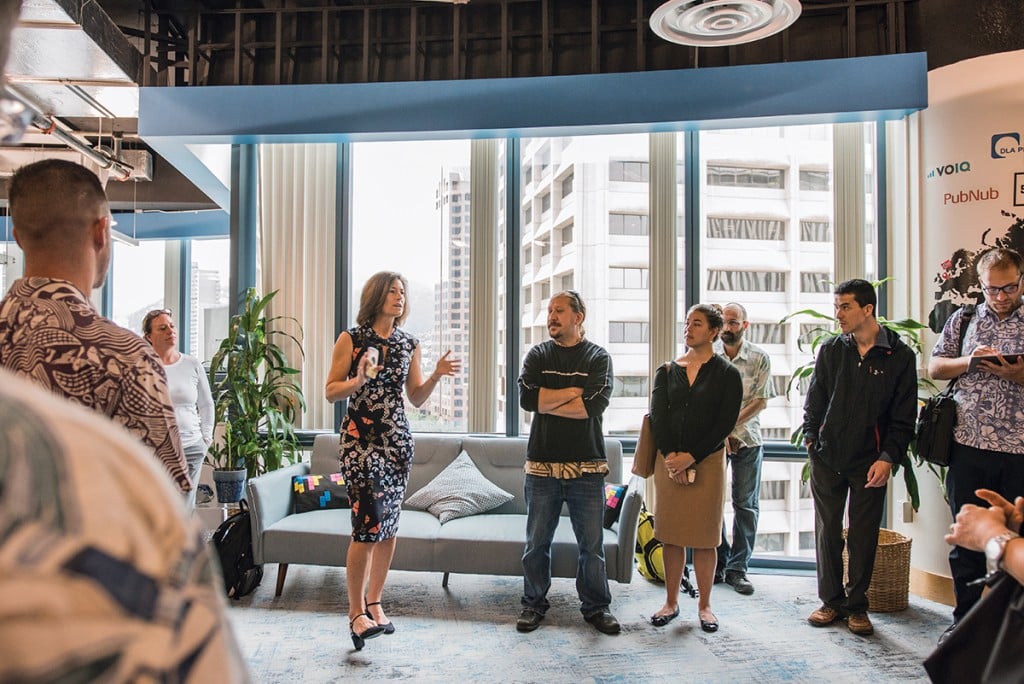 About 30 people present at East Meets West, including a mix of standout local entrepreneurs, high-caliber investors and tech titans. This year’s speakers include Rotten Tomatoes co-founder Patrick Lee; Hans Tung, a managing partner at Silicon Valley-based GGV Capital (he has been ranked by Forbes Midas List as one of the world’s top venture capitalists); and Meli James, a co-founder of Mana Up, a Hawaii-based initiative designed to build the state’s next generation of CEOs in the retail and food product industries.

Burdette says what sets East Meets West apart from other startup and business conferences he’s attended is the ability of attendees to interact with speakers. “There were folks from the audience asking questions, sharing ideas and getting feedback in real time. It’s quite distinct from other events in the industry and the startup community.”

Adds Farnsworth: “If you go to one of these large events, like 10,000, 15,000, the only time you’re seeing the speaker is up on stage, or even on a monitor. It’s like a rock concert type of environment, where you’re not even interacting.”

Another bonus for attendees, she adds, is the first day is spent at places across Oahu and includes outdoor activities. “I hate the idea of spending the whole time in a hotel ballroom when you’re here in paradise!” Day One of East Meets West features a downtown Honolulu tour of Blue Startups and other accelerators, one-on-one meetings, lunch with fellow participants and speakers, and optional activities such as hiking, stand-up paddling and learning how to pound poi. 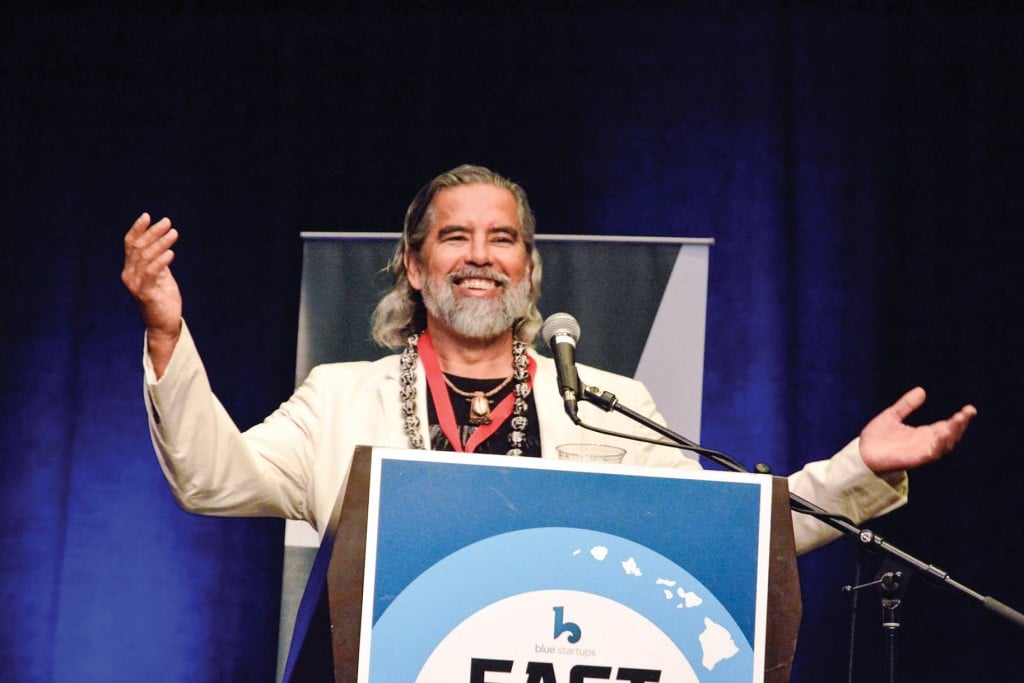 Henk Rogers is a co-founder of East Meets West.

Day Two is more of a traditional conference and this year takes place at the Sheraton Waikiki. Attendees will listen to keynote speakers and join 30-minute breakout sessions. Because this is put on by Blue Startups, the event also includes a startup pitch session, in which 10 companies – five from the U.S. and five from Asia – compete for funding. “We use the event as a way of vetting potential applicants for the next cohort (at Blue Startups). It’s a great way for us to get to know them and understand their business,” Farnsworth says.

New this year is the Hawaii showcase, an exhibition of 10 to 15 Hawaii-based companies. The conference will also include an entrepreneur boot camp, which includes actionable advice on search engine optimization, fundraising and other topics.

Burdette is looking forward to reconnecting with past attendees and meeting new ones. “Outside of Silicon Valley and Boston and New York, you don’t have a natural venture capital community,” he says. “One of the things about the startup community in Hawaii is there is a core group of folks that have been passionate about that community and building that community for a while. It takes a lot of work and a lot of energy.”

East Meets West
January 31 and February 1
Use the promo code “HawaiiBusiness” for 30% off!
Sheraton Waikiki and various other locations
Register for the event at www.eastmeetswest.co