It’s trivia night and the question is: “What’s the most abundant man-made material on the planet?” Would you guess plastic? Paper? Steel?

If you think about the sheer quantity of buildings and roads that mankind has built around the globe, you might get the correct answer: concrete. Concrete is so ubiquitous, it’s actually the second-most used material on the planet after water, according to the nonprofit Global Concrete and Cement Association.

But all that concrete contributes immensely to climate change. That’s because manufacturing concrete and cement (a major component of concrete) requires a lot of energy and is traditionally carbon-intensive, putting industrial concrete manufacturing among the top five sources of carbon emissions on the planet.

CO2 mineralization takes waste carbon dioxide from an industrial emitter (usually a gas company or a power plant) and injects it into a concrete mix, creating a chemical reaction that turns the carbon dioxide into solid calcium carbonate. The resulting concrete mix gets incorporated with other ingredients to form the final product of carbon-infused concrete. Essentially, it’s carbon upcycling packaged in a green science experiment.

To test the use of carbon-infused concrete in roads, the Hawai‘i Department of Transportation this year embarked on a pilot project for the construction of the Kapolei Interchange Phase 2. HDOT sourced locally produced concrete from Island Ready-Mix Concrete that is made with innovative technology from CarbonCure, a Nova Scotia-based manufacturer of carbon dioxide (CO2) mineralization technology. 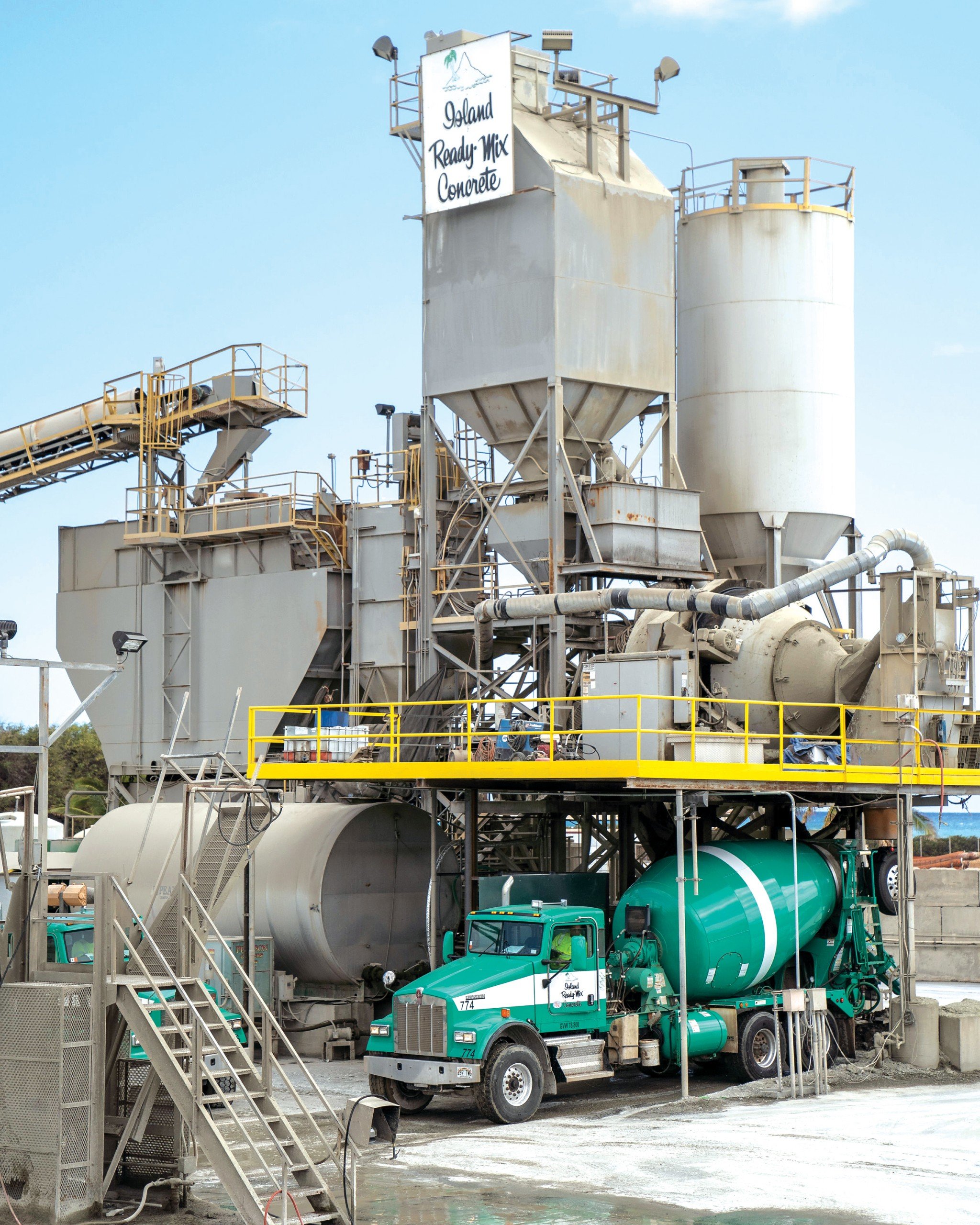 CarbonCure – which works with concrete manufacturers to install its technology in plants worldwide – first broached the idea of bringing its green concrete technology in Hawai‘i to Elemental Excelerator, a Honolulu-based startup accelerator that funds companies looking to improve energy, transportation and other systems that impact people’s lives. Elemental Excelerator liked CarbonCure’s vision, became a supporting partner and provided funding to help broker partnerships with HDOT and Hawai‘i Gas, which would supply the waste carbon dioxide used to produce the concrete.

To complete the local public-private partnership, CarbonCure brought on Island Ready-Mix as its first producer in late 2018. CarbonCure has also begun working with a second local producer, HC&D, and says it eventually hopes to collaborate with local concrete producers across O‘ahu.

CarbonCure says concrete produced using its technology not only has a lower carbon footprint but is also stronger than conventional concrete – and just as cost-effective. “By taking what would otherwise be pollution, a greenhouse gas, turning it into a mineral that becomes permanently embedded in the concrete, we get rid of it forever,” says Christie Gamble, senior director of Sustainability at CarbonCure.

“More importantly, the mineralization process enhances the strength of the concrete, and this allows concrete producers to use less cement. Cement is the main ingredient that gives concrete its strength, and it’s quite carbon-intensive.” Same quality and price, with a reduced carbon footprint, says Gamble.

In May on an access road for the Kapolei Interchange Phase 2, 150 cubic yards each of carbon-infused concrete and standard concrete were poured next to each other for a side-by-side comparison. More time is needed to gather data and analyze results to see if the concrete meets the road, so to speak.

In April, Honolulu’s City Council passed a resolution requesting – though not requiring – that all new city infrastructure projects consider using carbon-infused concrete. Two months after Honolulu passed its resolution, an environmental commission in Austin, Texas, unanimously voted to explore the uses of carbon-infused concrete. During the 2019 U.S. Conference of Mayors in Honolulu in July, mayors from across the nation pledged to adopt similar resolutions for their jurisdictions. “It’s a perfect example of Hawai‘i as an estuary for policy and technology innovation,” says Danya Hakeem, director of agriculture and circular economy innovation at Elemental Excelerator. 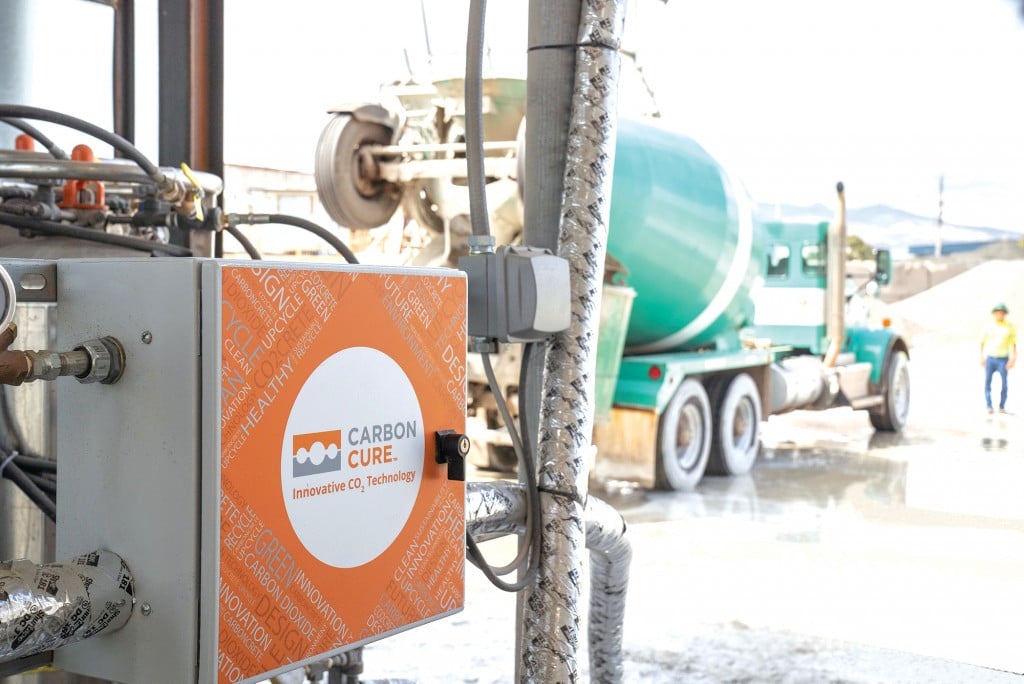 Above: The CarbonCure Technology metering and delivering a precise dosage of post-industrial CO2 into Island Ready-Mix concrete production in Kapolei.

Island Ready-Mix started offering carbon-infused concrete this year. “It has generated a lot of interest from state agencies and local developers. I believe that going forward the product will be included in a large portion of our concrete mixes,” says Shorty Kuhn, VP and GM of Island Ready-Mix Concrete.

HC&D is equally optimistic about the opportunities once its product manufactured by using CarbonCure technology hits the market. “We expect strong interest from the industry once we prove we can deliver on consistency, quality and service,” says Wade Wakayama, president of HC&D.

Architects, developers and construction companies that use concrete say incorporating the material is an exciting prospect, with the caveat that carbon-infused concrete still needs a lot of vetting in the field before the final verdict is in.

“We’re strongly advocating its use,” says Bettina Mehnert, president and CEO of architecture firm AHL, who explains that it’s premature to provide details on how the firm might use it because the material is new and hasn’t yet been used in any buildings in Hawai‘i.

“We have several projects on the drawing board that are considering it,” adds Lester Ng, AHL’s director of design and sustainability.

Mark Yonamine, deputy director of Honolulu’s Department of Design and Construction, says the city is also considering how it could use the material.

Mehnert sees additional environmental and economic benefits to using a locally produced material. Carbon-infused concrete “is great in Hawai‘i where we traditionally use more concrete, because steel needs to be shipped here, which is expensive and not really sustainable,” says Mehnert.

“What I find exciting is that this is an evolution of the sustainability efforts from 15 years ago, when certifications like the Living Building Challenge encouraged designers to use locally sourced materials. Meeting these sustainability targets can be hard. People say, ‘Oh, you can use the Albizia wood,’ but that’s super soft wood. You can’t do anything structural with it!” she says.

Gamble says the use of carbon-infused concrete in construction is a window into the future of climate solutions using win-win models that not only reduce carbon emissions but also use CO2 in beneficial ways. The concept has spawned an emerging industry known as CO2 Utilization, which some project to be a trillion-dollar industry by 2030.

3 Other Trends in Construction Innovation

Prefabricating off-site adds efficiency to the construction of repetitive structures like office buildings, hotels and apartments. Modular structures are often cheaper, and faster and less wasteful to build. This trend could also help Hawai‘i meet its growing demand for new affordable housing.

The use of drones in project management and surveying is among the hottest trends in construction. Equipped with cameras and other high-tech features, drones can access remote locations, collect data and capture images that can help track project progress, create 3D mapping and even complete safety inspections.

As new construction monitoring tools like drones become prevalent, more real-time data will be collected from construction sites. Predictive analytics tools use this data and machine learning to provide construction managers with project forecasts in critical areas such as budgeting, scheduling and safety to anticipate both problems and opportunities.

Each month, the team at Sultan Ventures and XLR8HI explores Hawai‘i’s growing innovation community, including Island startups, entrepreneurs, founders and the tech sector.