Hawai‘i got half of its imported crude oil in 2020 from Russia and Libya, which concerns at least one local environmental organization.

Par Hawaii, the leading purchaser of crude oil in the Islands, says 34.4% of its imported crude oil last year came from Russia and 19.9% from Libya. The company says that obtaining oil from those two countries is the best environmental choice available to meet Hawai‘i’s oil needs. Oil was imported from other countries as well, including Argentina and Sudan, while the main domestic source was Alaska.

Jeff Mikulina, executive director of the Blue Planet Foundation, says it is easy to talk about the benefits of shifting to renewable energy, but “we rarely talk about the other side of the equation, which is where our fuel comes from, and the places that it comes from are places that don’t necessarily align with our values,” he says.

“We are fostering corrupt regimes there by sending our hard-earned dollars to those countries when we have alternatives here.”

Russia’s hacking of U.S. government and private computer systems, plus its takeover of Crimea, its semi-covert invasion of Eastern Ukraine and its violent repression of internal dissent, prompted major retaliation by President Joe Biden’s administration this year. Nonetheless, the U.S. imported more oil from Russia in 2020 than any other nation aside from its North American neighbors, Canada and Mexico, according to the U.S. Energy Information Administration.

Libya has splintered since the overthrow of dictator Moammar Gadhafi in 2011, but the U.S. and many other nations recognize the current government based in Tripoli and support its efforts to rebuild the nation. Libyan oil is imported by many European countries. 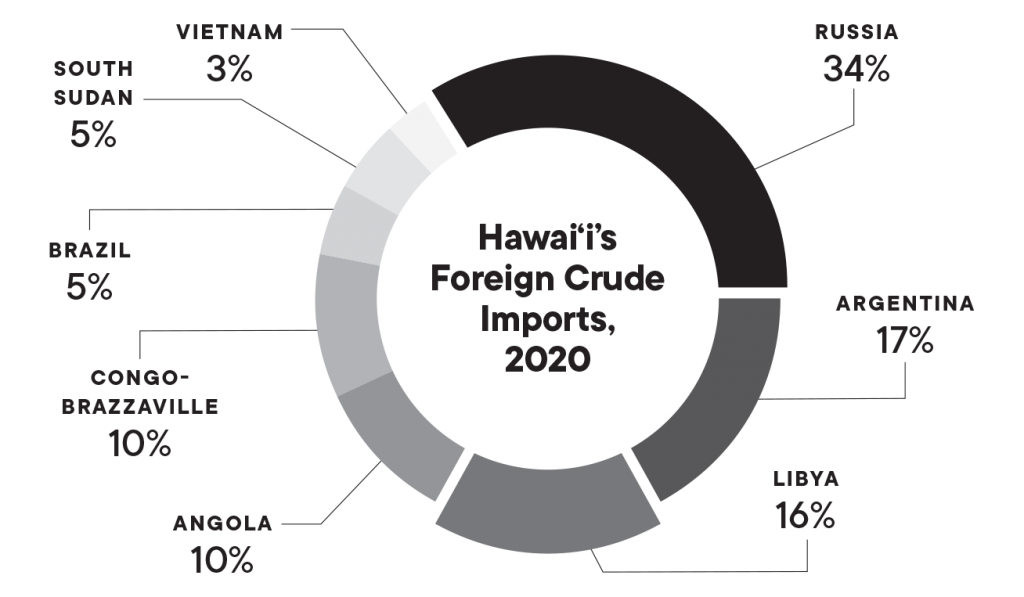 Par Hawaii says it supports Hawai‘i’s transition to renewable energy, but in the meantime, oil is needed to power cars, planes and electrical generators. And the available oil that works best in the local refinery and burns cleaner than the alternatives is largely from Russia, Libya and Alaska, say Eric Wright, senior VP and Par’s lead executive, and Richard Creamer, VP of refining.

Hawaii Business Magazine interviewed Wright and Creamer and they followed up with added written materials. “Par Hawaii does not own oil in the ground and does not have its own crude oil exploration and production activities. The company works with third-party trading organizations to purchase crude oil from countries approved by the United States,” write Wright and Creamer.

“Low-sulfur crude oil is ideal for manufacturing low-sulfur fuel oil for Hawaiian Electric to use for electrical power generation. Using low-sulfur crude also means less sulfur emissions in the air, which is good for the environment.” Par Hawaii writes that they prefer purchasing crude from Alaska when possible. However, since this crude has a higher sulfur content, the utility fuels that are produced need to be blended with other products to meet environmental requirements of Hawaiian Electric’s fuel for generating electricity.

With this purpose in mind, Libya’s crude oil has a lower sulfur content and is good for producing low-sulfur fuel oil for Hawaiian Electric. Russia’s crude oil is turned into a lot of jet fuel and has relatively low transportation costs from Russia’s Pacific ports.

Mikulina says the best choice for Hawai‘i is to use less oil. “The faster we can move to oil free alternatives, the better off we’ll be, the more money will be in our economy, and we can rest at night knowing that we’re not supporting places that don’t share our same values.”