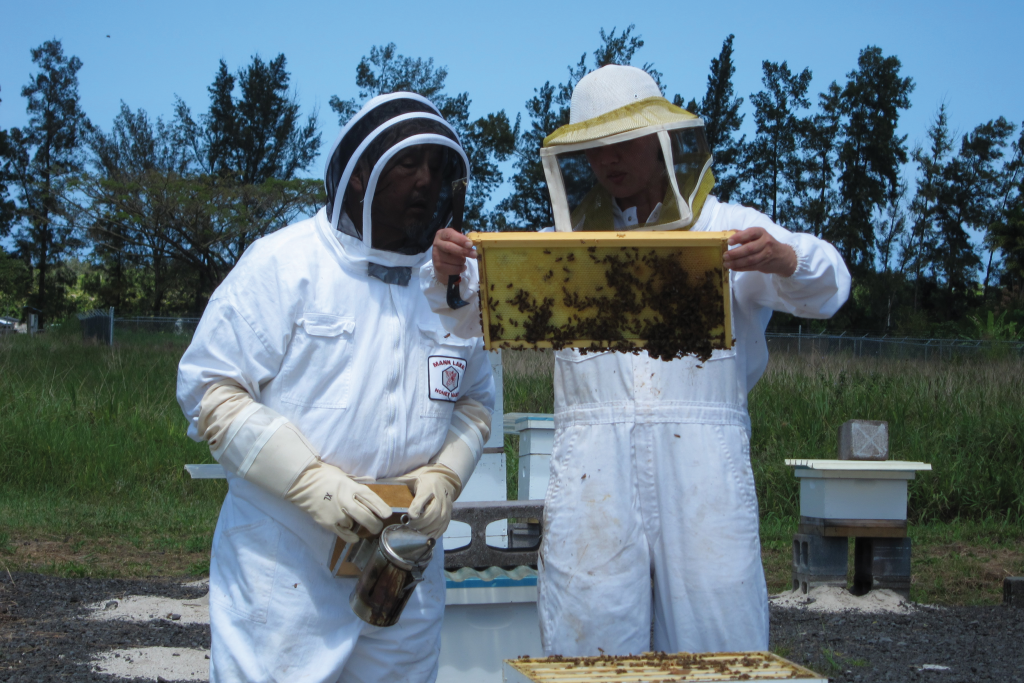 When Michael Harris and his sons acquired hives for their Wao Kele Farm in Puna in 2007, the beekeeping industry was much easier. “You’d buy a colony with a queen and hopefully it turned into a productive colony,” says Harris, explaining how simple it seems in retrospect.

Today, a slew of problems have “overwhelmed” Hawaii’s beekeepers, says Danielle Downey, an apiary specialist for the state government. “There are beekeepers that go to their colonies and find them dead. Lots of beekeepers,” she says.

Darcy Oishi, biological-control section chief for the Hawaii Department of Agriculture, blames the crisis on a “trifecta of problems”:

Varroa mites
First found in hives in Oahu’s Makiki Valley in 2007, have spread to the Big Island, home to more than half of Hawaii’s 10,000 to 15,000 managed bee colonies;

Nosema ceranea
An intestinal parasite specific to European honey bees, which represent all of Hawaii’s commercial bees; and

Small hive beetles
Which were first detected on the Big Island in April 2010, and have since been detected on Oahu and probably Molokai, too.

“These three together have the ideal mix to kill off bees,” Oishi says. “Beekeepers never have had to deal with these problems. … (and) are forced to be diligent to not lose their hives.”

On top of the decline in domesticated bees, “the feral bee population is plummeting,” Downey says. “We don’t know the impact of that feral bee loss” because so much of Hawaii’s agriculture industry and wild plant life are dependent on feral bees.

Oishi says public awareness is “critical at this juncture,” as does Dr. Lorna Tsutsumi, an entomology professor at University of Hawaii-Hilo, who teaches the state’s only courses on beekeeping and honey production.

In June, Tsutsumi and agriculture experts at UH-Hilo teamed with celebrity chef Alan Wong to launch the Adopt-a-Beehive program. Donate $300 to $1,000 to sponsor your own personal beehive managed by a UH-Hilo beekeeping student and support the school’s beekeeping program. Call (808) 933-1945 for more information.

In July, Gov. Neil Abercrombie signed House Bill 866, which creates positions for an apiary specialist, a planner and two technicians. The positions aren’t funded this fiscal year, but the Department of Agriculture hopes the Legislature and governor will fund them next year. Federal money is paying for a state apiary program this fiscal year, but that is limited to varroa mites, Oishi says.

“There’s no funding for the small-hive beetle or the (nosema ceranea) disease,” he says. “The problems are interrelated, but you can’t address them like that because of the funding.”

Harris and his sons are doing everything they can to protect their 70 hives, and look to state government experts for any support and expertise possible.

As they saw other beekeepers being wiped out by the three threats, they have become more committed.

“We had a small farm with a couple hives of bees and now we’re full-time beekeepers,” explains Harris, emphasizing the diligence required to protect the bees. “We’re not big beekeepers, we’re small. But we’re like one of a dozen left on this side of the island.”

A survey of 59 Hawaii Island beekeepers showed that their 4,622 colonies were cut in half during 2010, to just 2,230 by the end of the year, says the Big Island Beekeepers Association. A majority of the beekeepers surveyed attributed their losses to small hive beetles or a combination of small hive beetles and varroa mites.

What you can do

The state Department of Agriculture and the University of Hawaii-Hilo suggest these ways to support local beekeepers and protect Hawaii’s bees:

Encourage the Legislature and governor to permanently fund the four new apiary positions.

Build a bee-friendly garden. Choose herbs and a variety of flowers so there is something blooming throughout the year (more information at www.pollinator.org/guides.htm).

Use pesticides carefully and sparingly. Avoid your bee habitat. Spray in the morning and at night, and avoid spraying flowers.

The Western Apicultural Society Conference at the Hapuna Beach Prince Hotel, from Sept. 12 to 15, will bring together academics, researchers, beekeepers and bee enthusiasts to explore solutions to Hawaii’s bee crisis.