Income inequality led the agenda at the 2015 World Economic Forum in Davos and has sparked spirited debate in Washington, D.C., and across America, where the gap between the nation’s richest citizens and everyone else has been growing for four decades. While most economic research, including Thomas Piketty’s bestselling book, “Capital in the 21st Century,” has focused on national and global trends, a recent study offers state-level data showing that Hawaii has one of the lowest levels of income inequality in the nation. However, the rate of inequality in Hawaii has been rising for decades.

Economics professor Mark Frank of Sam Houston State University published a study that provides annual, state-level data on the top 10 percent and top 1 percent of income shares, a primary indicator of inequality. Analyzing U.S. income tax filings from 1916 to 2012, he found that “among many of the states, inequality followed a U-shaped pattern over the past century, peaking both before the Great Depression and again at the time of the new millennium.”

Frank’s conclusion aligns with findings from other research, but he also uncovered significant variability among states. Northeastern states aligned closely with the overall U.S. pattern but many of the Western states – including Hawaii – did not.

“Hawaii has one of the lowest levels of top 1-percent income shares in the country,” he says, noting that, in 2012, Hawaii ranked third lowest for income inequality, with its top 1 percent claiming 13.36 percent of the total income for all Hawaii residents. Only Maine and West Virginia scored lower. In contrast, the top 1 percent of income earners in Wyoming accounted for a 49.7-percent share.

Hawaii also ranked third from the bottom in Frank’s analysis of the income for the top 10 percent, trailed by Alaska and West Virginia. Historically, the state experienced a post-statehood decline in inequality before levels began to rise in the late 1970s. (The Hawaii data used by Frank starts in 1959 with statehood.)

Eugene Tian, chief economist for the state’s Department of Business, Economic Development and Tourism, calls the study “the most comprehensive research in income distribution at the state level.” Tian notes that income-tax data excludes low-income individuals (something Frank’s study acknowledges), and he prefers to use the Gini co-efficient to track inequality. A Gini co-efficient analysis shows inequality rising after statehood, but improving relative to other states. “In 1959, Hawaii ranked the 20th worst among the 50 states and the District of Columbia, and in 2012, it was the fifth best,” Tian says. Hawaii’s current ranking stems from two main factors: steeper rises in inequality among other states and Hawaii’s economic growth.

The strong presence of unions in Hawaii also helped lift workers’ salaries and wages, says Sumner La Croix, chair of the economics department at UH-Manoa. Looking at the top end of the income spectrum, he points out that Hawaii has fewer highly paid executives because of its relatively small finance industry and an absence of national corporate headquarters. “If you go to Seattle, you have Microsoft, Costco and Amazon. Take the top 50 executives of these big firms and you have a lot of people being paid big bucks,” La Croix says, noting that, while Hawaii CEOs “are well paid by absolute standards, they’re not by national standards.”

“The pertinent question is not whether income and wealth inequality is good or bad,” writes Robert Reich, a secretary of labor in the Clinton administration. “It is at what point do these inequalities become so great as to pose a serious threat to our economy, our ideal of equal opportunity and our democracy.” America, he argues, is at that tipping point.

Hawaii may be further from tipping, but absolute inequality is on the rise. Frank’s research shows that income shares for the top 1 percent in Hawaii nearly doubled from 1978 to 2012, from 6.8 percent to 13.4 percent. La Croix finds this trend worrisome.

“The fact that we have less inequality than other states shouldn’t blind us to the fact that it’s really hard for the people who are at the bottom third of income distribution,” he says. “With our high housing costs, it’s tough to get by in Hawaii, so people do feel a certain amount of inequality.” Increasingly, he adds, economists are looking at inequality through the lens of “income mobility,” which measures the chances that a child raised in a lower-income family can attain a higher income as an adult. 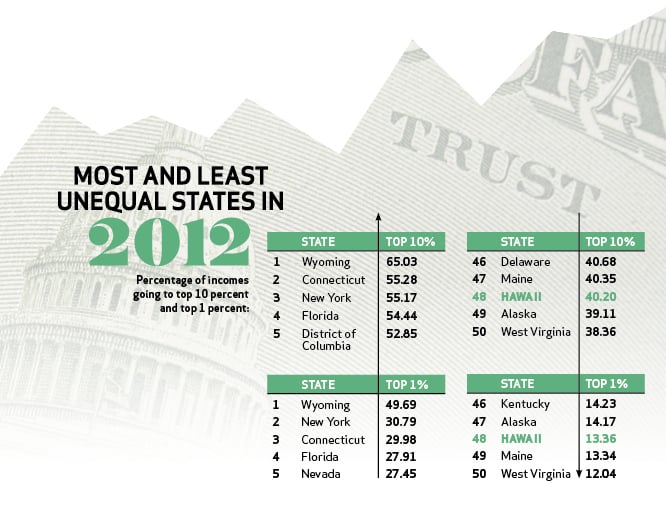 The Equality of Opportunity Project, published in 2013 by a national team of prominent economics professors, offers insights into that question. Sifting through more than 40 million anonymous earnings records, researchers concluded that while overall income mobility in America has remained relatively stable for the past 50 years at around 8 percent, there were wide variations by location.

According to the report, Honolulu ranks 10th highest in mobility (equal to Boston and New York City) among America’s 100 largest commuting zones. Calculations are that a child growing up in a family at the bottom 20 percent of income distribution on Oahu has a 10.5 percent chance of climbing to the top 20 percent of family income as an adult. A child on Kauai has a 9.9 percent chance, compared with 8.5 percent in Maui County and 6.8 percent in Hawaii County.

The study shows that San Jose, California, leads the nation in economic mobility, with 12.9 percent of children from the poorest quintile climbing into the top quintile of income. Memphis, Tennessee, comes in last at 2.8 percent. Once seen as the land of opportunity, the U.S. now trails most other developed countries in economic mobility, according to the various studies. In fact, in Denmark, a child is twice as likely to escape poverty as in the U.S.

The Equality of Opportunity Project report finds that greater mobility is linked with quality K-12 schools, less residential segregation by income and by race, and less income inequality, more stable families and stronger social engagement. The report also cautions that income inequality has increased significantly over the past decades, lending greater weight to the consequences of the “‘birth lottery’” – the parents to whom a child is born. Children today must climb a more difficult economic ladder to get to the top than children four or five decades ago, the project’s report says. Those challenges can be overcome, but the likelihood is diminished.

Despite Hawaii’s favorable rankings in equality and mobility, La Croix says, we can do more for the poor. He underscores the importance of providing families with equitable access to healthcare and education, especially during a child’s early years. “Because of social science research, we now know that the first five years of a child’s life are crucial. If a child’s not getting critical support – in prenatal care, in nutrition, in education – then that child has less of a chance at future success. It’s a big burden for that child,” he says, “and for society in the long run.”

“It’s a natural trend that income inequality worsens over time because the wealthy have the resources to generate more income,” Tian explains, but he’s also optimistic that Hawaii will continue to balance both economic growth and equity in the coming years.