It’s summertime. Tourists are back and the economy is revving up. Many businesses, including our own, are eager to leave the challenges of 2020 behind.

But a numbers-based retrospective can also offer lessons for the future. What industries were most resilient? Which organizations grew despite the shutdown, and why? Who might be positioned to grow in the long term?

For 38 years – through Japan’s asset price bubble of the late 1980s, the shockwaves of 9/11 and the Great Recession to a once-in-a-century pandemic – Hawaii Business Magazine has tracked the state’s economic highs and lows in our annual Top 250 list. The latest list serves as a record of a tumultuous year, from the pain felt in the tourism sector to the ongoing construction boom.

To create the list, we surveyed organizations and searched public sources to gather 2020 gross revenue figures for many of the largest, most influential companies and nonprofits in Hawai‘i. The list is a partial picture, though, as it doesn’t capture all the smaller businesses that struggled with stay-at-home orders or the many companies in tourism and other sectors that did not report their numbers to Hawaii Business Magazine or public sources.

2020 was rough. The UH Economic Research Organization reported that Hawai‘i’s unemployment rate in December 2020, at 11.6%, was the second highest in the nation, trailing only Nevada. Compare that to 2019’s unemployment rate of just 2.5%. The state Department of Business, Economic Development & Tourism found that Hawai‘i’s real GDP fell 8% in 2020.

Among Top 250 companies as a whole, the year was much less dire. Employee numbers in 2020 were down just 6%, and revenue fell even less. While gross annual sales in 2019 rose 9% on average over 2018, the 2020 decline was just 0.58% among organizations on the list – a far smaller contraction than the overall economy’s.

The relatively strong showing is, in part, a result of the self-selecting nature of the list; some companies that did not report their 2020 financial results to Hawaii Business Magazine may have suffered difficult years. But even among those companies that did report results, not everyone sailed through unscathed.

Only eight companies in the tourism and leisure category reported their 2020 figures:

Figures were similar for Hawaiian Airlines and Alaska Airlines, which respectively reported revenue drops of 70.2% and 72.6%. Aloha Air Cargo, on the other hand, saw a gain of nearly 21%, a benefit of moving goods instead of people.

Unlike tourism, construction was deemed an essential industry and powered through the pandemic with hotel renovations, new and remodeled homes, county and state infrastructure projects, and military construction.

Hawaii Business Magazine’s Noelle Fujii-Oride reported in February 2021 that the construction sector – including mining, quarrying, and oil and gas extraction – made up 6.2% of the state’s GDP in the first three quarters of 2020. That’s almost the same size as health care and the military, according to economist Paul Brewbaker, who calls the industry “remarkably resilient.” 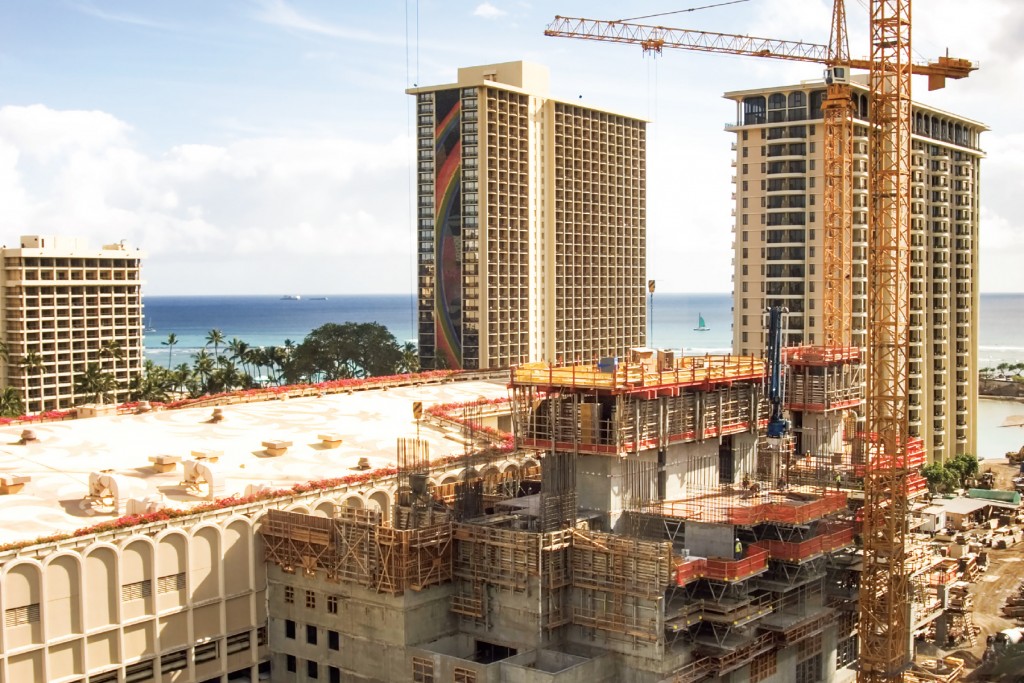 From March to November 2020, total jobs in the sector were stable at roughly 36,000 to 38,000 positions, according to DBEDT monthly data.

The Top 250 list reflects these broader trends. Forty companies on the list are in the construction and development category, with an average gross revenue of about $96 million in 2020 – a 15.4% increase over 2019. The average employee count in 2020 was nearly 182, a rise of 3.2% from the previous year.

Health care proved to be equally resilient in 2020. According to DBEDT data, the health care and social assistance sector makes up about 6.8% of Hawai‘i’s GDP, and big players such as Kaiser Permanente, The Queen’s Health Systems and Hawai‘i Pacific Health ranked seven, eight and nine on the Top 250 list. Insurance giant HMSA landed the top spot for the sixth year in a row.

Both Kaiser and Queen’s reported 5.9% gains over 2019’s gross revenue, a remarkable feat in a year when many patients canceled appointments or delayed health care, and tens of thousands of unemployed people and their families were forced into Medicaid, which pays far less than private insurers.

Paul McDowell, executive VP and CFO of The Queen’s Health Systems, says that exceptionally strong pre-pandemic performance helped the organization weather the storms. He notes that Queen’s had opened a surgical unit at its West O‘ahu facility, expanded the emergency room at its Waimea hospital on Hawai‘i Island and acquired Island Urgent Care’s string of clinics.

“Queen’s was experiencing market share gains and growth in our patient volumes as a result,” writes McDowell in an email. “Once the full impact of the pandemic was felt, our financial performance was significantly impacted.”

“In the early days of the pandemic, hospitals were effectively bidding against each other for the limited supply of PPE. That drove up prices dramatically,” McDowell writes. “We were buying N95 masks by the shipping container.”

While Queen’s didn’t report 2020 net profit/loss figures that would reflect these unexpected costs, the solid uptick in gross revenue provided a cushion.

An Outlier in Education

Among the eight independent schools and universities on the Top 250 list, most reported small variations in revenue from 2019 to 2020, with Punahou reporting the largest drop, at 11.6%. At the opposite end, Kamehameha Schools’ revenue rose more than 88% – the result of a deliberate accounting shift to more accurately show earnings from its $12 billion endowment.

“We are finally getting aligned with our peer institutions across the country, which are primarily nonprofit, educational institutions, mostly higher ed with large endowments,” says Timothy Slottow, executive VP of finance and CFO at Kamehameha Schools.

The schools’ 2020 audited financial statement now reports the $471 million distributed from the endowment, which is made up of a diversified global financial portfolio and a smaller Hawai‘i-based commercial real estate portfolio. The 4% annual payouts are based on five-year averages to smooth out market fluctuations, says Slottow.

“It’s not about how much we have, but what we do with it.” – Timothy Slottow, Executive VP of finance and CFO, Kamehameha Schools

But unlike many wealthy institutions that draw 20% to 50% of their annual operating budgets from their endowments, Kamehameha relies on it to cover more than 90%, says Slottow. Nearly all goes toward running three K-12 campuses and a multitude of preschool, public school, scholarship and community initiatives, particularly as tuition is set low – below $7,000 annually – and most students receive financial aid. “Financial aid equals about 80% of what we charged,” explains Slottow.

“It’s not about how much we have, but what we do with it,” he adds. “Actually, we don’t have nearly enough money to improve the educational outcomes for every Native Hawaiian,” which is what Kamehameha Schools would like to do.

Nonprofits Were a Lifeline

Rounding out this overview are many of Hawai‘i’s nonprofits, which fed, housed and cared for both the chronically poor and the tens of thousands of newly jobless people who struggled through dual health and economic crises.

The nonprofit category includes 24 organizations, which reported an average revenue increase of more than 15%. Many were lifelines to people in need, including the Hawai‘i Community Foundation, the Hawaii Foodbank, Aloha United Way, Catholic Charities Hawai‘i, Goodwill Hawaii, Child & Family Service, and Parents And Children Together.

Newcomers to the Top 250’s nonprofit category include Easterseals Hawaii, Hale Kipa, American Red Cross of Hawaii, Legal Aid Society of Hawai‘i, Make-A-Wish Foundation of Hawaii, Aloha Harvest and The Food Basket Inc. Based in Hilo, the Food Basket’s revenues jumped more than 200% in 2020 – a telling indication of both a difficult year and a generous community.

Along with these nonprofits, a number of smaller but ambitious companies made the cut this round. We’re pleased to see so many up-and-comers who are growing and prospering.

Top 250 companies and nonprofits are ranked by gross sales or revenue, key indicators of market dominance and influence.

Each spring, Hawaii Business Magazine surveys companies in our database and gathers updated financial figures, employee counts, names of executives and other information.

Businesses are asked to calculate gross sales using generally accepted accounting principles, while nonprofits report revenue from contributions, funding for services or proceeds from activities that support their mission. All provide the name of an executive who verifies the self-reported figures.

Companies headquartered in Hawai‘i report sales from all their subsidiaries worldwide; those based elsewhere report Hawai‘i figures only. While we prefer calendar year data, some organizations operate on a fiscal year.

To supplement the survey process, we draw on public records such as annual reports, financial statements and databases of the Federal Deposit Insurance Corp. and National Credit Union Administration.

Some companies with a large local presence don’t appear on the list. The omission is often because an offshore parent company can’t separate data for its Hawai‘i operations, or because the company is privately held and does not disclose financial information.

Join Next Year’s Top 250: If you would like to receive Top 250 surveys in the future or update your contact information, please email cynthiaw@hawaiibusiness.com.

Your Company Belongs on the Prestigious Top 250