Commercial fishing in Hawai’i was banned during World War II and slowly resurfaced by the early 1950s. The United Fishing Agency launched the Honolulu Fish Auction on Aug. 5, 1952, and it celebrated its 70th anniversary this year at Honolulu’s Pier 38.

The agency says it’s the only fish auction in Hawai‘i and the only large-scale tuna auction in the Pacific this side of Tokyo. Michael Goto, who has been running the auction for a decade, says seafood is a much bigger industry in Hawai‘i than many people might realize. 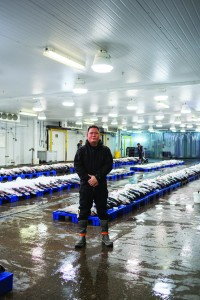 Michael Goto is both manager of the Honolulu Fish Auction and its chief auctioneer. | Photo: Aaron Yoshino

“The whole business has been over-looked over the years,” Goto says. “It is the number one food-producing industry in the entire state of Hawai‘i. No one else comes close to this industry as far as food production.”

Sales from Hawai‘i’s longline fishing boats are worth between $100 million and $120 million a year at the ports before the fish hit the wholesale and retail sectors and gets marked up, he says.

He says more than 90% of people in the state consume seafood regularly and seafood is a big draw for tourists too. “Tourists come to Hawai‘i not to eat chicken or beef, but what we’re known for: fish,” he says.

Based on Japanese Auctions

Honolulu’s fish auction is based on the system at Tokyo’s historic Tsukiji Market, opened in 1935 and famous for its tuna auctions. Goto says the Honolulu auction is a big draw for Japanese tourists because “it’s a very familiar culture for them.” Tours are by reservation only; book one at hawaii-seafood.org/auctiontour.

Goto says an estimated 140 vessels are in the local fishing fleet and those with catch to sell pull up by Pier 38. The auction is open Monday to Saturday, with crews unloading fishing boats in the wee hours.

Fish are weighed and tagged, and their temperatures taken for health and safety reasons. The fish are then put on pallets and iced. 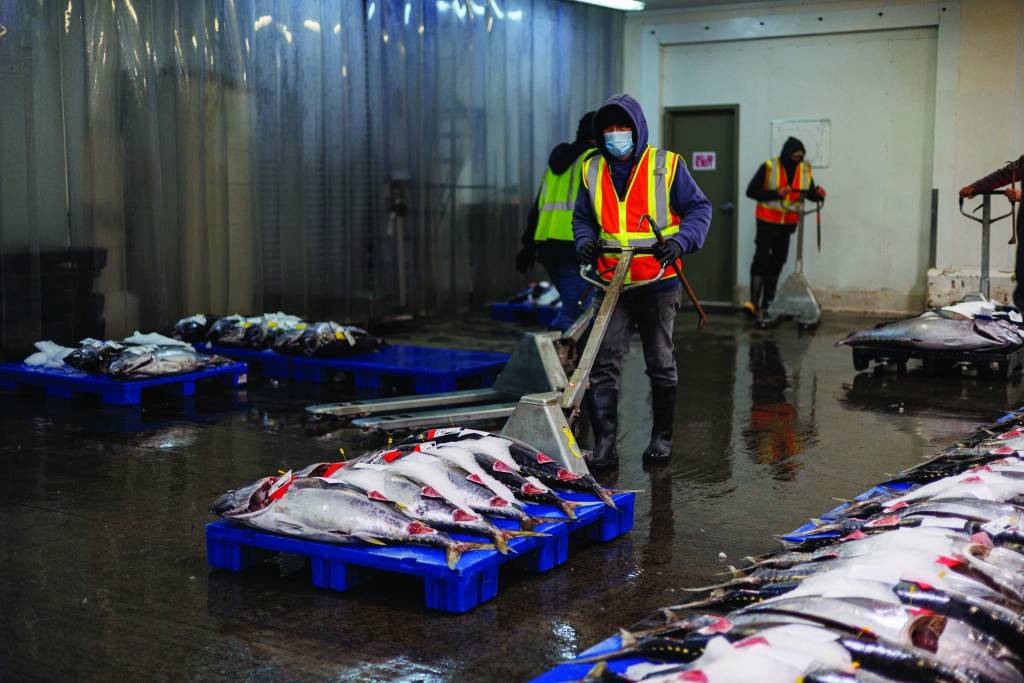 Bidding kicks off at 5:30 a.m. with the fish auctioned individually in the order that each boat arrived. Buyers bid against each other until the day’s entire allotment is sold, with Goto as the auctioneer. On a busy day, 70,000 to 90,000 pounds of fish will be sold. On such days, Goto might spend as many as 14 hours on the job.

“As much as it varies day to day, depending on the vessels that come in, it is a very systematic operation with the sole goal of getting the fish out to the vendors as quickly as possible to be sold to consumers,” he says.

Hawai‘i commercial fisheries landed 30.4 million pounds of pelagic species in 2020, a decrease of 17% from the previous year, according to the Western Pacific Regional Fishery Management Council.

Pelagic fish are those that live in the ocean’s pelagic zone – neither close to the bottom nor near shore. Hawai‘i’s deep-set longline fishery targets ahi – bigeye and yellowfin tuna – and Michael Goto says those two species comprise about 75% of the weight of all fish caught by the local fishery and sold.

Imports are the Main Competitor

The Honolulu Fish Auction operates like a consignment store. It receives fish from independently owned vessels and sells them on behalf of the vessel owners. The auction collects a commission before paying the vessel owners.

Some of the wholesalers who buy from the auction have satellite locations on the Neighbor Islands, so a lot of the fish is shipped out “to all the major destinations on all islands,” Goto says. 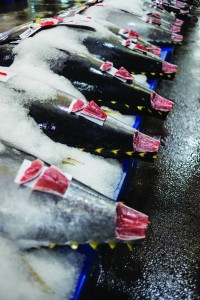 He says the auction’s only major competitors are foreign imports because seafood, including ahi, also comes from places like Indonesia, the Philippines, Vietnam and the Marshall Islands. This can substantially change the price of fish on any particular day.

“It’s a gamble for anybody to own a commercial fishing vessel,” Goto says.

The pandemic hit Lu and other vessel owners hard. Lu describes it like a domino effect: Buyers lost customers, wholesalers lost buyers, the auction lost sales and most vessel owners struggled to run their businesses.

Goto says, “We were in the middle of auctioning fish when all of a sudden buyers started walking away because flights were getting canceled and restaurants were closing down.”

Later in 2020, business began to pick up as restaurants opened for takeout, but Goto says it was a “rough two years for the business.”

“We didn’t make money at all, but we also couldn’t stop the flow of seafood in Hawai‘i,” he says.

The auction’s post-pandemic rebound was no surprise to Lu: “Fortunately, we live in Hawai‘i where everyone knows fish and everyone loves fish.”