WHO ARE THESE ENTREPRENEURS?
WHAT PROJECTS ARE THEY PURSUING?
WHAT MOTIVATES THEM?
Here is a sampling of the businesses that are part of the NELHA family 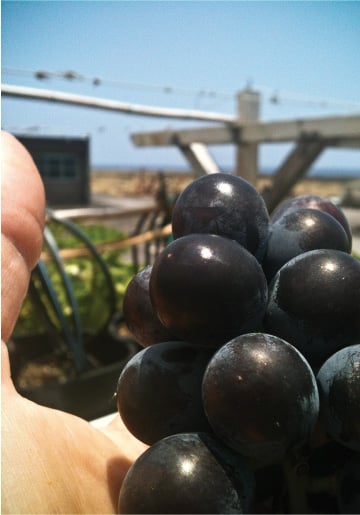 Some of the grapes that Dewpoint Systems grows using its unique minimal-water system. Photo Courtesy of Rich Bailey.

Harvesting the sky, drop by drop

Rich Bailey is growing grapes from seawater and, on the day I visit, his crop is just a few weeks from harvesting. He modestly tells me that he does not know enough to ever grow wine grapes, but his grapes will certainly be tasty enough to eat.

Bailey’s mission is to create solutions for growing food in places with little fresh water. His startup, Dewpoint Systems, uses deep seawater to condense water from the atmosphere. The cold ocean water, running through hoses above ground, pulls the moisture from the air, which then, one drop at a time, irrigates the plants. “It’s like a glass of cold water. It sweats and you end up with a puddle of water. We’re harvesting the sky, drop by drop,” he says.

Cold seawater serves a second critical purpose. Running in closed hoses underneath the plants, it chills the soil. When the soil temperature is cooler than the leaf temperature, the plant believes it’s spring and responds by growing.

“Most believe grapes need a dormancy period. But we’re outside nature’s box with these grapes here in Hawaii. We can harvest up to three times a year – every 120 days,” Bailey says.

“Right now I’m tied to a (ocean-water) pipe. I’m ready to jump as far as a small business can go and go off the grid in terms of electricity and water, opening up even more possibilities for creating freshwater sources.”

High-quality seafood for the world

Neil Sims, CEO of Kampachi Farms, keeps a chart near his desk to constantly remind him of what happened to Atlantic cod. He likens their fate to the story of the Lorax, the Dr. Seuss tale featuring a creature that warns against cutting down all of the trees of the forest. “We did it. We hunted all of the cod down,” Sims says. “The Lorax is the story of commercial fishing. If you give people enough of a commercial incentive for a common property resource, it’s mayhem. People will circumvent the rules in any way they can. The incentives for people to overfish are just too great.”

While acknowledging it has been controversial, Sims believes that fish farming can offer one way of meeting our global appetite for seafood while heeding the Lorax’s warning. But, he emphasizes, it must be sustainable and responsible mariculture, resulting in healthy fish free of disease, while reducing the amount of fish meal it takes to feed every pound of farmed fish.

The Velella Mariculture Project, which was named one of Time magazine’s “25 Best Inventions of 2012,” was a dramatic attempt to meet such goals. The experiment centered on an unanchored cage carrying kampachi raised from native broodstock. The pen was allowed to move around the eddies off Hawaii Island, away from the reef, out in the open sea.

Kampachi was chosen as the test fish because of its commercial attractiveness. It spawns regularly, has a great growth rate, reaches harvest size in 12 months and is an efficient feeder, Sims says. Plus, he adds with a big smile, “It’s delicious. A lot of people remember the first time they ate kampachi – it’s that kind of fish.”

The Velella project taught Kampachi Farms a great deal, Sims says. “We had a growth rate twice as fast as We had a feed conversion ratio of about 30 percent better. The survival rate and fish health was phenomenal – 98 percent survival rate, which was unheard of.”

Despite that success, he says with a smile, the original concept was logistically a “crazy idea.” Velella gama, the current iteration, is a drifter cage submerged in 6,000 feet of water, anchored 6 miles offshore. The cage swings around on a single mooring in a 5-mile diameter – alleviating the need to chase a free floating cage around the open ocean. The 2,000 fish being raised in it are constantly monitored – a benefit of staying within wireless range.

Sims and his team continue to experiment with ever-smaller proportions of fish meal. They are currently testing a mix that includes just 12 percent fish meal, with the rest of the mix made up of soy, canola, wheat gluten and corn gluten. “We love the image of marrying America’s heartland with the blue horizons,” he says.

He hopes open-ocean aquaculture will be recognized as a responsible source of seafood and sees this starting to happen, despite some opposition from those who see all fish farming as bad for the environment. “If you think of Malcom Gladwell’s tipping point, we’re past the pointy part. As somebody who’s passionate about wanting to have our work be meaningful and not just profit driven, to have an impact out there and being able to move us towards better management of the oceans is really gratifying.” 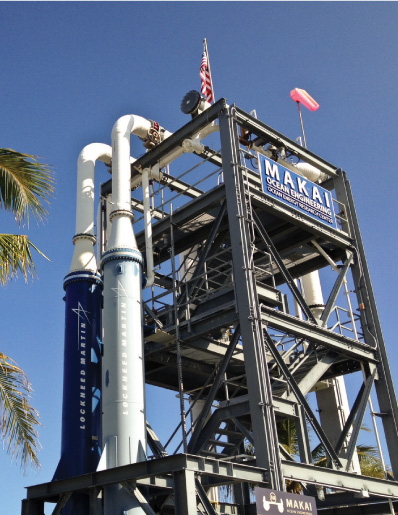 Whether the audience is a group of international investors or 100 third graders, Michael Eldred, principal investigator at Makai Ocean Engineering, is always excited to talk about the ocean as a source of clean energy. “I always say this is my kuleana, a Hawaiian word for duty or responsibility,” he explains. “I feel that it’s my kuleana to use my engineering talent to do something that’s right for the world, that’s going to benefit future generations. Producing our own energy at home is one important step.”

Eldred’s role is to spearhead new ideas on how to commercialize a not-so-new technology: ocean thermal energy conversion. OTEC is a process that creates energy by exploiting the temperature difference between warmer surface water and colder deep ocean water.

The OTEC plant at NELHA was built in 1980 after the spike in oil prices during the 1970s created an incentive for exploring alternative energy. The plant was designed for research only, however, and its output is limited to powering only about 100 homes.

Likewise, Makai Ocean Engineering has been around for a few decades, having built the deep-water pipelines that made the OTEC plant possible. Although, neither OTEC or Makai is a newcomer, the commercialization of OTECis still in its early stages. So, in many ways, Eldred and his colleagues at Makai work like they’re part of a startup, developing new ideas in the hopes of attracting investment.

Eldred acknowledges that finding investors to help build a commercially viable plant is a challenge. The ultimate goal is to build a 100-megawatt plant that could power the entire island, he says, but Makai is also open to investments in a 10-megawatt system. “At this point, we’re ready to go – we can build this smaller system at a relatively low risk.” The price is an estimated $120 million to $150 million– about a 10th of the cost of a full-scale OTEC plant, he says.

What drives Eldred is a deep concern for how his children and grandchildren will live. “I’m sad to think that our grandchildren may not have the quality of life we have if they run out of energy.”

He’s optimistic that as more people learn the possibilities of OTEC, investors will invest in the future. “As soon as people hear that this technology can produce all the electricity for the entire planet, they get interested. Ultimately, people know we have to become sustainable and this is one technology that gets us there.” 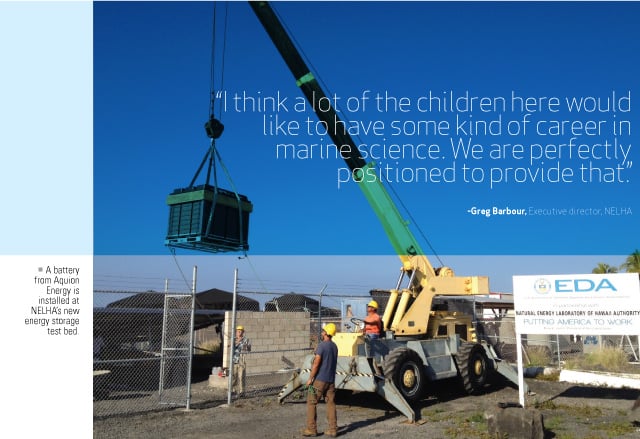 The future of NELHA’s ecosystem

People who work there believe that NELHA has long been important to Hawaii’s research in STEM – science, technology, engineering and math – but that, in the past few years, its importance has increased significantly. A UH study backs up that idea: It says the economic impact of NELHA jumped from $87.7 million in 2010 to $122.8 million in 2013.

Public interest has soared as well. A few years back, Eldred recalls, only a few hundred people would visit each year. In 2014, the Friends of NELHA, a nonprofit focused on educating the public about the activities and technologies there, hosted close to 5,000 visitors.

New developments may draw even more attention. In October 2015, a collaborative workspace is set to open, across from the administration building. Cash strapped entrepreneurs can rent temporary space or book meeting rooms without committing to a permanent office. The High Technology Development Corp. will likely have a presence there, offering business plan coaching and other support.

Perhaps most important for all NELHA’s businesses, the space will offer a hub for the spontaneous exchanges of ideas.

“That’s going to be more of the manifestation of what NELHA really could be, turning it into more of a campus rather than just a compound. Having people bump into each other and say, ‘Hey, I’ve been meaning to talk to you,’ and to be able to see where that goes. That building will spawn some phenomenal ideas,” Sims says.

CMO Laurence Sombardier hopes NELHA can host even more innovative ocean-science, technology and sustainability projects. Executive director Barbour agrees that NELHA’s future lies in what it can offer the next generation of entrepreneurs, scientists and innovators.

“My biggest hope is that we can create jobs for the children of this island, so they don’t have to leave. I know my kids are really interested in the ocean, and I think a lot of the children here would like to have some kind of career in marine science. We are perfectly positioned to provide that.

Advocates say it ensures reliable, on-time delivery of everything Hawai‘i needs, while providing a strong U.S. Merchant Marine in time of war or other crises. Opponents say the Jones Act raises prices for everyone in Hawai‘i and puts those who want to export overseas at a disadvantage.

In-Person Events Are Back But Many Caveats Remain

"Hope" and "Hybrid" are two words Hawaiʻi event planners frequently use while organizing conventions, weddings and other gatherings this year as they see the light at the end of the COVID-19 tunnel