I believe the Hawaiian people have been given a tremendous gift from Pele and that gift is this access to deep ocean water,” says Rich Bailey, owner of Dewpoint Systems. 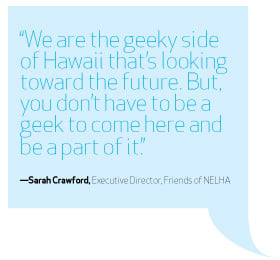 The gift of deep ocean water may be Pele’s, but the water is delivered to the surface by the Natural Energy Laboratory of Hawaii Authority’s water pipes, which reach down 3,000 feet into the ocean. That’s one of the main reasons about 40 companies are located at NELHA, including companies focused on clean energy, aquaculture and water products. Some have been there almost since the ocean science and technology park was founded in 1974 on the Kona side of Hawaii Island, but others are startups and that’s a source of pride for the lab’s staff.

“We help companies move through the dreaded ‘Valley of Death,’ so they can scale up and start attracting partners and investors,” says NELHA executive director Greg Barbour.

When asked why they are located at NELHA, most of the startup entrepreneurs talk about the access to deep water. “You don’t have to put in your own pump. You just open a valve and get clean, deep seawater,” says Syd Kraul, owner of Pacific Planktonics. He raises yellow tangs and angelfish, which are typically caught in the wild for aquariums. Such ornamental fish are difficult to raise in substantial numbers, because they are nearly invisible once they emerge from their eggs and can only eat very small food items. Kraul uses his access to deep seawater to raise copepods, a microscopic crustacean that he calls his “secret recipe” for successfully raising the aquarium fish.

The land is also a huge draw. “This is a great place to do an agriculture program because of its consistent sunlight and temperature. You minimize variability for crop production,” says Martin Sabarsky, CEO of Cellana. His company depends on this consistency to grow microalgae in ponds at the lab, using a patented method, to help produce Omega 3 oils, animal feed and fuel.

Those affiliated with NELHA are covered under a master permit system, meaning they do not have to deal with government red tape to gain access to ocean resources. “To go through the bureaucratic process of getting all those permits by yourself can take years,” Bailey says. “Here, you can set up at NELHA in a matter of months and focus on what’s most important – testing your concepts.”

NELHA’s structure also allows companies to transition from pure research to commercialization, while remaining on the campus. The High Technology Development Corp., which, like NELHA, is a state agency, provides guidance to transform great technologies into attractive business plans.

Entrepreneurs also appreciate the global networks they can access as part of the NELHA family. “NELHA attracts international businesses from Europe and Asia. I’d never be able to get that kind of exposure if I were completely on my own,” says Bailey.

Hawaii’s geographical isolation and its Clean Energy Initiative, which spurs the development of renewable-energy solutions, also draw startups to the tech park. Aquion, a company based in Pennsylvania, has an agreement with NELHA to test its batteries for use in off-the-grid areas – which are common on Hawaii Island. These batteries can capture solar power during the day, storing it for use at night or when it is cloudy. “They allow you to take energy from something uncontrollable – how much the sun is out – and make it controllable,” says Matt Maroon, senior director of product management.

Sarah Crawford, executive director of Friends of NELHA, sums up the kinds of people who are drawn there. “We are the geeky side of Hawaii that’s looking toward the future. But,” she adds, “you don’t have to be a geek to come here and be a part of it.”