The Cost of Cosmetic Surgery in Hawaii

Plastic surgery is a growing business in Hawaii, with thousands of local customers and others flying in from the mainland, Canada, Japan and South Korea for procedures, say two of Hawaii’s top specialists in the field.

Dr. Robert Peterson, chief of plastic surgery at Kapiolani Medical Center, says Kapiolani’s Athena Clinic performs about 100 surgical and nonsurgical procedures each week and has about 1,000 new clients every year, plus returning patients.

Dr. Todd Mirzai, like Peterson, is board certified in plastic surgery by the American Board of Plastic Surgery. He operates Hawaii Plastic Surgery Associates and, with thousands of clients and locations on all four major Hawaiian Islands, says he performs three to four major procedures a week.

“Repeat business and word of mouth are cornerstones of our practice,” Mirzai says.

The Hawaii Medical Association’s Physicians Directory lists 30 doctors who do plastic surgery. Nationwide, men had 1.1 million cosmetic procedures done last year, up 2 percent from 2009, according to the American Society of Plastic Surgeons. But women still accounted for 91 percent of all cosmetic procedures in 2010 – 11.5 million.

Plastic surgery is expensive but rarely covered by insurance. The cost varies among physicians, often based on their experience, the procedure, materials and technology used, anesthesia needed and other factors.

“To stay abreast of the latest technology, we are often paying a small king’s ransom for new devices and equipment,” Mirzai says. “If patients want the latest and greatest like they would have access to in Manhattan, Beverly Hills or Miami, we need to charge what will make that delivery make sense financially.”

Though most patients recover from plastic surgery at home, Mirzai is also trying to cater to those who want a complete getaway – “a full-service model.” Here’s how it works:

• Clients fly into Maui and transportation is provided from the airport;
• They stay at a private bungalow provided by Hawaii Plastic Surgery Associates near the surgical facility;
• After the surgery, clients return to their bungalows, where the surgeons do after-care “house calls.” Mirzai says this is especially important during the critical first 12 to 24 hours after surgery.

This approach fosters more interaction and comfort between surgeon and patient, Mirzai says. “It gives them less to worry about,” he says. “We are looking to establish long-term relationships with our patients rather than a ‘churn and burn,’ factory-style approach.”

This package is offered with no additional cost to the patient, he says. “We foresee this being part of a medical-tourism model that Hawaii would be well-suited for. People come to a beautiful environment, with U.S. medical-care regulations and standards for care in a nurturing, healing place.” 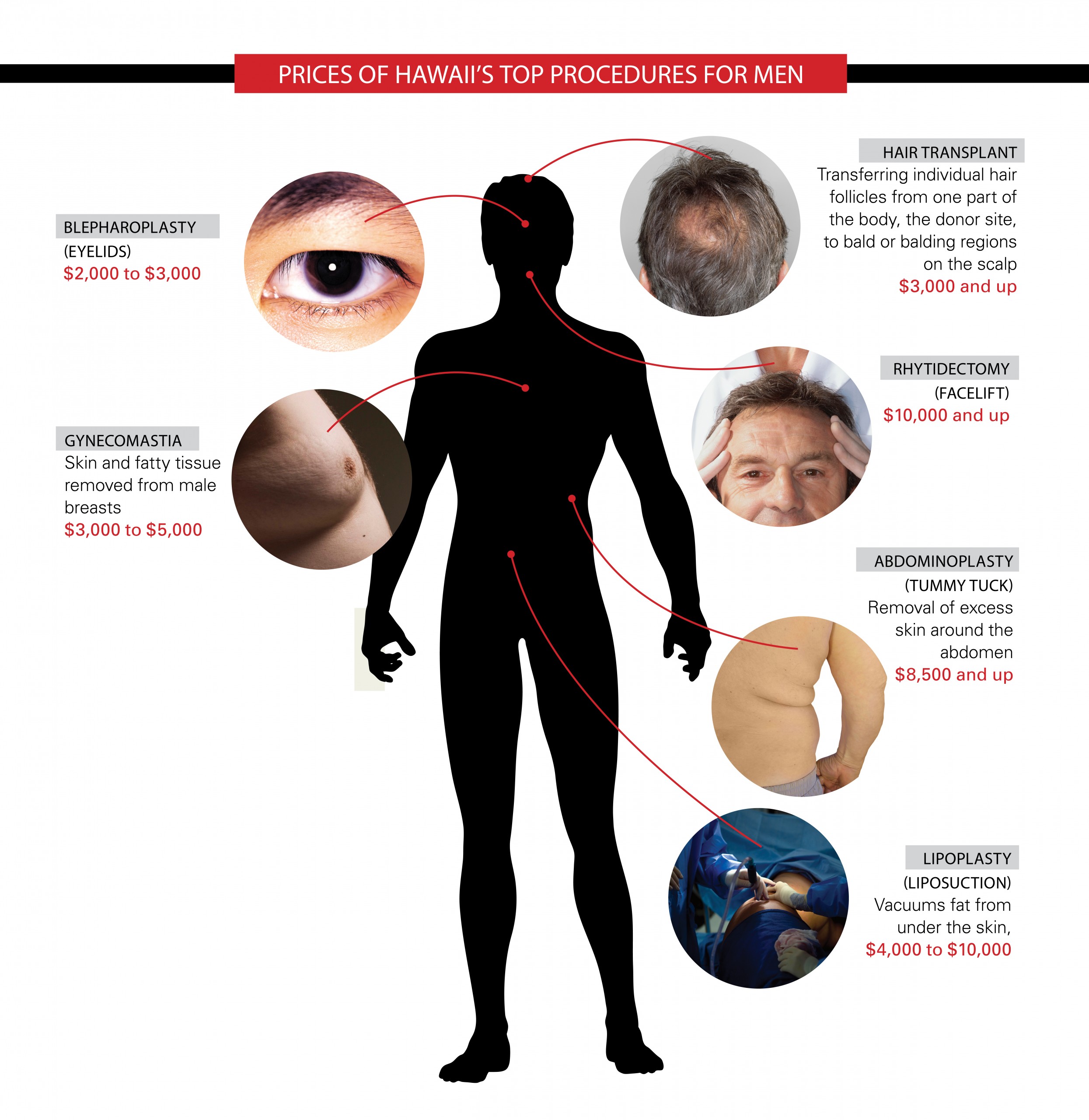 Most Popular Nonsurgical Treatments in Hawaii Include:

Botox A drug injected into the face, relaxing the muscles to reduce wrinkles 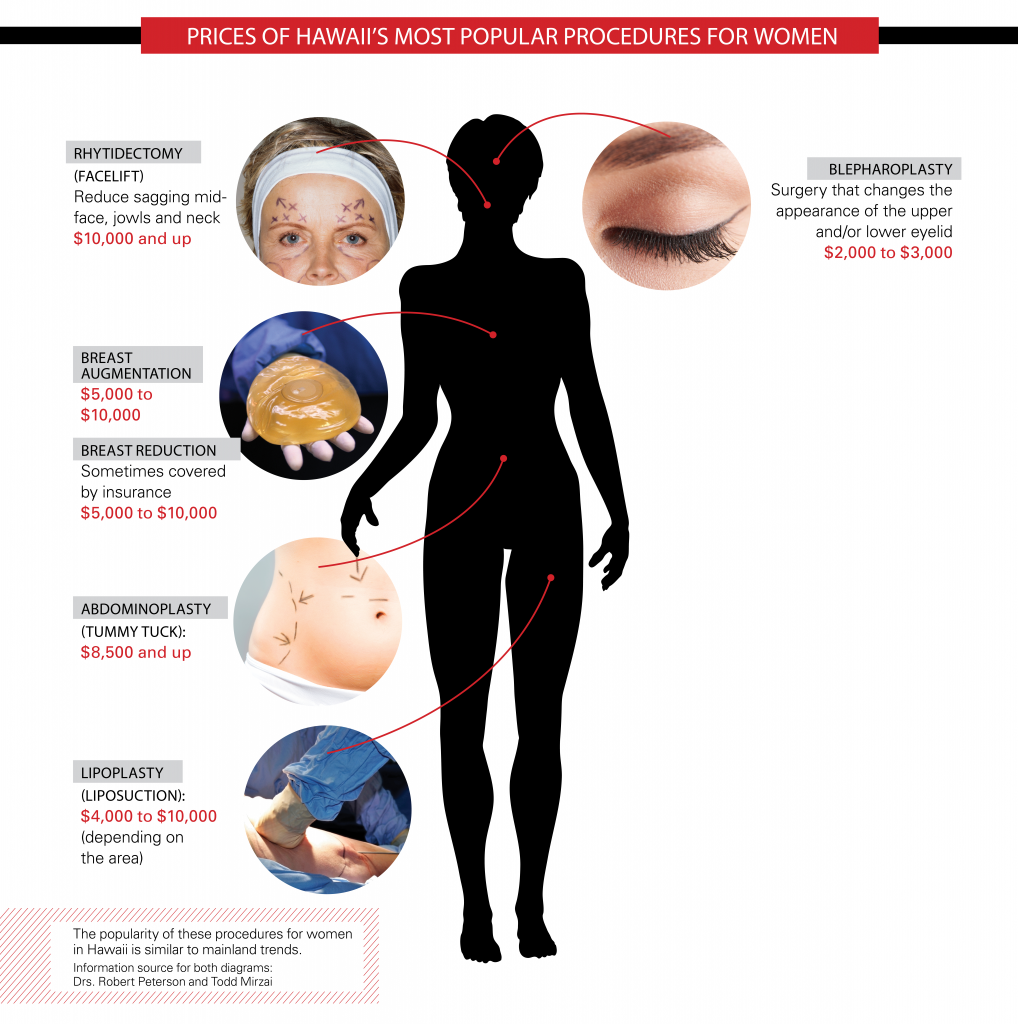 Lip implants: Soft implants can be molded and shaped to specific lip measurements and can replace collagen implants. If problems occur later, the implants can be removed, whereas chemical injections cannot.

Fat Transfers: Instead of using synthetic materials for breast implants, surgeons can graft fat from elsewhere in the body. Mirzai says he has learned that a body’s response to foreign material is often unpredictable; using body fat results in minimal incision and reduces the chances of scarring, yet the fat can be shaped and sculpted like other synthetic implants.

Mommy Makeovers: A series of procedures that may combine a tummy tuck with a breast augmentation and possibly a breast lift. Mirzai says these are becoming more popular with women who have given birth, even though the procedures can cost $20,000 or more.

In the U.S., 48 percent of all cosmetic surgeries are performed on 40- to 54-year-olds. Here’s how that segment breaks down:

Cosmetic tattooing, also known as micro pigmentation, involves implanting pigments as eyeliner and eyebrows, for a permanent look of makeup.

“We do see a broad range of ladies, from business women to mothers. They just don’t have time for makeup but they want to have that feature,” says Peggy Sucher, cosmetic tattoo artist at Tattoo Hawaii, who has been in the body-art industry for more than 25 years and is a board member for the National Tattoo Association.

Sucher says the following procedures are requested most often and provides their average prices. Most require touchups from time to time.

Eyeliner: The most popular procedure in Hawaii. Cost: $150.

Eyebrow: Aside from the time needed to pencil in eyebrows, getting eyebrows to match so they look natural is a challenge. Cost: $150.

Beauty mark: A euphemism for a dark facial mole, imitating famous women such as Marilyn Monroe and Cindy Crawford, this is the simplest procedure. Cost: $50.

Blush and eye shadow: Often requested but not recommended by many cosmetic tattoo artists. “When eye-shadow tattooing is attempted, the pigments are known to travel through the fatty tissue of the skin and end up along the cheek area,” Sucher says.

Erasing remnants of your past

Your life can change, but, unfortunately, your tattoos don’t. When things that were once important to you no longer are, tattoo removal can help.

Dr. Gregory Caputy is a fellow of the American Board of Laser and Plastic Surgery and a dermatologist specializing in tattoo removal at the Aesthetica Plastic and Laser Surgery Center in Honolulu. Caputy has 600 patients currently undergoing the tattoo removal process and, over the years, has served almost 3,500 tattoo-removal patients.

“Tattoo removal is not a one-time thing,” he says. “Several treatments are involved and a period of four to eight weeks between each treatment is required. Professional tattoos that are dense can take up to 10 treatments to remove.”

At the Aesthetica Center, pricing is straightforward. Caputy charges $50 for the body and $100 for the neck and face, for every square inch of ink removed per treatment.

The most effective removal method uses lasers, which break down the pigment underneath the skin. When lasers aren’t enough, resurfacing is used to remove layers of skin to get the pigments out.

Tattoo removal treatments are painful – some say it feels like a rubber band snapping your skin – but is not time intensive. “To treat a square inch would take no longer than five minutes,” Caputy says.

He also offers tattoo removal to ex-gang members whose tattoos associate them with gangs or drugs. “If they are trying to get jobs and turn their life around, and someone sees tattoos everywhere, they are less likely to get hired,” Caputy says. Working with T.J. Mahoney and Associates, a treatment program for recovering addicts and ex-cons, Caputy often removes the tattoos without charge during people’s rehabilitation processes.

Tattoo removal rarely results in scarring, but skin color can change during treatment, because lasers cannot distinguish between melanin and tattoo ink.

“The darker the skin, the more likely that skin pigments will get damaged,” Caputy says. “Sometimes tattoo removal can result in lightening of the skin. The more dense tattoos almost always leave traces that something was there.”

The business of cosmetic dentis-try has grown along with all the new technologies available to enhance a person’s smile or reshape their teeth, says Ken Yasuhara, an aesthetic and restorative cosmetic dentist.

Yasuhara, named one of Honolulu’s top dentists by Honolulu magazine last year, says technology has made just about any size and shape of teeth possible.

To find out which are Hawaii’s most popular cosmetic dental procedures, we talked with Yasuhara and Wilfred Miyasaki, a cosmetic dentist at A Downtown Dental Group in Honolulu and the Hawaii director of the Smiles for Life Foundation, which raises money for ill, disabled and underprivileged children.

Veneers: The most popular procedure for tooth enhancement is a veneer, a thin layer of porcelain bonded to the front of the tooth and wrapped around the edges. Veneers can be shaped to any desired look and last up to 20 years. Cost: $800 to $1,200 a tooth.

Teeth Whitening: Miyasaki offers two methods: a take-home tray system patients use on their own that shows results in one to two weeks, and in-house treatment with a whitening laser, which produces instant results. Cost: Starting at under $100 for the take-home treatment and about $500 for the laser.

Teeth straightening: Newer methods have replaced traditional metal braces for some people. Cost: Either method can cost between $2,900 and $6,000.