WATG Dazzles the World for 70 Years 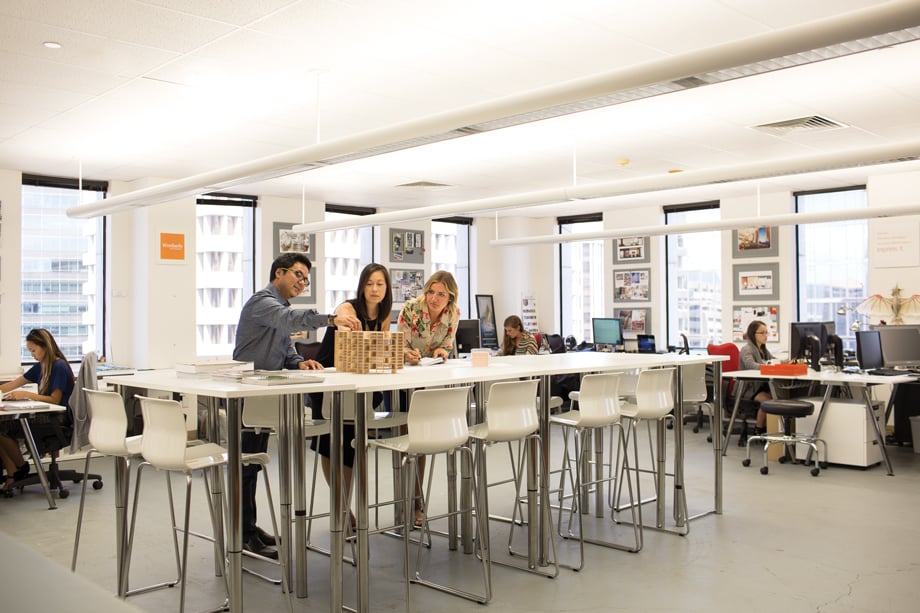 THE LOCALLY FOUNDED FIRM’S first hotel project was the renovation of the Royal Hawaiian in 1945. Today, the worldwide company has expanded beyond resorts into mixed-use projects that include retail complexes, offices, casinos and residences spread across 160 countries.

In Oman, a shimmering metallic mesh will form the outer skin of the new 25-story headquarters for the country’s telecommunications giant, its rippled surface suggesting constant movement to simulate ever-changing technology. 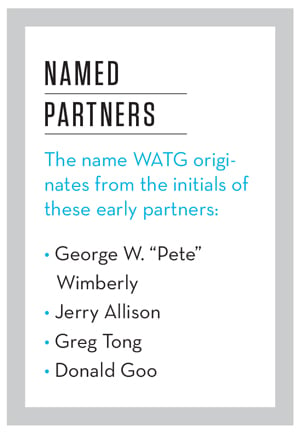 In China, at the historic riverfront and delta wetlands where Hong Kong, Macau, Guangzhou and Shenzhen intersect, the glittering Zhuhai ShiRong Le Meridien resort and residences will soon emerge with villas, shops and restaurants, plus a bridge to both Macau and Hong Kong.

Each is very different, but they share the grand spaces, warm atmosphere and cutting-edge design that are hallmarks of a Honolulu architectural firm which began humbly as World War II ended. 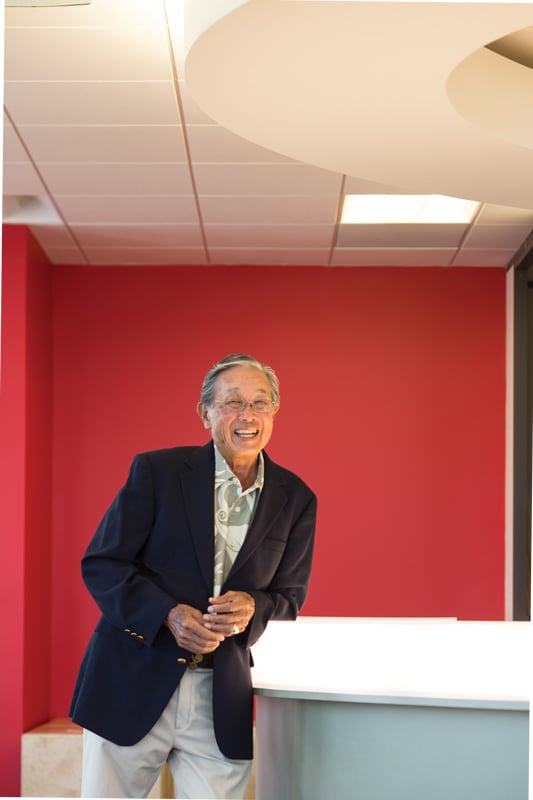 Donald Goo, one of the early partners whose name helped form the company’s initials, still has personal clients at age 81. Photo: Olivier Koning

For 70 years, Wimberly Allison Tong & Goo – now simply WATG – has been exporting Hawaii design expertise around the globe, and redefining how international travelers enjoy themselves in 360 hotels in 160 countries.

As befits its Hawaii roots, the WATG trademark for decades was a resort in a beautiful, idyllic location. But the firm always knew it was never about re-creating Hawaii elsewhere.

“Renovating the Royal Hawaiian in 1945-6 “started our niche of doing hotels,”

“In many cases, we’ve gotten commissions because of our understanding of hospitality in general,” says Craig Takahata, Honolulu managing director and WATG VP. “We understand the value of oceanfront and ocean views, of sunsets and sunrises. All those different aspects of siting your building and taking advantage of things like trade winds. We take those resort principles and apply them to other places.”

As Hawaii’s exports of sugar and pineapple declined over the past half-century, a unique export grew: Our architectural expertise in creating a welcoming “sense of place” for travelers, shoppers and others. WATG led those exports.

“What Hawaii does is highlight cultures and take that international approach overseas,” says Takahata. “We try to appreciate that as much as we can, and offer it to our clients.”

Today, WATG is headquartered in Irvine, California, and the Honolulu office is just one of eight locations with 352 employees worldwide. But the 45 people in the local office are responsible for projects in such far-flung places as Mumbai, India, Kuala Lumpur, Malaysia, and Paradise Island in the Bahamas, as well as the three megaprojects cited at the start of this article. WATG has grown beyond just glamorous hotels and resorts, into also creating giant multi-use retail and convention centers, glittering business complexes and luxurious homes.

“The spaces that they build look like they belong there,” says UH professor Thomas Bingham, interim dean of the School of Travel Industry Management and former dean of the School of Architecture. “It’s not like many places where you go where the building looks like Scotty beamed it in and it could sit anywhere and be from anyplace. The spaces they build look like they belong. They take advantage of the landscape and the environment around them. They’re culturally sensitive and reflect the surrounding culture, so when you go into them you feel as if you’re part of that place, and experiencing something authentic.

“They’ve also had a hand in many of our most iconic buildings that people from everywhere associate with Hawaii,” adds Bingham.

That includes Oahu’s largest resort, the Hilton Hawaiian Village, as well as the Hawaii Convention Center, not to mention The Fairmont Orchid on the Kohala Coast of the Big Island, the Hyatt Regency Waikiki Resort & Spa, the Ocean Villas at Turtle Bay, the Grand Hyatt Kauai Resort & Spa, and many more.

Donald Goo, one of the early partners, says WATG has made such a huge mark that it is recognized as “the No. 1 hospitality design firm in the world.” Furthermore, hundreds of individuals who passed through the firm are now making their marks working for developers, hotels and other companies around the world. “Wow, that’s a legacy,” Goo says.

“Basically when we started out in hospitality, that was at the beginning of tourism,” says Goo. “We were innovating because we didn’t know how to follow anyone else, because there was no one else in front of us! When I went to Tahiti later, I saw all the buildings we did earlier. Afterward, there were all the copycats.”

Now 81, Goo spent his entire career at the firm and still has personal clients. One of his last projects was creating a master plan for the Grand Waikikian Suites timeshare tower on the narrow strip where the Waikikian Hotel once sat. “Hilton bought the property and I did the plan to integrate that property with the rest of the 20 acres of the Hilton Hawaiian Village,” says Goo.

“EA lot of this design consciousness is about social media, about taking selfies in cool places!” 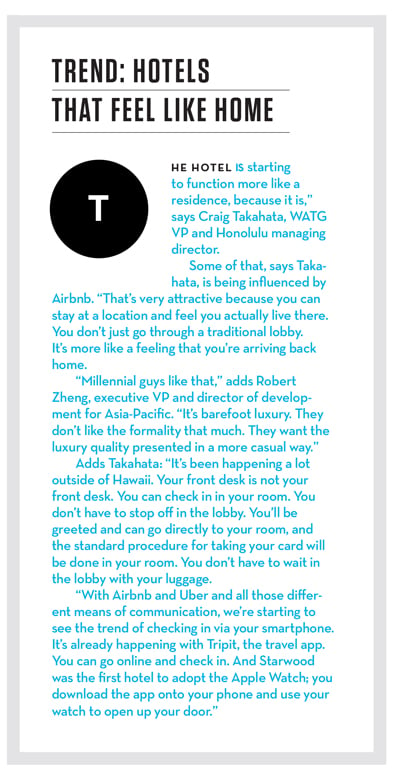 Today, WATG continues to expand beyond architecture, now branching into landscape and interior design so it can offer customers the whole design package.

“Interiors work on touch and feel. It’s a whole different feel than what architects have,” explains senior planner and landscape architect Michael Brown, running his hands across a rich display of cream and earth-toned swatches laid out on a central table in the firm’s 18th-floor downtown offices in the Topa Financial Center.

“The green part of a landscape has a structure, too,” Brown says. “It needs a maintenance plan, shade, a progression of planning such as, ‘How do you light it at night?’ You can ‘moonlight it,’ or hide lights in hidden places creating shadow patterns. That realm now is so specialized. Just consider pools and water features. Even if a pool isn’t open at night, it needs to glow so the light will impact the trees around it.”

WATG’s designs were always ahead of their times. Remember the bungalows hanging out over the water in Bora Bora, circa 1961? Even then, WATG says, it was using sustainable design – well before it became the buzzword for environmental excellence. The company has long incorporated natural breezes and native building materials to save money; today, sourcing materials locally is the trend, but it’s vintage WATG. 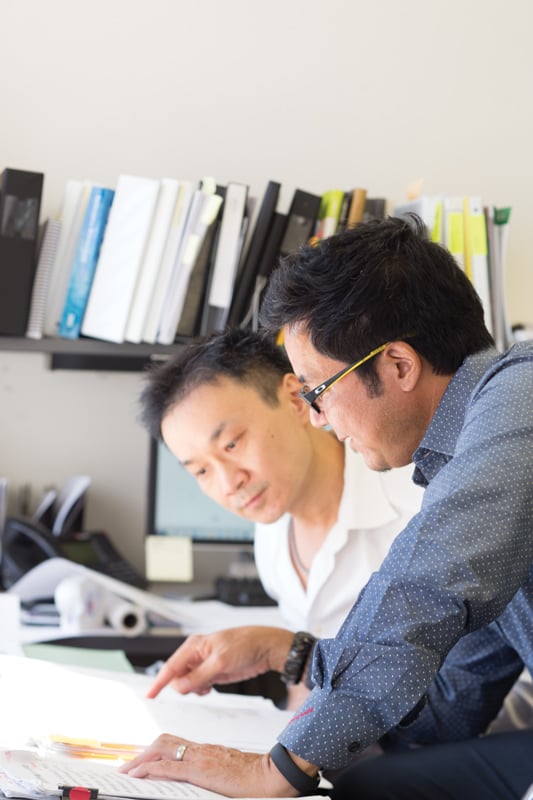 More recently, consider the Rangali Island villas balanced on stilts above a blue lagoon in the Maldives. The outdoor balconies have whirlpools; the living room floors are glass to view sea life below; and the sundecks are cantilevered over the water.

Long before those projects, the firm’s first memorable Hawaii moment was renovating the Royal Hawaiian Hotel in 1945, the year the firm was founded by designer George W. “Pete” Wimberly and project manager Howard Cook – hence its original name, Wimberly and Cook.

“It was the Royal that started our niche of doing hotels,” says Robert Zheng, executive VP and director of development for Asia-Pacific.  “During the war, the military had converted the Royal to a military hotel. There was barbed wire on the beaches and barricades, and part of the hotel was an officer’s club. Then, when the war was over, they converted it back and that’s what you see today.”

Barely five years into their partnership, Wimberly was already eyeing growth beyond Hawaii. “You can see how visionary Pete was,” says Zheng. “From the business perspective, in order to diversify, you need to go outside of Hawaii. He said, ‘Wherever they fly to, there’s got to be a need for hotels.’ That thinking helped him map out the first overseas Hawaii plan.

“Even if a pool isn’t open at night, it needs to glow so that the light will impact the trees around it.”

“So he contacted Pan Am and talked to the executives and went along with them as they were adding routes, and that’s how he got commissions (to build hotels) in French Polynesia, American Samoa, Fiji.”

Today, 3-D computer modeling adds to the precision and possibilities.

“You can do a ‘shadow study,’ ” says Dean Kawamura, corporate marketing services manager. “You can track the sun and see how it affects the building throughout the day. You don’t want the shade covering your pool during the middle of your day. And you can do summer and winter solstice tracking of the sun in a specific location. Through technology, it becomes a lot more scientific, and also measures the impact of solar-heat gain on the building.”

“What we learn internationally,” adds Takahata, “we’re coming back and doing in the Hawaii market, so it becomes more worldly as well as accommodating different markets.

“We take what we learn overseas and make it happen here to understand the international traveler.”

“We take what we learn overseas and make it happen here to understand the international traveler.

“We know their profiles, their lifestyles, so we could design for them. Here we know Asian travelers and their attraction for Hawaiian buildings. For instance, they love large lanai so we incorporate that into the design.  And southern exposure, that’s a big one. Plus their expectations of amenities and guest room size.”

Kawamura says even the size of bathrooms has changed dramatically over the last decade. “Especially now, in the high-end properties, 40 percent of the room size is the bathroom.”

Adds Zheng: “In some high-luxury projects you won’t be surprised to see some of the bathrooms with views and in-room spas, and they may take up half of the room area. That’s not common, but some projects ask us to do that.”

Hotels have a 40-year lifespan, Zheng says. That means many of Waikiki’s finest need facelifts, perhaps tummy tucks. In fact, many of the early hotels the company designed have already been torn down.

“The facilities are behind the curve,” he continues. “What is the latest hotel we have? Trump! The other hotels are easily 30 years already. You can see the cycle. We’ve reached the point of needing major renovations of current facilities to bring new products into Waikiki. You look at the visitors’ profile, compared to 10, 20 years ago, and it’s a different generation – the Millennials, the X and Y generations –and our products need to be responsive to the changing profile of our guests.” 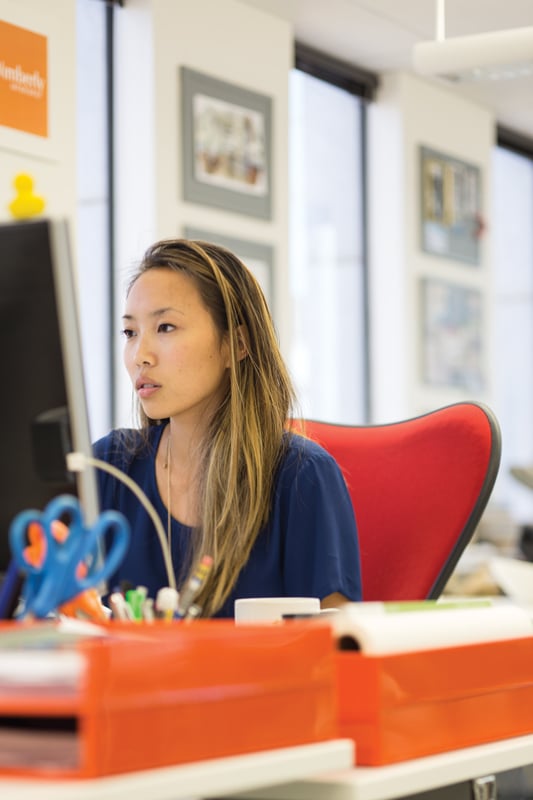 Though the youthful market doesn’t yet have the financial wherewithal of Boomers, their influence is deeply felt, Takahata says. So, even with 70 years of experience, WATG’s principals say they are always learning and evolving. For instance, social media require lobbies to be comfortable sitting rooms with Wi-Fi in the daytime or offer space for an informal meal, and then become something completely different at night.

“Those things – like a place to dance and mingle – seem to be a lot more appealing to the younger generation,” he says. “So hotels have dual-functioning areas that provide amenities while allowing interaction to happen. Their lobbies aren’t traditional lobbies, but spaces to be converted into a nightclub at night.”

“A lot of this design consciousness is about social media, about taking selfies in cool places!”