PHOTOS BY ELYSE AND MATT MALLAMS

Back in the mid-1970s, when Abner Undan started working for a tree-trimming company, the standard method was to lop off branches randomly and use spikes to climb palm trees.

“Those were the old ways. We just didn’t know … and now the industry has really evolved,” says Undan, a certified arborist and president of Trees of Hawaii, a company that maintains trees and removes defective or structurally compromised ones.

The industry is far more regulated, organized and scientific than before. Many workers are trained arborists, most are certified to climb trees and just about everyone in the business knows that topping trees isn’t effective.

“Initially, it was a pretty wild business, mainly people with pickup trucks, cane knives, chainsaws and a pair of spikes,” says Steve Nimz. “They’d just go out there and cut whatever the customer told them to cut. There was nothing in the way of safety back then, and there were no rules or regulations. No one really had an idea of what arboriculture was about.”

Nimz has been in the business for 40 years and has seen all the changes first hand. He’s a certified arborist and owner of Steve Nimz & Associates, a Honolulu-based consulting arborist service. 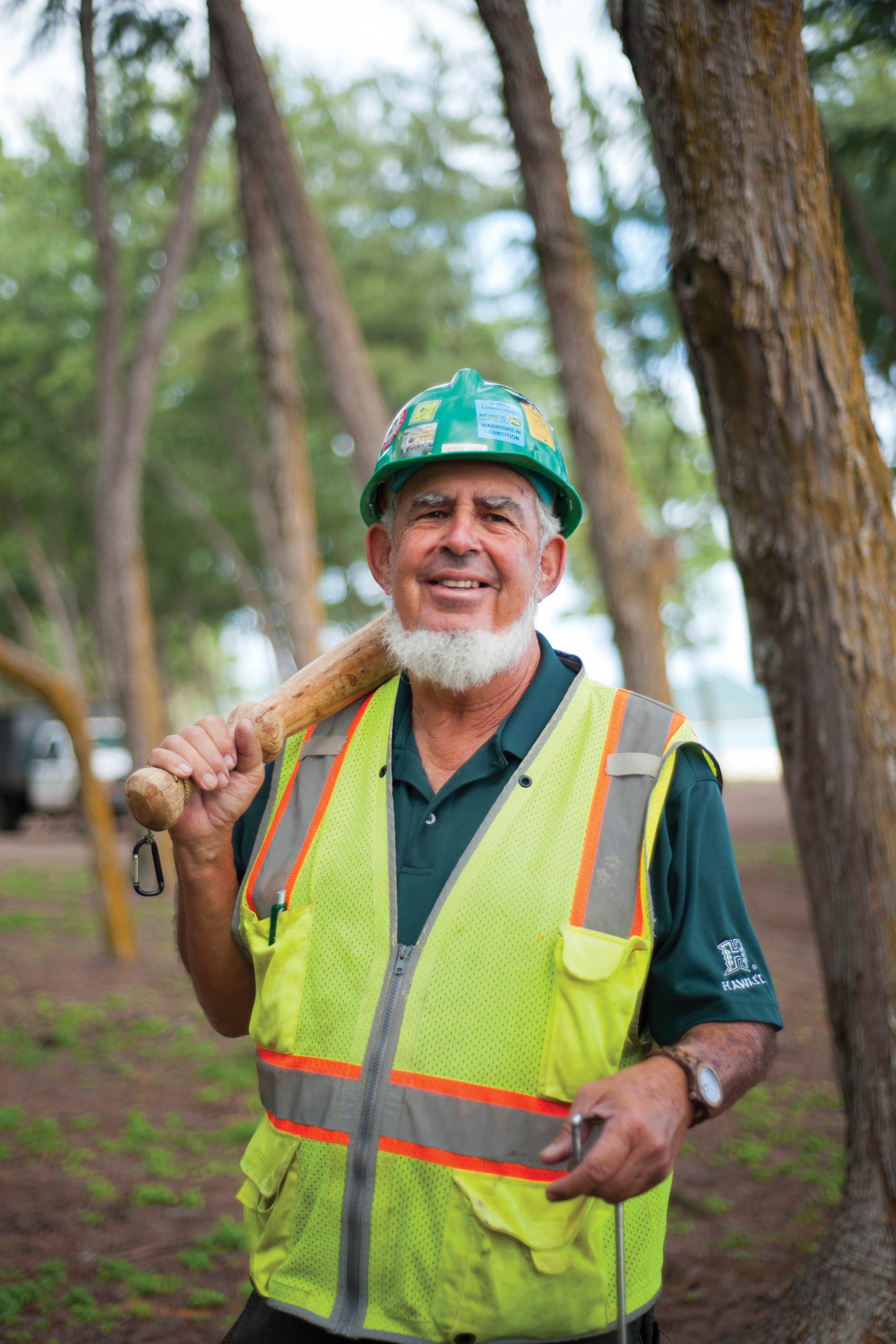 Steve Nimz has seen a lot of changes during his 40 years in the tree-trimming business. Today, he uses modern tools to understand a tree’s health and the best ways to help it.

Arboriculture, the cultivation and management of trees and shrubs, wasn’t part of the industry’s vernacular at first. But, about 30 years ago, tree trimming and landscaping companies started looking seriously at certifications and credentials for their workers, primarily to snag government contracts that required them. The industry is now regulated by the federal Occupational Safety and Health

Administration, which sets standards for tree care similar to those in other contractor work. The American National Standards Institute also offers specific safety requirements for arboriculture – ANSI Z133 – that address everything from use of portable hand-powered tools to electrical hazards. Many companies follow these rules, but they are rarely enforced.

At a minimum, tree-trimming companies need to have general liability insurance and workers’ compensation insurance, plus a general contractor’s license. However, some people still hire unlicensed tree trimmers.

“If you’re going to hire a general contactor, you should hire them because of their merit and qualification. That’s the same in this industry,” says Steve Connolly, president of the Aloha Arborist Association, an organization of tree-care professionals focusing on education and training. “What you demand from an electrician or a roofer you should demand from (a tree trimmer).

“A guy could knock on your door and charge you $25 to cut your mango tree, but he has no proper training or equipment,” Connolly says. “That’s the really dangerous part. You get what you pay for.”

The International Society of Arboriculture started its certification program in 1992. Since then, more than 25,000 people around the world have earned one or more of the six credentials it offers, including certified tree worker climber specialist and certified arborist.

Certification may be a requirement for some jobs, but it is not required to operate a tree-trimming business.

That means there are still untrained guys cutting down trees all around Hawaii.

“It’s been a challenge, but I think we’ve built up our industry’s reputation and people are using words like ‘certified arborist’ as our industry grows,” Nimz says. “Before, it was just a bunch of guys in T-shirts with a pair of spikes and six-packs of beer in their trucks calling themselves tree trimmers. Now, we’ve got nice equipment, logos on the trucks, aerial lifts and we’re following safety requirements.” 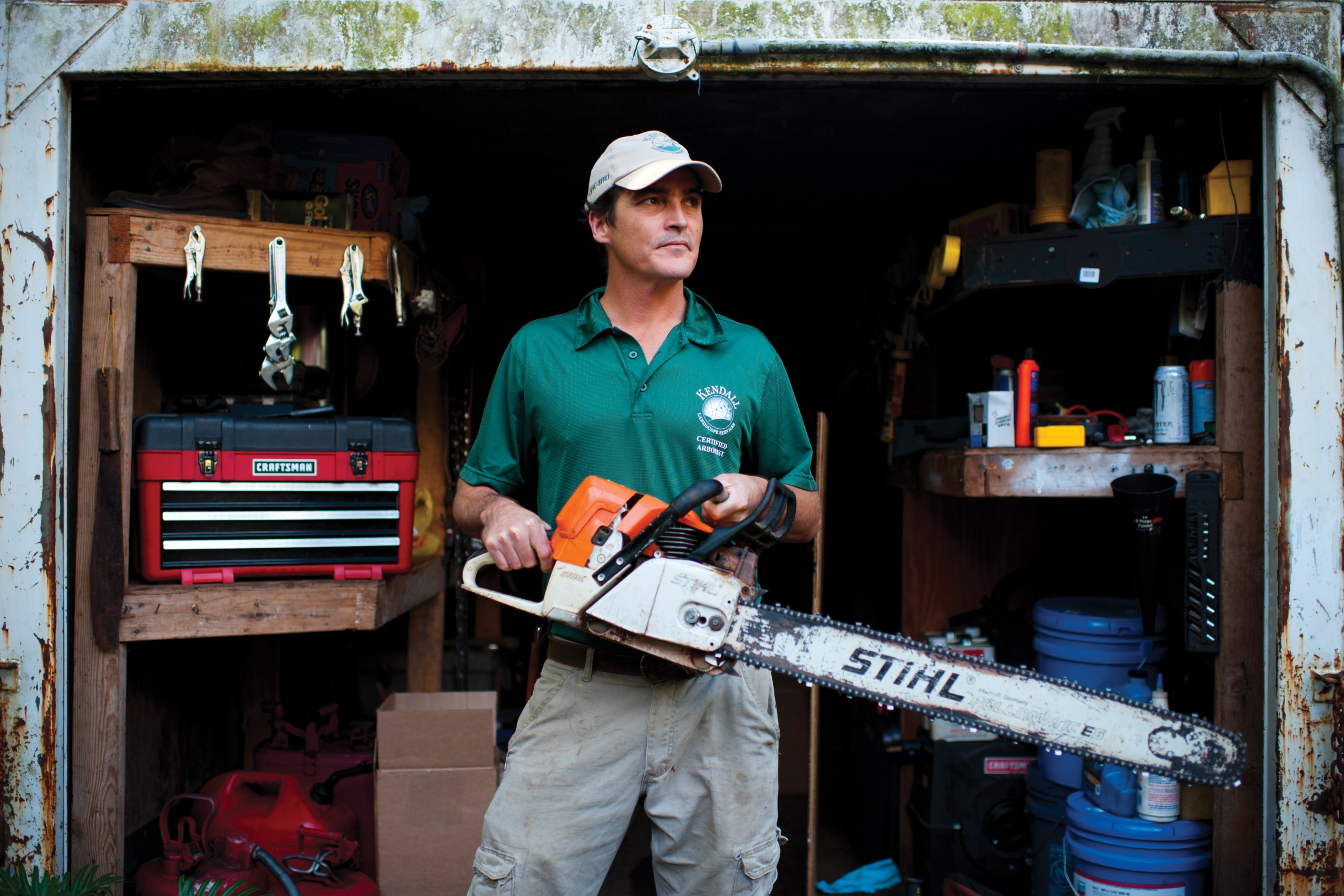 Andrew Kendall says the business can be dangerous. “If you’re 50 feet up in a coconut tree and the whole thing fails on you… you’re going with it.”

Each Tree Is Different

Undan started working as a tree trimmer in 1976, when he joined Trees of Hawaii. He left for five years to work for the city as a tree trimmer and inspector, then returned to the company and took it over in 1990. Today, it’s one of the largest tree-trimming operations in Hawaii, with offices on Oahu and Maui and more than 45 workers, some of them certified arborists and all of them trained to properly prune trees.

His crews were trimming trees in Royal Kunia on a hot Wednesday afternoon, pruning Hong Kong orchid trees and a few palms as part of the company’s contract with the Royal Kunia Community Association. The workers, all wearing safety vests, hard hats and protective eye gear, were deftly removing branches and tidying open areas. Undan stood on the side with this reporter and explained the subtle differences among the trees, how the ideal frequency to prune a tree depends on its species, and why coconut palms are so dangerous.

For example, shower trees need to be pruned twice a year, but royal palms are trimmed every four months.

He says his company is the only one to touch the world-famous, century-old Hitachi monkeypod tree owned by the Japanese electronics company, which pays Moanalua Gardens $400,000 a year to use it in Hitachi advertising.

“It’s the largest tree there,” says Undan, who adds that monkeypods are his favorite trees because of their size and symmetry. “That tree is 200 feet across. I measured that nine years ago.”

Nimz is also mesmerized by the almighty monkeypod, with its wide canopy and dense foliage. Many grow to 80 feet tall. 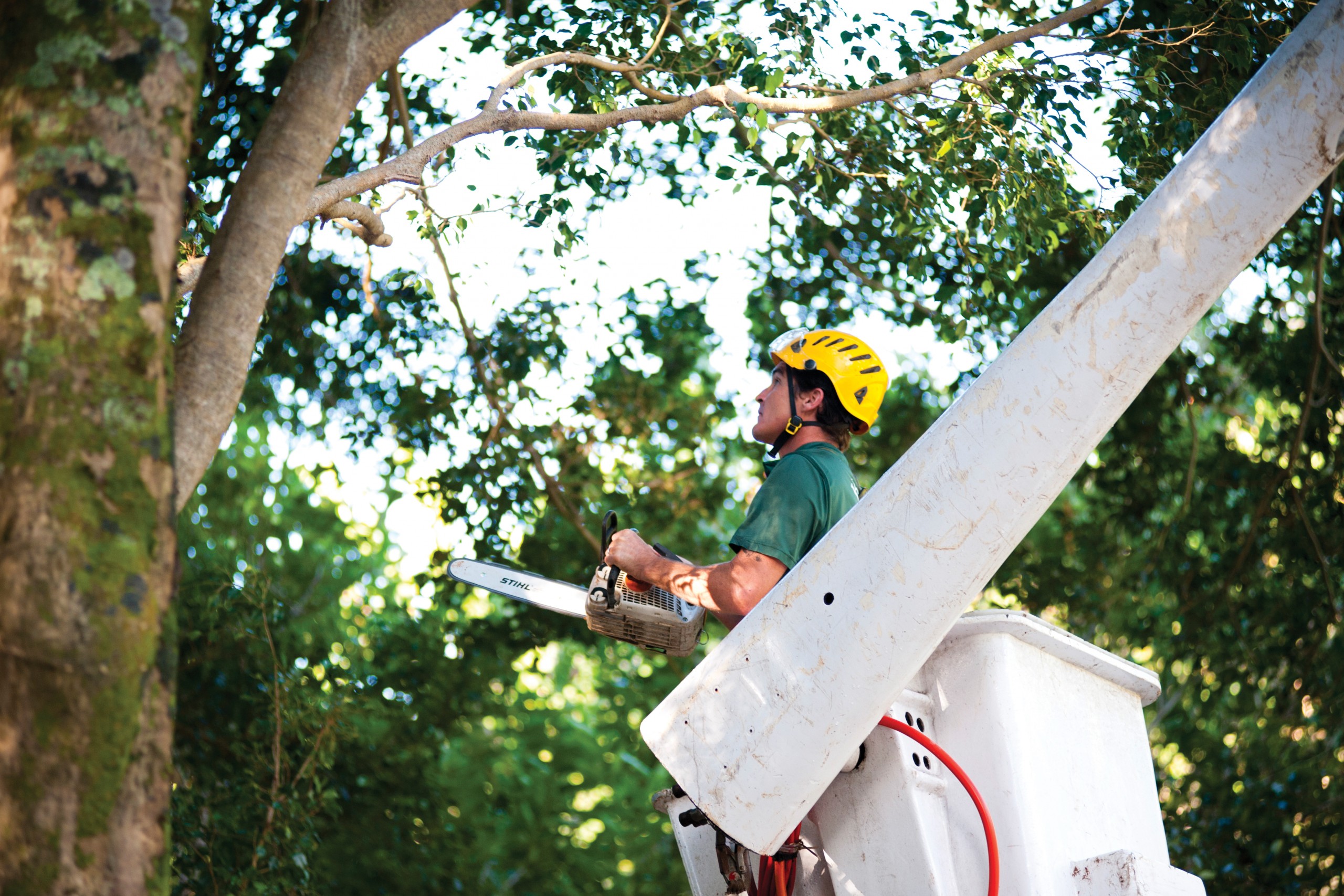 “You can climb up and walk on the long branches,” Nimz says. “It’s really pretty neat.”

Coconut trees are the least favorite of most tree workers. They’re messy, dangerous and ubiquitous.

“You’d be amazed at what you’d find up in a coconut tree,” Nimz says, laughing. “Earwigs, roaches, rats – everything in the world lives up there. They’re terrible.”

Which is why experienced tree workers climb to the very top of the palm and stand up above the trees to prune leaves, he says. “The inexperienced climbers will start cutting from the bottom and see rats jumping out at them,” he says. “You’ll get centipedes jumping on you, tons of ants and cockroaches.”

Coconut trees aren’t Undan’s favorites either, but he does fondly recall one along Ala Wai Boulevard. He had just started as a trimmer with the city and was assigned to trim the palms lining the canal. There was a tall one, about 60 feet high, and leaning to one side. “No one wanted to climb it,” he says.

When he got up to the top, he felt around and found a bird’s nest. Lining it was a $20 bill.

“Oh, yeah, I took the money,” he says, laughing. “That was my reward for climbing the palm!” 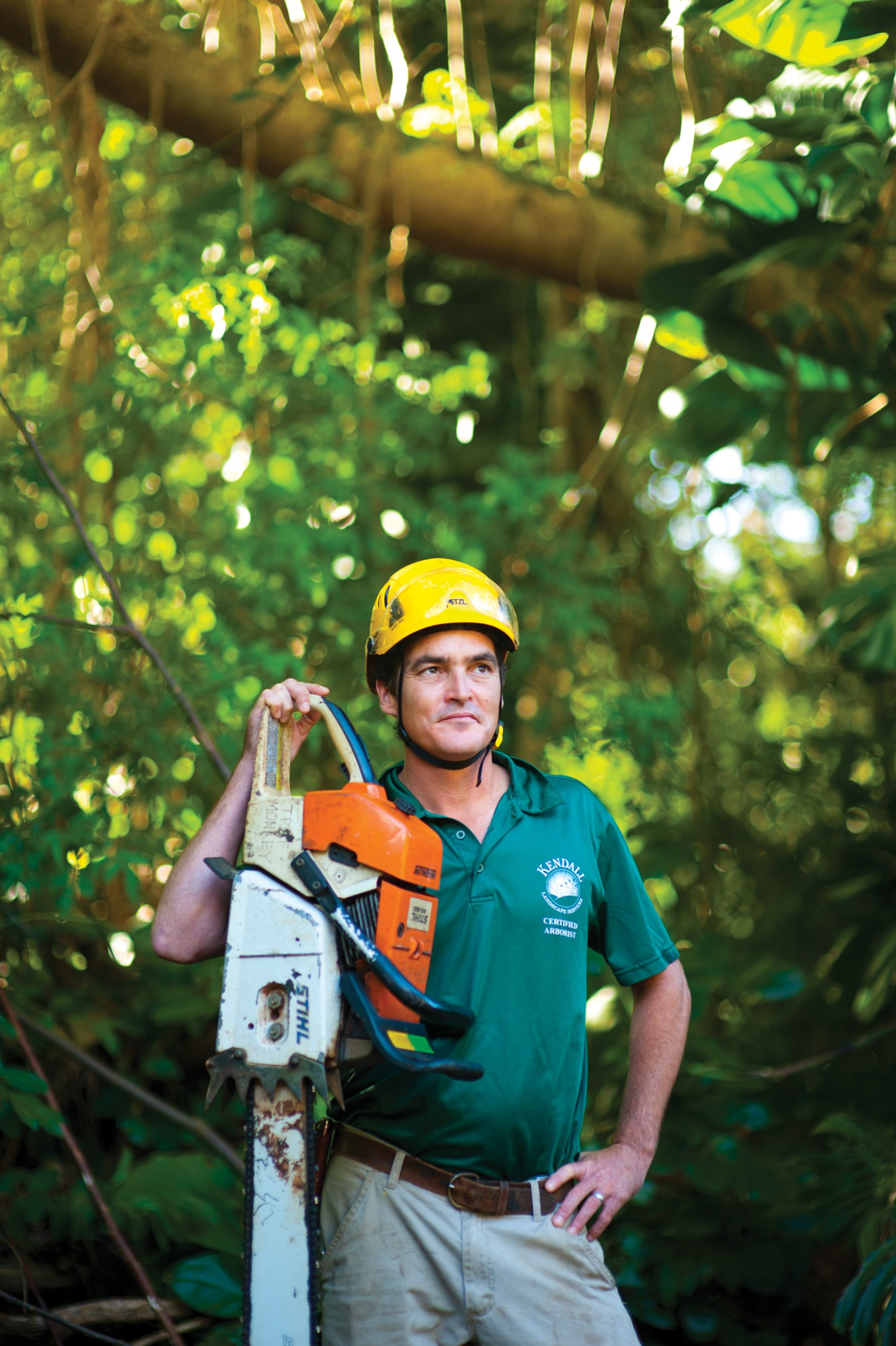 The challenge with tree trimming is every guy with a chainsaw thinks he can do it. Truth is the job is tougher and more dangerous than people think.

“If you just think about someone climbing up a 100-foot tree with a chainsaw in his hand, it doesn’t take much to see how dangerous this job can be,” Nimz says. “It takes a special kind of person who’s going to do that.”

Many companies today put workers in aerial lifts to trim high trees, but climbing is often unavoidable, and that’s when serious and fatal injuries can occur.

“Some people don’t fully understand what goes into doing it or what level of skills people have to have in order to do it,” says Andrew Kendall, certified arborist, tree-risk assessor and owner of Kendall Landscape Services based in Palolo. “If you’re 50 feet up in a coconut tree and the whole thing fails on you, that’s it. There’s nowhere to go. You’re going with it.”

There have been several tree-related fatalities in Hawaii during the last few years, say industry experts, some of which involved trimming coconut trees. But there are plenty of other dangers, including equipment such as chippers, chainsaws and aerial lifts. Proper trimming has reduced accidents, but insurance costs remain high.

Kendall knows a lot about the different trees that grow in Hawaii, from mango trees to the enormous and fast-growing albizia trees that grow along H2 toward Mililani. You have to know your trees before you even attempt to trim them, he says, and that challenge is part of his attraction to the business.

“Everything here is always changing and the trees grow fast, so there’s always something new,” he says. “There are so many different tree species, so many things you can learn. It’s a lot of fun.”