“Downtown” Jamie Brown, a CRE All-Star and president of Hawaii Commercial Real Estate, looks puzzled by the question. “Have you ever seen a commercial real estate contract?” he asks. Fishing out a thick binder, he opens it at random and pulls out the paperwork on a recent deal. “This is what, 40 pages,” he says, thumbing through the contract. “And that’s not counting all the addenda and the appendices in the back.” More to the point, unlike a residential contract, which is mostly boilerplate, almost every provision has been negotiated and customized for this deal.

For the commercial broker, this fact has tremendous implications. If no two properties and no two deals are alike, it’s impossible to categorize them, so there is no practical Multiple Listing Service for commercial properties. MLS is the great leveler among residential agents. They use the MLS as their main distribution and marketing tool; it’s a partial substitute for market knowledge. On the commercial side, market knowledge is a function of shoe leather, and all brokers earn it on their own. That’s why, although there are a variety of personalities and backgrounds among the top commercial brokers, they all share a few qualities.

The core competency of any commercial broker is the cold call. “Cold calling is a part of our business that’s absolutely essential, no matter what part of your career you’re in,” says Ron Ward, a vice president at Colliers Monroe Friedlander. “The more people you talk to, the more business you get.” And he doesn’t mean on the telephone. Like nearly half the members of this year’s CRE All-Stars, Ward is a disciple of Andy Friedlander, the sometimes controversial, always influential principal broker at Colliers Monroe Friedlander. “We don’t do anything over the phone,” Ward says. “That’s one of Andy’s tenets: you don’t build relationships over the phone. You’ve got to go out there and talk to them. And you’ve got to talk to them more than once.”

Most successful brokers cold call on foot. They walk a neighborhood, looking for vacancies, talking to people, learning the buildings. Ward, who specializes in industrial properties, says, “You tell yourself, ‘Today, I’m going to Halawa Business Park and I’m going to start taking notes and walking around.’ You want to find out what’s available. You’ve got to know the areas; that’s very important.” It takes enormous discipline to deal with the fear and rejection, but this is how successful brokers learn the market and find clients.

It’s axiomatic that real estate is a relationship-based business; but most of those relationships begin with a cold call. Ward, for example, was a successful businessman in Hawaii before joining Colliers Monroe Friedlander eight years ago. “I came into Andy’s office with five pages of contacts,” he says. “And Andy looked at them and said, ‘That’s great, but none of your business is going to come from this list.’ It absolutely floored me. But every transaction in the first two years of my business came from people I had cold called.”

Top brokers are not only more disciplined about cold calling and prospecting, they’re more sophisticated at it. Joe Haas, senior managing director at CB Ellis, points out that when young agents find a property to sell, they often look far and wide for buyers. “But senior guys would look closer to home,” Haas says. “There’s an old saying in this business: ‘If you go up on the roof and look around, you can see the buyer.’ Generally speaking, the guy next door buys it.” Top producers are not only great at gathering market knowledge, they know how to put it to work. “That’s how experienced agents focus their canvassing to likely buyers.”

“Cold calling is a part of our business that’s absolutely essential, no matter what part of your career you’re in.”

Part of that is integrating their market knowledge into the business plans of their clients. On the residential side, where the client is usually an individual consumer, real estate decisions are mostly emotional. The commercial client, though, is normally a business, and the decisions that go into the typical commercial transaction have more to do with the bottom line. Mark Ambard, an industrial specialist and one of the dwindling number of one-man shops in commercial real estate, points out that a good broker needs to understand both real estate and his client’s business. His own practice offers an excellent illustration.

“There’s an old saying in this business: ‘If you go up on the roof and look around, you can see the buyer.’ ”

“There are so many moving parts to industrial,” Ambard says. “You’ve got to know your ceiling heights. You’ve got to know your sprinkler capacity. If someone wants to store tires, you’ve got to know you need three times the sprinkler capacity than if you want to distribute widgets. You’ve got to understand your asphalt has to be at least five inches thick, because if a container drops, it’s going to sink down into it. You need to understand your basic container, with fully inflated tires, is 13 feet six inches off the ground, so you need a 14-foot door to bring that thing inside. You need to know that your racking system can go four-high in a 20-foot building, five-high in a 24-foot building. How many amps do I need to charge a forklift? If I have a propane forklift in the back of a warehouse, do I have enough ventilation so that the propane, which makes carbon dioxide as a by-product of combustion, doesn’t kill the forklift operator … ”

This is the kind of expertise that a top commercial broker offers — a detailed matching of what’s available with what the client needs. “It’s very much like the old card game, Concentration,” Ambard says. “Here’s a queen of hearts; I think I remember a queen of diamonds over there.” 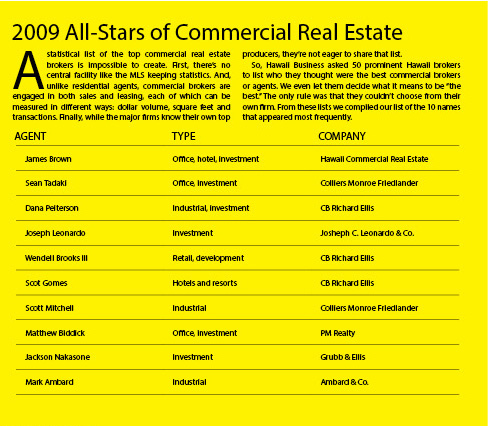 It can take years of experience and cold calling to gain this kind of market knowledge; but that’s just the beginning. Completing transactions — getting to the end of those convoluted contracts — calls for other skills. “The first word that comes to mind is perseverance,” says Brown. “Our sales cycle is extremely long. From the time we identify a company that has a requirement, until we’re able to sell or lease something, the shortest you ever see is two months. Typically, I want to say it’s closer to six months. That’s an extremely long transaction cycle, and there’s any number of times during that cycle when the deal could fall apart.”

“If you don’t focus on the opportunities that have a reasonable chance of success, then you’re probably not going to succeed.”

Perseverance and people skills also help the broker keep the process orderly. “We’re dealing with business decisions where there are usually multiple decision-makers on both sides of the transaction,” Brown says. “Almost by definition, it’s complicated. You’re going to have attorneys, other commercial brokers, title and escrow, and CPAs. Typically, there’s going to be some kind of analyst who’s running the numbers and putting together an economic pro forma. If there’s going to be any kind of build-out, you might have an architect and a contractor involved. Maybe a mechanical engineer, an electrical engineer, an environmental consultant. And oftentimes, each one of these guys is really a company. You add it up and that’s a lot of people.”

According to Brown, one of the corollaries to perseverance is focus. “One thing in our business — and I suspect more so than most — there’s an infinite number of ways to waste your time during the day. If you don’t focus on the opportunities that have a reasonable chance of success, then you’re probably not going to succeed.”

Perseverance and focus play their part right from the beginning (perhaps especially at the beginning) of an agent’s career. “There are barriers to success in this industry,” says Haas. “And generally speaking, they go to the first two years. In the first year, you’re really only going to make beer money. The second year, you might just make enough to get by. But it’s normally not until the third year that you’ve got the opportunity to make meaningful money. So, you’ve really got to have a lot of confidence in yourself.”

The older generation of commercial brokers got by on its reputation for honesty and integrity as much as hard-won market knowledge. “I think of Wally Nagao,” says Ron Ward, referring to the highly experienced Grubb & Ellis broker. “Wally is one of the most genuinely nice, likeable and capable guys in this business. He’s a gentleman. More than that, though, he has a reputation that ‘what Wally says, he does.’ ” In an industry based on relationships, that kind of reputation is golden.

That’s why honesty and integrity still have currency today. Even though the industry has become much more complicated (most deals today are not the work of individuals, but of multiagent teams,) the best producers know it’s still about relationships — not just with clients and other brokers, but with the slough of other professionals that make deals happen.

Beyond that, it just comes down to hard work. Steve Sofos, president of Sofos Realty, has a clear-eyed view of what it takes to be a top producer in today’s difficult market:

“And in a good market,” he adds, smiling wanly, “it’s literally the same.”

Talent, training and financial incentives are driving a new era of filmmaking, TV and digital media production in the Islands.

After Angèl Foster and her husband, Brian, opened Island Olive Oil Co. in 2012, they discovered their company was a lot like an onion, with far more layers than they could have ever imagined.

A Condominium Can Last Hundreds of Years, But Not Its Components

This story was updated Sept. 10, 2020 to correct information on the expected useful lifespan of pipes and add further details. A 40-year-old Honolulu condominium can show its age in many ways: brittle, leaking pipes; cracks in its concrete walls…