Condo Flips: We Just Got the Keys, Let’s Sell

The buyers who purchased condominiums in Kōʻula, the sixth tower built by The Howard Hughes Corp. in its 60-acre Ward Village in Honolulu, finally got their keys this fall, nearly four years after sales began.

Dozens of those buyers immediately put their new condos back on the market. But if they were hoping to turn a profit, they may find disappointment in Hawaiʻi’s current real estate environment marked by slower sales and higher interest rates.

More than 50 units are listed for sale and four are in escrow, all seeking prices higher than what the seller paid the developer. So far, one resale has closed: A two-bedroom, two-bath unit on the seventh floor – for which the original buyer paid $1.365 million – closed on Oct. 28 for $1.495 million.

The seller’s gross profit was $130,000, 9.5% more than the original price. But that’s before closing costs, which can run 8% to 10% of the selling price, in which case the seller likely broke even or lost money. 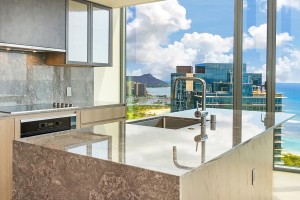 This three-bedroom penthouse in Kōʻula, the newly finished tower at 1000 Auahi St. in Kaka‘ako, is on the market for $3.1 million. | Photo: courtesy of May Tyrrell

“It’s all about the timing and about the project,” says May Tyrrell, broker in charge at Jack Tyrrell & Co., which has four listings for units in Kōʻula, including a three-bedroom penthouse with an asking price of $3.1 million. “Some people think they could be a fairy-tale story to buy and flip it right away. This is not the market at all.”

It’s not uncommon for investors to purchase a new condo from a developer before the building is completed, then flip it for a profit after closing two or more years later. When the market is going up, there could be a tidy profit.

Prices Rose, But So Did Interest Rates

Prices in Kakaʻako, where Ward Village is located, have gone up considerably since January 2019 when the 565 units at Kōʻula first went on the market, with prices ranging from $500,000 to $2.6 million. The median price for condos sold in Kakaʻako in January 2019 was $809,000; last month it was $1.06 million, according to the Honolulu Board of Realtors.

But something else went up. First, the average rate of a 30-year mortgage declined from 4.5% at the start of 2019 to about 2.7% by the end of that year. Then mortgage rates began climbing at the beginning of 2022, reaching 6% the week that the mass handover of keys at Kōʻula began, and reaching 7% before backing down slightly last week. 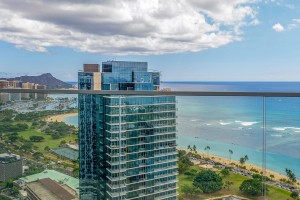 May Tyrrell, broker in charge at Jack Tyrrell & Co., has four condo listings in Kōʻula. | Photo: courtesy of May Tyrrell

Still, Tyrrell sees Kōʻula as a good investment to hold. The building, which was designed by Jeanne Gang of Studio Gang, has great views, fronts Victoria Ward Park and is the only one of the Ward Village buildings where every unit has a lānai. She’s so bullish on the building that she and her husband, Jack Tyrrell, bought three units in Kōʻula themselves as investments.

The Tyrrells live in Waiea, the first luxury Ward Village tower. It opened in 2017 with 177 units – and front-row views of the ocean – but was beset by construction defect lawsuits two years later. Jack Tyrrell likened Waiea to Hokua, which opened just down the street at 1288 Ala Moana in early 2006. The luxury high-rise tower had plumbing issues after opening, but units there have since appreciated considerably. For example, he and May bought a unit there from the developer for $680,000 in 2006 and sold it 10 years later for $2.5 million.

Now that repairs to Waiea are nearly complete, he expects units there to appreciate as well.

Each Part of O‘ahu Has a Unique Real Estate Market