Don’t Laugh: Our Political Inefficiency Is Really A Gift

When this magazine published its “Power Issue” in October 2009, we asked “Who Runs Hawaii?” The answer, of course, was complicated, but we managed to sum it up in a two-page chart listing the main players and in our lead headline. 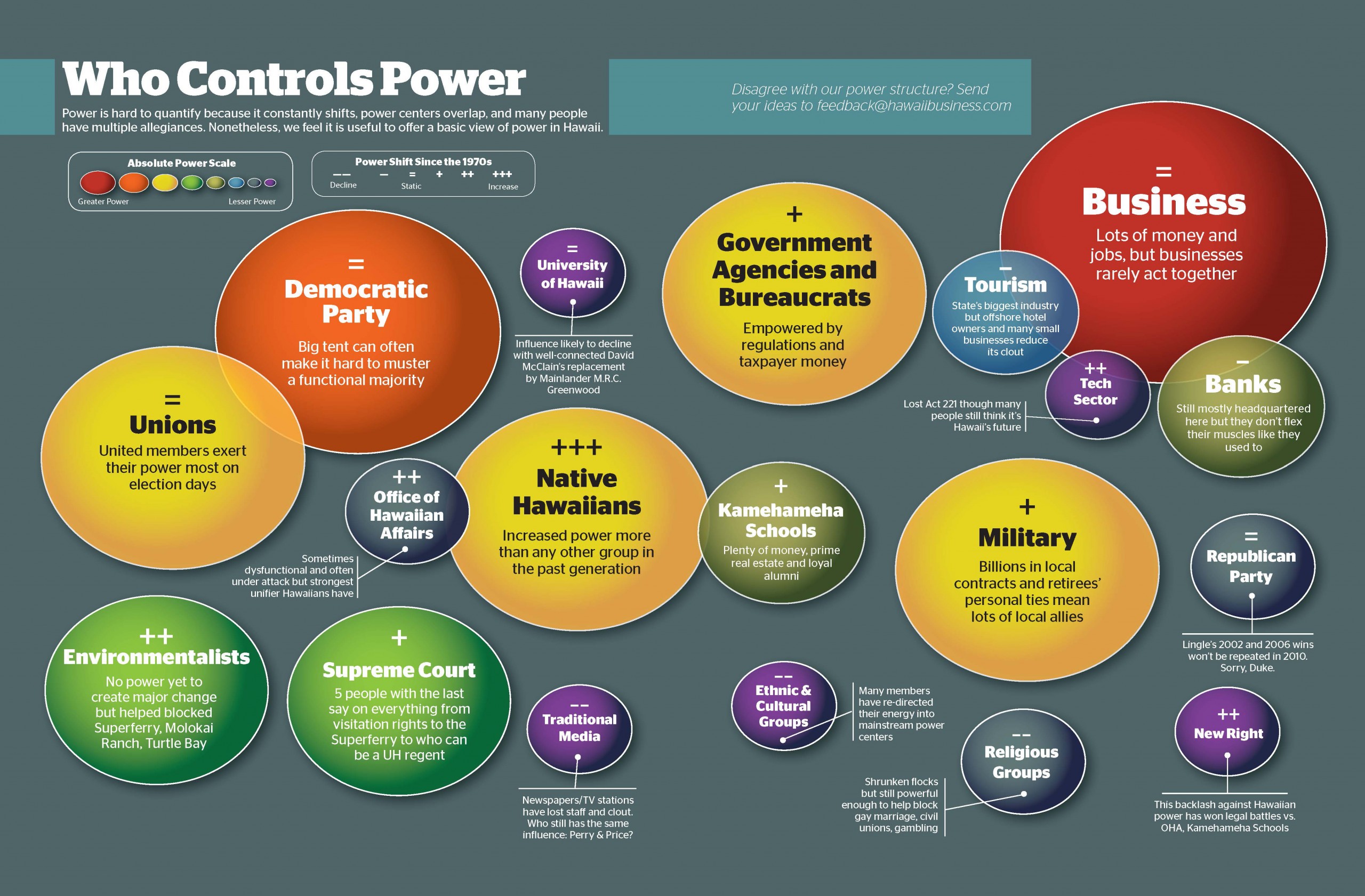 I’m proud of that chart because it not only showed power centers of different-size bubbles, indicating varying degrees of influence, but also whether that influence had grown or waned since the 1970s. We showed where major overlap between the power centers occurred and it was all shown on a left-right ideological continuum.

Among the major powers in Hawaii, we decided back in 2009, the overall power of the Democratic Party and local unions had held steady since the Seventies, while the power of Native Hawaiians and environmentalists had soared. Business power had held steady, while traditional media and religious groups had lost much power. We recognized the growing influence of the tech sector and the New Right.

I’m also proud of the main headline: “Good News: A Small Power Elite No Longer Runs Hawaii. Bad News: Nobody Does.” Thankfully, that headline still applies and that’s how Hawaii – in all our glorious imperfections and failings – might serve as a model for America. I’m not just talking about many ethnic and racial groups coexisting in imperfect yet admirable harmony. I’m also talking about something that is closely, yet possibly even more valuable – political coexistence. No one group runs modern Hawaii or sets the rules; politics gets done through messy compromise and failure is common. Let me explain before you fall on the floor with laughter at the idea that Hawaii politics could be a model for anyone.

First, a brief historical lesson to show that powerful ethnic groups will go to great lengths to maintain their power. The worst example in American history came after the Civil War, when African-Americans were freed from slavery and guaranteed the right to vote by the 14th Amendment to the Constitution. For a dozen years, former slaves exercised that right across the South and elected many African American politicians to important state and federal positions, including U.S. representative and U.S. senator.

But the close presidential election of 1876 led to the infamous Compromise of 1877, an unofficial deal between white leaders of the Republican and Democratic parties. Southern white leaders would end their objections to the election of Republican President Rutherford B. Hayes, while Northern white leaders agreed to withdraw federal troops from the South. With the U.S. Army gone, whites staged a violent and illegal counterrevolution that eventually stole voting rights from African Americans in the South. Under Jim Crow, your political views mattered much less than the color of your skin.

The Islands had their own theft of power a few years later when white businessmen – some were Americans and others were citizens of the Kingdom of Hawaii, but they were united by personal interest and the color of their skin – overthrew Queen Liliuokalani and the Kingdom in 1893. The resulting oligarchy ended in the 1950s because Japanese-Americans, other ethnic groups and unions coalesced within the Democratic Party and began a dominance of elected state and federal offices that continues to this day.

Yes, we have a one-party state in Hawaii, but the local GOP has contributed to that by castigating any center-right candidate who favors pro-business policies without whole-heartedly embracing the ideology of the Koch brothers, Donald Trump, et al. Ronald Reagan’s big tent has been replaced by a narrower tarp that mostly covers only white people. Beth Fukumoto, Charles Djou and others have abandoned their party and the Linda Lingle of 2002 would be branded a socialist by many in her own party today.

So instead of a two-party Legislature, we have this political soup of five Republicans and 71 Democrats, few of whom fit easily in a constant spot on the left-right ideological spectrum. And here’s the key: Ethnicity does not create the political divides in Hawaii it once did. Yes, Democratic legislators are disproportionately Japanese-American and the small sample of Republicans are disproportionately white, but there are plenty of white Democratic legislators and some Japanese-Americans belong to the Republican Party even after Fukumoto’s defection.

Yes, it is true that race is a factor in any election in Hawaii. Any politician will tell you that if you press hard enough. But it is also true that in Hawaii, ethnicity is not destiny. It’s tough to get elected on ethnic identification alone. In Hawaii, everyone is part of an ethnic minority and there can be no tyranny of the majority.

So it’s not just that Hawaii’s people usually get along on the beach and in the surf, on the morning bus ride, at work and in bars. It’s that we get along at the Legislature and the county councils; ideology and politics often divide us, but race and ethnicity are far less of a factor than elsewhere in America. That’s the important political lesson we can teach a nation in which everyone will soon be a minority.