It’s 2 a.m. in Hilo town. The loud noises in the front yard have the elderly homeowners frightened and fearing burglars. It’s not the police’s first call to the neighborhood, but they find nothing – again. The next morning, footprints reveal wild hogs as the culprits and Bad Company is called.

Barry Iwashita and Dexter Egdamin founded the Hawaii Island-based wild pig consulting and removal service. The two expert hunters first came together in 2007 as part of Hawaii County’s effort to control wild pigs. With their names, along with others, in the county’s pamphlet on pig trappers, Egdamin says, “the word of mouth started spreading.”

Bad Company’s tools include snares, traps and rifles. The trap bait is usually avocados, macadamia nuts, molasses and dry hog scent. Egdamin builds a proprietary trap that friends tell him he should patent.

Egdamin builds the traps by welding together hog panels of thick gauge metal, with a door that slams shut like a guillotine. But some pigs are too big to trap – their biggest yet was 300 pounds. “Two sows over 300 pounds side by side filled the pickup truck,” he says, and that’s why he invested in a winch for his truck.

“The pig problem is big … and growing, no doubt about it,” he says. Development and fences have blocked off some areas, but, “Pigs are smart and find a way down from the mountains.” 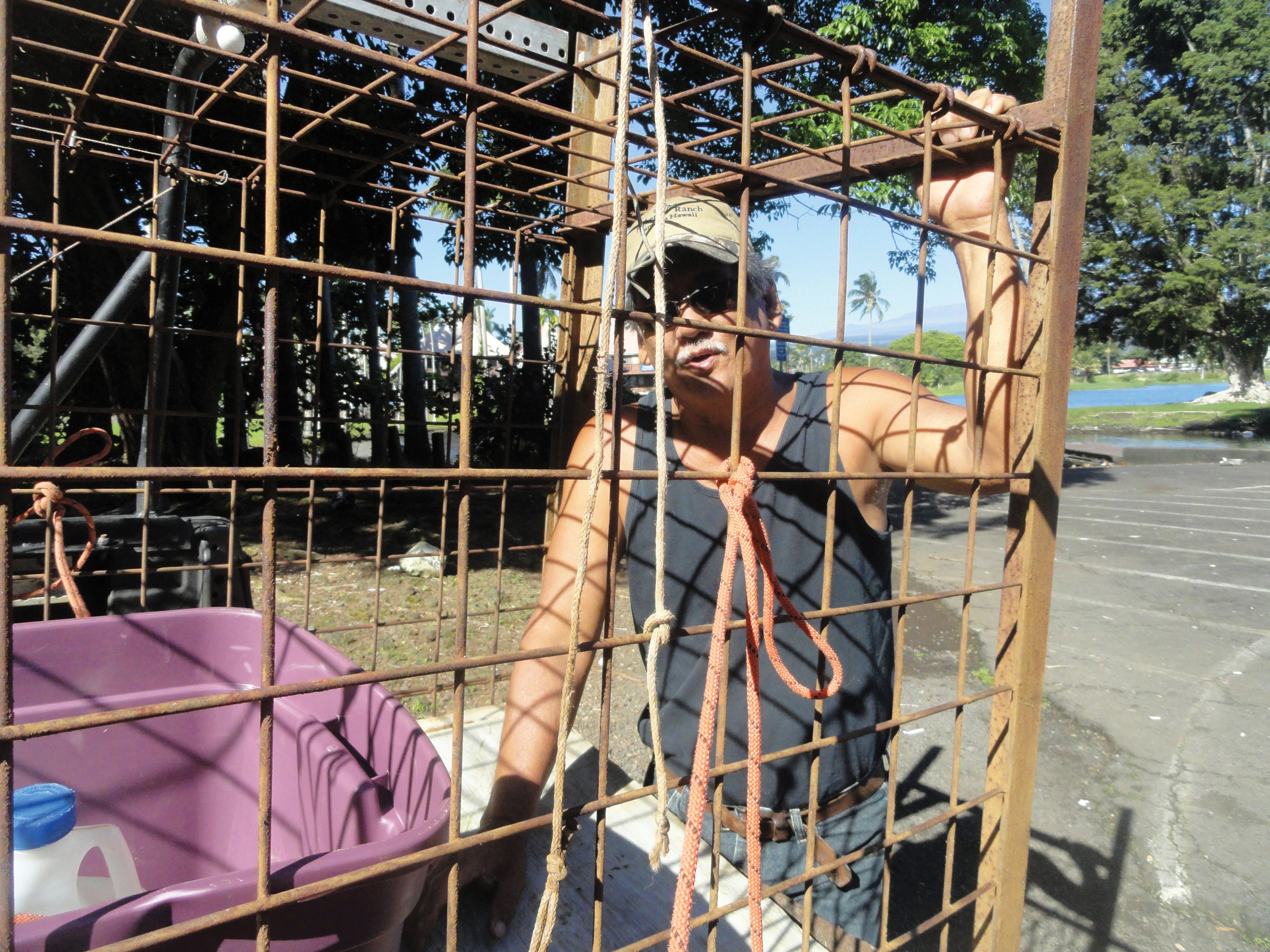 Barry Iwashita with one of the hog traps used by Bad Company. | Photo: Robert Duerr

Iwashita continues: “You’d be surprised at where we catch pigs. Caught one good-size one right above the police department. Caught pigs right by the Baptist Church. People put good stuff in the yard … avocados, potatoes, bananas,” he says. That attracts the pigs and “it’s only a matter of time.”

Egdamin says these creatures are prolific. “Pigs can have two litters a year with four to 12 piglets,” he says.

With homeowners and pigs comes paperwork. “It’s illegal to hunt without paperwork,” Egdamin explains, “so we contact police to avoid problems with neighbors. Release papers are a whole folder.”

But paper cuts are not the biggest danger. “I’ve been run over and bit. Been to the emergency room at the hospital. Barry got bit. I had to get stitches. It was not even a big pig, 120 pounds, but he got the best of me.”

Bad Company faces stiff competition from other trappers, hunters with dogs and poachers. “Traps stolen, snares stolen … Had to turn people in for hunting on private property. It’s crazy. Not a very good thing to get into now.”

To avoid the neighbor-related paperwork and gain the option of shooting at pigs, Bad Company now concentrates on large properties and farms. “Farmers are the best guys: 24-hour access and no neighbors,” Egdamin says. One customer, Jennifer Weinert of Weinert Farm in Onomea, has seen as many as two dozen pigs on an afternoon walk. She says Bad Company “is a dream come true – professional, friendly and non-invasive.” When Iwashita maintains her property, she says, “He does his hunting and we don’t know he’s here. And sometimes he brings us smoked meat!”

Egdamin says most of his meat is donated to a pastor who serves a Micronesian church. “Don’t want to waste it. We give it to him and he calls different families to use it. I keep some to smoke.”

This article appears in the May 2014 issue of Hawaii Business Magazine.
Categories: Business Trends