Does a founder’s gender shape the evolution of a startup? Three female founders reflect on how being a woman has defined their businesses.

You’ve probably heard enough intriguing founders’ stories to know that an entrepreneur’s personal experiences and identity – whether it’s culture, ethnicity, religion, class or education – often leave distinctive imprints on their company. But how influential is gender when the founder is a woman navigating a space traditionally dominated by men?

We sat down with three Hawai‘i-based female founders to get their take on how being a woman has influenced their paths to entrepreneurship and their growing businesses:

Though operating in different industries, each woman recognized a business opportunity born from their family circumstances. Women have traditionally been more family-focused and done the lion’s share of caregiving, so they may be more likely to find business inspiration in their family lives. 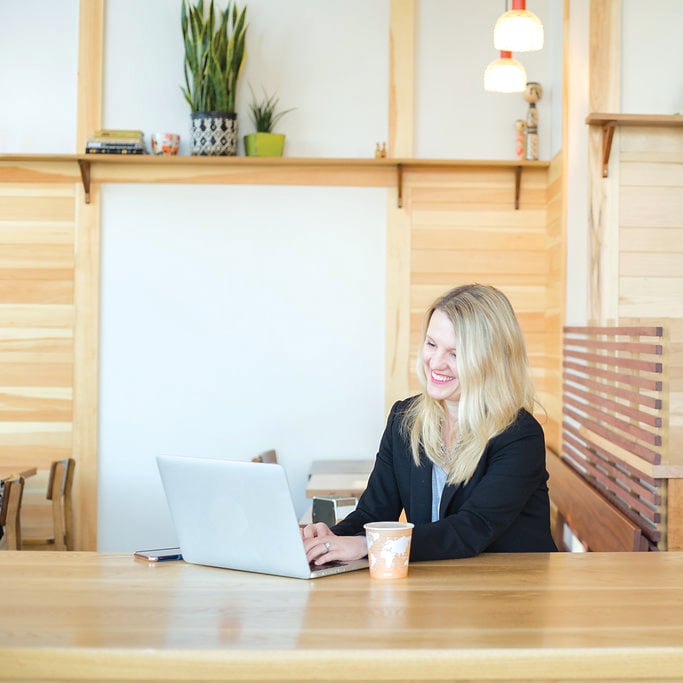 When Rodewald – a software engineer and software entrepreneur three times over – became a military spouse and mother, she combined her experience in building teams of remote workers with an abundant talent pool of other military spouses who had made career sacrifices to accommodate an itinerant military lifestyle. She says she discovered the predominantly female population of military spouses in her new neighborhood were interested in flexible jobs, just as she was.

“I kept meeting all these spouses that would ask, ‘How are you working? What are you doing? You’re doing this all from home? How can I get something like that?’ ”

Rodewald started Instant Teams in 2016 and has provided hundreds of companies across the U.S. with remote teams of workers, while creating jobs for unemployed and underemployed women.

Gusick and her family’s approach to her father’s death inspired her to help other families navigate what she calls “the Deathspace” with eco-conscious values. After an exhaustive search for an environmentally friendly alternative to the nonbiodegradable caskets that dominate the funeral industry, Gusick’s family purchased a custom-made all-wood casket to honor her father’s wish for a green burial.

Gusick then left her Silicon Valley tech career to start Pāhiki Eco-Caskets, which she calls Hawai‘i’s first and only eco-friendly wooden casket manufacturer. She says she finds the greatest fulfillment in relating to people with humanity during an often complex and intense time.

“I enjoy making things that are beautiful and dignified, but that’s a smaller part of it to me than connecting and engaging with the families in this space. That sort of warmth and emotional connection is not specific only to women, though I would say it’s more pronounced and more natural in some ways.”

She launched the company two years ago and dedicated herself full time about 10 months ago. “This is a truly perfect blend of some of my material skills and my more emotional skills,” says Gusick.

“My mom always made this bone broth anytime we were sick. It was grandma’s chicken soup everyone knows,” says Hehir. When her sister, Sue Delegan, adopted a sickly rescue dog named Brutus, they began feeding him the homemade bone broth and were soon amazed  by his transformation. The dog, Hehir says, improved both in health and appearance.

“He turned into this beautiful dog and people would comment, ‘Oh, you’ve got a new dog. What happened to that other dog?’ And my sister would say, ‘No, this is Brutus. This is the same dog.’ ”

Brutus Bone Broth for dogs was born, and the family-owned company now sells its products on Amazon, at natural food market chain Wegmans and at specialty pet shops in many states, including Calvin & Susie in Hawai‘i. 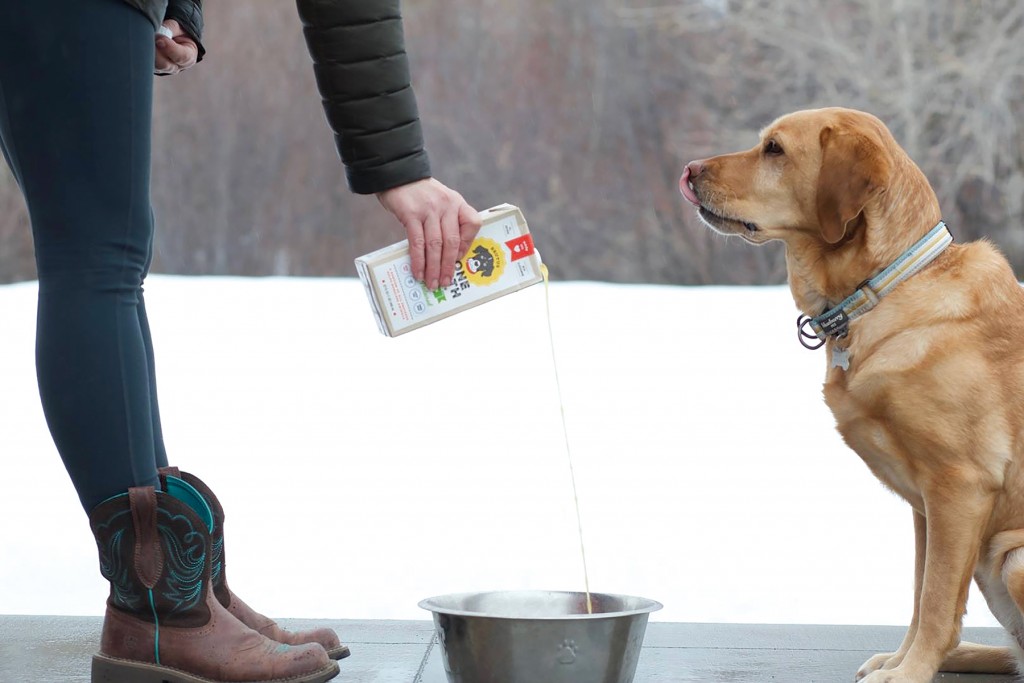 Sue Delegan and her sister created Brutus Bone Broth so that dogs like Lucy, pictured above, can benefit from a nutritious broth inspired by an old family recipe. | Photo courtesy of Brutus Bone Broth

Rodewald estimates her Instant Teams workforce of military spouses is 94% female. She says her company’s relationship-focused culture has been crucial in attracting and retaining talent, regardless of gender.

“We have a male on our executive team and I asked him when he was coming on – because he was very persistent about working with us – why do you want to work with us so much? He said, ‘Because your team and your culture is so great. There’s no ego; it’s just, let’s get this done and do the best that we can at this job.’ It’s funny because I heard that from both of the males that are on our core team.”

Gusick’s approach is also focused on relationship-building and she lets her nurturing instincts guide the customer experience. She says that aside from Pāhiki’s green values, a core pillar of the brand is the highly personalized customer journey.

“The amount of actual high touch and interaction with the people and the families is more important to me than the transaction of the sale,” Gusick says. “I can engage in ways where I express all of the warmth and affection that I feel for human beings.

“I actually think that being a woman and walking into the room and asking people to engage, I have an advantage. I think because we are life givers there’s subconsciously a more natural inclination for people to be drawn to or trust a woman when helping people transition out.”

Hehir says her leap into entrepreneurship was fueled by a desire to make an impact and set an example for her children. “I wanted to do things that are going to help people and their families, and I wanted my kids to see that we can do this,” she says.

Sisters and company co-founders Hehir and Delegan are both working moms – Hehir says Delegan even considers Brutus the dog to be her oldest child. Hehir says motherhood has influenced their company mission of “nourishing your pet while giving back to the community,” and inspired them to start a children’s philanthropy committee.

For a business founded on the nurturing power of “love and grandma’s bone broth,” Hehir says, leaning into their emotional side has helped the company build equity as an authentic, relatable brand in the pet industry, which she describes as an “old boy network.”

“My sister always says we’re real people, we have feelings. We’re not crazy emotional, but we are in touch with the emotional side – and in our industry, with pets that are part of the family, people are emotional about their pets. So I think that allows us to even be more of a humanized brand than if we were just thought up in the boardroom.”

“As a woman and a business owner, there was something very valuable for me about incubating this (business) quietly on my own, to figure things out first before I asked people for help. That incubation phase was absolutely foundational to my level of confidence and my level of understanding and starting to get a better command of the space, of the landscape, of the opportunities.”

2. Don’t Be Afraid To Pivot

“I think females especially, we don’t like to fail, and we like to plan, and we’d like to have everything organized, and then if it doesn’t quite go that way, we feel like we’ve failed. But that’s really just the nature of business. You’re going to try stuff and it’s not going to work and then you’re going to change until you find the rhythm. It’s the natural process of being an entrepreneur so that you can just get better and better. Do not be afraid of what looks like failure to other people.”

3. Never Make A Decision Based On Money

“Whether you’re female or not, my biggest piece of advice is to never make a decision based on money. That’s the worst thing you can do. (Decisions should be) based on the opportunity and what you’re going to learn from it, and how are you going to position yourself to do the next greatest thing. I think for women there’s always going to be obstacles. You just need to know how to maneuver around them. As long as you have your goals in mind and know where you want to be, then you know you’ll make the right decisions.”

Mana Up’s Giveaway Celebrates the Unveiling of Its Cohort 7

The Best of Small Business 2022