20 for the Next 20 Community Project: Helping to Rebuild a Devastated Farm

When she was 17, a wave of brown floodwater swept her away as she tried to flee in her treasured hand-me-down sedan from Grandma.

Luckily, the car was dragged onto debris, allowing the quick-thinking teenager to gun the engine and reverse to safety.

Twenty-two years later she wears silver rings 24/7. They are not a fashion statement – they can actually shatter glass. “They are like a security blanket,” she explains. 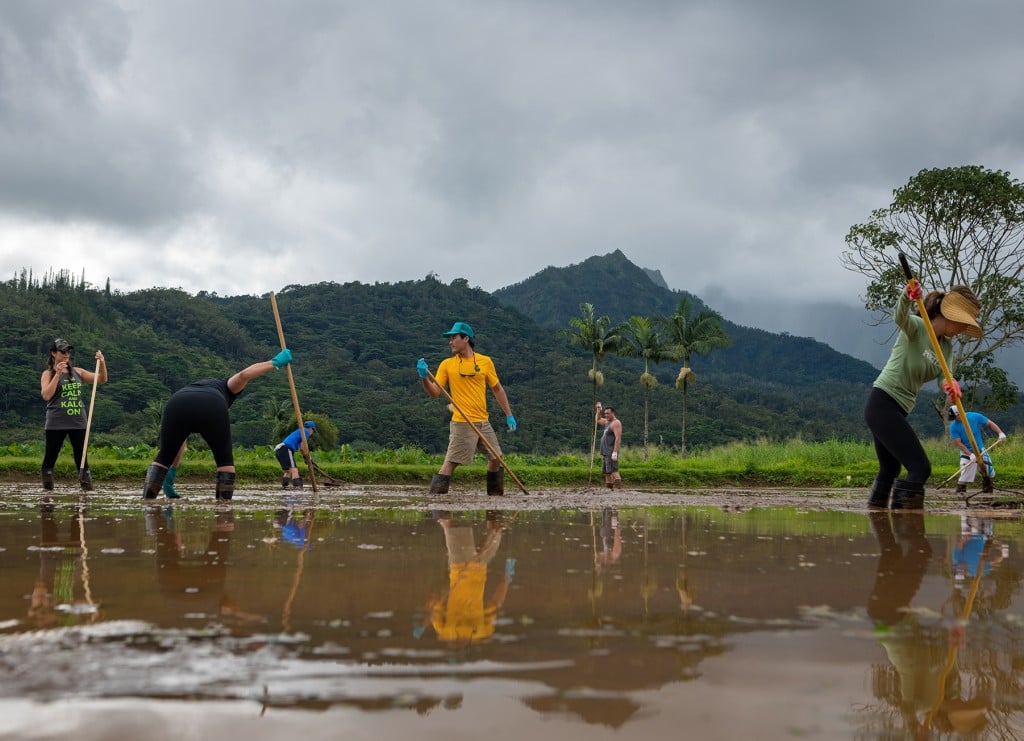 But the floods that ravaged Kauai in mid-April – and subsequent severe weather in 2018 – were like nothing she had ever experienced.

“The storm in April wasn’t like a hurricane or a weather pattern that had a name attached and that we could prepare for,” she says. “It came in the middle of the night and wrecked everything. Things got so bad that they had to evacuate the evacuation center, and I don’t think that has really happened before.”

W.T. Haraguchi Farm lost 13 tractors, seven other vehicles and much of the planted crop. Precious taro seedlings were scattered. Her family’s Hoopulapula Haraguchi Rice Mill, a nonprofit listed on state and national registers of historic places, got clobbered.

“This is as bad as I have seen it, and I lived through Hurricane Iniki,” she says. “My grandfather, who is 96, says he has never been through anything like this.”

When it came time to vote on a community project, it was no surprise that the 20 for the Next 20 Cohort of 2018 decided to support Haraguchi-Nakayama – a member of the cohort – and assist with recovery efforts at W.T. Haraguchi Farm, which has been around for six generations.

The destruction in Hanalei had received extensive media coverage, provoking a visceral reaction from members of the cohort. “I just remember seeing all of the images in the news and thought: ‘There must be something we can do,’ ” notes Doug Shimokawa, senior VP at Pacxa.

Eight cohort members flew from Honolulu to Kauai, marking the first time a 20 for the Next 20 community project took place on a Neighbor Island.

“Helping our ohana in the Neighbor Islands is important,” says Joseph Keaweaimoku Kaholokula, chair of Native Hawaiian Health at the John A. Burns School of Medicine. “We wanted to let them know that we have their backs.”

Armed with heavy duty galoshes, sunscreen and baseball caps, these self-described townies and I hit the loi kalo with vigor. “It was such a special experience,” says Ann Teranishi, executive VP of operations at American Savings Bank. “I’m so glad we were able to do our part in helping out.” 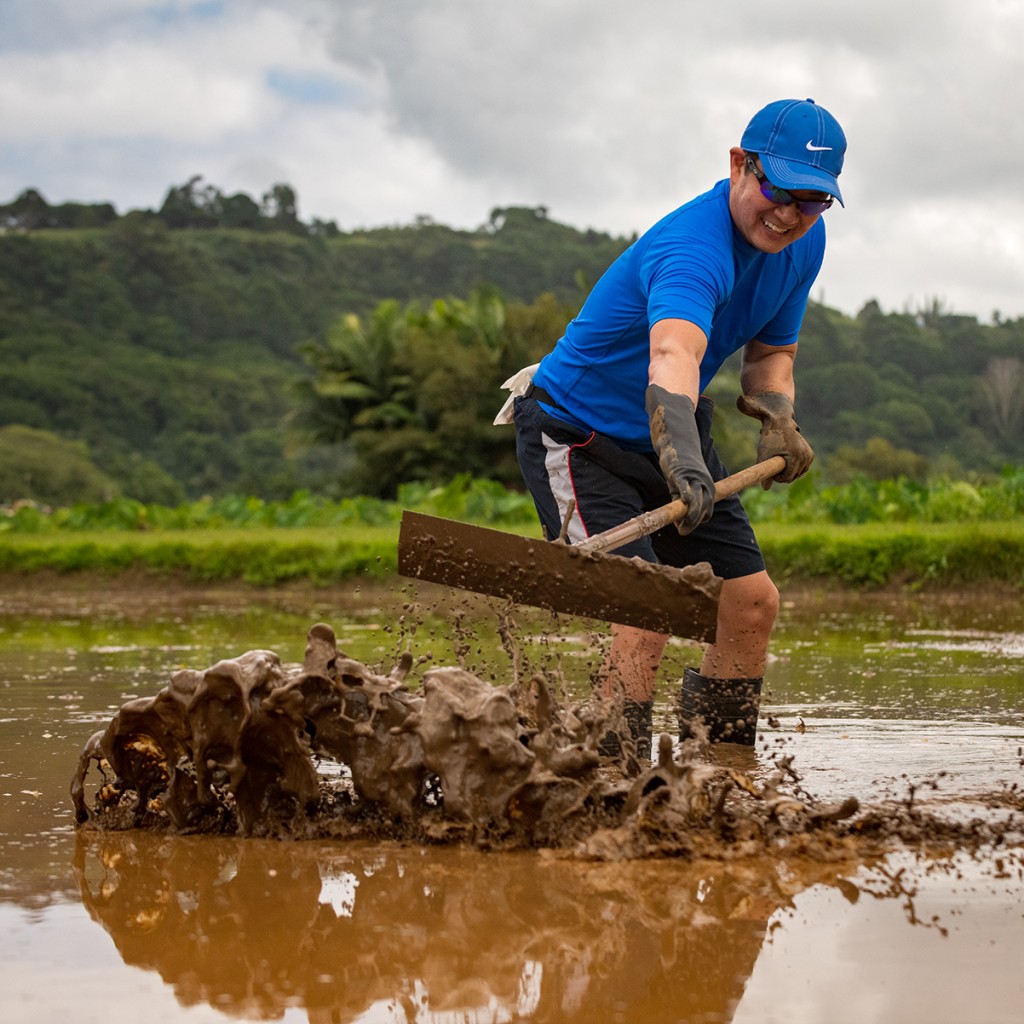 The other cohort members who volunteered were Kevin Sakamoto of Bank of Hawaii, Lauren Nahme of Kamehameha Schools, Nathan T. Okubo of Cades Schutte LLP, Emily Reber Porter of The MacNaughton Group and Beau Bassett of Pitluck Kido & Aipa.

They raked and toiled for hours, leveling the muddy field so seedlings could be planted. “We tried our best to salvage the crop that was already planted before the floods,” says Haraguchi-Nakayama. “But the devastation was so bad, there were fields that we literally had to walk away from.”

Almost 85 percent of Hawaii’s taro is grown on Kauai, so crop shortages this year are certain, she says.

Recovering from this devastation will take about three years – perhaps longer because poor weather has hampered efforts. The flooding in April was well publicized. What didn’t receive as much attention statewide were five subsequent storms that battered Kauai, including the remnants of Hurricane Lane.

Each time there is flooding, it unravels recovery efforts. “The resilience of Lyndsey and her family is remarkable,” says Emily Reber Porter, COO at the MacNaughton Group. “Seeing all of the work they are doing and how they are moving ahead is inspirational to us all.” 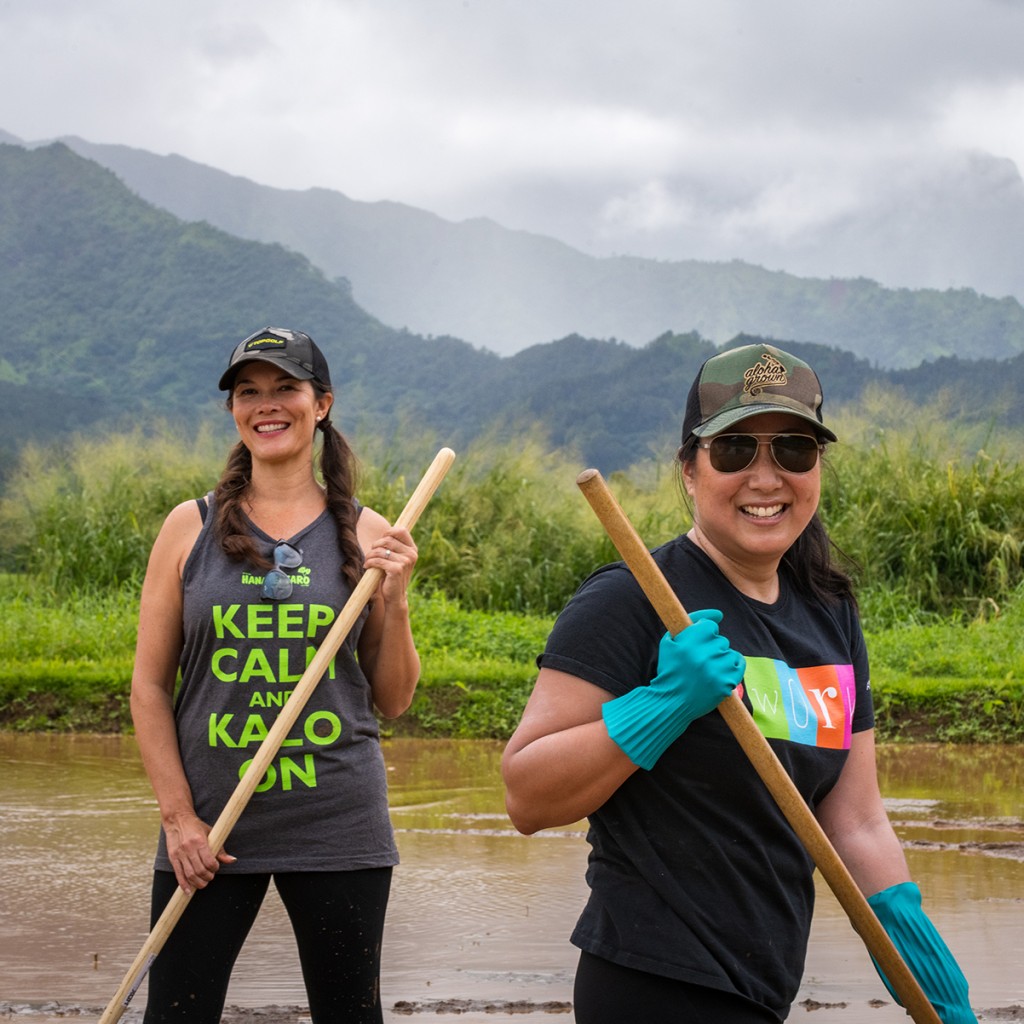 Haraguchi-Nakayama’s family is one of many in Hawaii whose lives were upended by violent weather last year. Consensus among local weather specialists is that warming atmospheric temperatures will likely give rise to more of these treacherous conditions.

Haraguchi-Nakayama’s mother has not been able to move back to the family farmhouse, which is riddled with mold and needs to be demolished. The farming equipment still has electrical issues caused by the water damage. The family is still trying to find farming tools that were swept away.

Yet, they aren’t throwing in the towel.

“As farmers we are trying our best to meet the needs of community,” says Haraguchi-Nakayama. “It is just what we do. Regardless of the obstacles, we have to move forward.”

This article appears in the March 2019 issue of Hawaii Business Magazine.
Categories: 20 for the Next 20, Community & Economy, Nonprofits