For a Healthy Hawaiʻi

Supporting community organizations can bring about positive change in the health and well-being of everyone. 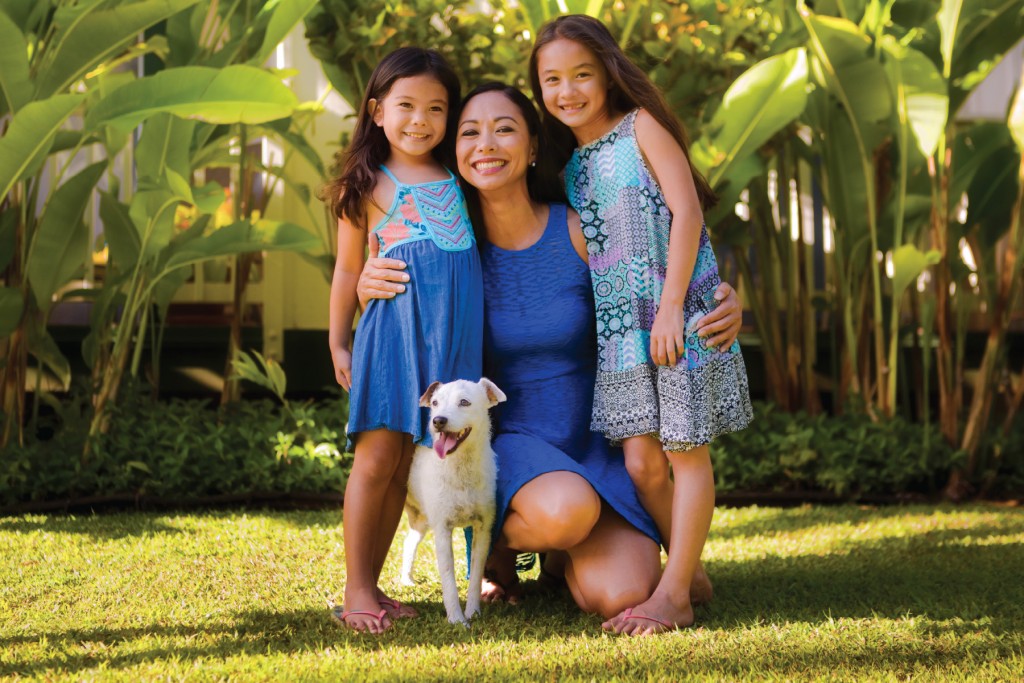 Oftentimes overlooked, where we live and how we live has a big impact on health and well-being. Housing, nutrition, and economic opportunity are all examples of social factors that can drive good health.

With its steadfast belief that good health is a fundamental right, Kaiser Permanente significantly invests in key areas of the community to assist with these issues. Though it’s known locally and nationally as a health care provider, Kaiser Permanente’s care extends well beyond its clinic and hospital walls.

In 2021, Kaiser Permanente provided $3.8 million in support to various organizations around Hawai‘i, including those that address homelessness and housing, anti-hate initiatives, and improving economic stability. Through these many community partnerships, positive changes are being made that can be built upon for years to come.

Kaiser Permanente provided total support of $3.8 million to Hawai‘i community organizations in 2021, including: 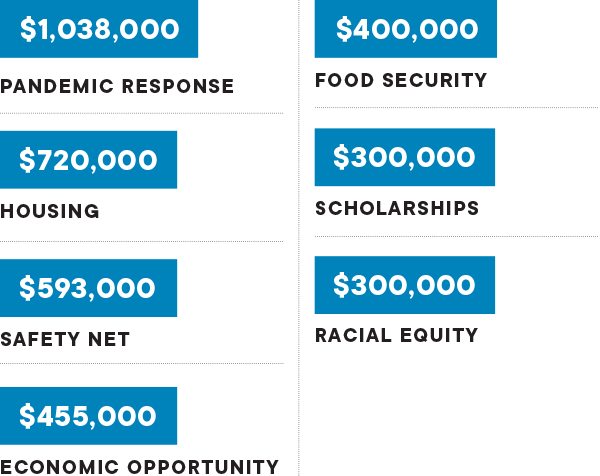 Of all the factors that could lead to poor health, homelessness is the strongest social determinant. The homeless have higher rates of drug abuse and infectious diseases, and death by suicide and homicide often occur.

Data indicates living on the streets leads to an early death. There were 373 homeless people who died from 2014 through 2018, and the average age of their deaths was 52.6 years, according to a 2019 report by the Honolulu medical examiner. It’s a life expectancy that is decades shorter than the general population.

Committed to improving the health of Hawai‘i’s communities, Kaiser Permanente gave $790,000 in 2021 to various Hawai‘i-based organizations to address housing and homelessness, including The Institute for Human Services (IHS), Project Vision, and Partners In Care.

“There are about 4,500 to 5,000 people on O‘ahu per night that are experiencing homelessness, about half of whom are unsheltered,” says Jill Wright, director of philanthropy and community relations for IHS. In the state of Hawai’i, there were estimated to be 6,458 homeless individuals in 2020.

“It’s hard in most cases to pin-point one specific thing that caused a person’s homelessness,” Wright says. “It’s usually a series of things or a combination of things that lead a person to the streets.”

During the pandemic, Kaiser Permanente helped IHS establish a Homeless Triage and Transfer (HTAT) program that offers COVID-19 education, testing, and vaccination. Outreach teams went into the homeless community to explain what COVID is, how to wear a mask, make sure they were washing their hands, and also to encourage them to find shelter off the street.

“HTAT was really trying to ensure that the individuals living on the streets of Honolulu that really were both most vulnerable to COVID and also least likely to take protective measures to protect themselves and their community to make sure that we were able to connect with those folks and get them the information and protection,” says Wright.

Also currently tackling COVID education and prevention, the nonprofit organization Project Vision Hawai‘i has built relationships through the years with many people in the houseless community through its mobile programs, including vision care, social services, and mobile shower units.

“Kaiser Permanente was one of the first backers to our efforts, especially to the houseless community, and because of their support, it’s snowballed and we’ve been able to reach out to thousands of people now over the last year and a half, and we couldn’t have done it without them,” says Darrah Kauhane, executive director of Project Vision Hawai‘i. 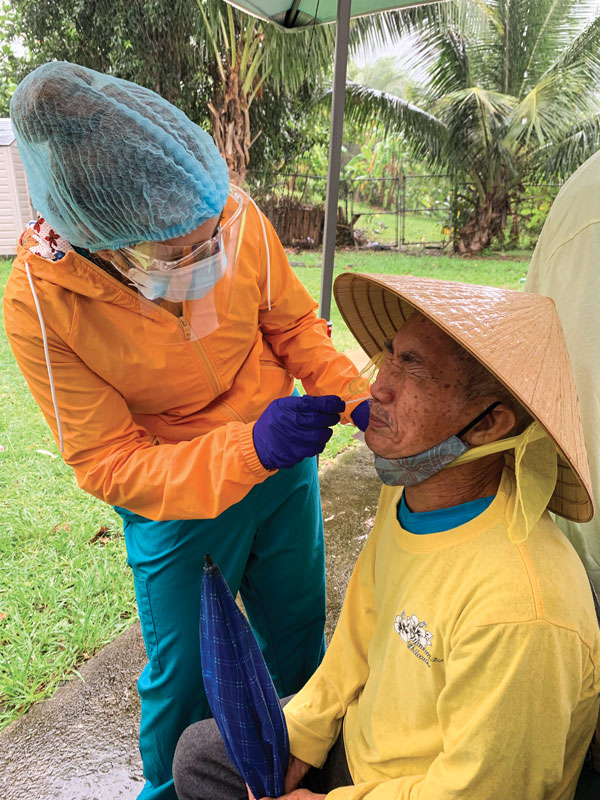 “Our main targets for this grant are the houseless community, public housing, low-income housing and minority populations,” Kauhane continues. “On any given day, we are doing COVID testing and COVID vaccinations at homeless shelters, homeless encampments, group homes, treatment facilities, and we do rotations and outreach throughout different public housing units, affordable housing units, pretty much wherever we see no one else is going,” she says.

To help the homeless find homes, Partners In Care, a coalition of organizations dedicated to eliminating homelessness, started a landlord engagement program in 2019. It is a system-wide approach to finding landlords who are willing to rent units to people experiencing homelessness and then matching them up with clients and the subsidies and programs that fit best.

“It was really to engage as many landlords as we could to get units for people who were experiencing homelessness on O‘ahu,” says Laura Thielen, executive director of Partners In Care. “It’s hard to find landlords who will rent to formerly homeless folks or take a subsidy, so we decided to create a program to really work one-on-one with landlords.”

Kaiser Permanente was intrigued by the concept and put funding toward Partners In Care’s landlord engagement program, with a special focus specifically on homeless veterans. This is part of Kaiser Permanente’s commitment to the nationwide “Built for Zero” movement to end homelessness that was started by the national nonprofit Community Solutions. The goal is to build a future where homelessness is rare or brief.

There were 356 veterans experiencing homelessness on O‘ahu at the end of 2020, according to a report by Partners In Care. Most veterans have a disabling condition. Also, disability, mental health illness and substance use disorder are all nearly double among veteran populations.

“Every homeless person has a backstory, whether it be a veteran or non-veteran facing some life turmoil problems or not handling things very well. People don’t go homeless for nothing,” says Miguel Riveria, a beneficiary of the veterans program. “A lot of it has to do with morale I think, and depression. That’s one of the issues I was facing, lots of depression. I was overwhelmed financially.”

Born and raised on O‘ahu, Riveria served six years in the U.S. Army as a combat medic until 2018. He deployed to Afghanistan and other areas of the Middle East and suffers from post-traumatic stress disorder (PTSD). A series of events led to his homelessness, starting with divorce, alcohol, and drug abuse. Following rehab, he was displaced from a PTSD program at Tripler Hospital due to the pandemic and became homeless. He sheltered at U.S.Vets for a time before eventually getting an apartment with the help of Partners In Care.

“It’s a good springboard for where I hope to be in 10 years,” says Riveria. “I don’t know how I would have got from where I was at to where I’m at now if not for the program.”

With anti-Asian hate movements gaining momentum across the country, organizations in Hawai‘i have increased focus on anti-hate initiatives for the Micronesian and Compact of Free Association (COFA) resident populations. They’re the latest minority group moving to the Islands where racism and discrimination has escalated.

“I think it’s gotten worse,” says Paul Hadik, president and CEO of Pacific Resources for Education and Learning (PREL). He’s been leading efforts to expand understanding of the region. “There have been issues with discrimination toward the community, such as name calling. Sometimes it’s the way they’re treated at jobs, often limited to 19 hour per week jobs so they don’t get benefits. Housing has always been an issue. It’s been a rough 20 years or so for that community group coming in.”

Kaiser Permanente is supporting PREL’s newest initiative, which is to get a more accurate number of COFA residents in Hawai‘i. “The state just does not know how many COFA residents are here,” says Hadik. Getting realistic data will help the state better address issues in those communities, such as housing and food insecurity, and provide more funding for targeted programs.

Another organization fighting hate and cultural misunderstanding, We Are Oceania was founded in 2015 to empower Micronesians in Hawai‘i. The organization hopes to educate the community about Micronesians, and to support youth at its newly opened youth center. 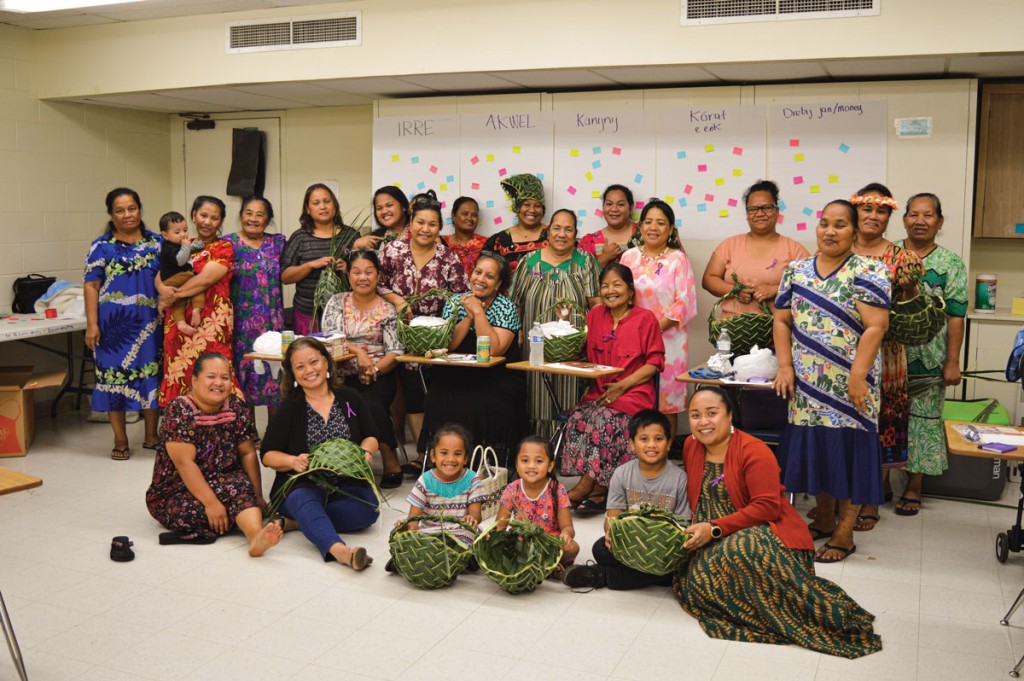 “There’s a lot of misunderstanding that we come here to take advantage of the benefits here in Hawai‘i and that when we come here we’re dirty because we live in crowded homes, so that led to people calling us cockroaches,” says Josie Howard, executive director of We Are Oceania. “It’s really a misunderstanding and our youth are able to explain that ‘I live in a crowded home because, in my culture, family’s very, very important and we take care of our families and support each other.’ It’s a different lifestyle.”

To combat domestic violence in the COFA community, the Domestic Violence Action Center (DVAC) added a COFA advocate to its staff, due to support from Kaiser Permanente.

“Each ethnic community is different, and their cultural norms and their community values must be honored and incorporated into an approach that responds to their needs,” says Nanci Kreidman, CEO of DVAC. “With the problem of domestic violence, it’s very important to have somebody who looks like them and holds a shared identity and a cultural belief system that mirrors the community that is being served.”

DVAC’s COFA advocate, Joanne Loeak, currently has 19 active cases and is devoted to outreach education and provides hands-on service, such as escorting clients to the courts, crisis intervention, and emotional support.

“It’s not easy being from my culture and understanding how domestic violence is something that nobody ever talks about. We don’t even have a word for domestic violence,” says Loeak. “As long as we have supporters and the work continues, then I believe that we are making progress.”

Compacts of Free Association (COFA) are treaties formed between the United States and three independent countries: the Federated States of Micronesia, the Republic of Palau, and the Republic of the Marshall Islands. Initially it was to compensate the countries for losses due to U.S. military weapons tests. In return, those country’s citizens, referred to as COFA migrants, can work, study, and live in the United States as non-citizens.

To better understand the financial instability of Hawaiʻi’s residents, Aloha United Way started the ALICE project, which has brought together organizations, researchers and partners, including Kaiser Permanente, to work on improving the financial health of Hawai‘i.

“ALICE (Asset Limited, Income Constrained, Employed) is defined as above the poverty line, but still not earning enough to make it, even as an employed worker with multiple jobs,” says Lisa Kimura, vice president of community impact at Aloha United Way.

According to the 2020 ALICE report, 42% percent of Hawai‘i’s population are ALICE or below, and struggling to make ends meet. Thirty-three percent are living above the federal poverty level but would be unable to survive a minor financial challenge. An additional 9% are living in poverty. 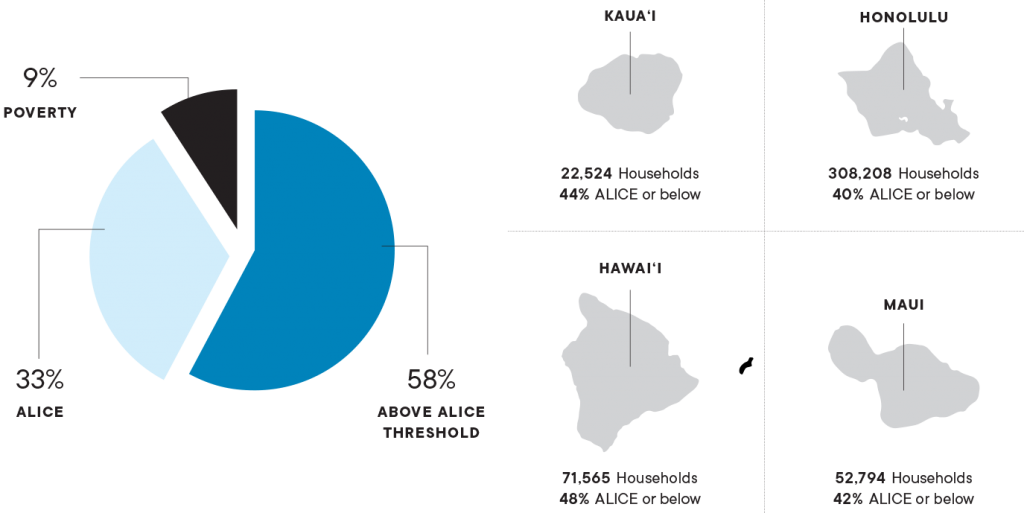 Bringing all households above the ALICE threshold would produce additional earnings, increase spending, and generate additional tax revenues that would altogether add $19.3 billion to Hawai‘i’s annual GDP. In addition to benefits for the state, communities would flourish. Households would have sufficient income for housing, childcare, education, food, transportation, health care, savings, and reliable technology. Seeking these improvements would bring about a higher quality of life for all.