On Wednesday and Friday evenings, members of Hawaii Float Sessions gather across from BikeFactory Hawaii in Kaka‘ako for a scenic ride to Waikīkī on their Onewheels: self-balancing single-wheel electric skateboards.

“Onewheels changed my life,” says Jay Gatchalian, co-founder of the group. “It saved me so much money on gas and I’ve met some of the most awesome people in the Onewheel community.”

A Onewheel moves when the rider places both feet on the board, and because it’s self-balancing, you don’t have to be a gymnast to use it. It is one of the many personal electric vehicles that are convenient for short trips and reduce their owners’ carbon footprints. And PEVs can be just plain fun to ride.

Ephraim Botulan, another co-founder of Hawaii Float Sessions, says people with other PEVs like electric bicycles, skateboards and scooters are also welcome at the group’s community rides and other experiences. Its Facebook group has over 400 members.

Ground transportation accounts for 47% of the state’s greenhouse gas emissions, according to a 2021 Hawai‘i State Energy Office report. The office also estimates that 60% of trips in Hawai‘i are under 3 miles, ideal for PEVs, which are far more energy efficient than cars.

Honolulu has the highest potential for micromobility to succeed, according to a 2019 ranking of 10 U.S. cities by mobility analytics company Inrix. Micromobility is defined as transportation over short distances with lightweight vehicles. The study cited Honolulu’s warm climate and frequency of short trips. 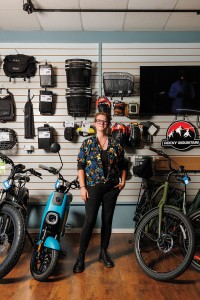 Iniki Galway commutes to work on her electric bike from Kalihi to Kapahulu – about 3.5 miles – and says she “generally feels safe” along the way.

Galway is marketing manager of Ebikes Hawaii, an electric bike store with locations in Honolulu and Kapolei. She says when the store first opened in Honolulu in 2013, “the demographic was a lot different.”

A lot of customers were in their 60s, some with “mobility issues,” she says. But in the last three to five years, e-bikes have become “insanely popular among younger generations.”

Users Of Many Ages 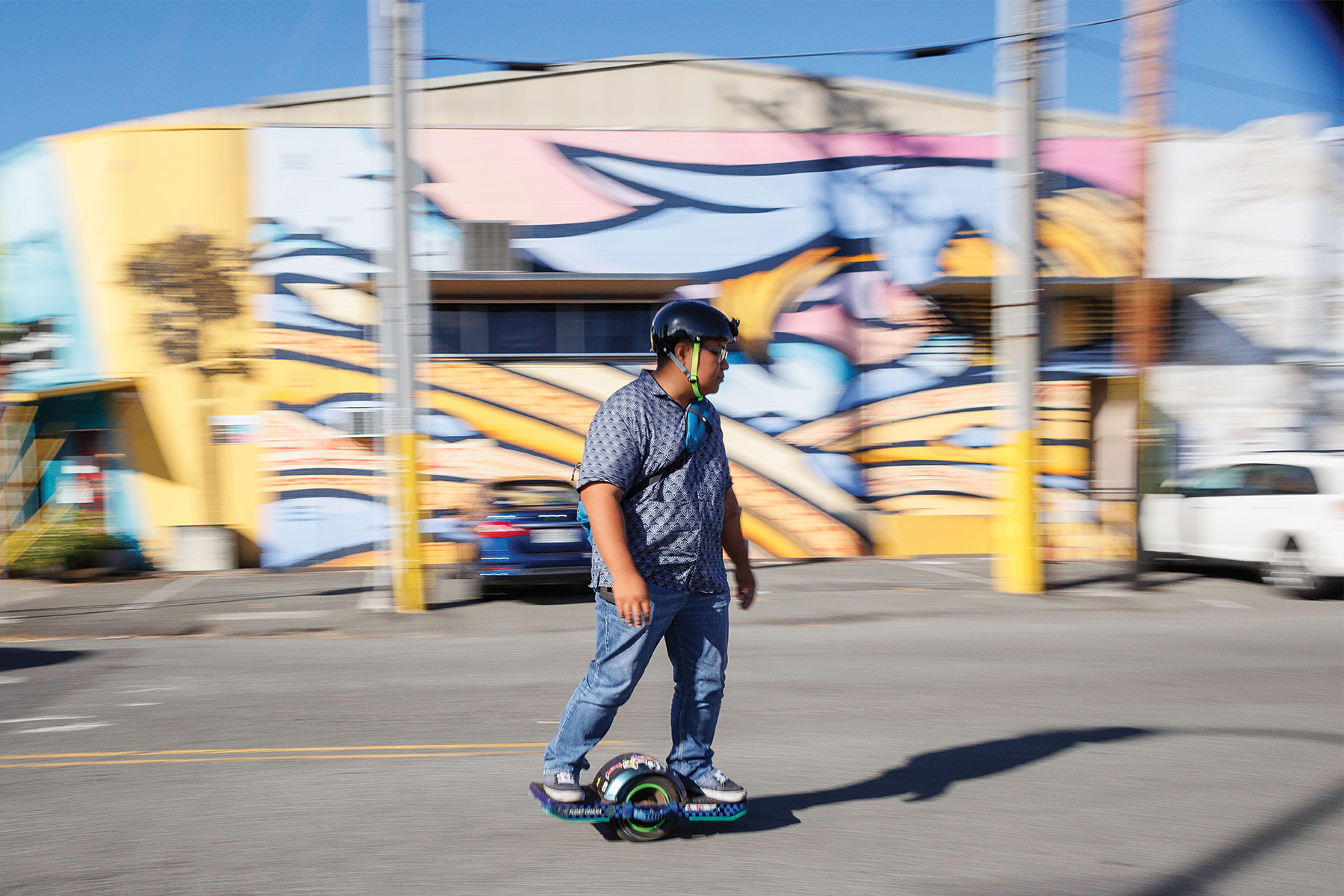 Ryan Nakazaki, who was a policy fellow at Blue Planet Foundation when we talked to him, worked closely with government officials and partners to create programs and projects that reduce carbon emissions from buildings and vehicles. He would commute to work on TheBus or by bike and does not own a car.

He says micromobility vehicles support “mode shift,” meaning they get people out of their cars and into cleaner modes of transportation. Achieving mode shift is a challenge, Nakazaki admits, as “people are reluctant to give up cars because of the flexibility” they provide.

Kaimukī resident Mackenzie Walsh and her husband moved to O‘ahu in 2019, already intending to be bike commuters. She says e-bikes are convenient because finding and paying for car parking is a hassle.

“The bike itself is extremely affordable compared to a car and the maintenance required on one,” says Walsh.

She says that in addition to commuting to work, she and her husband use e-bikes when they go surfing or run errands within a 2-mile radius.

The 34-year-old admits bike riding feels “a little bit dangerous” and does not think “the majority of people in Hawai‘i care about bikers.”

She describes riding along the Ala Wai Canal, with walkers and joggers crowding the bike lane. Once, she says, she tried to get the attention of a woman blocking the way, but the jogger didn’t notice because she had headphones on.

‘Āina Haina resident and e-bike rider Michael Keany echoes these concerns and mentions another. He says he’s been hit by cars and that “road rage people” have hopped out of their vehicles to try to fight him.

“Some car drivers just really have an adversarial relationship with bikes,” says Keany, who has been a cyclist for decades.

He says Honolulu’s “bike-ability” has improved over the years. When he first started riding, he says, there were no bike lanes and competing for space with cars was scary.

That is something the city is working on: creating more designated bike lanes and increasing its bikeway network.

According to the Honolulu Department of Transportation Services, O‘ahu has 220 miles of on- and off-road bikeways, including shared-use paths, conventional bike lanes and shared roadways. A 2019 update to O‘ahu’s bike plan calls for an additional 575 miles of bikeways, which includes 325 miles to be created by the city. The remaining 250 miles proposed are under state or private jurisdiction. The Department of Transportation Services says there is no set timetable to create the additional miles, but the city aims to complete Phase I within five years.

Providing the proper infrastructure for micromobility vehicles, Nakazaki says, encourages more people to use them, and the South King Street protected bike lane, which was completed in 2014, is an example of that.

As of August 2020, there were more than 260 shared micromobility systems in the U.S., including those for docked and dock-less bikeshares and e-scooters, according to the U.S. Department of Transportation.

The national survey found that half of those systems shut down early in the pandemic, either temporarily or permanently.

But rental scooter company Go X launched during the pandemic, and co-founder Khodor Salam says ridership is increasing on O‘ahu. After about a year of operations, Salam says, Go X has had enough rides to basically circle O‘ahu 1,400 times.

Problems In The Past

Honolulu has had issues with e-scooters in the past: Lime, a global e-scooter company, ran into trouble with the city government in 2018 because the company and its customers left their scooters on city sidewalks. There was also confusion back then about where people could ride the e-scooters; they were classified as mopeds, which are not supposed to be operated on sidewalks.

City and state laws ban PEVs from sidewalks. And a law that took effect in 2021 classifies e-scooters separately from mopeds, though the sidewalk prohibition remains.

Go X e-scooters can be picked up and dropped off at more than 50 locations in Waikīkī, such as hotels and stores. Customers find the e-scooters and pay for them using a phone app.

Salam says the company and its app reinforce safety messages for riders. He explains that when a customer picks up an e-scooter, the app outlines scooter laws in the city, and as customers ride, they get another notification reminding them to follow local traffic laws and to keep off sidewalks.

Salam says the company has not had a single safety incident since it started, and that customers rarely leave their scooters on sidewalks or roadways. Go X’s system detects when a scooter has been abandoned, stolen or broken.

This year, Biki celebrated its fifth anniversary and reached over 5 million rides – equivalent to 11 million miles ridden on Biki bikes, according to Boulanger. The nonprofit says it has over 100 stops and 1,000 bikes in its fleet.

According to a 2021 report from Biki, the bikes are used most in Waikīkī (38%) and the Ala Moana/Kaka‘ako area (27%); 19% of Biki users reported using the bikes to connect to TheBus.

Boulanger says Biki is considering adding e-bikes and “waiting for that broader community discussion.” Biki has a prototype of an electric bike called “E-Fit” that it says has been successfully tested in Barcelona, Spain; Monaco; Buenos Aires, Argentina; and Santiago, Chile.

Boulanger notes that Biki was supposed to open at the same time as Honolulu’s rail system. But the train’s still not running, and he says the city should “double down or triple down” on its support for Biki to help riders get to their destinations, especially if rail does not make it all the way to Ala Moana Center.

The city provided a $1 million grant to Biki in 2014-15 for pre-launch work but no financial support since then. Biki operations rely on fare revenue, sponsorship and grants, Boulanger says. “However, they are critical partners in the areas of station hosting and permitting,” he says.

Those areas include the buildout of protected bikeway networks and other Complete Streets projects “that give Biki customers a safer place to ride.” The pandemic demonstrated another reason micromobility vehicles are valuable, Boulanger says.

“The city leadership realized we were an essential service because people were looking for alternatives because they didn’t want to be inside TheBus or Uber during Covid.”