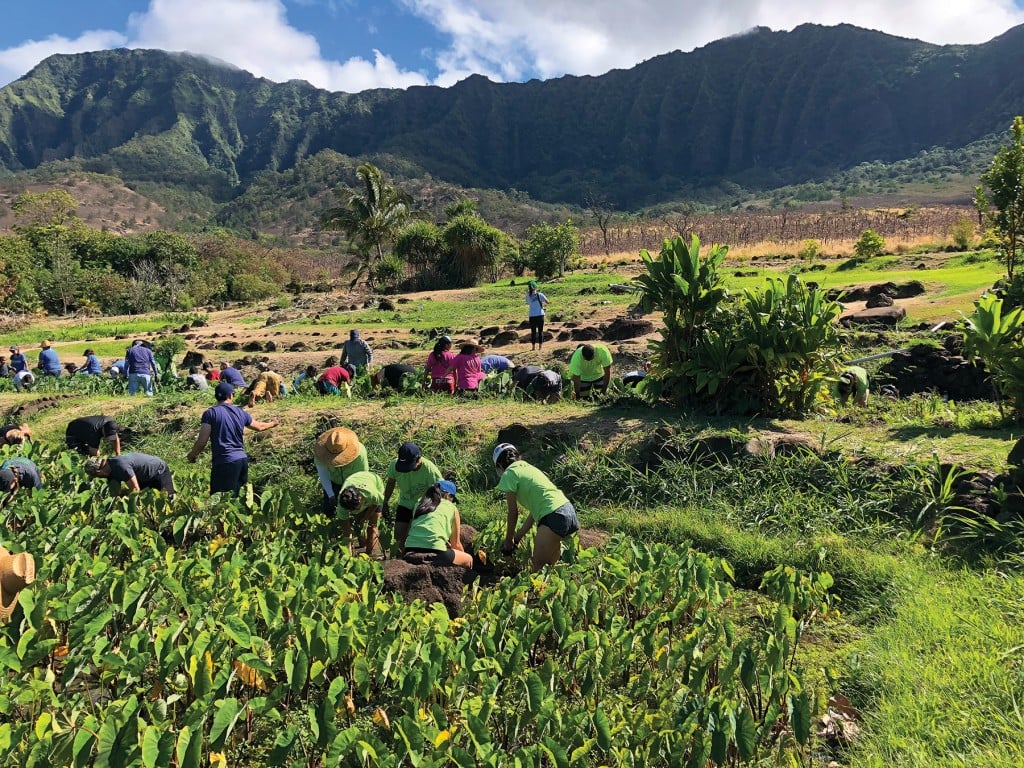 Hikianalia sails to California, sharing gifts of knowledge and sustainability.

It was an epic journey that went down in history. Two Polynesian double-hulled voyaging canoes, the Hokulea and sister vessel Hikianalia, circumnavigated the globe, covering 60,000 nautical miles and visiting more than 150 ports in 23 countries and territories worldwide. But when the three-year voyage was completed on June 17, 2017, its “Malama Honua” mission of teaching people to take care of the earth didn’t end. Just a few months later, the two canoes sailed again on a “Mahalo, Hawaii” tour around the Islands that continued into 2018. 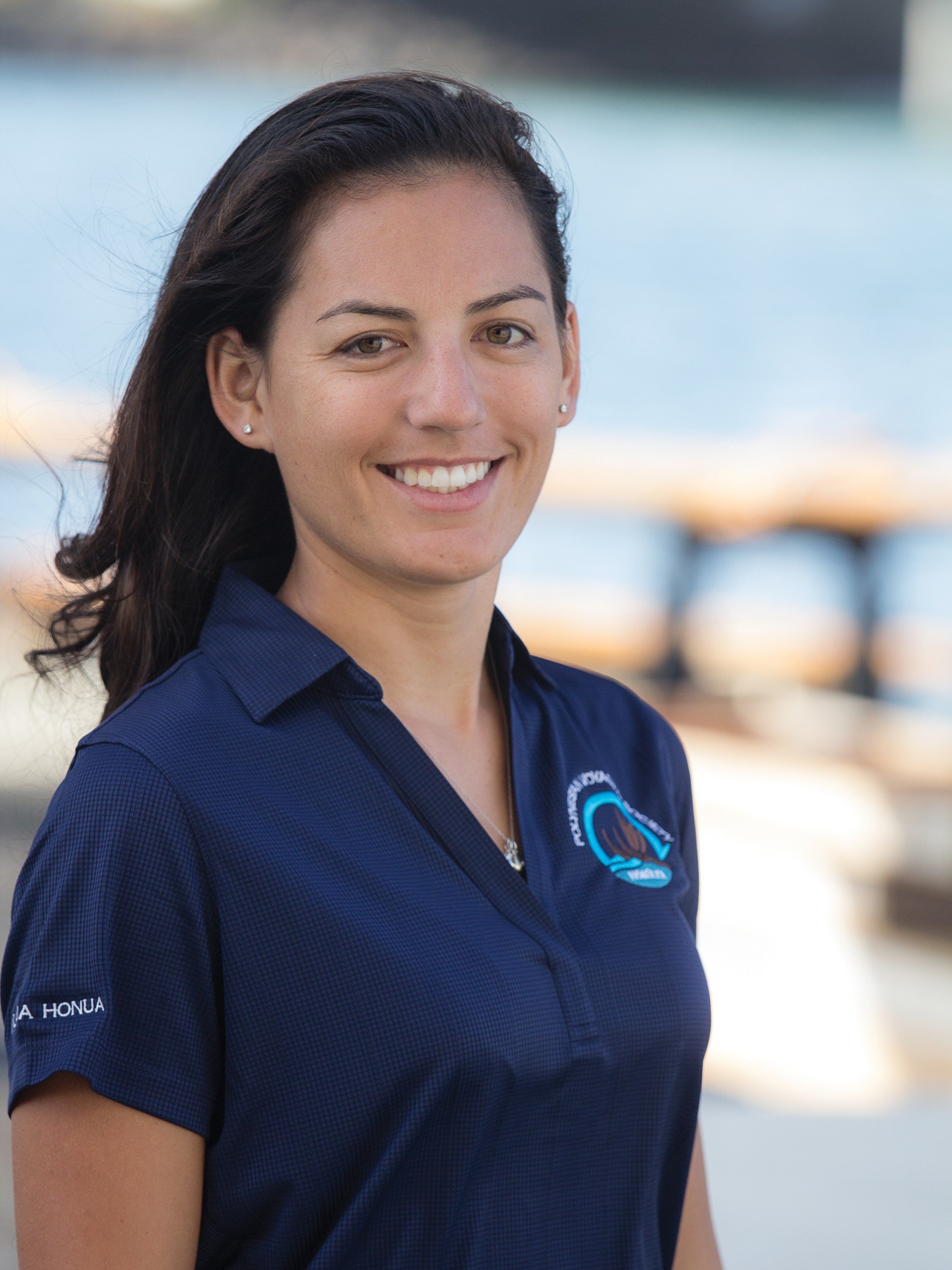 “What we did before we ever left on the worldwide voyage was to travel to all our communities in Hawaii,” says Lehua Kamalu, who’s sailed on the Hokulea and Hikianalia as lead navigator and captain. “So when we came back home, we sort of revisited that idea of going back to our communities, who really support the voyage and who are part of it and who we certainly feel are with us as we voyage around. It’s really a mahalo, or thank you, to all those people who made it so special.”

Then on Aug. 18, 2018, Kamalu took the helm of the solar and wind-powered Hikianalia as captain. Using wayfinding techniques, she traveled with a crew some 2,800 miles over 23 days to Half Moon Bay in California. Known as the Alahula Kai o Maleka voyage, Hikianalia arrived Sept. 10, 2018, then made its way down the coast to seven ports: Ventura Harbor, Channel Islands Harbor, Santa Cruz Island, Redondo Beach, Catalina Island, Dana Point and San Diego. 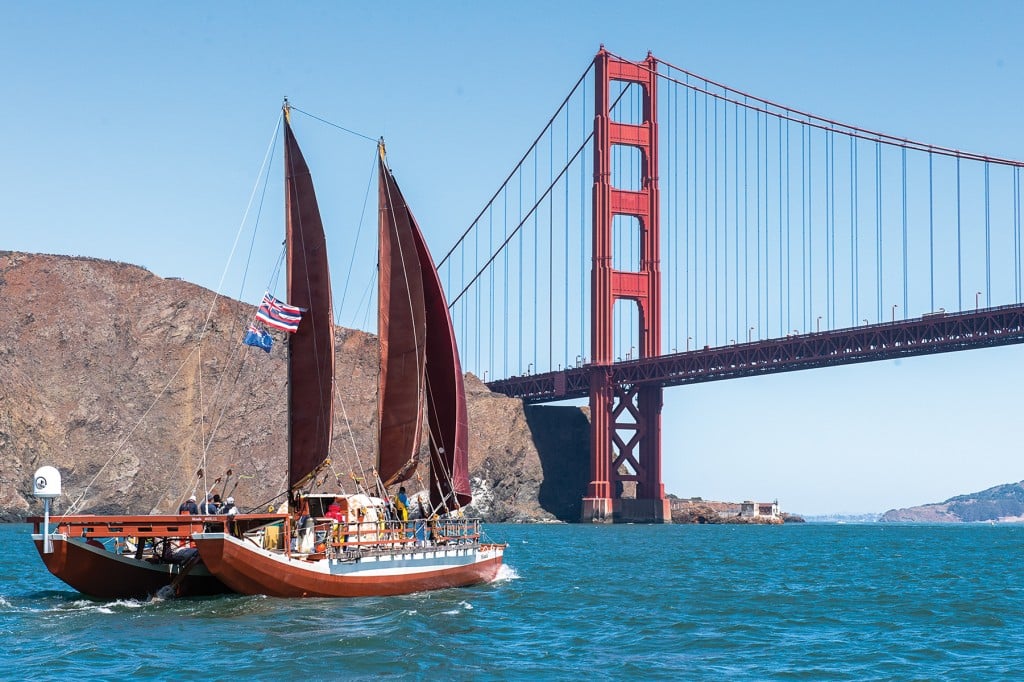 The last time a Hawaiian canoe visited California was the Hokulea in 1995, but the Alahula Kai o Maleka voyage was the first time a crew took on the challenge of actually sailing the North Pacific to reach the California coastline. On arrival, the crew was overwhelmed by the outpouring of support from the many people from Hawaii, now living on the continent, who welcomed them—in some cases, with more than 70 outrigger canoes.

“We have an extremely large community of folks who are from Hawaii, who are Native Hawaiian, who are very much interested in Hawaiian arts and practices, and who I know have been waiting for many, many years for us to come back,” says Kamalu.

At the various ports, the crew met with a total of roughly 12 school groups and talked about wayfinding, the canoes, seamanship and the history of the Polynesian Voyaging Society. 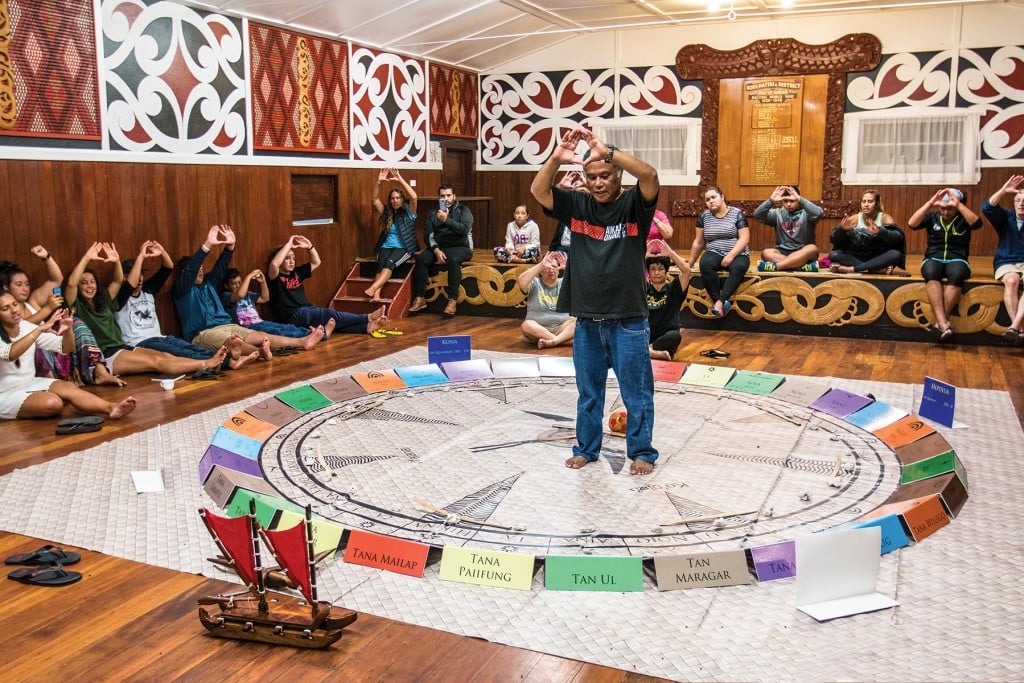 “We did that during the day with the students and kind of interacted with them, and then at night, we opened the presentation to the community,” says Mark Ellis, captain and apprentice navigator, who sailed Hikianalia from San Francisco to San Diego. Not only did the crew meet with students and the public, but they connected with indigenous communities and businesses in California, too.

Seeds of the Future

Communities come together to give a slice of the west side a new life.

It was a sight to see: more than 100 people of all ages, clutching at one long strip of black weed cloth high atop the peaks of the Waianae mountain range on a sunny Monday afternoon. As one, they were angling for just the right way to stretch the cloth, which would help stop aggressive invasive weeds from spreading across a grow bed of plants installed just that morning. And as one, they had planted the beginnings of a new era for this historically deforested region—a beginning that would, hopefully, see a resurgence of now-scarce native botanicals that would heal the scorched and parched land, and begin a process of environmental healing.

It was all a part of Kupu’s 11th Annual Martin Luther King Service Day, which united individuals from across the island in the common cause of giving back to the aina. The group included elementary, middle and high school students and adults hailing from a multitude of organizations, schools and neighborhoods, all coming to pour their sweat, time and energy into the future of the land. 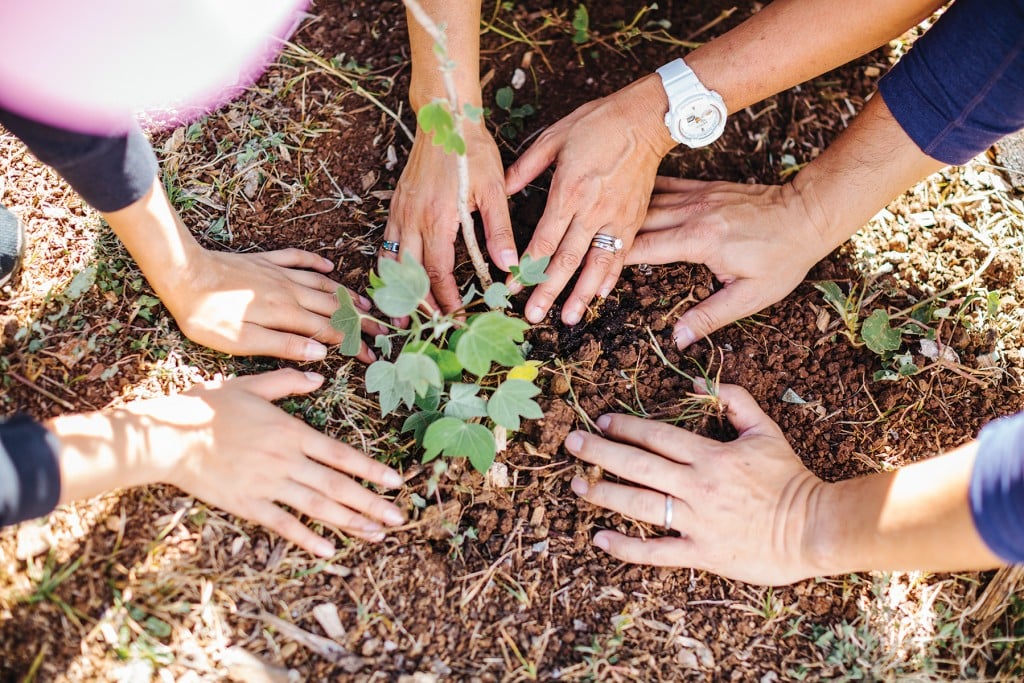 “The focus is really to bring the community together around conservation work that’s important to do, and to help out one of our partners,” explained Kupu’s executive director, John Leong. Engagement and collaboration is a key part of the Kupu model, which puts a heavy emphasis on partnerships with other organizations that are also fighting for conservation and a better Hawaii. While Kupu has a bevy of programs on its own plate—from conservation efforts to programs that help underserved youths to succeed—it’s the collaboration with other organizations that really helps it maximize efforts all around. (And, look for an uptick in those collaborative efforts soon. Kupu’s latest project is a brand new education center off Kewalo Basin that features classrooms, an outdoor recreation area, spaces for meetings, and even a commercial kitchen, making it the ideal space for Kupu and its partners to engage and host the community.)

For this year’s MLK service day, Kupu worked with three longtime partners. In addition to joining forces with Hawaiian Electric as a sponsor for the event, Malama Learning Center, a west side nonprofit focusing on sustainability and conservation, was spotlighted and Camp Palehua was the work site. Nestled in a scenic, wild spot in the mountains of Kapolei, many folks might not even know it’s there. And despite the beautiful location, it’s suffered its fair share of ecological damage, leaving plenty of opportunities for planting and reforesting with native, sustainable plants. 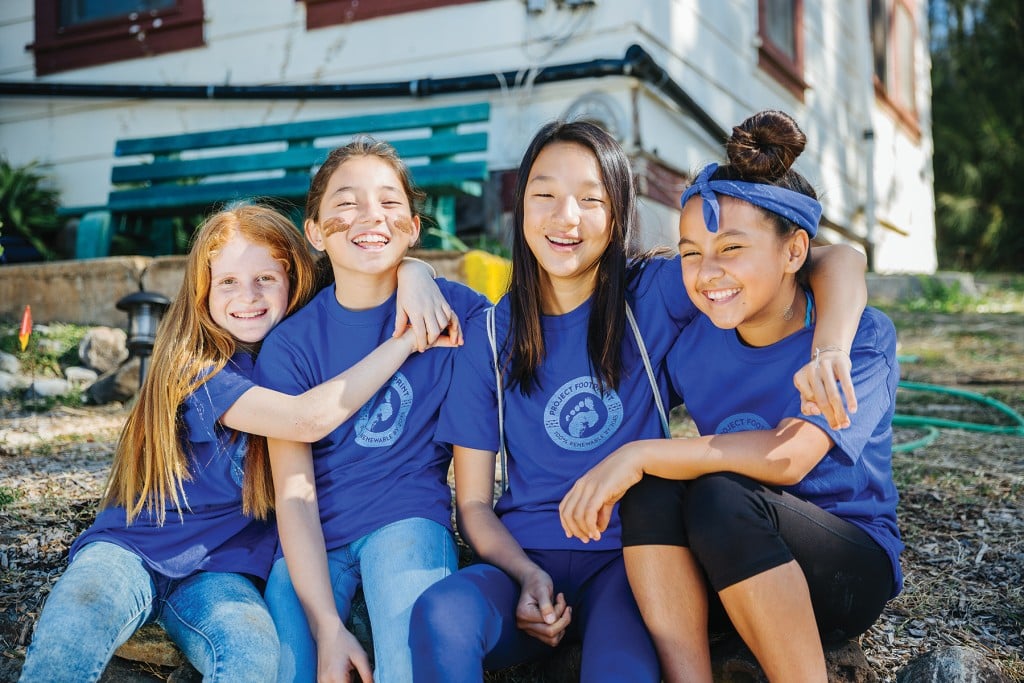 AJ Halagao, of the Hawaiian Electric Industries Charitable Foundation, brought his son Jordan and his sixth-grade class from Hanahauoli School. “It’s important we all find a way to serve,” he says. “Being with your children, having them learn more about native plants, and what they can do to make Hawaii better and along the way, reduce our carbon footprint … I think it was great sharing that experience with them.”

That experience included invasive species clearing, plant restoration and beautification of the campsite, spearheaded by the experts at Camp Palehua, which focuses on creating a community network grounded in cultural education and conservation work, and Malama Learning Center. In this area, “most of the native plant forests will be at the tippy top of the mountains, where people don’t live,” says Malama Learning Center’s executive director, Pauline Sato. “We’re trying to reverse that.” One of the center’s goals is to make those native plants, which have been lost to the Ewa region for generations, once more visible—and once more a part of the community’s family again. 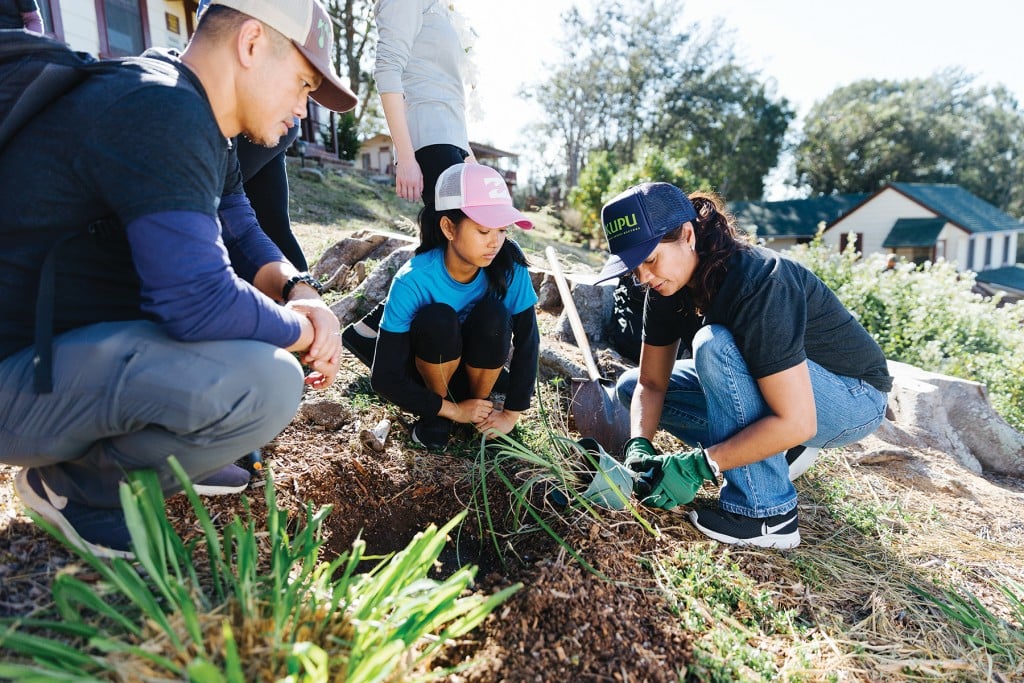 It’s a lot of work, but 100 extra pairs of hands on Martin Luther King Jr. Day certainly helped. That meant 100 more people clearing out the tangle of invasive plants, and planting new, indigenous ones, which were purchased or grown in Malama Learning Center’s Kapolei High School nursery. “We’re making conservation and caring for our environment more relevant to people, and helping them understand that it’s everybody’s responsibility,” Sato explains. “I emphasize to the group that it’s not really one day that will solve the issues—we have to do it every day. But this is a way for everybody to learn something new and be part of the solution.”

At Camp Palehua, the beginnings of that solution are visible, thanks to the efforts of the volunteers. The plants went into the facility’s newest Hawaiian garden, and include everything from flowering pikake and puakenikeni to be used in future lei-making workshops, to mamaki for making tea for campers. Aweoweo and ilima plants that are native to these ewa-side areas, were also specifically included, says operations manager Paoakalani Montgomery, who points out that the MLK Day participants can feel like they contributed to a lasting legacy. 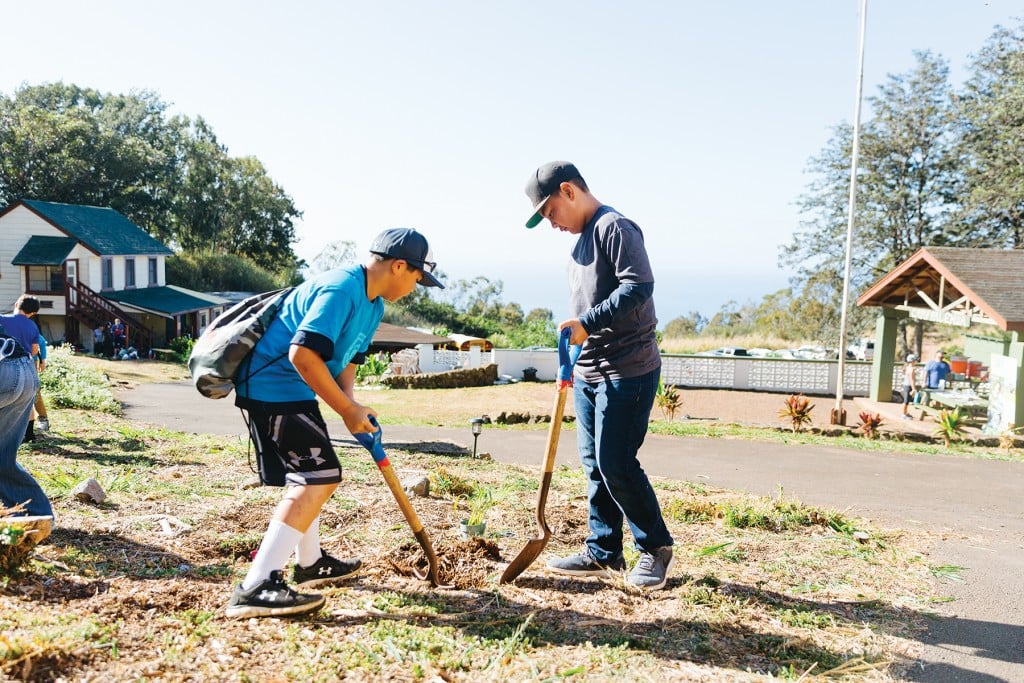 “To come back in 15 years and say, ‘I’m the one that planted that, we planted that tree’—it was really to get folks to feel a connection to this place, to understand the history and to give them a chance to make an impact of their own.”

In the end, that’s what the day of service is all about. “The biggest thing is not just what they’re doing that day; it’s about bringing the community together around something bigger than themselves,” explains Leong. “(We’re) trying to plant the seeds of service in the hearts of the participants. That’s why we do it.”

Lessons Learned from a Land Preserved in Time

Manoa Heritage Center teaches how sustainable practices from the past can be applied today.

In the lush valley of manoa, kukaoo heiau sat for nearly a thousand years overlooking a patchwork of wetland fields that grew kalo (taro), banana and sweet potato. Today, however, the fertile valley has been replaced with a suburban neighborhood, and the heiau (temple), would have been lost to time and developers if not for the foresight of Mary Cooke and her late husband, Sam, founders of the Manoa Heritage Center.

Dedicated to promoting an understanding of Hawaii’s cultural and natural heritage, Manoa Heritage Center was founded in 1996, its 3.5 acres serving as a living classroom. It features the heiau, which was restored by Hawaiian dry-stack mason Billy Fields, gardens of native and Polynesian-introduced plants and the Cookes’ 1911 Tudor-style family home.

“You could probably fit eight houses here, so it could have been just another tightly jampacked neighborhood, but Mary and Sam worked really hard to use their resources wisely to make sure that it would be available as an educational center,” says Jessica Welch, executive director of Manoa Heritage Center. “Mary wants other people to come and be inspired so they’ll go off in their communities and do the same.” 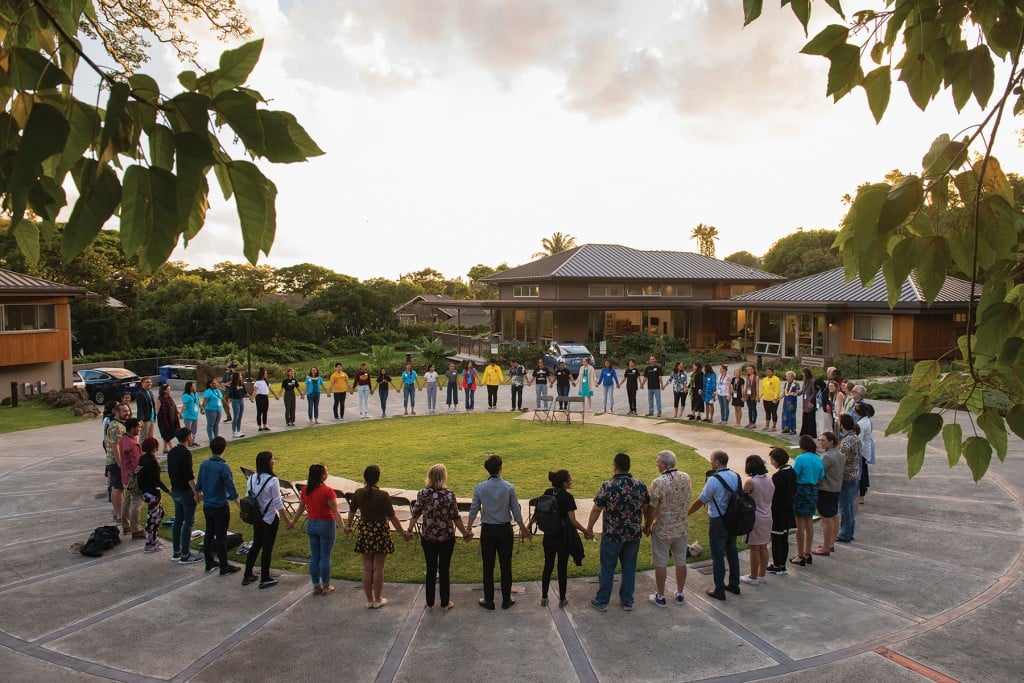 Public tours are by reservation only and take visitors around the property to learn about the Cooke family, as well as Manoa Valley’s geology, history and moolelo (legends). “We talk about stewardship and the ahupuaa system (land division usually extending from the uplands to the sea) and how it was sustainable and how you can learn lessons from that and apply them to modern times,” says Welch. One such lesson comes in the form of an endemic plant from Kauai, the Munroidendron, which is on the verge of extinction. It’s no longer known what its Hawaiian name was. “Not only is it an amazing plant but we use the plant and the fact that it doesn’t have its Hawaiian name as an example of what can be lost,” says Welch.

Manoa Heritage Center is also an important resource for schools and educators through its in-depth aina-based programs, teaching biocultural diversity and sustainability. And the heiau, along with the cultural history of the Hawaiians who lived in Manoa Valley hundreds of years ago, is the foundation for it all.