After Hurricane Iniki, the hotel’s owners – then Wailua Associates – never reopened the property. Others tried over the years, either to open it as it was, or to turn it into something else.

Kusaka says everyone wanted to return Coco Palms to its glory days, including herself. When she was mayor from 1994 to 2002, people would take pictures of the closed gates. “They’d always ask, ‘When is the Coco Palms going to be opened?’ or ‘My parents got married here’ or ‘My parents honeymooned here’ or ‘I came here as a child.’ It brought back so many fond memories for many people.”

She worked as a consultant with two people who were interested in the hotel. One was Richard Weiser who formed Coco Palms LLC. His company, The Weiser Cos., and Petrie Ross Ventures later formed Coco Palms Ventures LLC as a joint project and purchased the property in 2006. The idea was to turn the property into a condo-hotel with a full-scale fitness spa. That effort was abandoned when the spa plans were denied and the group lost its funding for the project, Kusaka says, and the property was put up for sale. She later worked with developer Patrick Duddy, who wanted to return the hotel to its pre-Iniki state. His team unsuccessfully made an offer on the property, she says. Then Coco Palms Ventures’ permits to demolish and rebuild the hotel were revoked in 2013 after the county had not seen enough progress. 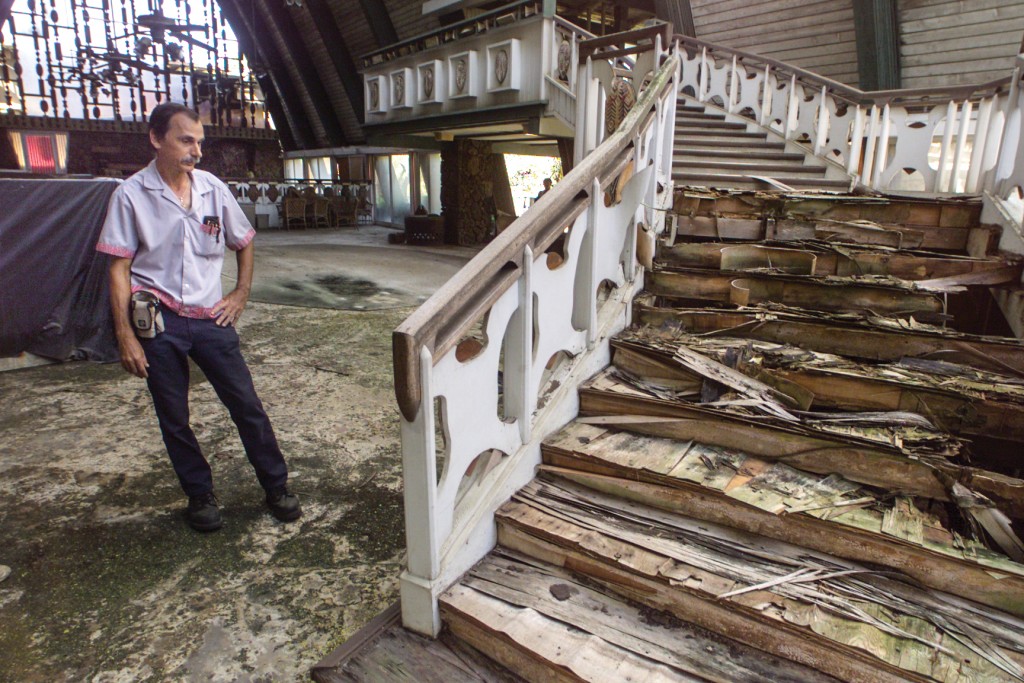 The Coco Palms was left in shambles by Hurricane Iniki. This is what was left of the lobby. | Photo Courtesy: Honolulu Star-Advertiser

According to Costa, the age and condition of the resort posed a challenge for those interested in rebuilding. He says the property was neglected between 1969 and 1985 when it was owned by Amfac, which was busy building other hotels. He remembers touring the property in the late 1990s with Jim Reed of Lincoln Consulting Group LLC, who was interested in rebuilding the resort. At the time, Costa worked with Sunterra Resorts, a time-share developer. The other challenge, he says, was building a first-class resort across from the beach, a major sales point for visitors, with a highway between them.

Dahilig wrote in an email that another challenge is creating a hotel that fits the existing community. “The island has grown and changed since 1992, particularly in terms of population and traffic congestion. The quiet, idyllic nature of the old Coco Palms must adapt to a new reality,” he wrote.

In 2007, a community group called the Friends of Coco Palms formed to acquire the property, but not rebuild the hotel.

“We decided that maybe there was a way to create a plan for the property that would be largely for public benefit, with some sources of revenue, ongoing revenue, to support the project,” says Jennifer Luck, who was part of the group as a representative of the Kaua‘i Public Land Trust, which later became the Hawaiian Islands Land Trust. The plan was to contract with a consulting firm that could help lead the community through a planning process to create an acquisition and demolition plan.

The group had successfully applied for a $234,000 grant-in-aid from the state Legislature in 2009 and, later, a $276,000 grant in 2013 to put the idea into motion; however, the monies were never received due to the Great Recession and the property later going into escrow with the current owners.