Our Best-Read Stories of the Year

Our December print issue is the time we look back at the previous 12 months and rank our most popular stories on our website, in our Today’s Hawai‘i News email newsletter and on our social media.

Here at the top 15 stories at hawaiibusiness.com, based on page views through Oct. 31:

We also ranked the most popular stories in Today’s Hawai‘i News, our free twice-daily newsletter summarizing the top local news stories of the day. (Subscribe at hawaiibusiness.com/newsletter.) Each summary links to the original reporting from one or more of a dozen news sites and we counted the number of readers who clicked through to read the full story.

The most popular one-day news story so far this year was about Katherine Kealoha’s affair, which broke on Jan. 3 and was covered by Hawaii News Now and the Honolulu Star-Advertiser. The news sites split the 1,355 clicks from Today’s Hawai‘i News.

The story so far this year with the most clicks to a single article was a Honolulu Star-Advertiser piece about the state’s new crosswalk law, which took effect July 1. It garnered 1,053 clicks from Today’s Hawai‘i News.

Four stories about the Kealoha scandal were among the top 15 stories as measured by click-throughs so far this year.

There have been a lot of different stories about the Mauna Kea blockade but no one story made it near the top of this year’s list. However, in the first week (July 15-19) of the blockade, Mauna Kea stories totaled 3,577 clicks.

Other popular stories in Today’s Hawai‘i News so far this year: 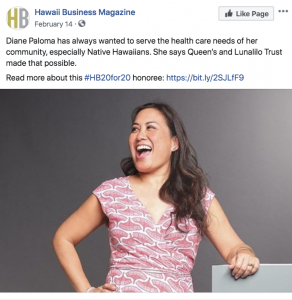 Our most popular post on Facebook so far this year was tied to our 20 for the Next 20 profile of Diane Paloma in the March issue: Its impressions/reach was 6,610 and it was liked, shared or commented on 2,257 times. 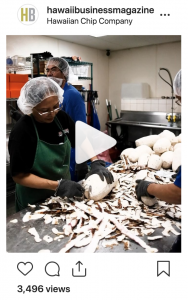 No. 1 on Instagram was a video shot by Aaron Yoshino at the Hawaiian Chip Co. to accompany our January issue Parting Shot photograph: 6,915 impressions/reach and it was liked, shared or commented on 561 times. 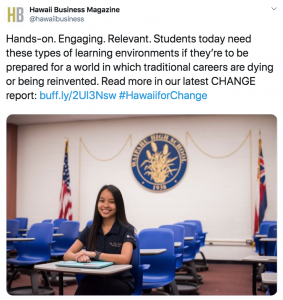 Our No. 1 post on Twitter was tied to our CHANGE Report on Education in March issue, written by staff writer Noelle Fujii-Oride: 6,261 impressions/reach and it was liked, shared or commented on 2,257 times. 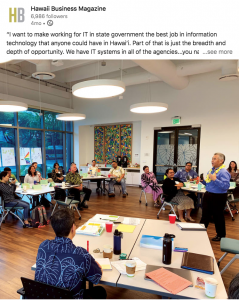 Leading on Linkedin was a post tied to our CHANGE Report on Government & Civic Engagement: 3,017 impressions/reach and it was liked, shared or commented on 177 times.

What’s Next for ProService: “Refounding” the Company